What Does It Mean to Give the Gift of Life?

We captured the experiences of ordinary people caught up in the life and death struggles of Canada's transplant system. Niobe Thompson

Since organ transplants became a medical reality in the 1950s and 60s, there have been many documentaries about transplant science. But in my view, none have taken us where we most need to go: inside the experience of the donor and their family.

MORE:
Watch Vital Bonds on The Nature of Things

This is where the heart is torn apart, where the tragedy at the core of transplant medicine lies, and where small groups of people take the decision that makes the chance of a second life possible.  Every year, we spend millions of dollars and engage thousands of doctors and nurses to save the lives of organ recipients. That is the side of the story we see. But what does it actually mean to give the gift of life?

Canadians are often uncomfortable with organ donation because they lack knowledge. Few of us have any understanding of the people whose fate depends on the availability of organs, and even less of the medical processes involved. Unless it has happened to us, none of us understand what it means to sit with a doctor and offer the organs of our loved one. This world is tightly closed to us, wrapped in regulated privacy.

Yet I am convinced that only by finding a way to open the door on the reality of organ transplants can we confront this part of modern life with understanding. At the University of Alberta Hospital, we found a door inside.

This level of access is unique, and would normally be impossible in North America. But after years of negotiations with Alberta Health Services, Producer Rosie Dransfeld, and later I, gained the trust of the hospital directors, intensivist doctors, surgeons and nurses who form the backbone of the transplant system in Edmonton. Working on the basis of “informed consent”, we were able to rely on those frontline staff to introduce us to the patients whose stories would become the narratives of the film.

SCENE FROM THE FILM: Baby Bergen gets a new heart.

I was trained as an anthropologist, and I found this background critical over the months I spent shadowing doctors and observing transplant surgeries at the hospital.  To know how to insert our film crews into the action, I needed to understand how the pieces fit together: how intensive care intersects with organ retrieval, how families reach the point of deciding to donate organs, how organ recipients slowly (but sometimes very quickly) move through the system and come out the other side with a new organ. It was a very long time before I felt confident bringing a film crew to the hospital. 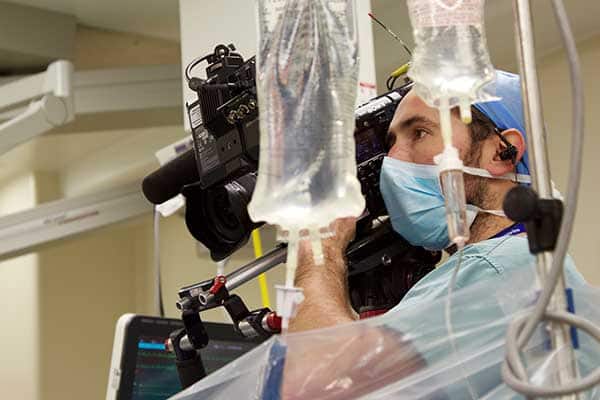 When filming began, we had a large group of cinematographers, sound recordists, and production assistants on 24-hour standby. Transplant medicine is a 24-hour a day system, and our film crews had to be ready. I moved into my own basement, two floors away from my family, and slept with my mobile phone. As expected, we soon found ourselves racing to the hospital at all hours of the day and night.

In comparison to the stories you will see in the film, there were many more patients and families who declined to participate. We expected this, and my own method was to approach a potential character in the hospital, briefly introduce our project and its aims, and withdraw if I met any discomfort or hesitancy. I understood that people are at their most fragile and vulnerable when they or their loved ones are admitted to hospital.

VIDEO: A mother makes the difficult decision to donate her son's organs

But I also believe it was ethical to ask patients to be filmed. At difficult as these discussions were for them, and for me, I knew that our film would change lives. There was a greater ethical duty to capture the experiences of ordinary people caught up in the life and death struggles of a transplant system.

The most important story in Vital Bonds is that of a 28-year old boy admitted to hospital with a traumatic brain injury. I met Matthew Babchishin and his wonderful family in the intensive care unit, and they immediately opened themselves to our film crew. It is to people like the Babchishins that we owe an immeasurable debt of gratitude. As they were confronting a tragedy from which they will never heal, they somehow understood the beautiful gift they could give by sharing their story. I hope that gift is not lost on Canadians – I hope Matthew’s parents inspire us. They certainly inspire me.