Every generation, we feel like we’ve reached a pinnacle; skated the fastest or jumped the highest or thrown the furthest, and then the next generation always surpasses it. Like any human endeavour, sports evolve. Science and technology provide better gear, streamlined clothing, even better-designed play surfaces and tracks. How much difference does technology make?

In The Nature of Things doc, Champions vs Legends, we put that question to the test. We had Olympic medalist speed skater Christine Nesbitt put on a pair of 1960s replica skates and trade her aerodynamic bodysuit with the woollen onesie of the time. After a quick warm-up, she’s off.

“Christine’s race on those old skates was super exciting. She went out there, she absolutely nailed it,” remarks Steve Haake, a sports scientist featured in the documentary. Coming in at just under 1:35, Artamonova’s best, on unfamiliar blades was a remarkable achievement and a testament to Nesbitt’s power as a champion.

Technology is changing the face of sports performance. From faster skates to lighter shoes, advances on the track, at the rink and in the pool are helping athletes become faster, better, stronger. But that’s the technology that we can see during the competition. Athletes are also using technology behind the scenes as they train to sharpen their competitive edge. Here are a few examples now being used by sports stars.

Using technology to rate an athlete’s performance isn’t new, but now, data can be gathered from smart clothing and tracked in real time by a mobile phone. 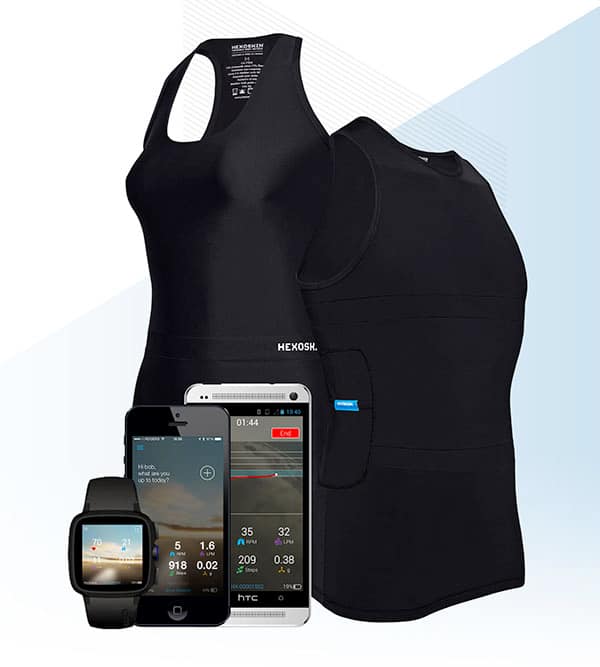 Canadian smart clothing company, Hexoskin, worked with gold and silver medalist freestyle skiers Chloe and Justine Dufour-Lapointe during the 2014 Sochi Winter Olympics. Wearable Bluetooth vests tracked vital signs like heart rate, breathing and VO2 max. “Having this feedback during their competition also helps me to have a better comprehension of the demands of their sport and modify if needed their training preparation, and I can do this from anywhere,” said Paul Gagne, one of their coaches.

Using Hexoskin, the Dufour-Lapointe sisters’ trainer was able to see that one of them was not breathing during her jumps. With this knowledge, they were able to adapt and gain centimetres on her jumps, which accounts for 20 per cent of the overall score. Justine went on to take the gold, her sister the silver in moguls.

There is now a wealth of products on the market to help athletes track their performance and provide useful analytics. This information can help understand the overall wellness of an athlete, says Greg Wells, a sports scientist at the University of Toronto. “It’s pretty impossible to compete at an international level when you’re sick, when you’re burned out, or when you’re overtrained,” he told The Financial Post.

Smart clothing is becoming such a game-changer, the concept is going mass market. For the price of a FitBit, why not just wear a piece of clothing that can do a better job?

Tech training for the brain

How about tech training for the brain?  Pro athletes are turning to a video game to sharpen cognitive skills.

Montreal’s NeuroTracker was inspired by Lumosity, a wildly successful brain-gaming app. Jocelyn Faubert, who developed the game, calls it “gymnastics for the brain,” Athletes watch yellow spheres, like tennis balls, as they bound across a 3D screen. Although they don’t look anything like a player hurtling down the field or a puck skidding across the ice, the program is being used in hundreds of elite training facilities around the world.

The Vancouver Canucks were an early adopter of the technology and first used the tool during its 2010-11 season — they found a 16 per cent increase in their overall performance metrics. Goalie Richard Bachman says, “I use it as a warmup for my eyes, just to get my focus and concentration going.” With a pair of 3D glasses, athletes can practice anywhere. “We set ours up right next to the training room,” Leonard Zaichkowsky, former director of sports science for the Canucks told the New York Times.

NeuroTracker has become so successful that researchers are studying it for all sorts of new applications: to stem the effects of ageing, to help children with ADHD and even as a way to rehabilitate stroke patients.

The newest tech frontier for athletes training for the big event is virtual reality. Poised to revolutionize sports training, VR technologies are already helping some players improve their performance in real life.

Several NFL teams are using STRIVR (Sports Training in Virtual Reality), which allows the player to put on a headset and experience plays and formations without having to step onto the field. It enables them to hone their game without the potential for injury that comes from real practice. "Giving players more reps in a virtual environment is going to have a positive effect on their performance in the field," says Derek Belch, CEO of STRIVR.

Before the 2016 Olympics in Rio, VR pioneer Joe Chen flew to Rio and drove the entire triathlon course with a bunch of GoPro cameras attached to the hood of his car to capture it in 360. The footage was stitched together and made viewable on a Samsung Gear VR headset. Gwen Jorgesen, an American triathlete who went on to win the gold medal, spent hours memorizing the rutty streets of Rio, turning the course into motor memory. “While VR is no substitute for driving an actual course, it will help familiarize drivers with the track. It’s a head start, ” says Chen.

Simulators are also being used to help skiers prep for the 2018 Pyeongchang Winter Games. SkyTechSport has developed a system to simulate skiing in the lab. “What we’re trying to do is use virtual reality to expand the time that the athletes can spend in their field of play,” says Luke Bodensteiner, executive vice president of athletics at the U.S. Ski and Snowboard Association.

And the best side-benefit?  The technology also gives fans a way to live out their sports-star fantasies on a level (if not real) playing field.