“I've just fallen in love with who he is, what his qualities are and how he lives his life out there.”

Cheryl Alexander is an environmentalist and conservation photographer based in Victoria, B.C. In 2012, she heard some rumours that a lone wolf had arrived on a small archipelago of islands just off the coast, close to the city but far from the nearest wolf pack on Vancouver Island.

Intrigued, she set out to find him and document his life. Why did he travel so far from his home, through a busy city and across dangerous ocean currents? How does he survive on a small island without regular access to freshwater or large game like deer and elk?  And why does he live alone? Alexander has spent seven years tracking and photographing the wolf, who she calls “Takaya,” in a search of answers.

Her story is told in Takaya: The Lone Wolf, a documentary from The Nature of Things.

UPDATE: In late January, 2020, Takaya left his island home after 7 years of living alone and made the journey across the water, ending up in downtown Victoria, B.C. After being tranquillized by local conservation officers, Takaya was released in a new home north of the city. He was shot and killed by a hunter a few months later.

We have gathered a series of captivating photos of Takaya below and some of Alexander’s thoughts on the relationship she’s established with this rare and unique creature. 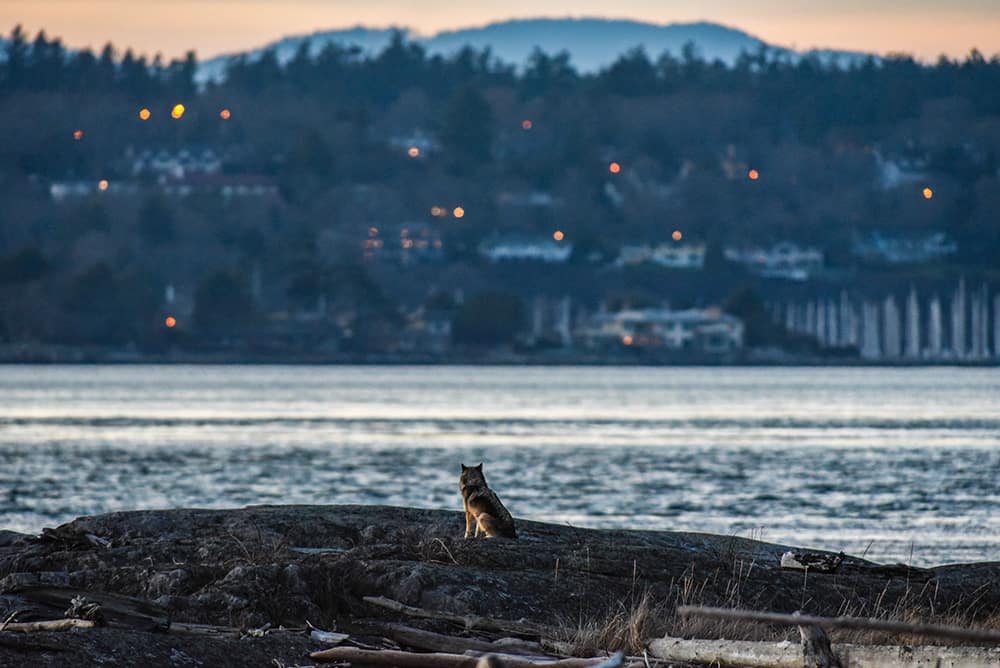 He started to howl, it was this incredible long mournful sounding howl. It was incredibly moving. 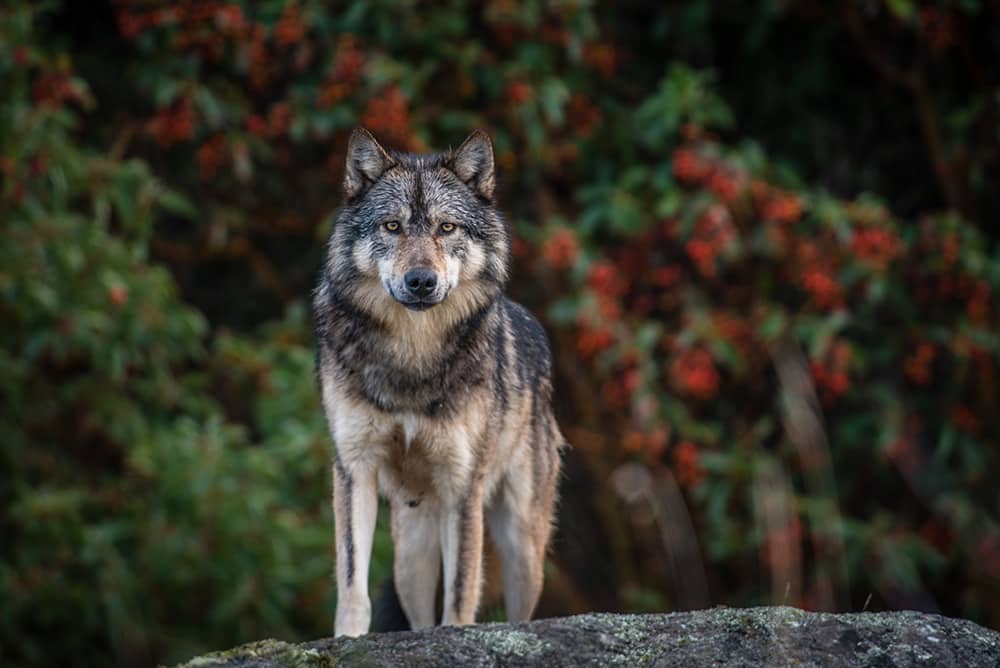 The second time, he was fairly close to me and there was a moment when I looked deeply, directly into his eyes and it was indescribable — I’ve read that looking into the eyes of a wolf is a very powerful experience and I’ve got to say that for me, it was.

Every day when I go out it’s sort of a mystery, sleuthing out, where is he? And what is he doing? 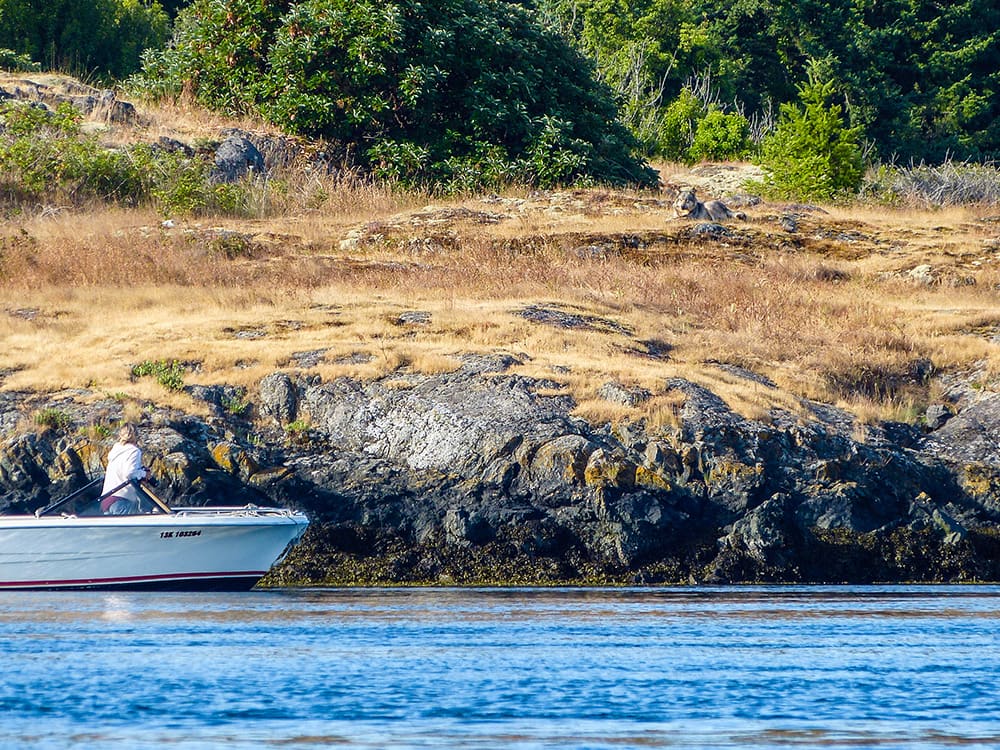 He has such a small territory compared to a wolf pack, that means I can observe him more intimately than anyone probably has been able to do before.

I've been really fortunate to be able to learn a lot about Takaya's life because he's come to trust me, he accepts my presence so he doesn't see me as a threat. 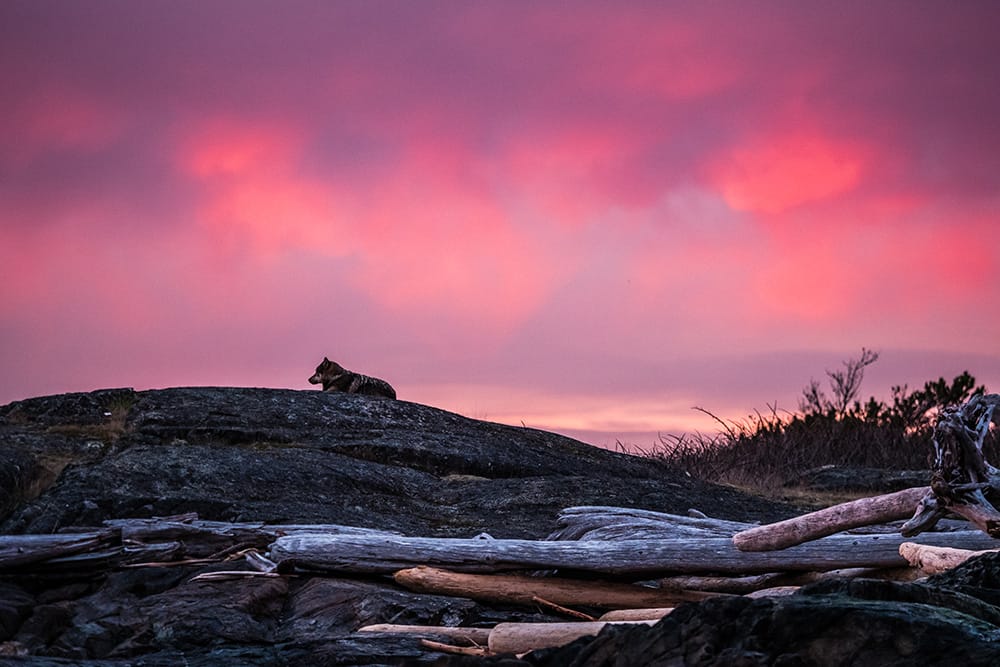 Takaya definitely has places that he loves.

Wolves are crepuscular, which means they tend to be most active at dawn and at sunset so if I can get out there early, I'm much more likely to actually see him. He really likes sunrises and he often is in spots where he can see the sunrise. 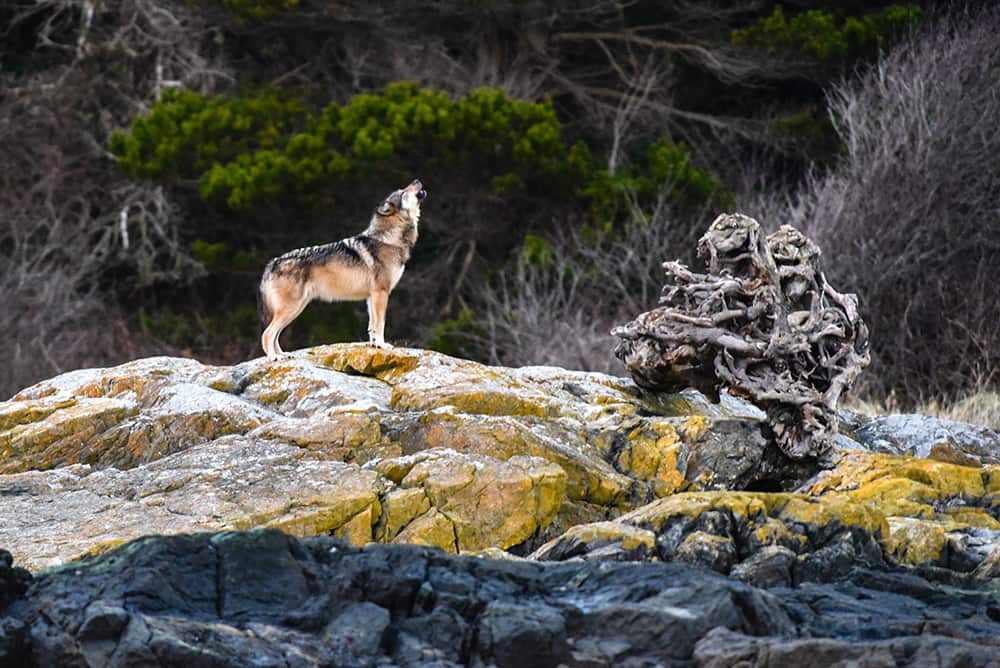 He howls frequently and he really obviously is trying to communicate to someone or to some other wolf.

I'd love to know why he howls because they are so impactful, emotionally. I'd like to know if he is lonely, does he really miss having his own kind around?

MORE:
Victoria’s lone wolf: After years of living alone, he may have a potential companion 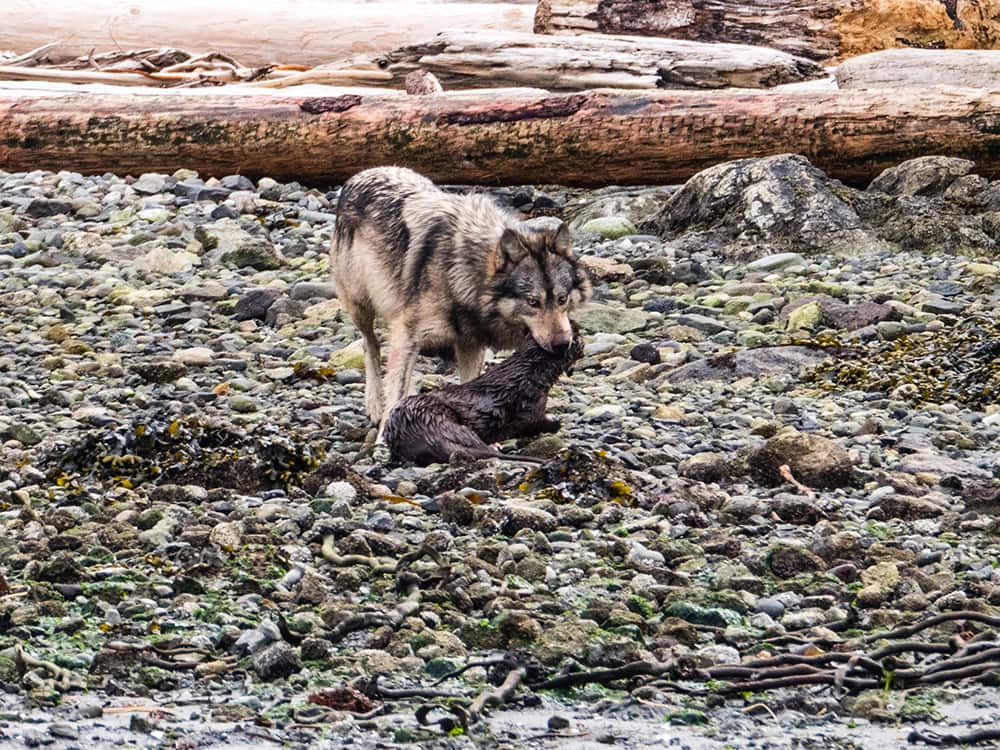 Takaya definitely had to adapt to survive in these islands. As far as I know, there are no other wolves that live almost a hundred per cent on marine mammals such as seals and river otters.

I have a lot of questions around the challenges he faced not really knowing how to hunt seal or otter or gunnel fish. I think he perhaps learned it from observing other animals. Takaya saw them hunting and realized that he actually also could use this as prey. 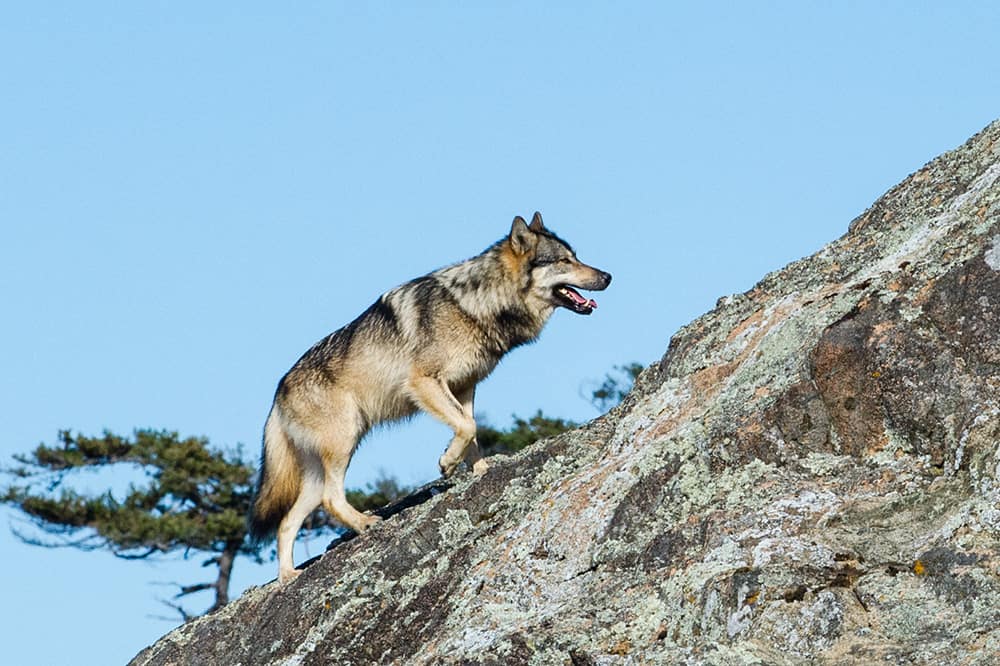 Lone wolves are explorers, they're creatures that push the boundaries of their own world and they go out on their own. They’re risk-takers, they're animals who have to learn something new and that's what Takaya has done.

He's in an ecological niche that he would not normally be in so he's pushing the limit of what his species has been doing. 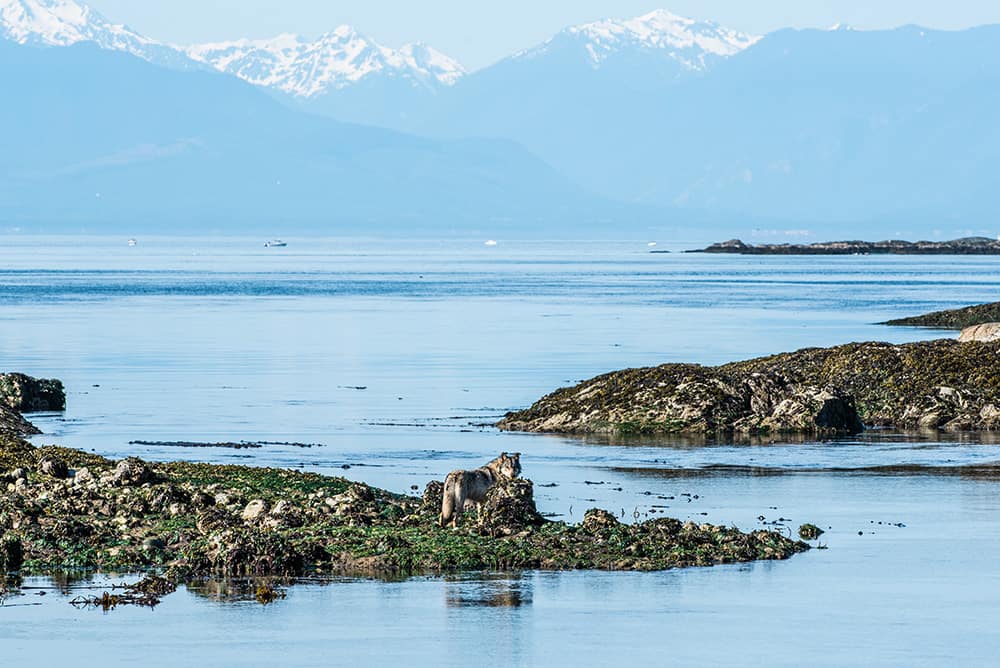 Takaya can give us a perspective on his species where we can really admire the qualities of survival and resilience and strength and tenacity and respect this creature that we need to share the world with.

He really symbolizes hope for me. That the wilderness is alive and functioning as it should. 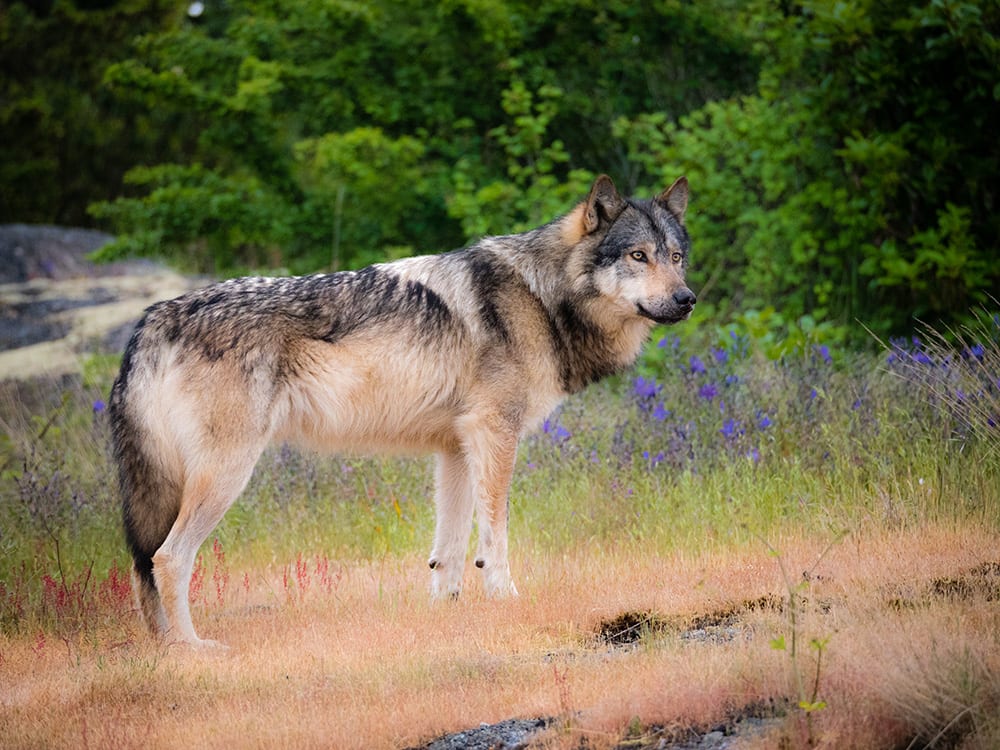 I've just fallen in love with who he is, what his qualities are and how he lives his life out there.

My life has changed quite dramatically by developing this relationship. I feel really fortunate to have had been able to have the companionship of a wild creature.

Watch Takaya: The Lone Wolf on The Nature of Things.