The Good, the Bad and The Ugly: Critters That Live In Our Homes

Our homes host over one hundred insect species. We take a look at some of our most common housemates.

Humans are an indoor species. Despite spending nearly 90 per cent of our lives under a roof, we know next to nothing about all the life that lives with us — insects: the most successful creatures on earth.

In The Grea t Wild Indoors, a team of entomologists spends a week delving into the dark crevices of a typical Toronto house, finding a whopping 112 distinct species. But they say that's no cause for concern; an insect census taken in homes all over the United States revealed that number is about average.

Here’s a look at some of the common and fascinating critters that we call housemates.

This roly-poly critter isn’t even an insect — it’s a crustacean.

More like a crab than an ant, pillbugs breathe through gills. They’re known for their ability to curl into tight balls when threatened. And a lesser-known fact about them is that their blood appears blue, which is due to the presence of the chemical hemocyanin.

Pillbugs need moisture to survive, so they’re likely to be found in your basement, avoiding the spiders that love to dine on them.

They also can be found in organic garbage where they nibble on rotting veggies, helping the composting process. They’re entirely harmless and don’t spread diseases or contaminate food.

This insect goes all the way back to the Paleozoic era. In fact, silverfish haven’t changed much in 400 million years and are found all over the world. Studies even show that they’ve been with us since we first started indoor living in the Stone Age.

They often live in our bathrooms and can make a meal of almost anything, especially our dead skin. As long as water is abundant, silverfish can live for up to a year without food.

They run very fast, can jump up to half a metre and squeeze into tiny cracks in walls.

All of this makes them very hard to kill. For such a tiny critter, they have a surprisingly long lifespan of three to six years.

They don’t carry diseases and are harmless, although they will cause damage to items like clothing, books, food and wallpaper.

Usually a garden creature, this little guy is known to sneak in under the door to escape winter's wrath. Then they'll hibernate, only waking up in the spring to search for a way outside again.

The stink bug has a not-so-secret weapon for dealing with predators — a blast of noxious, smelly gas. You might even catch a whiff of it when you step on one underfoot.

Harmless to us in the home, stink bugs do cause a threat to crops or gardens, where they’re often found.

The name 'centipede' means '100 legs,' but studies show that these insects can have anywhere between 15 and 177 pairs of legs, one pair for each body segment.

All these legs come in handy. When they find themselves in the grip of a predator, they often leave behind a few, making a fast escape (they run the human equivalent of 67 km an hour) and regenerating new ones later.

SCENE FROM THE FILM: A spider has its sights set on a house centipede for dinner.

They come out at night, so we rarely see them, and they love to live in damp areas like basements and bathrooms.

They have poisonous jaws that they use to inject venom to kill their prey. But don't worry — their jaws are not strong enough to puncture human skin.

You might want to leave them around, as they’re great at killing other bugs. In Japan, they’re known as 'gejigeji' and are even sometimes kept as pets.

Not officially insects, springtails are more like insect cousins. They’re subterranean and like to live in the dirt, or behind damp walls in the kitchen or the bathroom.

What they can do, however, is leap nearly 100 times their height in a single bound like a kind of Superman bug.

Cellar spiders love to spin trip lines all over your basement to catch their prey. Once they trap a meal, they flex and extend their eight long legs so fast they become a blur.

Thankfully, we have nothing to fear from these spindly creatures as their jaws are too small to bite us.

They’re excellent trappers and, like centipedes, get rid of many household insects that we don’t even see.

A weevil is a small insect with a big snout, called a rostrum. These little critters belong to the order Coleoptera (beetles). Did you know there are 45,000 kinds of beetle, making them the largest order in the animal kingdom?

They prefer the garden but sometimes come inside to shelter from bad weather.

Often they hide in the insulation behind walls without even being seen by the homeowner. Sometimes adult weevils will be found in the pantry, scarfing down nuts, seeds and grain products.

They’re not harmful to humans and can even be eaten along with any food they’ve infested without any harmful effects. Consider them an extra source of protein! 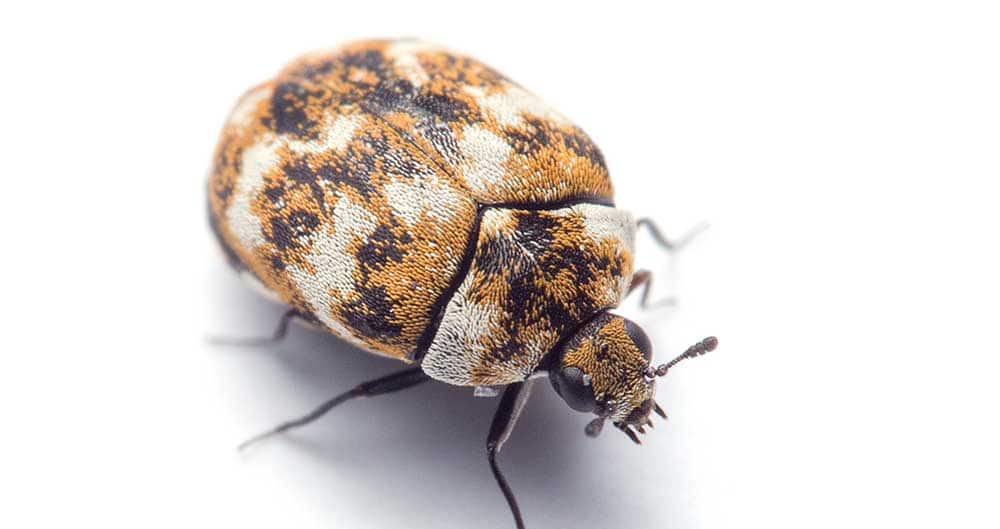 Getting bitten at night? You might not have bed bugs — the culprit could be the carpet beetle. They’re smaller and attracted to natural fibres like those in wool blankets, pillows, and upholstered furniture. They're also attracted to us as we exhale carbon dioxide during sleep.

Believe it or not, they don’t bite. Their prickly little hairs cause an allergic reaction that, in some people, happens to look like bed bug bites.

While the thought of them snuggling up to us at night isn't appealing, they're not harmful. However, they can cause some serious damage to your belongings, so it’s a good idea to evict these little tenants as soon as possible.