Simple ways to reduce your exposure to air pollution outside

Close your car’s windows and plan your route to avoid major roads Leif Kaldor, director Something in the Air

According to the Energy Policy Institute at the University of Chicago, air pollution reduces life expectancy for people around the world more than drug use, AIDS, malaria and even smoking — and by an average of 1.8 years per person.

Something in the Air, a documentary from The Nature of Things, shows that air quality can be unhealthy and yet totally invisible. So what can we do to protect ourselves?

Here are some simple changes that can have a large effect on the quality of air you breathe and your health.

Close the car’s windows and recirculate the air

Many Canadians spend a lot of time driving, surrounded by exhaust from cars. In Something in the Air, researchers travelled on L.A.’s infamous freeways with a monitor measuring ultrafine particles — dangerous and incredibly small bits of traffic exhaust.

But opening the windows to let the air blow in resulted in the most hazardous change. The level of particulate matter inside the car went up to more than ten times the original level.

Avoid the uphill side of the road

Barbara Maher, a researcher in Lancaster, England, has changed her habits because of her work studying air pollution. “Look for anything that can reduce your air pollution dosage, day in and day out,” she says.

Maher now walks on the downhill side of the roads when possible, rather than the uphill sides. As vehicles work harder to climb hills, they put out more air pollution. Given the option, she chooses to stroll where the air is cleaner.

Maher also drives to work on a route that’s a bit longer but has less traffic, and keeps a practical distance between herself and the next car. “If I do drive in the city, you’ll never find me tucked up behind somebody’s exhaust pipe,” she says.

Use masks outside where air quality is poor

In places where the overall air quality is unhealthy no matter where you are, many people opt to wear masks. In parts of Asia, masks have become so prevalent they’ve turned into fashion statements, with people wearing many different colours and patterns.

But do they really work? The short answer is yes. Even a basic mask, such as those worn in hospitals, can reduce the amount of particulates getting through. That said, while professional masks can remove more than 90 per cent of particulates in the air, they must be fitted properly to be effective.

Car exhaust contributes to pollution everywhere, so you should always turn your vehicle off when stopped for both your community’s sake and your own. The city of Toronto already has a by-law which limits the legal idling time to one minute per one-hour period, and other cities across the country have introduced similar laws and idle-free zones, as well.

Rethink your bicycle route to work

For many people who live in cities, biking is a healthy form of transportation. Studies have shown that even in urban environments, the benefits of biking may even outweigh the risks of exposure to air pollution. 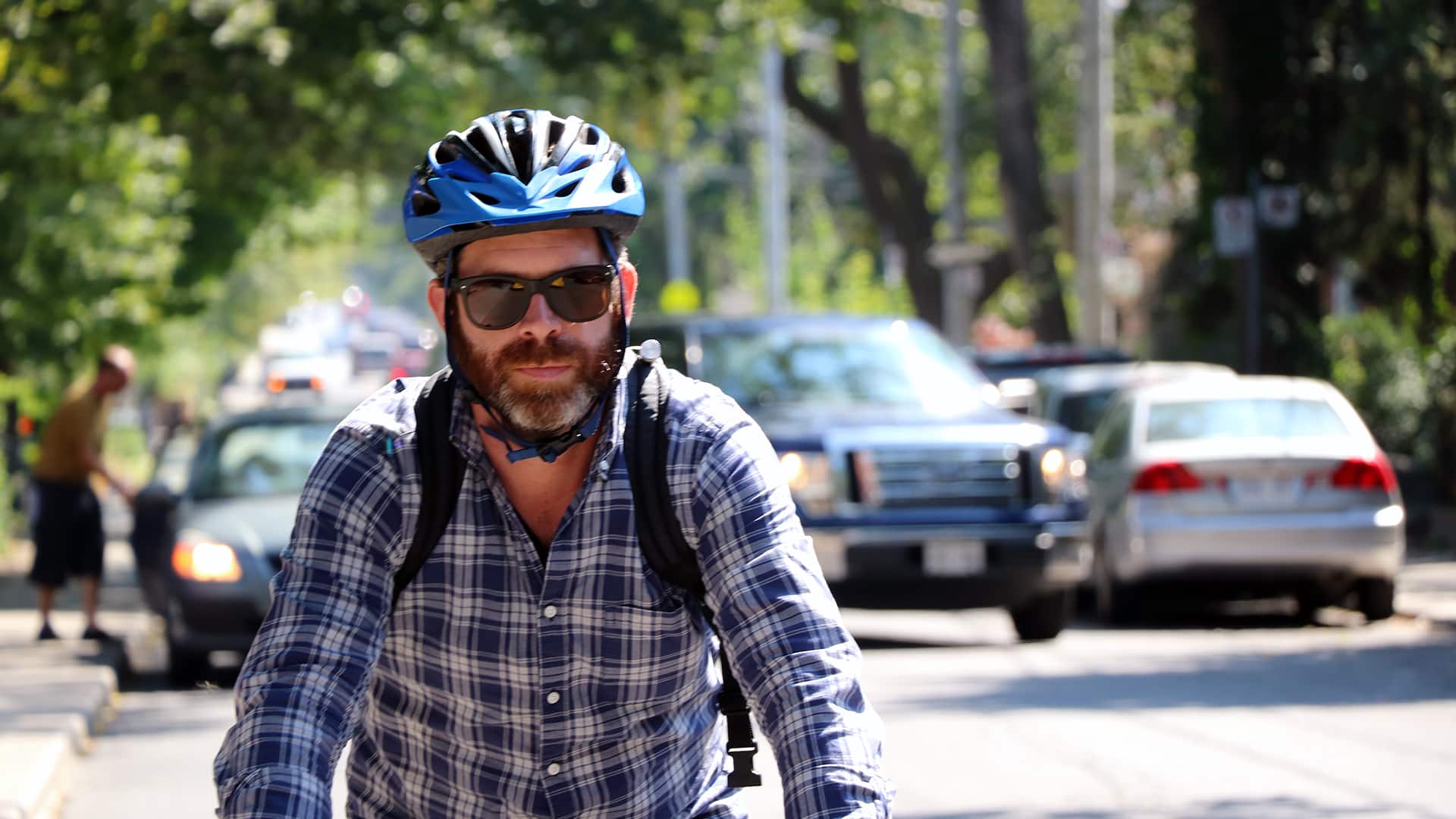 Toronto resident Keith Brooks on his way to work

Unfortunately, most bike routes follow larger roads where there’s still a significant amount of traffic exhaust to contend with. As seen in Something in the Air, taking side streets that aren’t as busy or timing your trip to avoid rush hour will lower your exposure to exhaust and make your commute even healthier.

“It’s always better to make informed choices than uninformed choices, so if you’re in doubt about what you’re exposed to, it’s better to find out,” says Keith Brooks, a cyclist who used a portable air monitor from the University of Toronto to learn more about the air quality on his commute into the city.

MORE:
Three unexpected ways that air pollution may affect our bodies
Smart tools track air pollution around the world and where you live

To get more information about using smart technology to monitor air quality, visit the Something in the Air website.

Watch Something in the Air on The Nature of Things.