As an underwater photographer, cave diver and writer, I enjoy telling stories about our changing Earth. In 2017, as explorer-in-residence at the Royal Canadian Geographical Society, I led Arctic on the Edge, a project that documented the life cycle of sea ice in Canada’s North.

While following the path of enormous icebergs from Greenland to Baffin Island and down the coast of Labrador and Newfoundland, I began to see the ice itself as a complex organism quickly moving toward extinction. Scientists suspect that the Arctic Ocean will be free of summer sea ice in my lifetime, and that inevitability may come sooner than we think. Each photo that I take might one day be viewed in a gallery of mass extinctions.

I arrived in Ikpiarjuk (Arctic Bay) with my colleagues to film Under Thin Ice, a new documentary from The Nature of Things, in the spring of 2018. Approximately 700 kilometres north of the Arctic Circle, the community is surrounded by towering red cliffs on three sides. The surrounding glaciers carved this region, leaving deep valleys and steep fjords, and offering a home to nomadic Inuit people who have lived here for more than 5,000 years.

Local children told me that Ikpiarjuk was ice-free on July 5, 2017. The even more troubling news was that everyone in town seemed to believe the ice would disappear earlier each year. We trudged through deep ponds of water on the ice in tall rubber boots to get around. The snowmobiles that came in to shore weaved around breaks and leads in the ice on a circuitous path. They sprayed a rooster tail of water skyward as they passed us, accelerating to surf across open water breaks. As we walked over the surface, we had to test each step to ensure we didn’t fall through. 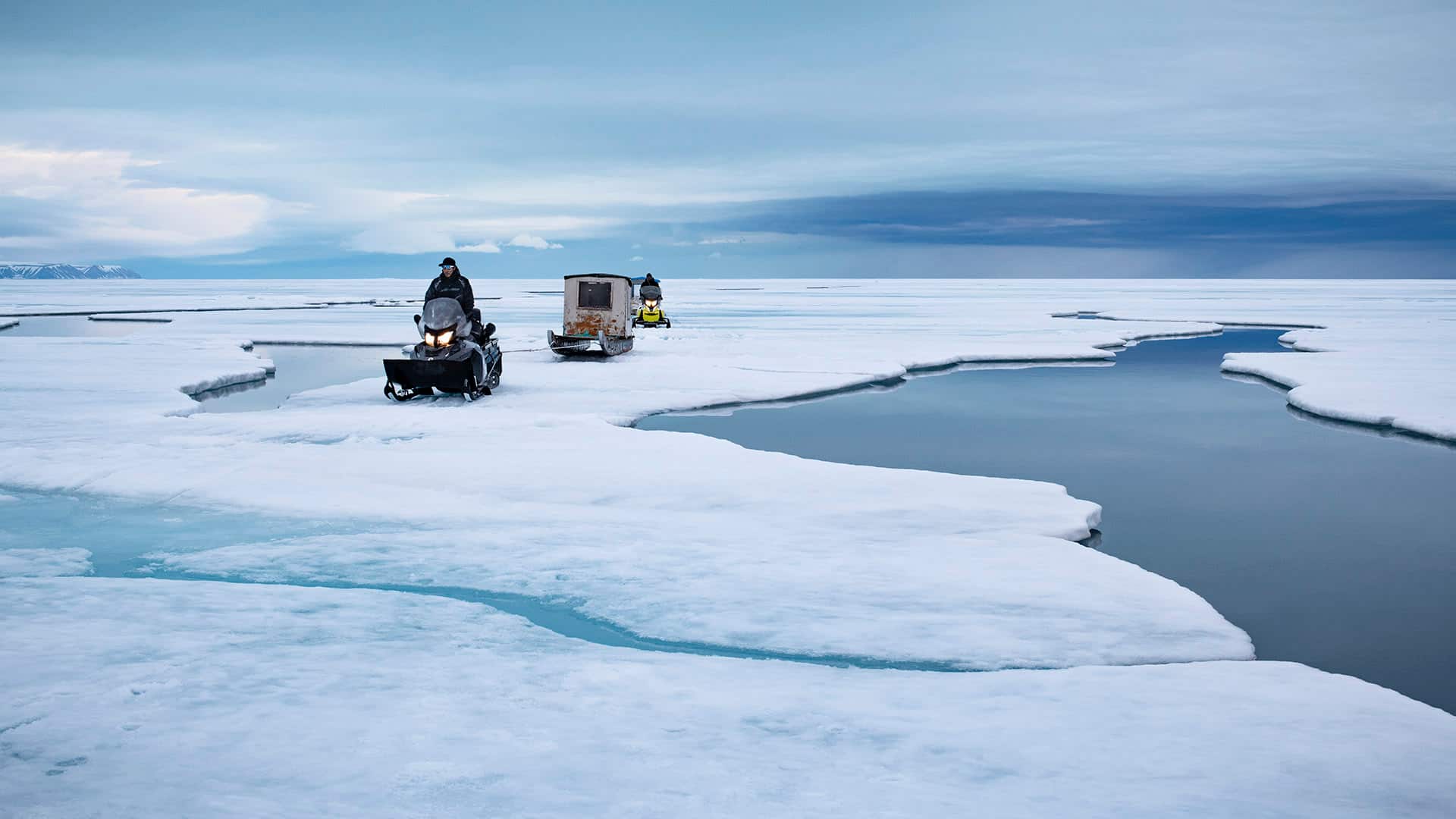 Snowmobiles weave around the breaks and leads in the ice.

I noticed that pieces of dark-coloured garbage were creating small sinkholes in the ice. Even a discarded school assignment eroded the surface, the black lines on the paper absorbing heat and melting the ice beneath it. The temperature in early June was 8 C — too warm for late springtime. With 24-hour sunlight, things quickly changed each day. Soon, I was sunburned, and so was the ice.

When we arrived at our camp near the floe edge, where land-fast ice meets the ocean, we discovered that a deluge of pouring rain had left ponds of water in our tents. In the middle of the first night, we moved all our tents to a higher level of packed snow to protect ourselves for a scant few days before we would have to move camp again. It would be a challenging shoot.

Within weeks, the ocean swallowed the ice. In Ikpiarjuk, people put their Ski-Doos away and launched their boats three weeks earlier than the previous year. The melting ice released colonies of algae into the water, feeding zooplankton and, in turn, everything up through the food web. Like a freshly stocked moving buffet, the concentrated food source at the floe edge lured marine life to follow along until the ice completely dissolved and broke up.

WATCH: Beluga whales and narwhal gather at the floe edge.

Narwhals, beluga whales and eider ducks followed the shifting floe edge as it delivered their daily sustenance. Walruses, polar bears and seals held on to the last rafts of ice to hunt, rest and rear their young. But as the reflective, white sea ice disappeared, the dark, open ocean absorbed more heat. Giant icebergs from the Greenland ice sheet journeyed south, tumbling, turning and dissolving back into the ocean, adding to the slow rise of the world’s oceans.

MORE:
The Arctic is warming faster than anywhere else on the planet

Climate change is happening; it’s easy to see it in the North. The challenge is to help humanity understand that what happens in the North doesn’t stay in the North — and that how we address and adapt to our changing climate in the next few years will determine the future of our civilization.

Watch Under Thin Ice on The Nature of Things.

DOWNLOAD THE APP: Learn more about the expedition on the Under Thin Ice app.  iOS  Android