Opossums: These misunderstood marsupials clean up our yards and even help fight Lyme disease

'They have a face only a mother could love,' says biologist, but they're highly adapted to the urban landscape. Graham Duggan

“Nothing prepares you for an opossum. They have a face only a mother could love. Really, they are such a weird looking animal” — Suzanne MacDonald, psychologist and biologist featured in Nature’s Cleanup Crew, a documentary from The Nature of Things.

You may seldom see them, but they’ve been quietly crossing our borders and taking up residence in our backyards for years. With white faces, naked tails and beady eyes, these critters might be mistaken for a very large rat, but they’re a much more interesting neighbour.

The Virginia opossum is North America’s only marsupial (a mammal that carries its young in a pouch) and is native to the southern U.S. However, it’s been staging an invasion into Canada — but don’t be alarmed!

The opossum is a Canadian newcomer

The opossum — commonly called a possum in North America (though the term technically refers to marsupials native to Australia) — is a helpful addition to habitats across Southern Ontario and Quebec. It’s even reaching parts of B.C.’s Fraser Valley.

One person who has been watching them closely is Toronto-based psychologist and biologist Suzanne MacDonald. She has spent years observing the city’s urban raccoons, but recently, she’s been studying these homely, surprisingly useful newcomers.

“I saw my first opossum 20 years ago in Toronto,” says MacDonald. “They were much rarer back then, but more and more people have become familiar with them in the last five years.

With their long snouts and beady eyes, “they are not traditionally cute,” says MacDonald, “but they’re super weird.” They have naked, round ears and a long, rat-like prehensile tail, which aids in climbing. No wonder they’re so often mistaken for rats of unusual size!

But that’s where the similarities between the opossum and rodent end. As marsupials, opossums can carry up to 13 babies in their pouch. When the joeys grow too big to fit, they cling to mom’s back as she ambles along. Opossums also have an opposable “thumb” on their hind feet, which further aids their climbing forays.

And the opossum has more impressive tricks up its sleeve, or rather, in its pouch.

The opossum is a vital member of nature’s cleanup crew

It’s safe to say that opossums are misunderstood here in Canada. The late mayor of Toronto Rob Ford famously waged war against them, but as with many city-dwellers, he wasn’t aware of their benefits.

Through MacDonald’s extensive observations of Toronto’s urban critters, she’s discovered that the opossum has found its niche. “Raccoons are by far the pushiest of the urban animals to share our cities,” she says. “[Opossums are] smart enough to know their place, and they have adapted to find their own spot in an already crowded urban ecosystem.” So much for the idea that these slow-moving animals aren’t intelligent.

Opossums also offer a benefit that our urban raccoons don’t. They can digest almost anything — including a dead animal’s bones — and in doing so, they help remove dangerous pathogens from the environment.

“They eat everything,” MacDonald exclaims, “but they don’t get sick! They are really well adapted to the urban landscape, and they’re helping us out by eliminating diseases from carcasses and food waste that could otherwise be spread.

“They are ancient creatures, and they’ve been doing this for a very long time. Only now, they’re doing it in our backyards.” 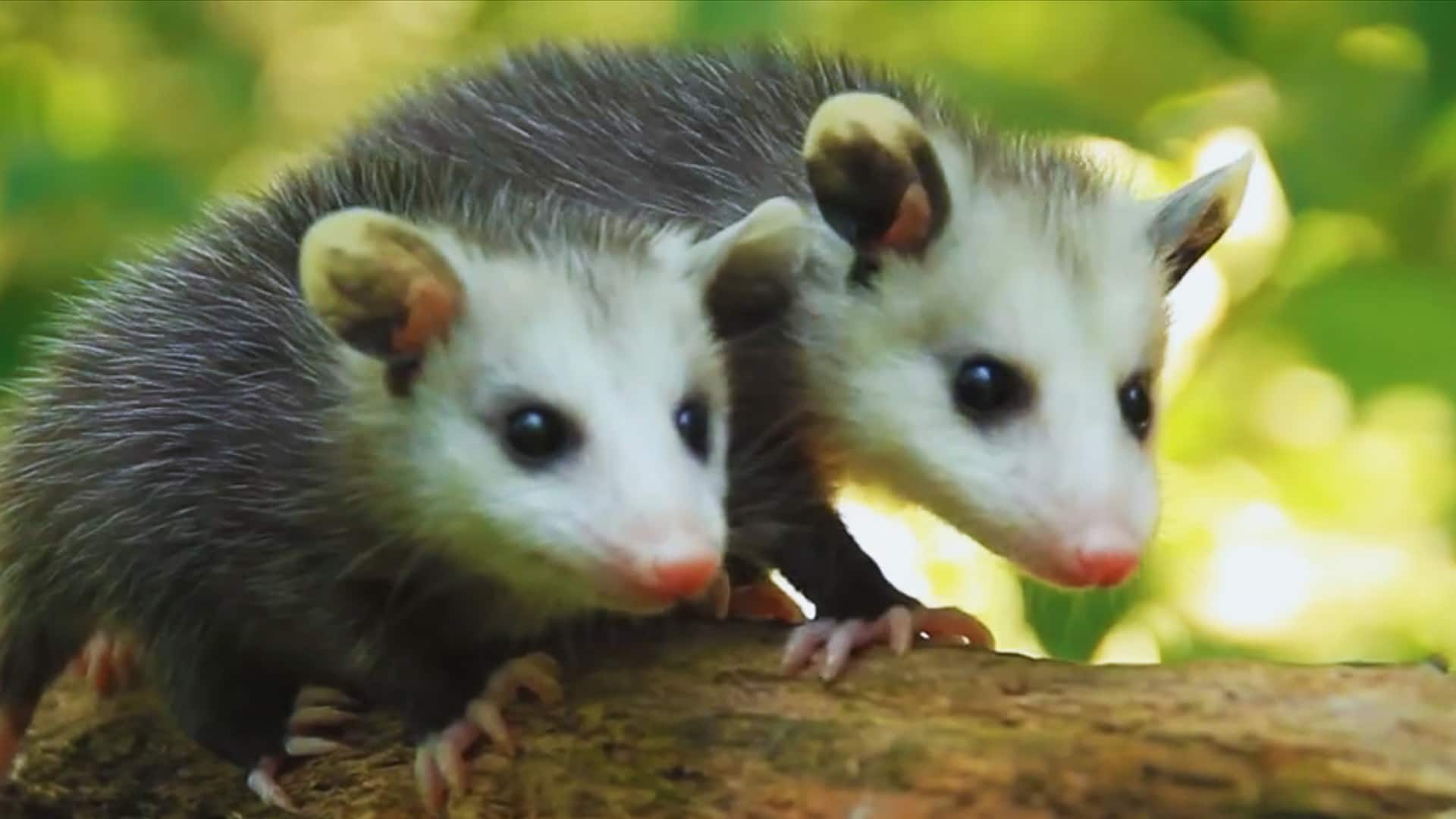 Incredibly, opossums show immunity to numerous types of snake venom and their blood could hold the key to fighting snake bites around the world!

But closer to home, it’s their food preferences that set them apart.

In addition to feasting on carcasses and waste, opossums will catch and eat cockroaches, mice and rats on their nightly prowls. Their appetite for slugs, snails, toads and even snakes helps to keep most gardens pest-free. And while they may take the odd sampling of fresh fruits or vegetables, they often prefer plant material that has started to rot.

One item on the opossum’s menu is another newcomer — ticks. A warming climate has brought the insects, and Lyme disease, to our forests and grasslands. According to the Public Health Agency of Canada, cases of Lyme disease in Canada jumped from 144 in 2009 up to 992 in 2016, and the number continues to climb.

Thankfully, opossums act like vacuum cleaners, killing almost 95 per cent of the ticks that try to feed on them. A single opossum could eliminate as many as 4,000 ticks in a week!

And, as an added bonus for your next trivia night: Surprise! Opossum males (like most marsupials) have a two-headed penis.

They aren’t a nuisance

The opossum is possibly the most harmless, helpful urban creature of them all. They don’t chew or dig and they typically don’t break into your attic, says MacDonald. Instead, they use the dens of other animals and, while they’re able climbers, she notes that their paws aren’t as dextrous as the wily raccoon, so they can’t cause damage.

Opossums also tend to be transient, passing through an area for a short period before moving on. And due to their naturally low body temperature, they have a very low risk of contracting and spreading rabies.

In contrast to Rob Ford’s characterization of these animals as “vicious,” an opossum’s typical response to being threatened is possibly the most benign in the animal kingdom: they fall unconscious. Instead of biting, they simply stop, drop and “play possum,” losing consciousness for up to four hours.

“To complete the illusion,” MacDonald says, “they exude a smell like rotting meat. After a while … they jump up like nothing happened.” Vicious, indeed!

The opossum is having a hard time in the Canadian winter

Sadly, during particularly cold periods, helpful Virginia opossums start turning up in wildlife shelters or end up dead. Their naked tails, ears and paws are susceptible to the cold and prone to frostbite.

“It can take a few hours for frostbite to develop,” says Nathalie Karvonen, executive director at the Toronto Wildlife Centre. “But we often won’t see the animal suffering until they’re in worse shape after a few days. So it’s during the extended periods of deep freeze that we see more animals coming into the Centre.”

The Centre receives approximately 5,000 animals into their care every year, and it’s during the winter months that animals can end up in the most trouble, since wildlife isn’t usually as visible and people aren’t actively observing animals out in the cold.

MORE:
These microscopic bacteria can eat up oil spills

By the time someone might actually notice an opossum with injuries, the problem has likely become more serious. “Opossums don’t normally hang out in the open where they can be seen,” says Karvonen. “If you notice one sitting out in the open for a long period of time, it’s likely that it’s in trouble.”

Karvonen’s says to keep an eye out for opossums behaving strangely. “They will freeze if you approach, so if there’s one sitting out in the cold on the fence and doesn’t move on after you leave, that’s likely the time to call your local wildlife rehabber or vet clinic for advice.”

Another way to be “opossum friendly” during the winter is by not evicting them. “If they’ve found a warm spot, consider leaving them be until the spring,” suggests Karvonen. “They won’t chew anything or cause damage, and in the spring, they’ll move out on their own.”

Another way to be considerate to opossums who might appear in your yard in any season, according to Karvonen? “Be aware of what your pets are doing. Since they ‘play dead,’ opossums don’t do well when it comes to predators.”

So give a thought to the plucky opossum and if you’re lucky enough to find one in your yard, be sure to thank the beady-eyed marsupial that will gladly clean it up for free.

Watch Nature’s Cleanup Crew on The Nature of Things.