On Vancouver Island, Summer Droughts Are the New Normal

While many of us are aware of the severe drought in California as seen in Nature of Things doc Running on Empty, drought is also a problem here in Canada and can happen in the most unlikely of places. Dr. Sarah Boon is a science writer based in British Columbia.

Many Canadians imagine that Vancouver Island is perpetually damp. With its incessant winter rains and its temperate rainforest of massive cedar and Douglas fir trees dripping with moss and lichen, it would certainly seem so. In reality,  Vancouver Island’s climate is “warm-summer mediterranean,” with mild, wet winters and relatively dry summers.

For the last three years, each of those dry summers has turned into a severe drought. Given the cascading effects of drought on everything from agriculture to hydropower generation to fish habitat, provincial scientists have been keeping a closer eye than usual on summer conditions on Vancouver Island.

The British Columbia (BC) River Forecast Centre (RFC) defines drought using four key indicators. These include how much snow there is at the beginning of spring, the amount of rain over the most recent one month period, the measured seven-day average streamflow, and the seasonal streamflow forecast by their models. The information from these indicators is used to set the drought level, from 1 (no drought) to 4 (extremely dry). Vancouver Island rated in extreme drought in July 2015, BC government

The past three summers (2014-2016) have seen worrying drought conditions on Vancouver Island, although each has been affected by different drivers: A combination of low snowpack, spring/summer air temperatures up to 2-3°C above normal, and low spring/summer precipitation have all played a part in creating medium-to-severe drought conditions.

Droughts are rare, but not unheard of on Vancouver Island. Tree-ring scientists from the University of Victoria have identified 23 severe droughts here since 1674. There’s no record of a string of summer droughts like we’ve had in the last three years, with the exception of 1868-1869. And as RFC hydrologists are quick to note, we’ve been lucky that winter rainfall has replenished groundwater, lakes, and soil moisture after each of our more recent summer droughts.

The last three summers have shown Island residents just how precious water is.

In 2015, many people’s wells went dry, requiring that they truck in water from external sources. In all three summers the recreational fishery has been closed, as the warm, shallow rivers increase stress on the fish population. Fall Chinook salmon runs are also affected, as returning salmon have to brave the warm, shallow waters to reach their spawning grounds. An ad hoc group formed in 2012 to capture salmon and truck them upstream to deeper, cooler spawning areas, and has been active each year since.

In the Cowichan Valley, the municipal sewer system discharges treated water into the Cowichan River. Low river levels result in high bacteria concentrations, making the river unsuitable for people to go tubing and swimming.  In 2015, BC Hydro ran their north Island power generation at 15 per cent capacity, as flow in the Puntledge River was too low to activate their turbines. While there’s a plan in place to dredge in front of the Comox Dam to increase Puntledge River flows if necessary, this would stir up sediment and negatively affect drinking water quality in the Comox Valley.

These dry summers have pushed governments to plan for water scarcity. The provincial government has developed a drought response plan that shares responsibilities across all levels of government.

Municipal governments have also developed online programs to educate residents about drought. For example, the Cowichan Valley Regional District has developed a “New Normal” website all about drought. These approaches also provide local residents with concrete actions designed to minimize water use. Examples include letting lawns go brown, watering every second day, and not washing cars or filling swimming pools.

Summer drought may be the new normal on Vancouver Island. Research suggests that future droughts may occur more often and be more severe due to a combination of both climate and land use change. Drier summers will likely take their toll on local vegetation — even the ubiquitous cedar tree has experienced drought stress during the past three summers. It’s likely that, even though we’re inundated with rain during the winter season, we’ll have to adopt a new mindset, one that sees water as a limited and valuable resource to be conserved during times of shortage. 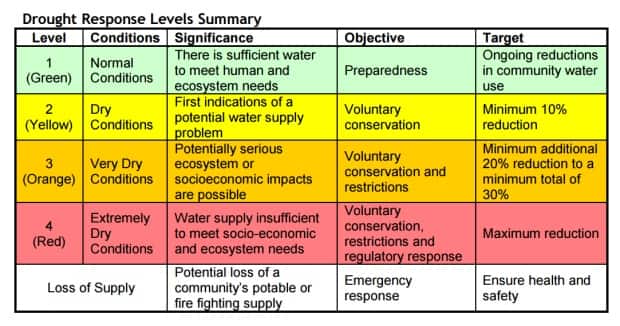 The levels of drought and what they mean, according to the B.C. Government's drought response plan, created in June 2015, BC Government)