Synesthesia, achromatopsia and tetrachromacy are conditions that remind us how individual colour perception can be

People can perceive colour very differently from each other.

As light reflects off objects, it interacts with our eyes and brains to form our perception of colour. “Every colour that people see is actually inside their head projected outward,” says neuroscientist Beau Lotto . “Colour exists in [our minds]; it doesn’t exist out there. It’s a useful perception of our world, but it’s not an accurate perception of the world.”

But while we all may see the world a little differently, some people have conditions that make their perception vastly different. Here are three individuals featured in Living Colour, a documentary from The Nature of Things.

Some differences in colour perception are common, such as colour blindness. According to the documentary, the condition affects around one in 12 men and one in 200 women of northern European descent.

Typically, our colour vision is trichromatic, meaning we have three types of cone cells in our eyes, blue, green and red, that respond to short, medium and long wavelengths of light. Each cone allows us to see around one hundred shades, combined, we can see about a million colours. Colour blindness may be caused by faulty cones or an issue with the connection between the cones and the brain, with the most common anomalies making it difficult for people to tell the difference between shades of red and green.

But Meagan Sims, an artist from Kitchener, Ont., lives in a world without any colour. She has achromatopsia, a rare type of colour blindness that affects an estimated one in 30,000 people. “Everything’s grey to me,” she says. “Absolutely everything is grey.” 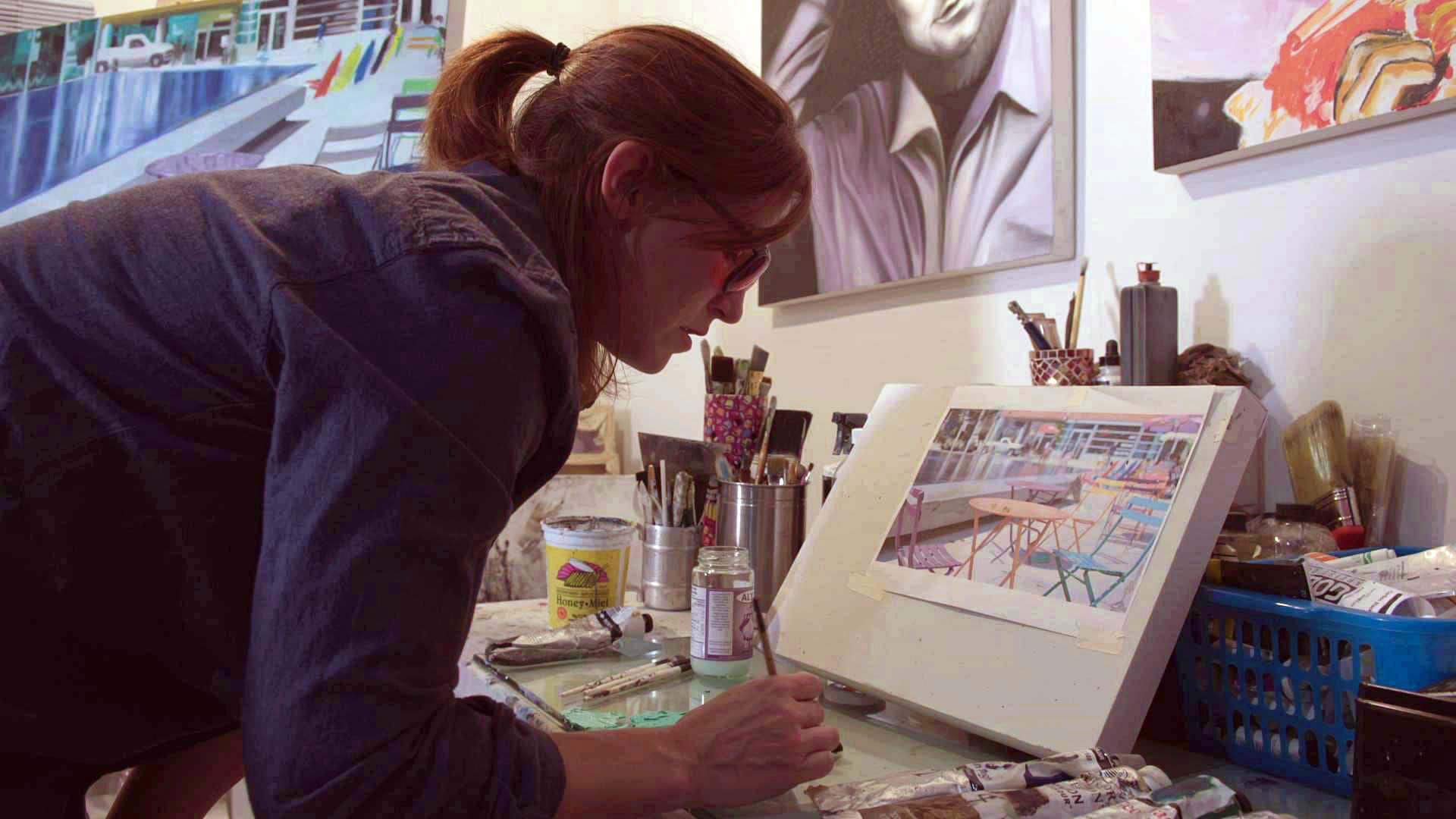 Sims’s colour-detecting cone cells don’t work at all, and her condition also makes bright light painful to look at. She wears rose-tinted glasses to filter high energy wavelengths of light and does most of her photography work at night.

After many years of taking photos and painting in black, white and grey — the way she sees the world — Sims decided to start experimenting with colour. She picks colours that seem closest to the grey tones she sees in her photographs, arranging her tubes of paint from lightest to darkest.

Through her art, Sims has discovered remarkable ways to express herself with colours that she can’t even see.

At the other end of the spectrum we meet Concetta Antico, a San Diego artist who says she can see a myriad of colours the rest of us cannot. “Green’s not green for me …. there are probably thousands of greens,” she says. “That is what it’s like to have super vision; it’s like super-enhanced colour.” 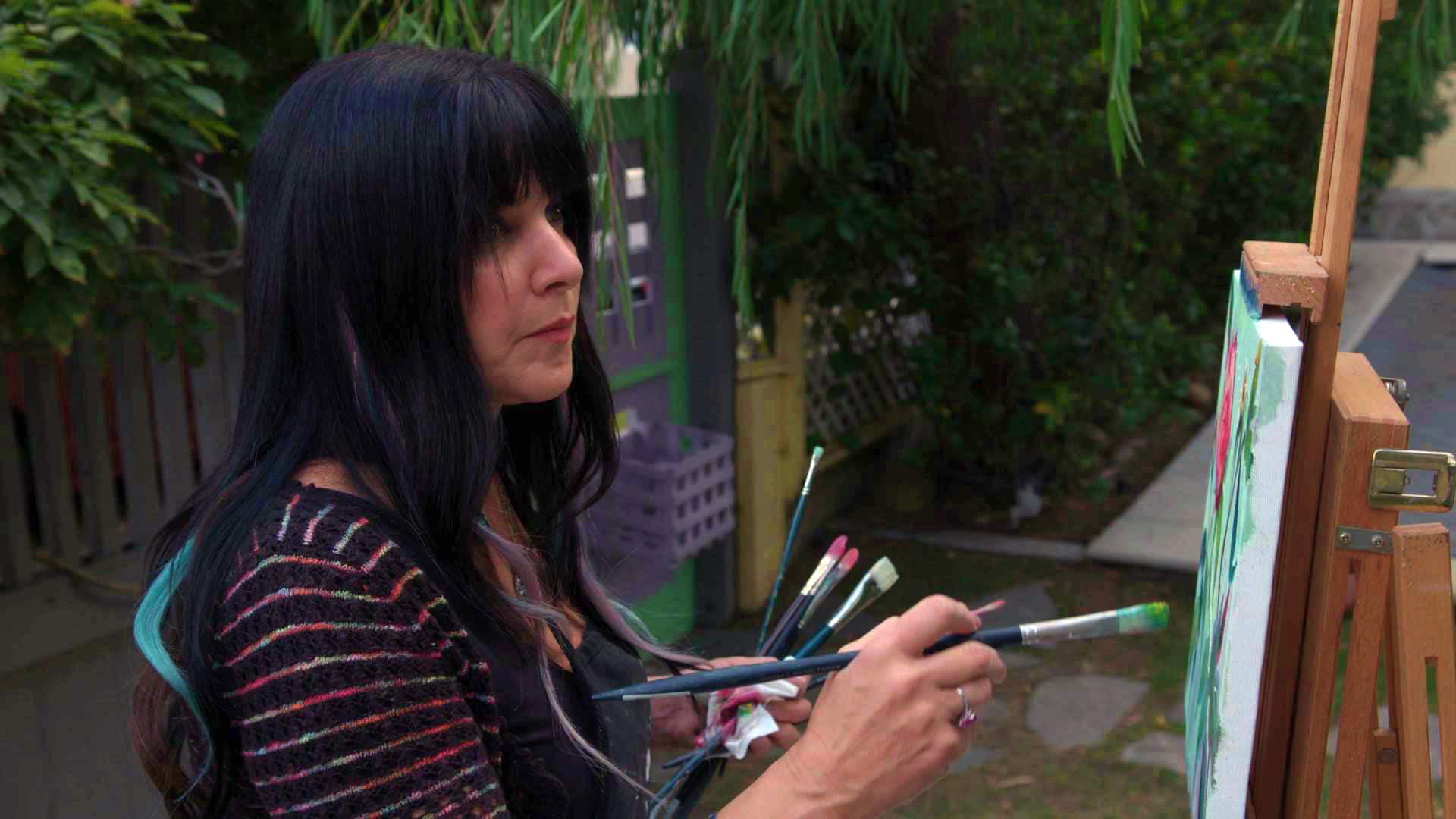 Instead of having three types of cone cells in her eyes, Antico may have four, making her a tetrachromat.   According to the Tetrachromacy project at Newcastle University, about 12 percent of women have the genetic markers for this condition, but not all of them have a functioning fourth cone. Identifying a functioning tetrachromat is rare and difficult. And there’s more scientific research to be done. In Living Colour, Kimberly A. Jameson, project scientist at the University of California, Irvine, discusses testing Antico to determine if she is a tetrachromat.

Antico calls herself “The Color Queen” and has built a successful career creating paintings that showcase her unique view of the world. But having super vision, she says, can make grocery shopping difficult. “I do it as rarely as possible,” says Antico. “I get what I need and I get out because I can’t stand all the colour. It’s overwhelming.”

MORE:
Your brain is lying to you — colour is all in your head, and other 'colourful' facts
Vantablack: One of the darkest materials ever made

Kaitlyn Hova, a musician with a background in neuroscience, has a condition called synesthesia. Synesthesia means “joined or coupled sensation”. For people who have this trait, the stimulation of one sense causes an involuntary response in another (a certain sound triggering a taste, for instance). Another form can cause the brain to connect sensations with objects, such as numbers or shapes. Nobody knows exactly how many people are affected by synesthesia but some experts suggest about 4% of the population have some form of the condition.

There are many unique types of synesthesia, but for Hova, sound triggers visions of colour and forms. “For me, every sound is a colour and a shape, and has a position in space,” she says.

Hova was completely unaware that she was different until a music teacher in college mentioned to her class that some people are able to physically see sounds. Until then, she had just assumed that everybody could.

To help demonstrate her colour perception to others, Hova and her husband designed a 3D-printed violin that glows the colour she sees when each musical note is played.

Watch as Hova plays her violin.

“I think my auditory synesthesia is actually a weird form of perfect pitch,” Hova says. “Instead of thinking, Oh, that’s an A, [the note] goes orange.”

She’s used her unique background and abilities to launch a career that combines music, neuroscience and coding, and also travels the world as a public speaker.

Watch Living Colour on The Nature of Things.