Meet the weird, wacky and wonderful creatures that lived in Cambrian seas over 500 million years ago

High in Canada’s Rocky Mountains, the animals of an ancient ecosystem can be seen battling for life. The fossils of the Burgess Shale offer a glimpse at the incredible diversity of early life on Earth, frozen in time and locked in stone — you just have to go digging to see it.

Working at 2,500 metres above today’s sea level, a group of scientists from the Royal Ontario Museum (ROM) chipped away at a prehistoric, tropical sea floor that was once a thriving community of the planet’s first animals. The story of the team’s incredible discoveries is told in First Animals, a documentary from The Nature of Things.

‘The world’s most important animal fossils’

The fossils of the Burgess Shale are very special. First discovered in 1909 in B.C.’s Yoho National Park by famed naturalist Charles Walcott, the fossil beds have preserved, in incredible detail, the strange animals from our distant past.

Typically, only bone or hard shells become fossilized over millions of years, while soft tissues like cartilage, skin and muscle decay very quickly. But here in the Burgess Shale, the conditions were just right for preventing decomposition, an underwater landslide trapping ancient animals in mud and perfectly preserving them for over half a billion years. 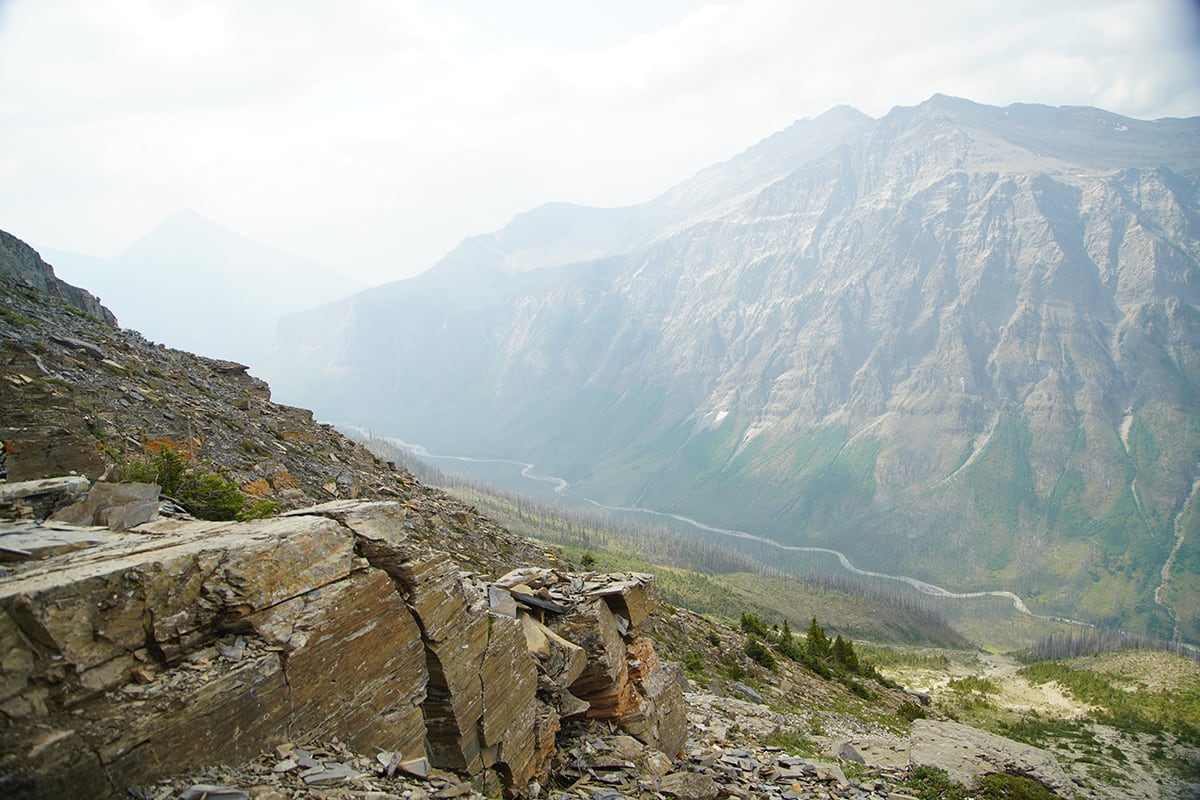 The ROM quarry site high up in the Rocky Mountains.

During Earth’s more than four-billion-year infancy, the planet’s only life was simple and microscopic. But around 635 million years ago, that began to change. The first large, multi-celled organisms appeared, like cnidarians (including corals and jellies) and sponges.

Then, about 540 million years ago, something else changed ... dramatically.

It was the time of the Cambrian Explosion, an eruption of life when Earth’s very first animals began appearing in the fossil record — the ancestors of all major animal groups that we know today.

The Cambrian sea was a very strange and alien place. Evolutionary biologist Stephen Jay Gould described the animals that lived there in his book Wonderful Life: The Burgess Shale and the Nature of History: “Magnify some of them beyond the few centimetres of their actual size, and you are on the set of a science-fiction film.” Gould considered the fossils of these creatures to be “the world’s most important animal fossils.”

The Cambrian seas were a proving ground

With the explosion of life in Earth’s seas, the marine ecosystem was a hive of activity. Every strange and wacky creature struggled to survive, and competition was fierce. For the first time, some animals became predators.

This put immense selection pressure on species, resulting in a rapid evolutionary arms race: prey evolved elaborate defenses, while predators quickly evolved ways to foil those defenses. As a result, the Cambrian seas were the birthplace of the first mouths, eyes and legs.

Some of the odd critters living in these ancient seas included Opabinia, which had five eyes and an elephant trunk–like appendage, while Hallucigenia looked like a prickly worm with legs! 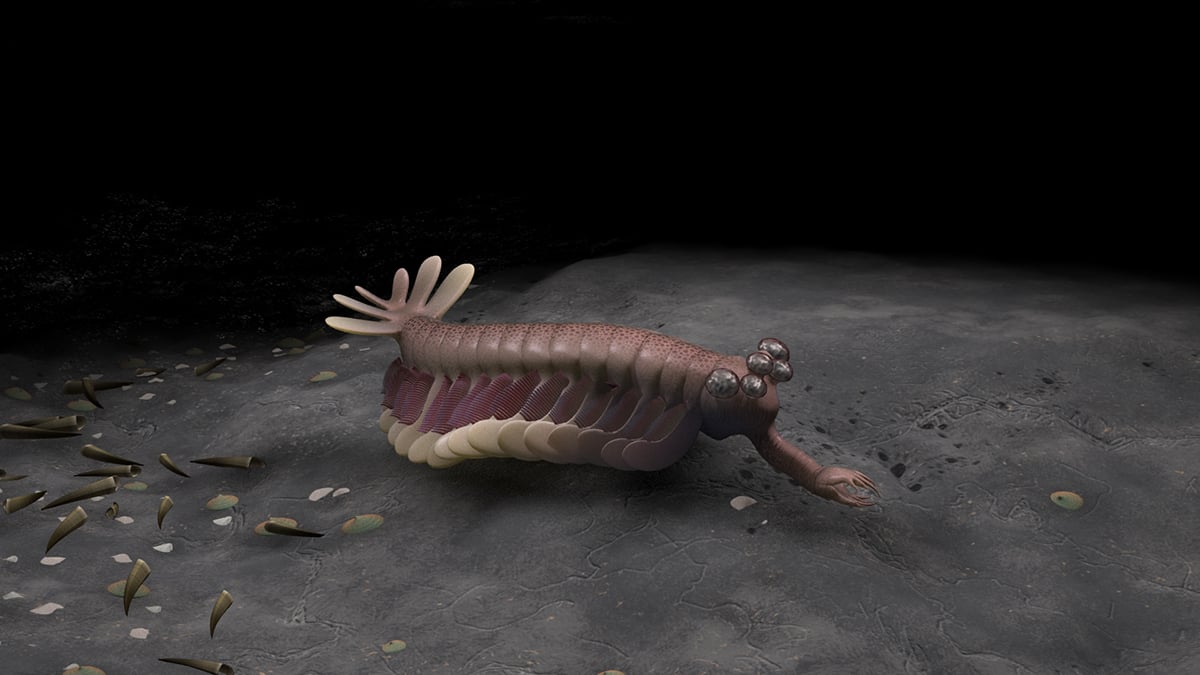 A digital recreation of Opabinia 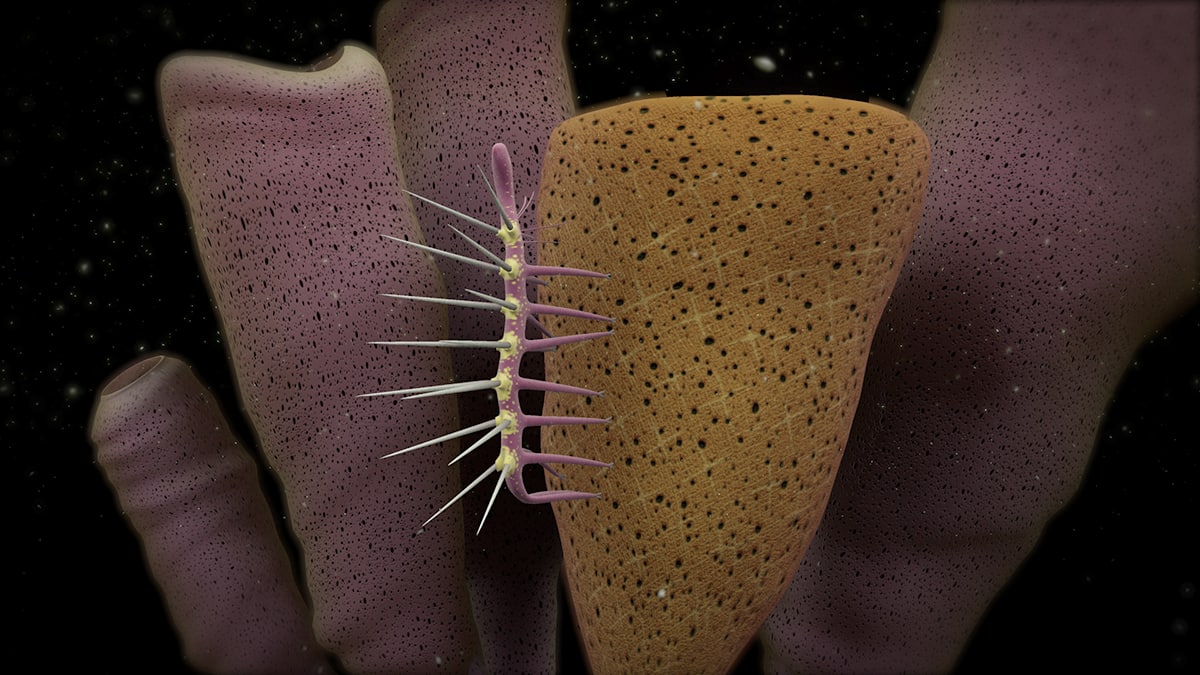 A digital recreation of Hallucigenia

Yawunik is a half-billion-year-old ancestor of today’s insects and spiders, but it looked nothing like them. It had a head-mounted set of sensory appendages that doubled as claw-like tools for catching and cutting its prey. 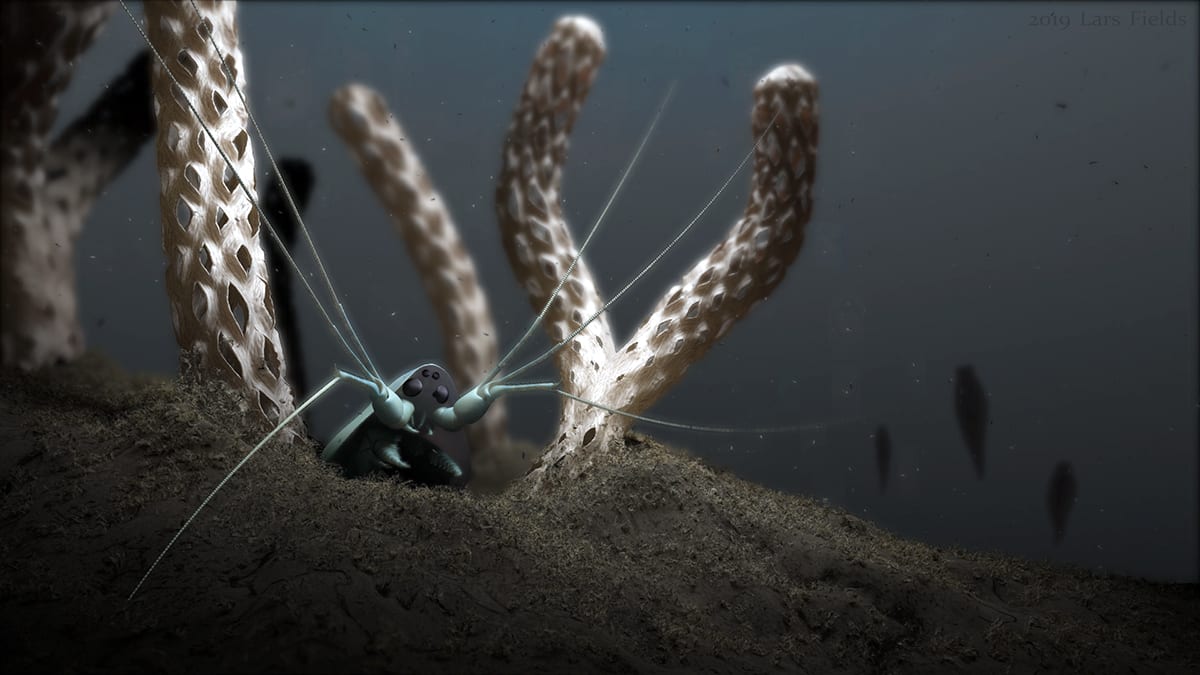 A digital recreation of Yawunik

Anomalocaris could be considered the T. rex of the Cambrian. It was the largest predator to actively search out prey to munch on. And as predators go, it certainly looked fearsome.

Anomalocaris had a set of compound eyes, like a dragonfly, allowing it to see in much greater detail than any of the scuttling creatures it fed upon. Once it zeroed in, it used two trunk-like mouthparts equipped with hooks to trap and devour its prey. 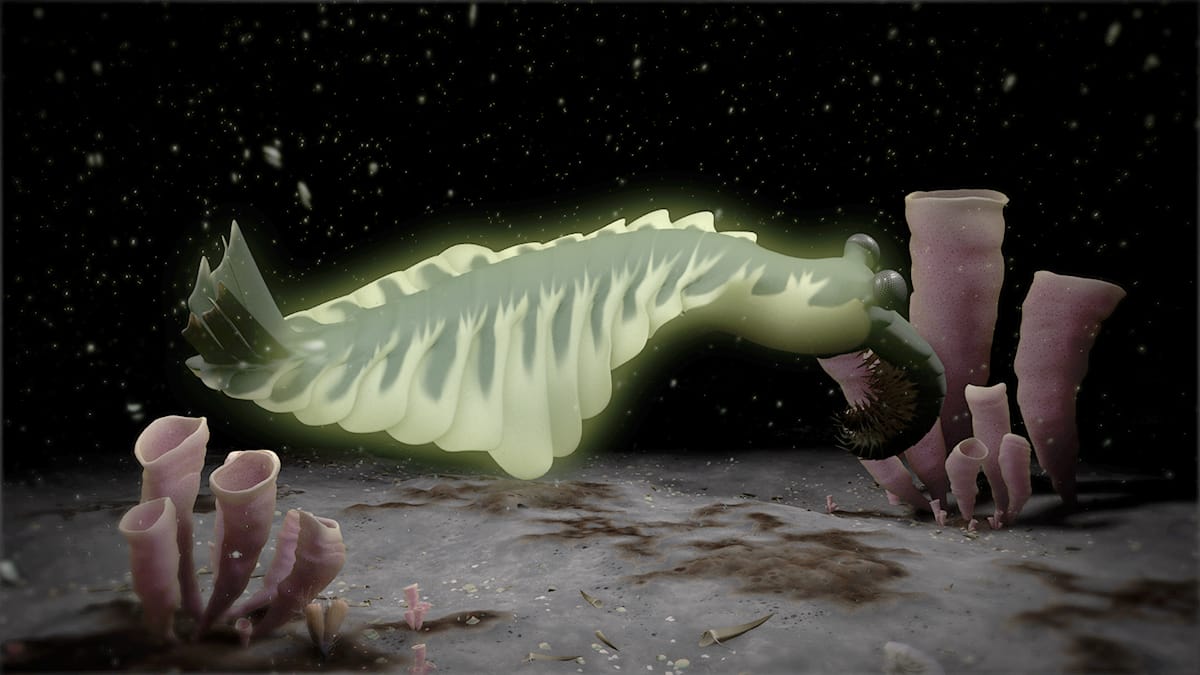 A digital recreation of Anomalocaris

Other Cambrian creatures may seem a little more familiar, like Metaspriggina, an early fish that had a heart, liver and the first version of a backbone. That makes this little fish one of the first known vertebrates and one of our earliest known ancestors. 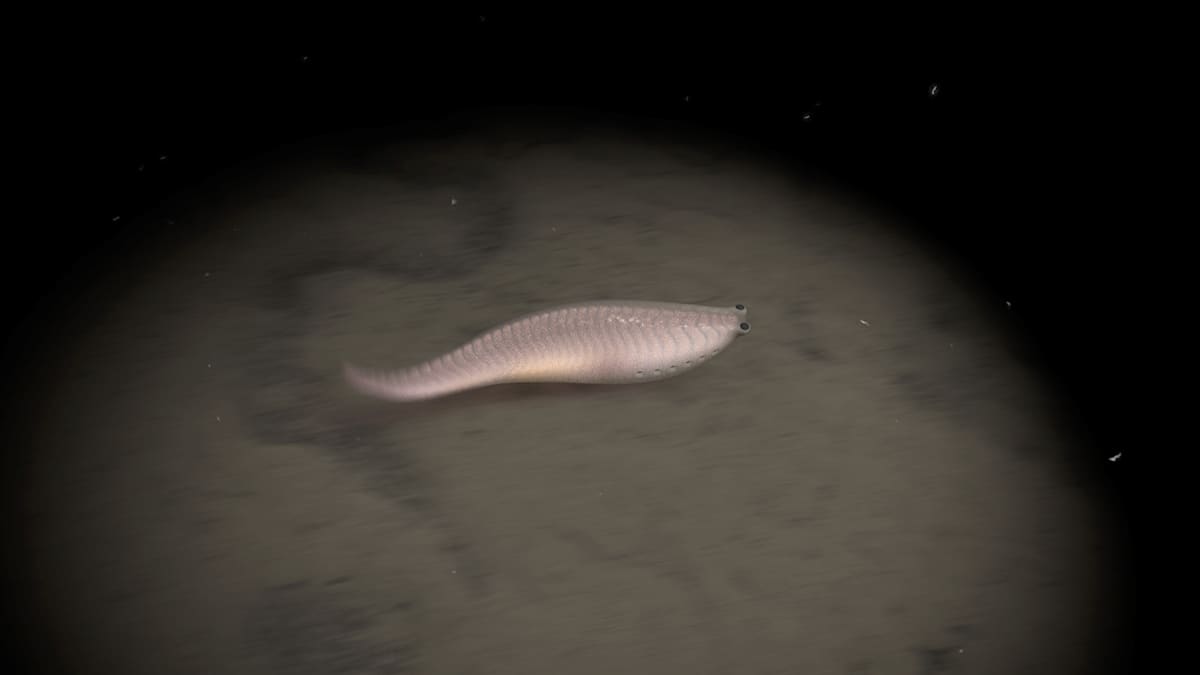 A digital recreation of Metaspriggina

Discovering new life in the rock

Elsewhere in these early seas was another animal. During the filming of First Animals, Caron and his team unearthed fossils from a brand new species to science, and it was a giant.

Cambroraster falcatus could grow up to 30 centimetres in length — massive considering other creatures at the time were smaller than your little finger.

It had a large carapace, or exoskeleton, to protect itself from swimming predators and impressive claws that could scour the sea floor. “We think Cambroraster may have used these claws to sift through sediment, trapping buried prey in the net-like array of hooked spines,” says Caron, adding that it would then devour its prey with its circular mouth, which looked similar to a modern lamprey’s mouth.

WATCH: The discovery of a brand new species.

These strange Cambrian creatures, which quickly evolved all sorts of odd solutions to surviving the ancient and deadly seas, eventually pushed their way onto land as insects and later as amphibians and reptiles, colonizing the surface of the Earth. They may look otherworldly to us, but the Cambrian animals set the stage for all animal life on Earth, including us.

Watch First Animals on The Nature of Things.