Meet the horse: The tiny tropical creature that evolved into our closest animal companion

New three-part series Equus looks at the how horses and humans forged a relationship unlike any other.

The mighty horse — aristocrat of animals. Five hundred kilograms of muscle, the fastest distance runner on the planet. At home in scorching deserts and the frozen Arctic. And for the last few thousand years, humans have been by their side. Until the age of machines, our world revolved around horses; it was horsepower that helped us transformed it.

“I just love horses! No animal has done more for us,” says anthropologist Niobe Thompson, who explores the real-life superpowers of horses and follows our fascinating 6,000-year journey with them in the new three-part series, Equus: Story of the Horse. Here are a few highlights.

The first horse, called Mycotherium or “Dawn Horse” appeared about 45 million years ago. Only, it didn’t look like a horse at all. Dawn Horse stood barely 50 cm at the shoulder, had long canine teeth, walked on padded feet and had a flexible spine.

For the series Equus, evolutionary biologist Martin Fischer conducted a year-long experiment to reveal, for the first time, Dawn Horse in motion. He used a perfectly-preserved fossil discovered in Germany to digitally rebuild her bone by bone. Working with teams of animators in Germany and Canada, the filmmakers use this model to bring Dawn Horse back to life. “Doing all this work, it’s fun. That’s science. It’s sailing to an unknown land,  and our island at the moment is Dawn Horse,” says Fischer.

Dawn Horse lived in a much hotter world than ours: the tropical Eocene. Giant fern trees grew in Canada’s Arctic and grass had yet to evolve. These ancestor horses clambered through dense forests, munching on low-hanging fruit and leaves. Dawn Horse was built to climb and scamper, not gallop, and as small as she was, she had to be very good at escaping predators.

Scene from Equus: The dawn horse

But 18 million years ago, the Earth began to cool, and the tropical forests gave way to grasslands. To survive, Dawn Horse had to evolve. In this new world, instead of hiding in woods, she had to run across open plains. Gradually, tiny Dawn Horse became the great land runner of today: Equus caballus, the modern horse. 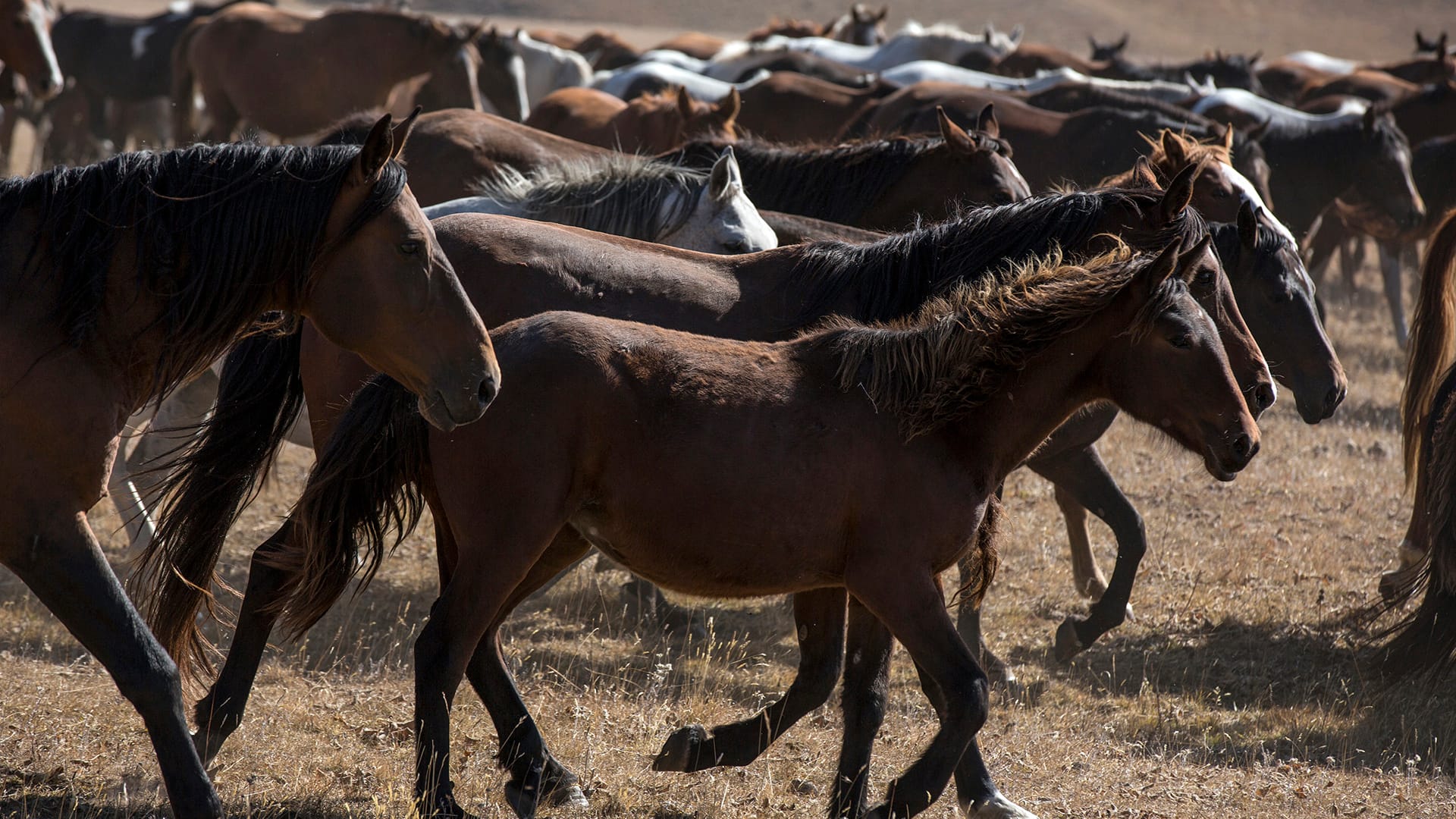 Left to themselves, horses form communities with leaders and followers. There are family groups and bachelor groups, and within them, dominance is a matter of personality, not strength. We’re used to thinking of stallions as the boss, but in many family groups, it’s the mares who make the decisions. Stallions are focused on reproduction, while mares are focused on the well-being of their fellow horses, including threats from predators.

Prof. Karen McComb, an English horse psychologist at the University of Sussex,  studies the inner lives of horses: “Anyone who’s worked with horses, they sense this enormous personality that differs from individual to individual.” Using a set of experiments designed to trigger emotions in horses, McComb ’s team made the surprising discovery that horses have 17 facial expressions, three more than chimpanzees and one more than dogs.

Just like humans, horses are social animals, wired to read each other’s moods and desires. But what’s even more surprising is that they’re reading our emotions too!  When shown photos of human expression, a horse instantly detects hostility or friendliness. They look first at our eyes and mouth; horses seem to know that these features communicate human emotions. “Horses are eavesdropping on the human world all the time,” claims McComb.

That meeting of social minds is at the root of the horse-human relationship. It’s our mental connection with them that allows us to harness the power of an animal so much bigger and stronger than we are.

The ‘speed gene’ can predict a winning thoroughbred

In the big-money game of horseracing, what would you give for genetic information on the speed of a racehorse? Horse breeders now have access to a genetic test, invented by Irish geneticist Prof. Emmeline Hill (University College Dublin), that predicts at birth whether a Thoroughbred will be a distance, sprint or mixed-distance runner. 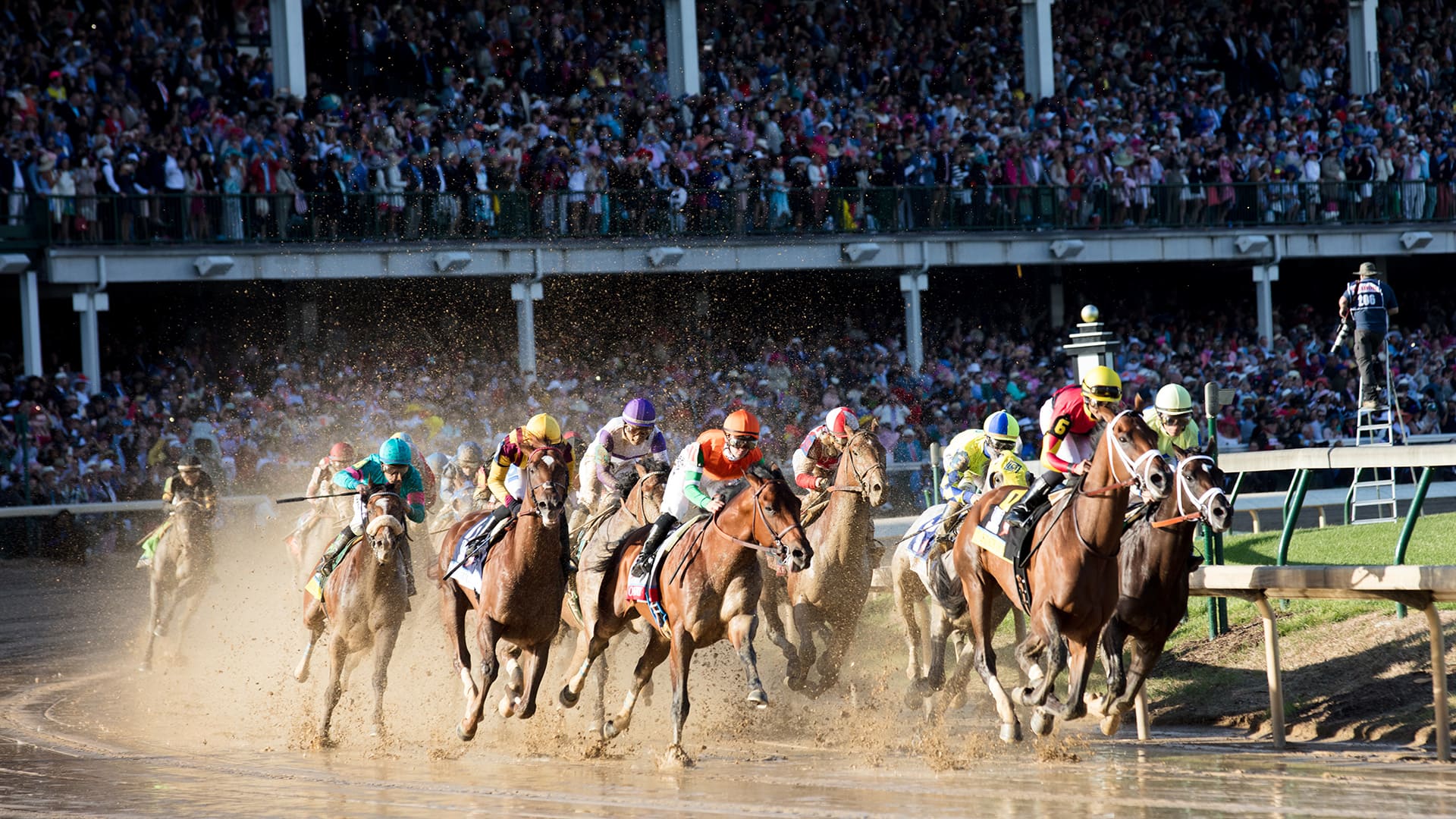 Hill’s “speed gene” test is now used at top horse training centres to select the most promising Thoroughbreds for training and to determine which races are best suited to their genetic profile. After commercializing her work on the “speed gene,” Hill is now developing new tests that could tell us how eager a horse will be to run (tractability) and what nutrition is best for which racehorse.

Sable Island’s population of roughly 500 horses has been living on this remote crescent of sand in the North Atlantic for at least 40 horse generations. Descended from domesticated horses abandoned or shipwrecked there in the 19th century, these horses receive no care from humans today making them the only truly wild population of horses on Earth (the wild Mongolian Przewalski is a different species of equid). 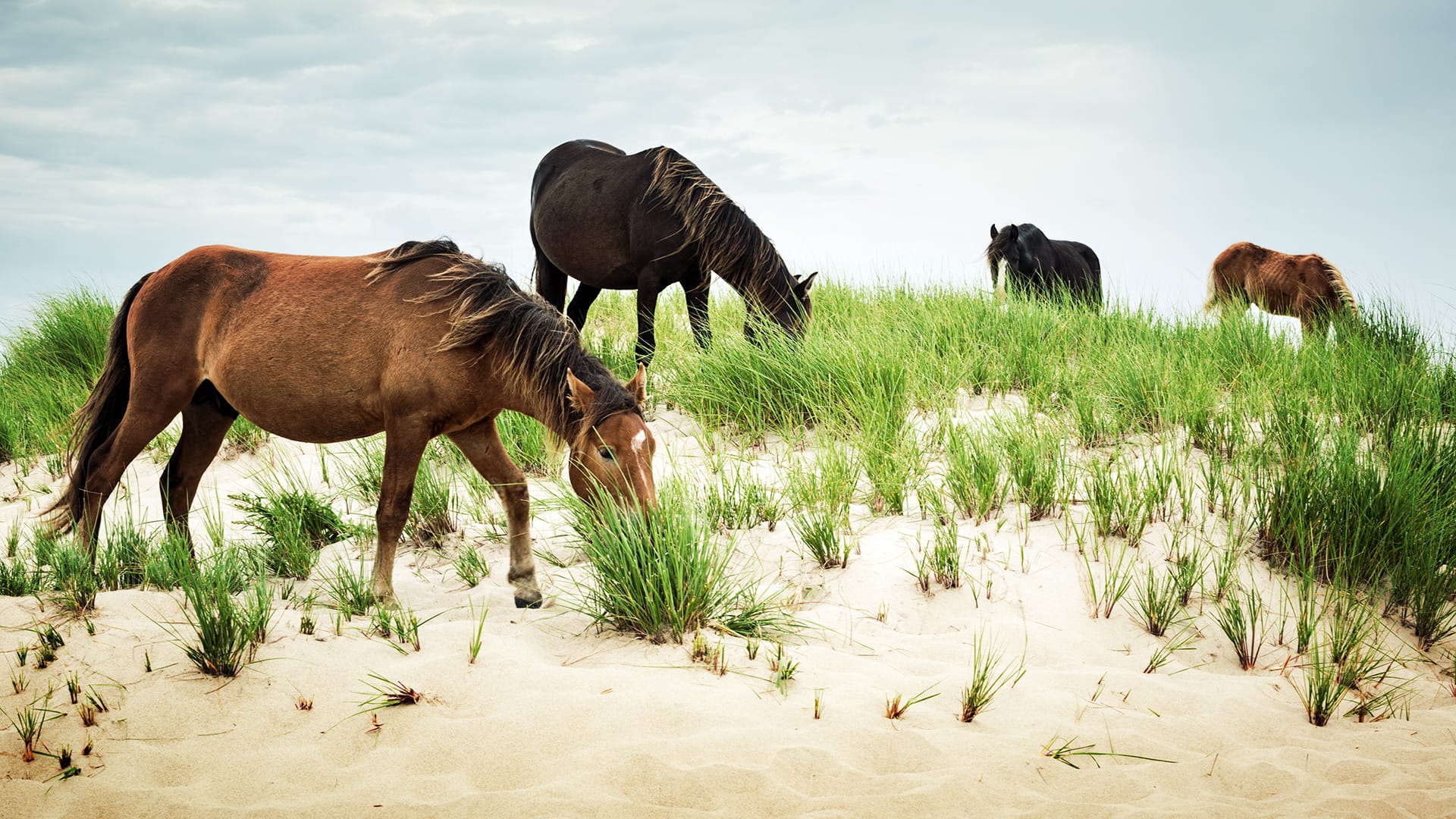 Canadian population biologist Prof. Philip McLoughlin from the University of Saskatchewan calls Sable Island a perfect natural laboratory because he can track every horse from birth to death. Over a decade of study, he has discovered how the horses are changing in response to their environment. With no natural predators, they do not startle and run like typical horses. In this way, they save precious energy they would otherwise use fleeing from danger. They are becoming smaller, a well-known phenomenon among mammals we call the “island effect.”  And their pasterns — the length of bone above their hooves — has shortened in length, making them slower runners, but also less likely to break a leg on the steep dunes. 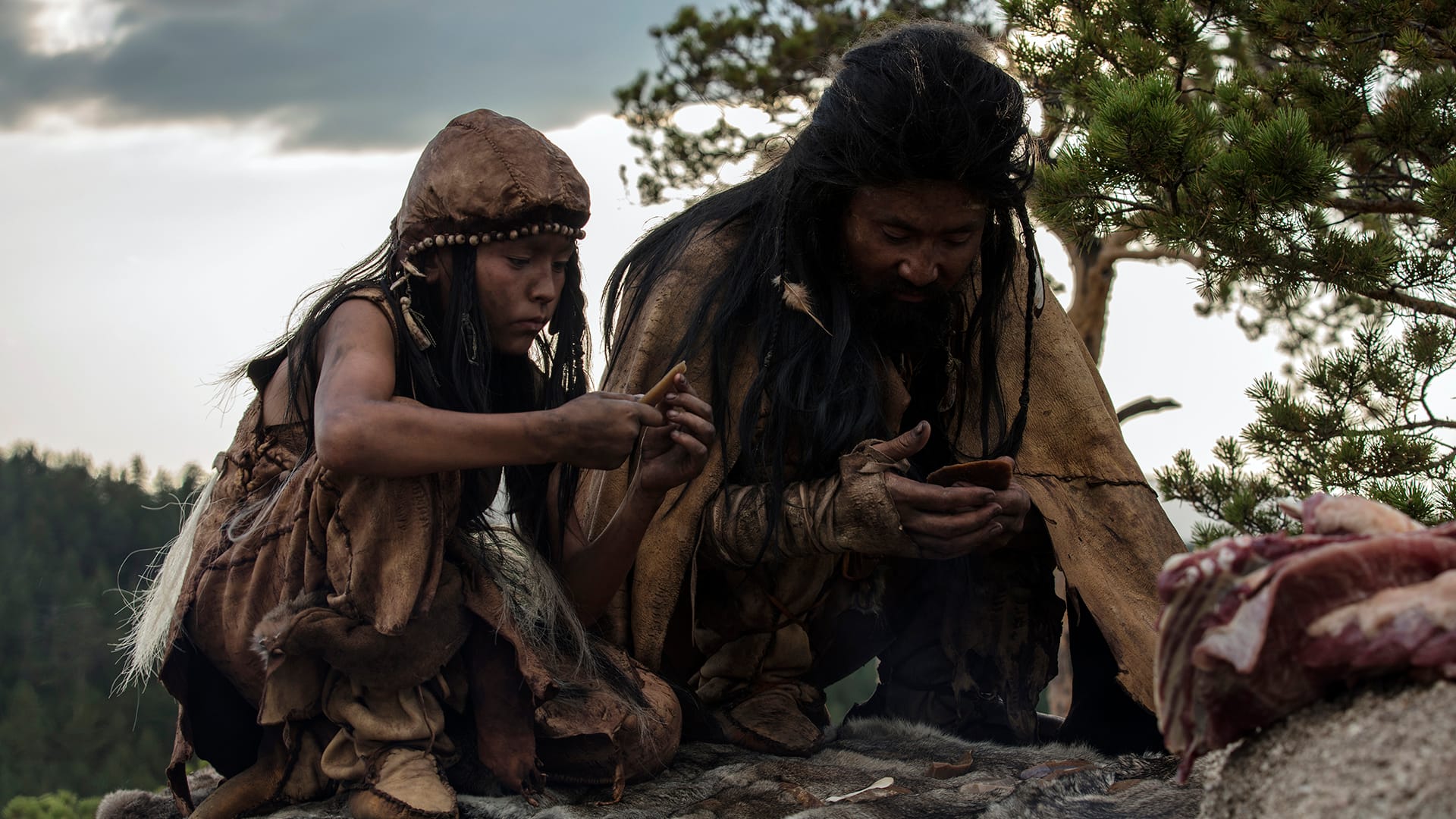 Among the bones of over 300,000 horses at Botai were fragments of pottery with horse milk residue. “That was very exciting. People decided that was the smoking gun. Because you can’t milk a wild mare,” says archaeologist Sandra Olsen.

It’s incredibly challenging to herd wild horses without some means of mobility, so it’s logical that humans must have also been riding them. But what started as a means of chasing down wild horses became a game changer in human history. “You can just travel wherever you want, for almost as long as you want. Cover an enormous amount of ground,” marvels Danish geneticist Eske Willerslev.

Scene from Equus: It was a game changer in human history.

Willerslev calls the domestication of the horse “the most important event in human history.”  With horsepower in their grasp, these first riders should have left a huge mark. For Equus, Willerslev sampled the DNA of the Botai population, and he was astonished at the results. His analysis revealed that the Botai disappeared, leaving no genetic trace behind. Even more surprising, the Botai domesticated a completely different species of horse than the one we know today; they tamed the Przewalski, which we know as a (very aggressive) wild cousin of horses, living in Mongolia. “The results were a total, complete surprise to us,” says French geneticist Ludovic Orlando.

The Botai disappeared from history, but the human-horse story had begun. Other nomads took their place, and they tamed the wild ancestors of all modern horses. The influence of these early riders was immense: their language, their culture and their genes spread across the world, laying the foundations of the world to come. Horsepower made us who we are today.

For the full story, watch the three-part series Equus: Story of the Horse on The Nature of Things.