In Nature? Here’s What Not To Do

Sometimes it really does only take one person to destroy a habitat or put wild animals at risk.

Skiing in the wilderness at Jasper National Park. It seems like an idyllic way to spend afternoon, but parts of the park have recently closed to backcountry explorers. Why? To protect the range of four caribou herds that use the park, explains Alison Ronson, executive director of the Canadian Parks and Wilderness Society in a new film, Manufacturing Wild airing on The Nature of Things on Nov 26.

Each winter, caribou migrate into the mountains were the deep snow pack keeps them safe from most predators. But backcountry use – like skiing, snowshoeing and FAT biking – compacts the snow on trails, allowing wolves to pursue them into their deep-snow habitat.

SCENE FROM THE FILM: Alison Ronson explains that just one person can have a negative impact on caribou in the park

“At the end of the day, I think most people would rather not go skiing if they knew that a caribou could die because of it,” says Ronson,  “There are limits to your freedom in Canada’s wilderness areas that are put in place to protect wildlife and they should be respected.”

Here are some other activities that she says should be avoided when enjoying the great outdoors.

Harassing wild animals to gain glory on social media is a dumb and dangerous game. This June, a video was posted to YouTube of a man jumping off a boat unto the back of a moose swimming across the lake in British Columbia .

Most people didn't find it funny and the man who posted it is now being investigated by the BC government for harassment of wildlife which is against the law in that province.

There are so many stupid selfie stories found online from selfie-crazed tourists preventing sea turtles from nesting in Costa Rica to a bison that attacked a woman who was posing for a selfie at Yellowstone. “Just don’t do it,” says Ronson, “we’re putting ourselves and the animals at risk.” Take your pictures from a safe distance and don't get too close to the wildlife.

It's also not a good idea to stop your car for a photo when you see a moose/elk/deer on the side of the road. These animals are often there near rutting season when they're in search of a mate – and are likely to be more aggressive than usual.

A recent YouYube clip from an Australian videographer showed a large wedge-tailed eagle knocking a drone out of the sky.

The bird could have been defending her babies in a nearby nest.

The reality is that drones are often attacked by birds because they communicate a threat.  Birds may be injured during the encounter and noise from the drones may even cause some species to leave their nests. That’s why most parks have banned drones except for the purposes of scientific research, says Ronson.

Although wide open parks are a tempting place to try out your new toys, be sure to be aware of the risks and follow all signs.

Better known as ‘no service’, random camping happens in backcountry without facilities or assistance in case of an emergency. It's becoming more common as spots at national and provincial parks fill up quickly.

In Alberta, there have been problems in the Castle wilderness area, an important watershed in southwestern Alberta and important habitat for grizzley bears.  Multiple trailers and camp sites are set up for the entire summer, despite a 14-day limit. And people have been cutting down trees to fuel nightly camp fires, which is also prohibited.

It happens all the time and all over the country, says Ronson, but there should be “explicit information so people understand the consequences.” Sometimes, people even set up camp in dangerous areas, like on a sour gas pipeline or a plain known for flash flooding, putting themselves at great risk. Keeping people out of harm’s way is a strain on scarce park resources when more time and money has to be spent on search and rescue. 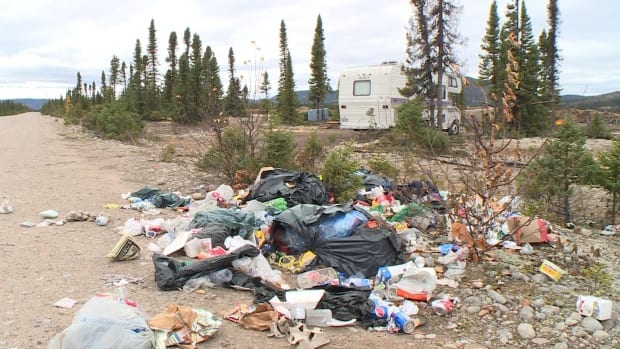 When random camping, make sure you check with the land owner first and follow these rules.

“If you’re in a park, it’s important to stay on the trail,” says Ronson, “marked signs are there for a reason.” A short foray into the forest can scrape decades-old lichens from tree stumps and the forest floor, changing the ecosystem and destroying food for caribou. And taking a shortcut to avoid walking a long switchback uphill is also a bad idea. Over years of use, a path develops, creating a new place for water to flow next rainfall which increases soil erosion and destroys habitat below.

Off-roading can be even worse.  As ATV’s plow through rivers crossings, they release gas and oil which pollutes fish spawning habitat.  The tracks can cause deep ruts and the resulting erosion has destroyed entire riverbeds. 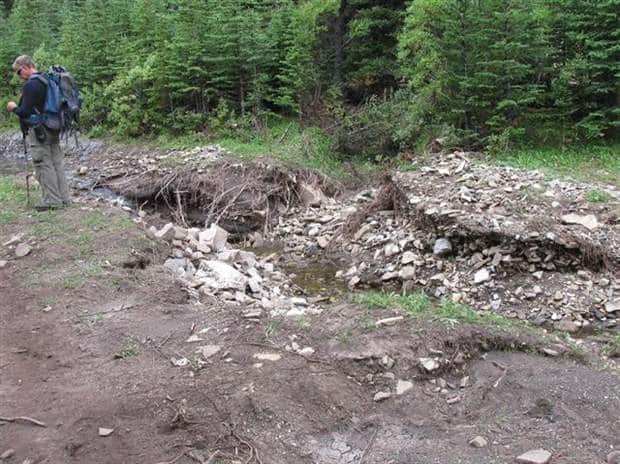 A researcher walks past trail erosion and damage caused by off-highway-vehicles in the Alberta foothills southwest of Edmonton (Sean Nichols, Alberta Wilderness Association)

Nature is ours to enjoy, but individual behaviours CAN negatively impact our wilderness areas and put wildlife at risk. Be respectful of the rules, leave no trace and keep a safe distance from wildlife at all times.