Human Zoos: A Shocking History of Shame and Exploitation

A shameful legacy that echoes into the present — and shouldn't be buried in the history books.

In the late 1800s, colonial exhibits became popular in the western world — exhibits that not only showcased artifacts but actual people. In the era before cinema, these shows allowed westerners to see the foreigners they’d only heard of, and led to huge audiences clamouring for these tableaux vivants.

Or, as they are now called, “Human Zoos.”

In the late 1800s, France had an agricultural site  (Jardin tropical) devoted to the cultivation of plants from the country’s vast empire, showcasing Madagascar, Indochine, Sudan, Congo, Tunisia and Morocco. In 1907, the garden’s fare became part of the Paris Colonial Exposition, and hosted recreated indigenous villages from the colonies to represent what life was like there. Such recreations might have been innocuous, were it not for the display of live human beings. Each village was populated with colonial subjects who’d been engaged as performers, yet were little more than exhibits themselves. The performers were given costumes to wear as they performed non-stop for the audience, their costumes only authentic in that they offered little protection from the elements: Terrible living conditions, foreign diseases, and the cold killed dozens of the performers, who were then buried in the gardens.

The grounds of the fair now sit in a state of eerie disrepair, a site of quiet shame for the French.

Human zoos were not merely a product of the old world; North America had its own. The St. Louis World’s Fair in 1904 was an international exhibition in Missouri that, consistent with other world fairs of the time, was an entertaining spectacle, as well as a means of promotion for both products and industry.

The event boasted a variety of displays, including a 260-ft. Ferris wheel, a pavilion made of corn, and a number of scaled “living exhibits,” including recreated Filipino villages, an initiative of the US Government in the Philippines. The fair featured a 47-acre area of more than 1,000 Filipinos from dozens of tribes. 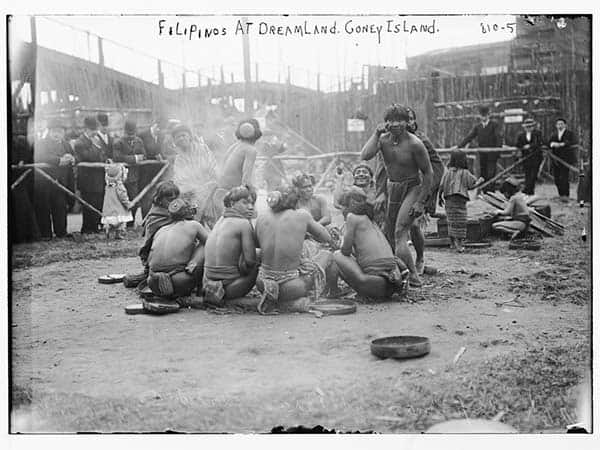 One of the most popular exhibits was the Igorot village, an ethnic group perceived as the least civilized of those on display. An audience success; the revenue from this attraction was said to have surpassed that of all the other villages combined. This exhibition featured indigenous people in minimal clothing and who could often be found eating dog as the audience clamoured for a better look.

While the eating of dog was a sensational curiosity for western audience, it was also a misrepresentation. The Igorot did eat dog, but only did for ceremonial reasons. Yet during the seven months of the fair, dogs were fed to the Igorot daily. The tribespeople also performed infrequent sacred rituals, such as crowing a chief, as daily entertainment, to their delight of the parasol-spinning audience.

Once the fair ended, the popularity of the show continued and members of the Igorot group became fixtures in fairs and carnivals in North America and beyond. But not everyone was charmed. After protests by Filipinos, the US government in the Philippines banned the shows in 1914. 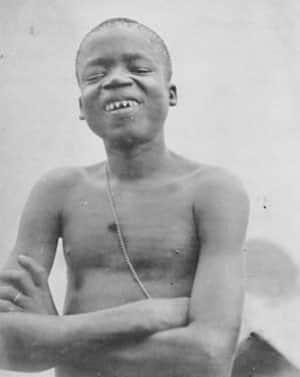 The St. Louis Fair didn’t just display Filipinos; it also featured an exhibit of Africans, including a Congolese man named Ota Benga. After the St. Louis Fair wrapped up, Benga was taken to New York to become part of an exhibition at the Bronx Zoo. He apparently believed he was being hired to care for the zoo’s elephant.

He was gravely mistaken. Touted as a savage pygmy, Benga quickly became a highlight of the zoo, and was displayed in a monkey house. The card outside the exhibit read:

His teeth were filed to points, as was customary in his tribe, and the floor of his cage was littered with bones placed there by zookeepers to make him look more threatening. He played the role of the savage and in time was displayed in a cage with apes, a move championed by amateur anthropologist Madison Grant, then secretary of the New York Zoological Society, and future prominent eugenicist.

The New York Times heralded the exhibit with the headline: “Bushman Shares a Cage with Bronx Park Apes.”  In the body of the article, Benga was identified as “a Bushman, one of a race that scientists do not rate high in the human scale." And the audience came in droves; often 500 people at a time, even thousands a day at the zenith of the exhibit.

But there was growing concern about this kind of display. Alarms were sounded at the Colored Baptist Ministers’ Conference, and a number of prominent pastors were outspoken about what they viewed as a monstrous disrespect. Rev. James H. Gordon, superintendent of the Howard Colored Orphan Asylum in Brooklyn was one of the most vocal opponents of the exhibit. “Our race, we think, is depressed enough, without exhibiting one of us with the apes,” he wrote. “We think we are worthy of being considered human beings, with souls.”

After leaving the zoo, Benga moved back to Africa, yet feeling he no longer belonged there, soon returned to the US. But he found no comfort in America, either. In 1916, he shot himself in the heart.

Brussels and The End of an Era 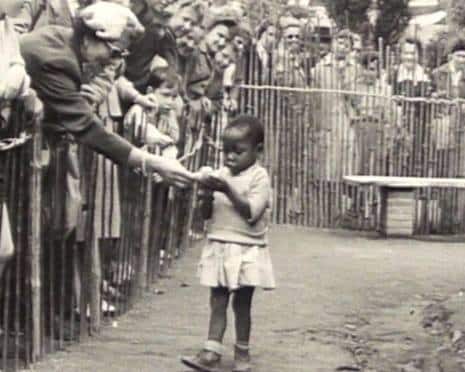 Even into the middle of the 20th century, the practice of human zoos continued. In 1958, the World’s Fair in Brussels featured a Congolese Village, and boasted a picture that’s become emblematic of this phenomena: a young African girl in western dress. She’s fed by the outstretched white hand of a patron. A fence stands between them. A throng of visitors watch.

Luckily, by 1958, the exhibition in Brussels seemed like an outlier; interest in human zoos had waned with the advent of motion picture as people were able to sate their appetites for foreign lands via the silver and small screens. And by the time of the fair in Brussels, the notion of a human zoo was largely considered distasteful and had been banned in most countries.

Yet change didn’t happen quickly enough for those of the Congolese village in 1958. A number of the original 297 died during the show and were buried in a mass, unmarked grave.

Human Zoos of the 21st Century

Even today, there are echoes of human zoos. The reclusive Jarawa Tribe live on India's Andaman Island.

A video released in 2012 showed images of a safari trip to this island in the beautiful Bay of Bengal, now a popular tourist attraction. But the safari didn’t just showcase animals — these tourist trips promised to allow visitors to observe the Jarawa tribe in their natural habitat. The video was the proof of something more troublesome, and more exploitative; it showed islanders performing for the tourists on safari.

These indigenous people had only begun to have contact with mainlanders, and their willingness to interact with the outside world was exploited and resulted in what some groups believed were no better than human zoos of yore.

Video from The Guardian showing police involvement in human safaris

At the entrance of the nature preserve, there was a sign forbidding interaction or “feeding” of the tribespeople, but tourists flooded in by the hundreds daily, with bananas and nuts in hand. While police officers were there to protect the tribe from contact, at least one video revealed a police officer instructing the naked women of the tribe to dance, as food is thrown at them. Reports gathered by The Guardian said that the throwing of food, with the expectation of a performance, was actually routine, not an anomaly.

The government demanded a crackdown on such performances and in 2013, the Indian Supreme Court ordered a complete ban on such safaris. Still, some activist groups claim such activities continue covertly, despite the ban.

2014: Oslo. In celebration of the 200th anniversary of the country’s constitution, two artists staged a recreation of the Kongolandsbyen (The Congo Village), a popular and prominent exhibition of Norway’s World Fair of 1914 mounted a century before. The original exhibition featured 80 Senegalese in “authentic” environments featuring palm roof cabins and was seen by half the population. 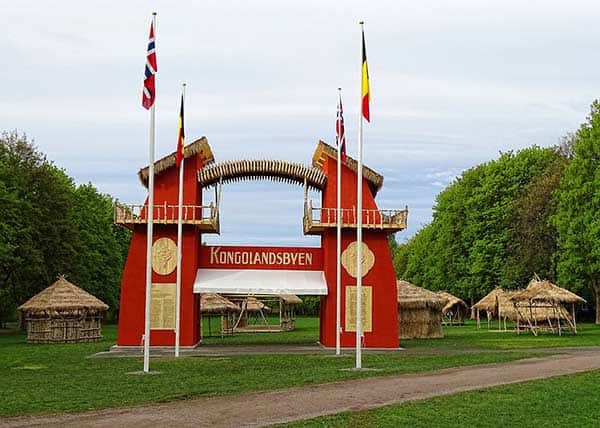 One hundred years later, two artists, Mohamed Ali Fadlabi and Lars Cuzner, recreated the exhibit. Now called the European Attraction Limited, they sought to probe what they deemed Norway’s colonial and racial “amnesia,” and to open up a conversation about the legacy of colonialism. For the recreation, people of all nationalities from around the world were invited to be on display in this post-modern, human zoo.

But the response was not what the artists had hoped for. Many critics said that the exhibit simply affirmed and re-inscribed racist and colonial notions in a world that’s far from “post racial.” Writer Bwesigye bwa Mwesigire asked, “is there any artistic value in the re-enactment of such a dehumanizing spectacle, especially in a world not yet fully healed of racism? Is this an abuse of art??"

In truth, European Attraction Limited did create a conversation about Norway’s colonial history, but it was an angry and fractured one, one that also found the artists on the receiving end of threats from both racists and anti-racists alike.

Though there are echoes of these human zoos around the globe, such shows are widely condemned. Yet as these pavailions and villages lay in ruins, or only existing in faded posters, there are those who argue these shameful episodes from of our history should not be simply effaced or forgotten, but should stand as a testament to a shameful, and often uncomfortable past.