How Much Should Pet Owners Spend to Save Their Sick Pets?

"At the end of the day some owners are prepared to do whatever it takes, whatever it costs to keep their pet alive. After all, it’s only money," says director Liam O'Rinn. Liam O'Rinn

Working on Pets, Vets, & Debts was an eight month emotional roller-coaster ride – the highs: happy owners and healed pets reunited after a stressful separation – the lows: the inevitable stories with no happy ending. The journey began at the Toronto Veterinary Emergency Hospital, a place I was familiar with – as a client. I had been there on a few occasions with my beloved American Cocker Spaniel, Sophie. This time it was all behind-the-scenes, shadowing Dr. Michael Ethier ona 12-hour shift in the Critical Care Unit.  His first order of business is doing the rounds to check on all his patients. At 7:00 am, there were six dogs there with varying issues in different stages of treatment. I was hoping to find a complete story – one with a beginning, middle and end that could be used as an on-going narrative throughout the doc. Dexter, a twelve-year old Golden Retriever, was that story.

SCENE FROM THE FILM: Dexter's owners bring him to the critical care unit.

I am constantly amazed by the generosity of strangers. Dexter’s owners, Jonathan and Melissa Hirst were absolutely distraught. They had just learned that Dexter, their “first child” as they called him, had, at best, eight to nine weeks to live. Anyone who has been in their position knows the agony they were going through. They had nothing to gain by talking to me – but they did. And they were refreshingly open and honest and didn’t hold back. I’m pretty sure I couldn’t have done the same.

"You can’t put a price on that kind of love.  And that love was evident in every facility I visited. You would have to love animals to do this kind of work."

I spent two days at TVEH. As well as the obvious bouts of sadness and joy, there were occasional moments of humour. Bear, a Mastiff was admitted because he had swallowed his owner’s make-up purse.   The owner wasn’t exactly sure what was in the purse, and so, to find out, Bear was given a safe dose of poison. Sure enough, right on cue, Bear threw up the entire contents of his stomach.  I’m sure he’s learned his lesson – until next time.  A young technician had the unenviable task of going through the mess to see if there was anything dangerous. There wasn’t.  The vet business isn’t all glamour.  But it IS a business.   And pet healthcare can be expensive – in the tens of thousands of dollars.

Why is pet care so expensive?

While making this film, I met many people with varying points of view on the subject of spending money on pets. The fact of the matter is most things in life require spending money: your car, your house, your children and certainly your pets. But why is pet healthcare so costly? When compared to human healthcare in Canada – which of course is free – it is expensive. And there are several reasons for that. 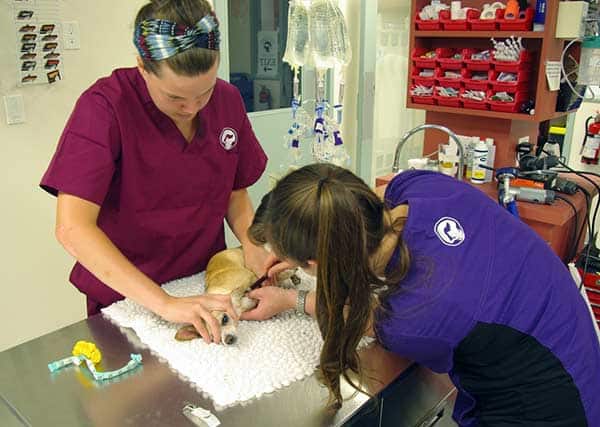 The staff at TVEH at work.

Just like doctors who practice human medicine, vets spend several years studying to be recognized in their profession. Many – certainly those who choose to work in a hospital environment – spend many more years specializing in a particular field. Obviously, they expect – and deserve - to be paid a decent salary. I spent time in three different 24-hour emergency hospitals. One thing becomes very clear, very quickly – these are real hospitals with all the equipment – MRI, X-Ray, Ultrasound etc. – you’d expect in a real hospital. Even though most of the equipment is bought second-hand from human hospitals, it doesn’t come cheap. And then there’s the staff.

In addition to the team of veterinary specialists, there are administration personnel and an army of support staff in the form of vet techs. The vet techs are amazing in their dedication to the animals in their care. There was one young woman who stood with a dog who had been hit by a car for more than three hours without once stepping aside. She monitored the sedated mutt, spoke to him gently and stroked his matted hair while the owners (in a consulting room) agonized over what course of action to take. Anyone who loves dogs knows just how quickly it is to bond with an animal. That dog didn’t make it. The vet tech cleaned him up and stayed with him as he was euthanized. And that is pretty much an every day occurrence.

You can’t put a price on that kind of love.  And that love was evident in every facility I visited. You would have to love animals to do this kind of work. As for the money aspect, every vet was more than happy to speak openly about costs. It is a concern for them. Some people can’t afford costs and they are quick to recognize that. My own personal experience has been that right from the start they were upfront about the costs and presented all the options available. It’s up to the individual to make choices based on their wants and means. And at the end of the day some owners are prepared to do whatever it takes, whatever it costs to keep their pet alive. After all, it’s only money.