Filming a Family of Red Foxes

I encountered my first close-up experience with a red fox in NFLD, in one of those chance meetings where you look up and lock eyes with someone. Susan Fleming, Co-Director

Each summer I dream of Newfoundland.

I hear the deep sounds of whales blowing out on the ocean as I fall asleep. I daydream about the comical and improbable ability of fat little puffins to become airborne like colourful bumblebees.  And I long to lie on my belly for hours watching a red fox family play in an idyllic meadow perched on the edge of the world. These are my Newfoundland dreams. 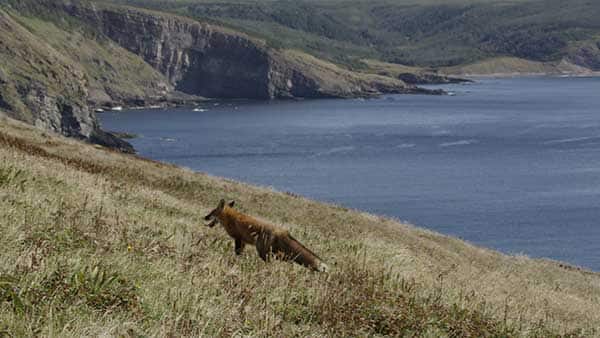 The last became a reality, when I stumbled upon a red fox den as I trudged along the Skerwink Trail late one summer afternoon. The Skerwink is a remarkable hiking trail in Port Rexton,  NFLD that climbs high above the crashing ocean and looks out over sea stacks with names like the Naked Man, Music Box and Flat Fish.

I encountered my first close-up experience with a red fox there, ten years ago in one of those chance meetings where you look up and lock eyes with someone. I didn’t want to move for fear that the lovely creature in front of me would run away and after a moment of taking me in and with a flick of her white tail she did just that.  I spent the next week of my vacation returning to that spot to search for her. I never saw her again that summer but I did see her pups, frolicking on a 500-foot wide grassy meadow filled with den holes on the edge of the ocean.  It was the most unlikely of den sites but the filmmaker in me knew this place was like no other so in 2016 I returned with a film crew in tow.

Our plan was to spend the next six months filming the life story of a family of foxes as their pups grew up in this idyllic location for The Nature of Things documentary Fox Tales. Before we could even set up our cameras, however, it became apparent that after over a decade in residence and many summers under my happy gaze, the foxes had moved out of their special den on the edge of the world.  So we set off to find them. 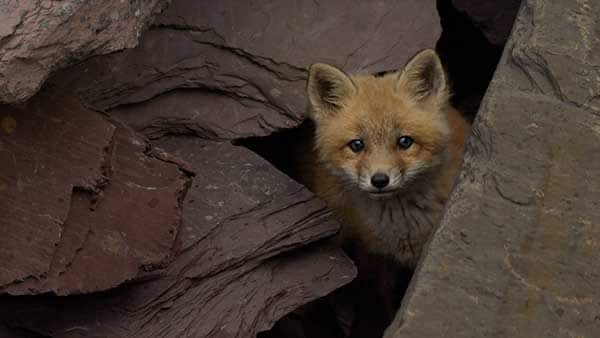 Red fox pokes its head out from an oceanside den in NLFD.

One thing I have learned after 25 years as a documentary filmmaker is that you have to treat every setback as an opportunity – otherwise you’ll loose your mind.  After weeks of sleuthing and animal tracking we regretfully did not find the Skerwink fox family’s new den but as luck would have it we found another fox family nearby that had an even more impressive and visually spectacular oceanside den.  This new spot was much more secluded and required long lenses and endless patience to be a suitable filming location but after three weeks in the field we got our first footage of wobbly legged pups emerging from their den and we all breathed a sigh of relief.

This first hard-won footage solidified that this remote rocky outcrop 100 meters above the crashing ocean was to be home not just to these pups, but for my crew and I as well, for the next six months.

Watch the video above to see how Susan Fleming and her crew worked to capture never-seen-before footage of red foxes around the world.