Dolphins are known to be incredibly social creatures with close family ties and established communities. Is it possible that they are seeking our friendship too?

When Conversations with Dolphins opens we see some breathtaking footage of Adam Walker, a British endurance swimmer who swam the "Oceans 7", the toughest seven channels in the world. When he swam across the Cook Strait off New Zealand, he noticed a two metre shark swimming beneath him in the dark waters. The shark never got a chance to attack because a group of dolphins suddenly appeared and swam with Walker for three hours.

SCENE FROM THE FILM: Adam Walker swims across the Cook Straight

We can't be sure why the dolphins appeared but it's possible that they were protecting Walker from an attack by the shark. The internet is awash with stories of dolphins “saving” humans. There are first-hand accounts of dolphins charging at sharks to ward them away from humans and stories of dolphins that, allegedly, located lost swimmers and guided them back to safety.

History of Dolphins and People

Stories of a special connection between dolphins and humans go back to Roman times. In the year AD 77, Pliny the Elder wrote about a boy who befriended a dolphin he called Simo by giving him bits of bread. In return, Simo gave him rides – that is until the boy fell sick and died.

“The dolphin came to the same spot as usual, with a sorrowful air and manifesting every sign of deep affection until at last, a thing of which no one felt the slightest doubt, he died of purely sorrow and regret.” 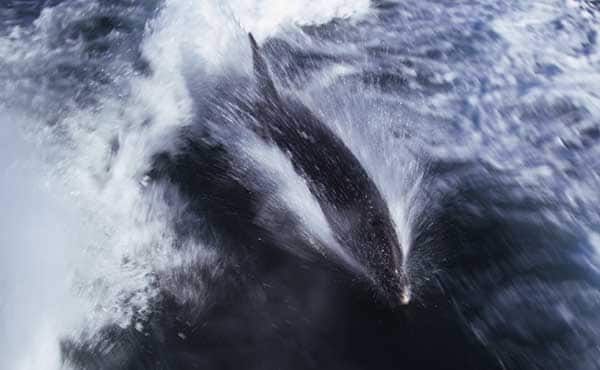 Fungie frolics in the waves off the coast of Dingle, Ireland

The Most Popular Dolphin in Europe

In 1983, locals in the town of Dingle, Ireland noticed a bottle-nosed dolphin, whom they named Fungi,  living in the harbour. He liked to appear alongside boats, and actively sought the company of humans. Over 30 years later, Fungi is still very much a local resident, showing up when boats appear, leaping out of the water with apparent joy. In June 2016, he suffered a deep gash due to a run-in with a propeller blade but seems to be recovering nicely.

Wild dolphins who appear to seek out human companionship have been reported all over the world. Dolphins are known to be incredibly social creatures with close family ties and established communities. Is it possible that they are seeking our friendship too?

The documentary Dolphin Boy tells the story of a young boy who was so severely beaten by other boys that he completely disassociated from reality. His family, desperate for a breakthrough, took him to participate in a dolphin therapy program in Eilat, Isreal. The dolphins, who were free to come and go as they pleased, seemed attracted to him. Slowly, he began to communicate, trust and love again.

Dolphin therapy programs like this one have been popular since the 1970s and have been used to treat children with cerebral palsy, autism and PTSD.

Some stories of dolphin-human encounters are a little easier to understand.

Fishing with the Dolphins

In Laguna, Brazil, fishermen and dolphins hunt together. Dolphins use their speed to herd large schools of mullet towards the waiting fisherman in the shallows. When the dolphins begin to dive, the fishermen throw their nets which disorientate the fish long enough to break formation. Both species benefit from the feast and the fisherman are always careful to ensure the dolphins get a fair share in return for their assistance.

In Conversations with Dolphins, we meet Martina Wing a diver who was leading a tour of the local manta rays off the coast of Hawaii when one of her team, diver Keller Laros, was approached by a dolphin that had a fishing line hooked into his fin. As the dolphin waited patiently, Laros removed the hook and then used a knife to cut him free of the line.  The entire incident was captured on film.

SCENE FROM THE FILM: Dolphin comes to a human for help

Scientists are quick to point out that friendly encounters with humans involve bottlenose and spotted dolphins, the two species that live in shallow waters near to us. Most of the other 38 species rarely interact with people

While there have been very few documented encounters of aggression between dolphins and humans, they are large wild animals who are capable of doing us harm. They can turn aggressive when harassed or when they feel their group is at risk. That’s why the US Marine Mammal Protection Act prohibits feeding or interacting with wild dolphins and other creatures of the sea.

Our friends? It’s hard to say and we may never know. But it’s clear that dolphins appear to be as curious about us as we are of them.