Jumbo’s skeleton was taken out of storage and examined by a team of international scientists. Dugald Maudsley, Producer

It was David Attenborough’s idea.

He’d always wanted to do a documentary about Jumbo the elephant — the world’s first animal superstar — who died in St. Thomas, Ontario under controversial circumstances more than 130 years ago.  Now, Sir David’s longtime collaborator, natural history producer Stephen Dunleavy, was ready to make it a reality.

MORE:
Jumbo: The Life Of A Elephant Superstar
New Research Shows That Elephants And Other Animals Can Suffer From PTSD

And Stephen had a brilliant idea. He’d heard that the American Museum of Natural History once had Jumbo’s bones on display, but had long since put them in deep storage.

Examine Jumbo's skeleton to answer questions about his death

Stephen’s plan was simple: recruit a team of scientists, get access to the bones and use the latest technology to examine Jumbo’s skeleton to solve the many mysteries that still swirl around this famous elephant: how did he die? Was he really the biggest elephant in the world? And was he suffering from tuberculosis?

It took nearly 18 months to negotiate access, establish what the scientific team could do and organize the logistics of taking Jumbo’s bones out of storage where they’d been for decades.

While that was going on Stephen contacted me.  Did I think the CBC would be interested in a documentary about Jumbo the elephant? “He died in St. Thomas, Ontario,” Stephen offered helpfully.  I didn’t even pause: “Absolutely,” I said.

Within weeks The Nature of Things was on board.  David Suzuki would host, while David Attenborough would present the British version of Jumbo: The Life of an Elephant Superstar.

Assembling a team of crack scientists around the world

We still had to bring together a group of skilled scientists for the investigation. In the end, we assembled a crack team of experts from the UK and Canada, knowledgeable in the fields of paleopathology, biomechanics and ancient DNA analysis.

This past summer, the American Museum of Natural History carefully uncrated Jumbo’s entire skeleton – the skull alone weighs 150 kilograms.  Our team spent a week examining it, and took samples of Jumbo’s bones for the critical DNA and isotope analysis. 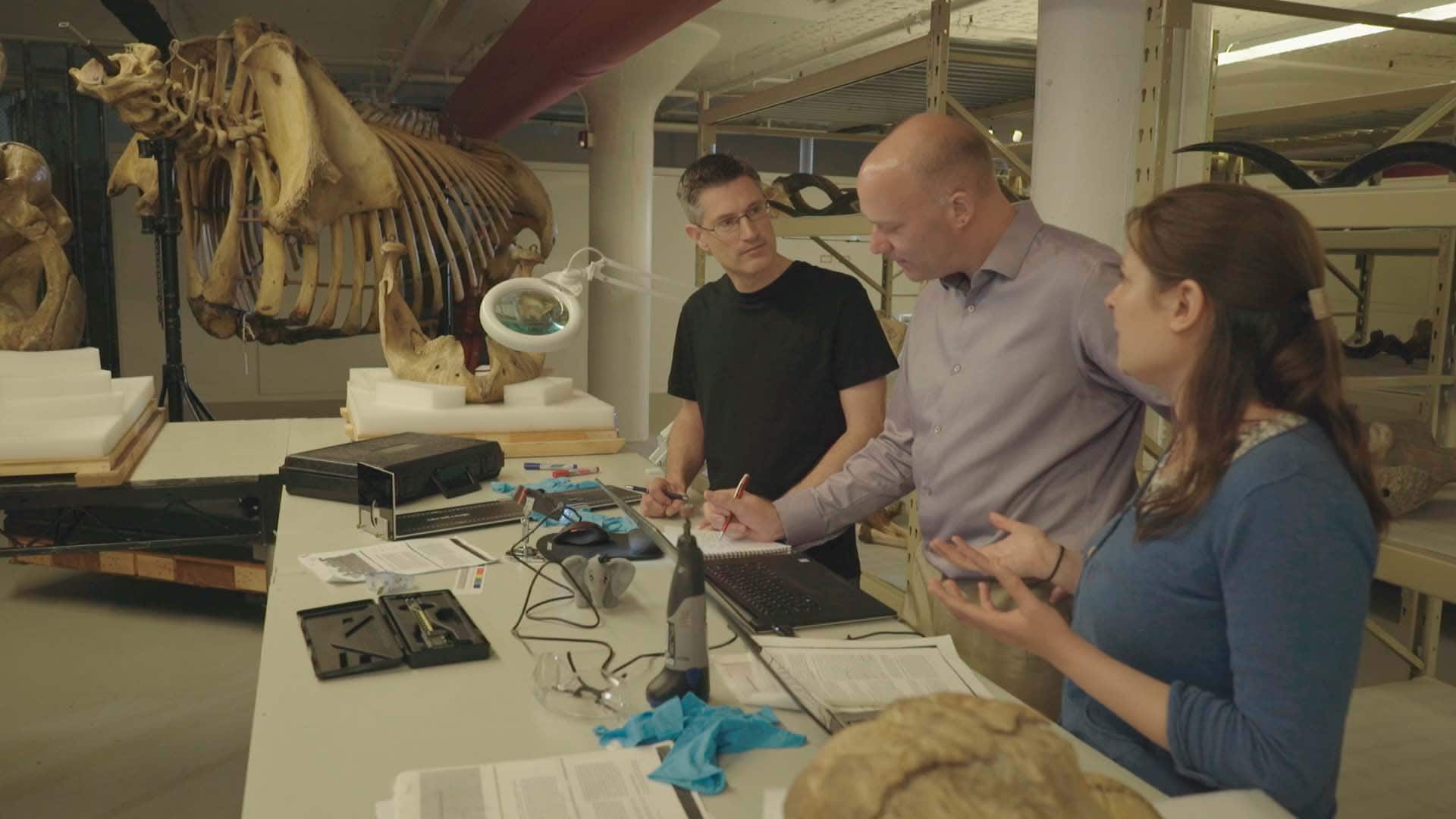 The scientific team examines Jumbo's bones at the American Museum of National History.

Then disaster struck:  we couldn’t get the samples out of New York City.  We hadn’t counted on the stringent rules that now exist to combat animal trafficking.  It took months to get our tiny bone shavings to the Ancient DNA Centre at McMaster University in Hamilton and to isotope expert, Holly Miller at the University of Nottingham.

Was Jumbo the biggest elephant in the world?

In the end, the results were fascinating.  Not only did they solve a conspiracy theory, but they also told us what kind of food Jumbo was eating when he was first captured, what his diet was like near the end of his life and whether he suffered from tuberculosis as so many people claimed.

Our team of experts also solved another key mystery.  P.T. Barnum, of the Barnum and Bailey Circus, bought Jumbo for the equivalent of $250,000. A master showman, Barnum always claimed Jumbo was the biggest elephant in the world.

But was he? By examining his skeleton our scientific team had the answer.

In the end Jumbo: The Life of an Elephant Superstar created original science that solved key mysteries that have surrounded Jumbo for more than 130 years.  At the same time, our scientific exploration also gave us an opportunity to tell the story of this amazing creature who was, in his time, the most famous elephant in the world.