100 million years ago, Alberta was a giant sea, surrounded by tropical forests

Dinosaurs walked the Earth during that time, leaving behind some remarkable fossils. Graham Duggan

Nestled in Alberta’s badlands, the Royal Tyrrell Museum houses some of the world’s most incredible fossils of prehistoric life.

In Dinosaur Cold Case, a documentary from The Nature of Things, we get a look at one of its most remarkable specimens: the extremely well-preserved fossil of Borealopelta markmitchelli, a nodosaur that roamed Alberta 110 million years ago. It was discovered in a layer of rock that experts believe was once the bottom of an expansive sea — in Alberta.

Indeed, life in Western Canada back then was a far cry from the sweeping prairies and sprawling farmland we know today.

Alberta during the Cretaceous was a very different place

In Drumheller, Alta., the badlands take us back in time. Exposed layers of rock show us what Canada was like during the Mesozoic era, a pivotal time in Earth’s history.

The last 79 million years of the Mesozoic were particularly incredible — it was the age when dinosaurs dominated. Those years are known as the Cretaceous period, the longest portion of the Mesozoic era, which ended approximately 66 million years ago (after a meteor strike, many scientists believe, eliminated the majority of life on Earth).

For most of the Cretaceous, Canada’s prairie provinces were sitting deep underwater. A giant inland sea cut right across North America.

Known as the Western Interior Seaway, it ran north to south, connecting the Arctic Ocean with the Gulf of Mexico. It essentially cut the continent in two, separating two large land masses — Laramidia in the west and Appalachia in the east — and isolating them for around 60 million years.

WATCH: Alberta was once a giant inland sea.

The seaway was a warm, relatively shallow body of water (it only reached around 760 metres at its deepest points) that never stood still — its shorelines and size were constantly shifting over time.

The foothills of the very young Rocky Mountains formed a lush coastline along its western edge, and in the lowlands, tropical forests harboured rivers and creeks, marshes and wetlands. The expansive sea would have absorbed heat in the summer months and released it in the cooler months, helping to maintain the temperate and humid conditions of the period.

The Cretaceous was a world of diverse flora and fauna

Borealopelta sported some serious armour — thick bony plates and lethal shoulder spines that protected it from attack. But what was out there to attack it?

When it comes to dinos during that time, if you’re thinking Jurassic Park, think again. When Borealopelta lumbered around North America 110 million years ago, more recognizable dinos like the Tyrannosaurus rex or Triceratops didn’t exist. In fact, they wouldn’t be around for another 40 million years or so! (A smaller, lighter ancestor of T. rex was found during this period, but it weighed only 90 kilograms and was as tall as a human — not exactly the fierce predator it would come to be.)

Different dinos were on the hunt during the Cretaceous, including the Utahraptor, a 450-kilogram, highly intelligent and incredibly fast species that probably lived in groups and may have hunted in packs. But Borealopelta’s biggest threat would likely have been Acrocanthosaurus, the top predator at the time, which boasted powerful arms, clawed fingers and enormous blades for teeth.

Giant pterosaurs, some the size of a small modern aircraft, were another common sight during Borealopelta’s lifetime, soaring through the sky and fishing in the productive seas. They had to share airspace with some relative newcomers though — birds. They evolved from theropod dinosaurs during the Jurassic period millions of years earlier, rapidly diversifying and becoming accomplished fliers during the Cretaceous.

In the shallow seaway, fish and sharks swam alongside giant sea turtles and plesiosaurs, long-necked marine reptiles. While on land, it was a world of new colours as flowering plants arrived, and evolved new and beautiful ways to attract insect pollinators.

Our early ancestors were just getting a foothold during the Cretaceous, too. Squirrel-sized mammals were running around alongside Borealopelta, finding their way in the world. Luckily for us, early mammals like these managed to survive when dinosaur life came to an abrupt end.

MORE:
Face to face with a perfectly preserved dinosaur that looks like it was alive yesterday
"Destroyer of shins" — a newly discovered dinosaur may have used its armour for more than defence
Sexing a fossil that's millions of years old

The environment made for perfect preservation

Alberta and its neighbouring states to the south are almost bursting with incredible dinosaur fossils. The Royal Tyrrell Museum alone possesses more than 160,000 specimens in its stores, many of which remain in protective plaster, waiting to be fully examined.

This part of North America is a treasure trove of fossils because of an ideal combination of conditions during the Cretaceous. Freshwater from storms would have washed animal remains into lakes and rivers, helping to preserve them in oxygen-poor environments. Sediment runoff from the mountains helped to cover their remains, sealing them under layers of protective rock.

In Dinosaur Cold Case, the mystery of Borealopelta’s death and near-perfect preservation is unravelled. After drowning in a flood, researchers believe, its body floated far out to sea before sinking to the bottom where it came to rest for over 100 million years. 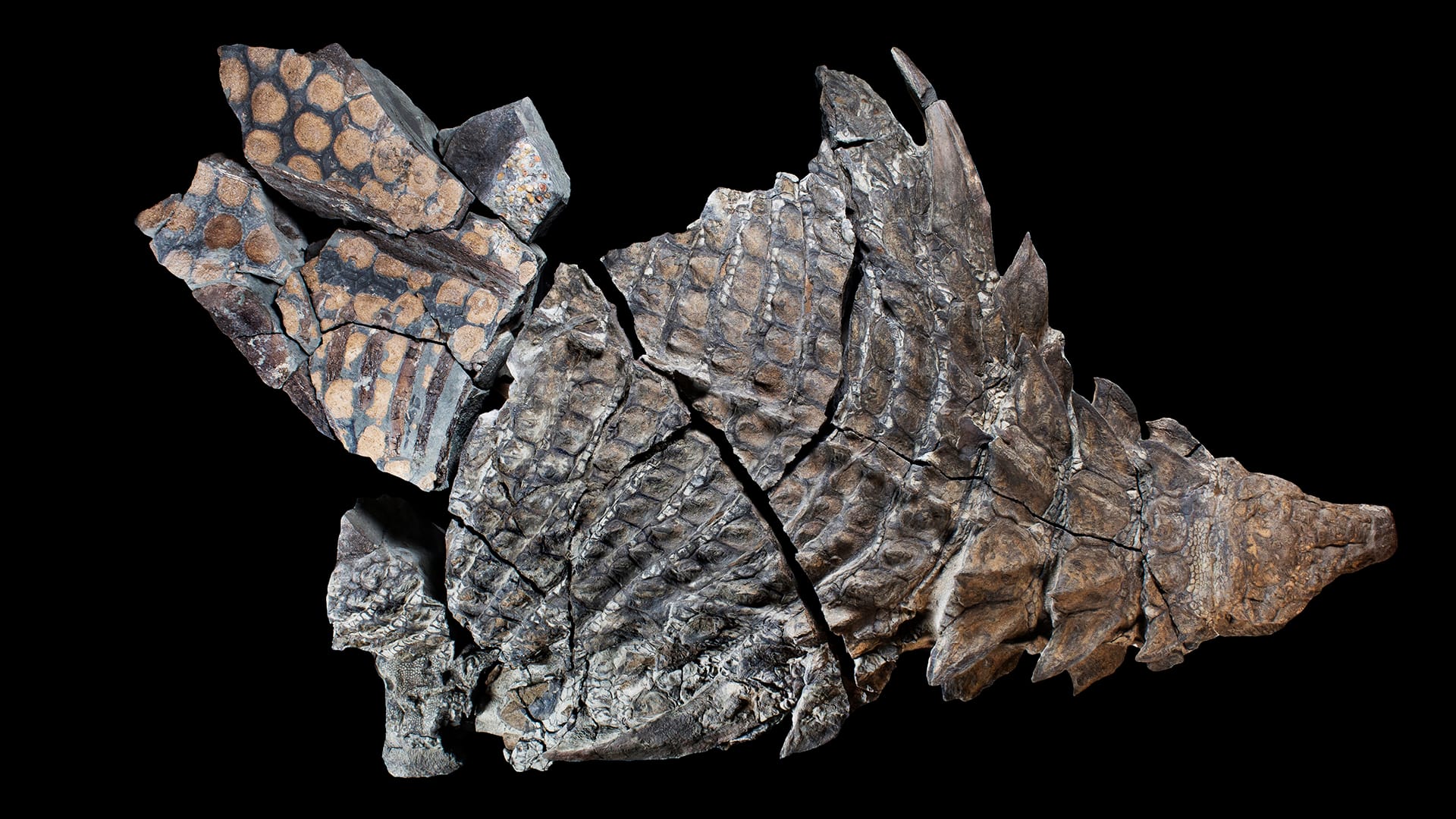 The body of Borealopelta is in incredible condition after 110 million years.

Much of our knowledge of dinosaurs comes from Laramidia, to the west of the giant inland sea. Geologic formations in Appalachia were scraped away by glaciers during the ensuing ice ages, leaving us with only half the picture of North America’s ancient life.

Still, Canada’s prairies are full of clues about the continent’s past. The productive agricultural land harbours rich oil reserves — more enduring remnants of the animals and plants that thrived in North America during this spectacular period in Earth’s history.

Watch Dinosaur Cold Case on The Nature of Things.