The Secret Life of Owls

A unique window into the mysterious world of the Great Horned Owl, taking us across North America to meet passionate owl experts, volunteers, scientists and the owls they love. NOW STREAMING ON CBC GEM
Available on CBC Gem 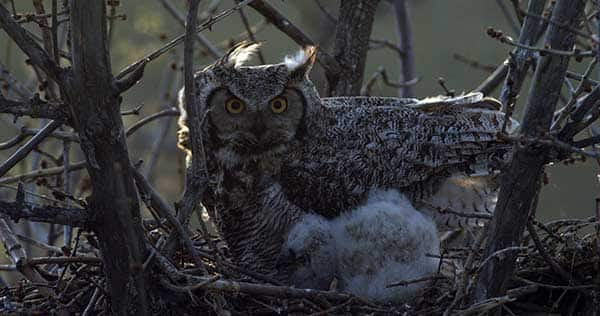 We all recognize the trademark hoots of the great horned owl. But how many of us have seen one up close? The great horned owl lives all over the Americas, from rural countryside to bustling cityscapes. Yet it’s rare to catch a glimpse of this elusive bird of prey. The Secret Life of Owls gives us a window into the life of this amazing species and introduces us to some passionate owl experts along the way.

In rural Wisconsin, we’ll meet Robbie, a great horned owl under the care of Neil Rettig and his wife Laura Johnson. Neil is a renowned wildlife cinematographer and dedicated falconer. Laura is a veterinarian who specializes in rehabilitating birds of prey. Neil and Laura are committed to helping Robbie learn to fly and hunt and work with him over several months to improve his skills. Their close relationship to Robbie provides an intimate access to a great horned owl in ways never before seen.

SCENE FROM THE FILM: Robbie, a young owl, learns to fly.

“It’s great to have one of the most amazing, ringside, front row seats into the natural world.”
- Neil Rettig, wildlife cinematographer and falconer

Karla Bloem is an owl expert in Minnesota with a very unusual roommate: a 20-year-old rescue owl named Alice. Inspired by Alice’s hooting, Karla started decoding owl communication and has made some remarkable discoveries.

"There’s territorial hoots, there’s emphatic hoots, there’s staccato hoots, there’s greeting hoots…and to understand that sheds so much more light on what’s going on with those birds and their behaviours.”
- Karla Bloem, Executive Director of the International Owl Center.

In the Canadian prairies, we follow Dr. Martin Gerard as he leads a bird banding expedition. Martin, a medical doctor, volunteered for his first bird banding trip 32 years ago and never looked back. We’ll watch as he and his fellow owl enthusiasts clamber up to remote nests and wrap silver bands around the legs of owlets. By banding the young each spring, these citizen scientists keep track of nest productivity and brood size. Their nest visits also give them insight into the diet of the great horned owl. Leftovers in the nests and regurgitated pellets left behind reveal clues to the extraordinary variety of prey targeted by these adaptable birds.

At one of the top raptor rehab centers in North America, we’ll meet Rob Hope and his team as they face an emergency: Two owlets were orphaned when their nest fell apart in a local park. Without intervention, they won’t survive. We’ll follow the two-week-old orphans as they grow up at the facility. Their best shot at recovery and eventual release falls to a rescue owl named Casper, but that will depend on whether she takes them under her wing.

In Southern Alberta, we’ll get an intimate look at a wild owl family. Through rarely seen nest site footage, shot using a special infrared filter for night shooting, we’ll witness a trio of owlets as they develop through the seasons, from helpless two-week-olds, to fledglings taking their first tentative flights, to young adults about to launch into independence.

Through The Secret Life Of Owls, we will witness the power and wonder behind one of nature’s most fierce and formidable hunters.