The Brain’s Way of Healing

The brain can not only change itself, but it can also heal itself in ways we never thought were possible. Dr. Norman Doidge looks at how energy — light, sound, electricity and motion — awaken the brain's own capacity to heal. NOW STREAMING ON CBC GEM
Available on CBC Gem Seven years ago Dr. Norman Doidge introduced neuroplasticity to the world – the idea that our brains aren’t rigidly hardwired as was once believed, but that they can change, and can be rewired.  Indeed, what is unique about the brain is that its circuits can, through mental experience and activity, form, unform, and reform in new ways.

Now he’s back with a new film, The Brain's Way of Healing, that will show that not only can the brain change, but that we can use our knowledge of how the brain forms new connections to help it heal in ways we never dreamed possible.

The Brain's Way of Healing is about neuroplasticity’s next step — healing the brain using totally non-invasive methods, including patterns of energy to resynchronize the brain's neurons when illness or injury causes them to fire improperly. It’s revolutionary and in some instances shocking — we’ll see people’s lifelong afflictions improved, or, in some cases cured almost miraculously. But these are not miracles, and Dr. Doidge explains the science behind these improvements.

You’ll meet a man in South Africa who has “walked off” the symptoms of his Parkinson’s disease, and a pair of women in Illinois who overcame their traumatic brain injuries with a device that electrically stimulates the nerves in their tongues – nerves that go right to the brain. “This is life again. This is life,” says Kathy Nicol Smith, who was injured in a car accident. “And that's what it gave me. It gave me back life.”

SCENE FROM THE FILM: Kathy Nicol Smith gets her life back using PoNS therapy.

You’ll see the stories of two young men in Ontario whose autism was treated with sound therapy — sounds that helped them reshape their brains, and a woman in Boston who was born with a debilitating brain defect, yet went on to live a normal life thanks to the Feldenkrais Method, a system developed by an Israeli physicist that uses somatic touch to rewire the brain’s maps.

“The way I like to think of it,” says Elizabeth Natenshon, who was born missing a third of her cerebellum, the part of the brain responsible for 80 per cent of movement, “is that, every movement I do, every movement I know, was introduced by Feldenkrais. I didn’t really have movement until he found me.” 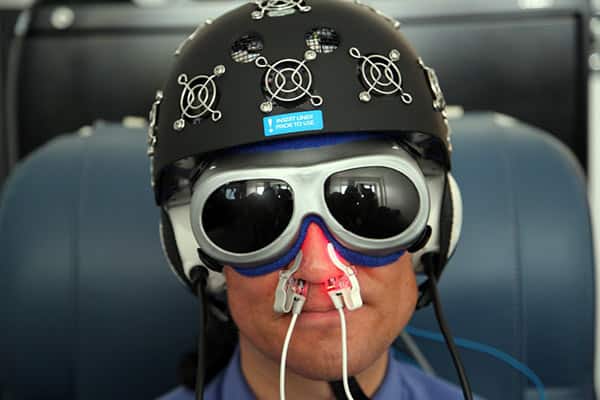 The interventions this film make use of energy — including light, sound, vibration, electricity, and motion. “These forms of energy,” says Doidge, “provide natural, noninvasive avenues into the brain that pass through our senses and our bodies to awaken the brain’s own healing capacities.”

The Brain’s Way of Healing is about how science and medicine are looking at the brain in different ways and discovering that permanent, lifelong and even life-threatening ailments and diseases can now be dealt with — and in many instances done away with.

MORE:
Can Tiny Eye Movements Restore Vision?
Can LED Light Heal the Brain of PTSD Victims?
How 'plastic' brain can heal from traumatic injuries: Dr Diodge talks to The Current

The film is about Doidge’s own quest to reveal this new front in restorative neuroplasticity and show us how people are finding hope where no hope existed before. Doidge is the host and tour guide and he will be giving us the nuts and bolts of neuroplasticity, told through the incredible stories of amazing recoveries.