On the remote shores of Sable Island, N.S., we meet the world’s largest breeding colony of grey seals and the people who study them. NOW STREAMING ON CBC GEM
Available on CBC Gem

Sable Island, Nova Scotia, is a remote, almost mythical landscape in the northwest Atlantic that’s famous for its wild horses. But what many people don’t know is that it’s also home to the largest breeding colony of grey seals in the world. Every winter, tens of thousands of female seals head to Sable to give birth. In 2016 alone, more than 80,000 pups were born. Huge males arrive too, ready to fight for the right to breed with their chosen female.

The winter pupping and breeding season also signals the arrival of the seal researchers, including a diverse team of scientists led by biologist Nell den Heyer from the Department of Fisheries and Oceans (DFO). It’s a race against the clock for the researchers; they only have a short time to find and record data from roughly a thousand marked seals along with their pups. They’ve followed many of these animals for more than 30 years.

Once hunted to near extinction, the grey seal population is thriving today. Grey seals have few predators and don’t depend on a single type of prey, eating an extremely wide variety of fish, crustaceans and even octopuses. Some commercial fishermen blame grey seals for the slow recovery of groundfish stocks, but scientists still don’t fully understand how the seals forage or what impact they’re having on fish stocks.

Marine biologist Damian Lidgard has been photographing and observing seals on Sable Island for more than 20 years. He specializes in deploying satellite and acoustic devices, and his goal is to use underwater cameras to record the seals deep in the ocean foraging for food. “Grey seals spend most of their lives at sea, only coming to land to rest, moult and give birth,” says Lidgard. “There are so many unanswered questions about them and their world.”

Though we see Lidgard and the DFO team unsuccessfully deploy a camera on a grey seal, they’re willing to give it another try. We watch the researchers attach newly designed cameras to two female seals, Kate and Fiona. The cameras need to be as tough as the seals to endure six weeks at sea and constant changes in pressure. 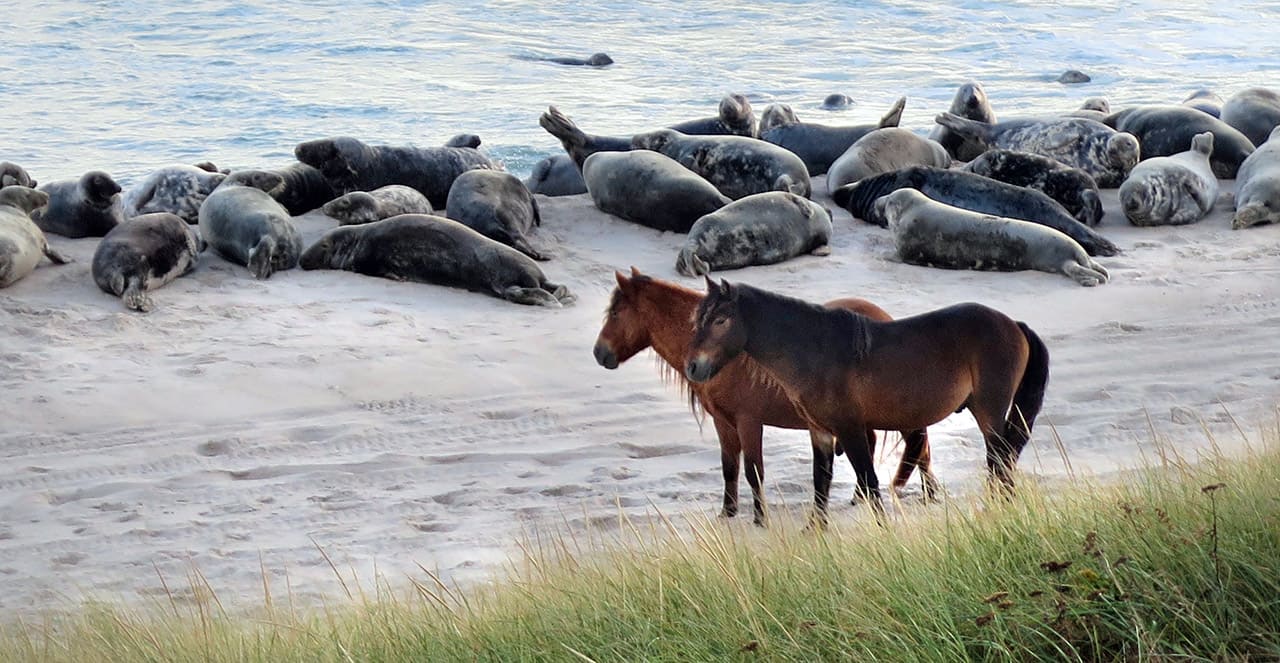 As Lidgard and the team wait for the seals to return, we get an intimate look at the life of the grey seal. We experience the birth of pups and witness the large, aggressive males battling for access to females. It becomes clear why Sable Island is considered one of the most compelling natural laboratories on Earth.

We can see what the seals do on land, but what they do at sea is still a mystery. That is, until Kate and Fiona return to the island with their cameras in tow. Lidgard and the researchers now get to see grey seals foraging in the dark depths of the Atlantic, but what they’re doing isn’t quite what the team expected. Instead of chasing after schools of fish, the seals are captured digging their noses along the ocean floor, eating small, eel-like fish called sand lance.

The seals of Sable Island have become an important extension of our understanding of Canada’s East Coast marine ecology — and we’re only just beginning to explore their watery world.

Directed and Produced by

Cinematography and Drone Footage by

A SPECIAL THANK YOU TO

Department of Fisheries and Oceans Canada

Developed with the participation of

The Nature of Things with David Suzuki

Filmed on location with the permission of