Travel from Newfoundland’s rocky shores to Maine and Wales to meet the colourful and intriguing Atlantic puffin and learn what these intriguing little birds can teach us about the dangers facing our natural world. NOW STREAMING ON CBC GEM
Available on CBC Gem

It’s spring on the North Atlantic and millions of Atlantic Puffins are making their way home to breed. These glorious little clown-like birds are full of contradictions.  They spend eight months of the year living alone at sea, but they are extremely social w hen they return to land, living in jam-packed colonies.

More:
Hollywood to Witless Bay: The double life of the Puffin Man

"Is it time for a dose of the cutes, or what? Yes, my friends, it is." Read a review by John Doyle

On Gull Island, just south of St John’s, Newfoundland, it’s breeding season for over 300,000 pairs of North Atlantic puffins.  The birds get right down to business, using their shovel-like beaks and their big feet to dig new burrows to protect their single precious egg.

Welcome to the world of this amazing little bird! Puffin Patrol invites you to share in the intimate moments of puffin life.  Purpose-built burrow cameras witness every tender moment of life in the burrows, from incubation of the egg to hatching and the busy feeding schedule that follows.  By season’s end, the vulnerable puffling leaves home for the first time. How will it fare?

Scientists in Newfoundland, Maine and Wales are working to uncover the mysteries of this beloved bird. Where do they go in the winters? How do they survive?  Their navigational abilities have intrigued scientists for decades, but now with advanced geo-tagging technology, pieces of the puzzle are coming together. By studying their behaviour and migration routes, the scientists hope to capture the puffin’s full annual cycle. And by learning more about puffins, they hope to protect their populations and to find answers about our changing environment.

Scene from the film: Puffin populations in some areas are on the decline because of climate change. 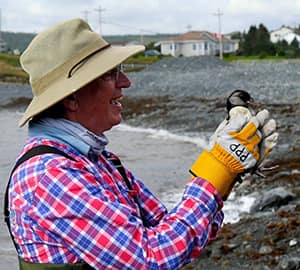 Climate change and light pollution are some of the biggest challenges that puffins face. Follow families and passionate environmentalists on Newfoundland’s Puffin Patrol. Every summer, residents of Witless Bay turn out nightly to rescue pufflings from the roadside and release them to safety the next morning.

From Newfoundland’s majestic shores, to the puffin islands dotting the Gulf of Maine, to the ancient ruins of beautiful Skomer Island in Wales, we invite you to join our team of experts and puffin lovers on the Puffin Patrol.