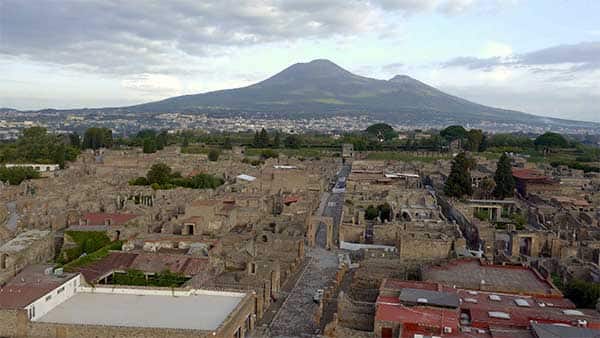 Buried under the ash of Mount Vesuvius in 79 AD, then forgotten for more than 1,500 years, ancient Pompeii’s new life began with its discovery in the 18th century. Since then, this vast city has been a subject of fascination for historians and archaeologists alike, a unique and fascinating window into Roman life, unlike anywhere else on earth.

The fascination has never been more vibrant than today. Blending incredible CGI imagery, dramatic reconstruction and stunning aerial photography, Pompeii's People is an unforgettable immersion in the ancient city of Pompeii and the lives of its people.

On his first visit to Pompeii 43 years ago on his honeymoon, David Suzuki was instantly fascinated. He wondered what life was like for its citizens before Mount Vesuvius erupted, almost 2,000 years ago. Now, he’s back for answers. And there’s no better time to seek them, because 21st-century technology is exposing the 1st century’s most personal secrets.  Archaeologists and historians are finally getting to the heart of Pompeians’ stories. David meets the world's leading experts, unveiling the most poignant and fascinating ruin on Earth like never before. 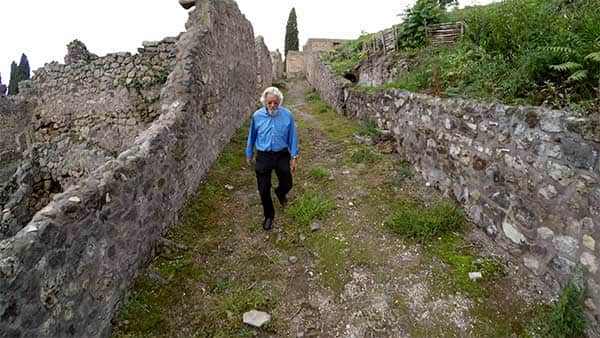 One of these experts is Professor Eric Poehler from the University of Massachusetts Amherst. He’s an advocate for the incorporation of non-invasive methods and innovative research technologies in modern archaeology. Eric has spent years studying tiny clues in the Pompeii’s streets, with his tablet computer as his main tool. He takes David on a cross-city journey, discovering a side of Pompeii that’s been hidden from experts for almost 2,000 years. The city even had a surprisingly sophisticated traffic system, with one-way streets everywhere!

It’s incredible to be able to actually picture the movements in Pompeii’s streets. But David wants to know even more about the people who called this ancient Roman city home, and even walk in their shoes.

Professor Steven Ellis (University of Cincinnati) introduces him to one of the rare Pompeians for whom they've actually been able to piece together a solid biography. His name is Umbricius Scaurus, and he was an entrepreneur in the trade of fish sauce (a popular Roman condiment — the ketchup up of its day!).  Through Ellis' excavation of a lower-class neighbourhood in the south side of town, he’s realised that the history of the fish sauce trade in Pompeii is much longer and more complex than he'd previously thought.

MORE:
What If Mount Vesuvius Erupted Today?
What Does A 2,000-Year-Old Roman Wine Taste Like?

As David roams through the 44 hectares of Pompeii that have been excavated, his picture of the city and its people becomes richer and richer, thanks to the findings of fascinating experts. Archaeologist Dr Llorenç Alapont is taking X-rays and high-resolution photos of the plaster casts of Pompeians to uncover any information he can about them.  With the particularly well-preserved cast of one young man, he’s even able to reconstruct his face.

Zooarchaeologist Professor Michael Mackinnon (University of Winnipeg) is discovering what Pompeians’ garbage says about what they ate. He’s also unraveling their fascinating relationships with their animals and livestock.

SCENE FROM THE FILM: David visits a brothel to learn about Roman attitudes towards sex.

David not only witnesses new discoveries unearthed by new technology, but he also becomes immersed in everyday Pompeian life. He learns about Pompeian women's makeup routines, as well as how citizens revelled in the whirlwind of animal fights, executions and gladiator combat that took place in the city’s most imposing structure: the amphitheatre.

David drinks a glass of typical Roman wine – the ancient beverage of choice – with Doctor Sophie Hay, an archaeologist who has spent three years excavating a typical corner bar in Pompeii.  She offers David a glimpse into Pompeii’s lively pub scene.

MORE:
New Things We Learned About Pompeii And Its People
Take a Walk Though Pompeii With Google Street View

The University of Western Ontario’s Dr. Kelly Olson has spent 20 years researching the bedrooms of the Romans. She takes David to visit the city’s famous brothel, the Lupanar, where David learns about the place of sex in Pompeian society. 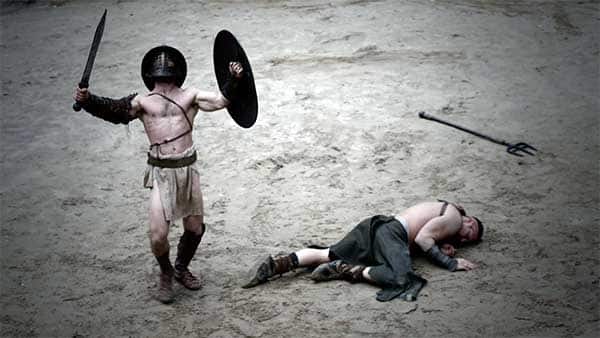 Gladiators were a big part of Pompeii's past

With every discovery and encounter comes the realization that these people from 2,000 years ago aren’t that different from our society today. And experts are racing against time to complete the full picture of the city. Exposed to the natural elements, Pompeii is crumbling. But its biggest threat of all is Mount Vesuvius, due for another “big one” of the scale of 79 AD’s eruption. This ancient city’s days are numbered. And technology is playing a key part in monitoring and preserving it as much as possible — before it’s too late.

LISTEN:
Pompeii, known for its Volcano, Loved for its Wild Sex Life

Both archaeology and science have unlocked the key to understanding Pompeii, a city frozen in time. As we see through this immersive documentary, the race to get a full picture of Pompeii, before it’s lost forever, has enabled it to be reborn.

Head of Finance
Nicola Minotti (CAN)

Director of Production
Alexandra Lane (CAN)

Director of Finance
Julie Lawlor (CAN)

Executive in Charge of Production
Sue Dando (CAN)


Produced with the participation of
Canadian Media Fund

With the assistance of