What kind of intelligence is behind dolphin communication, and will humans one day be able to have a conversation with them? NOW STREAMING ON CBC GEM
Available on CBC Gem

Dolphins have been a source of curiosity and have appeared in our stories and myths for thousands of years. We know they are intelligent animals, but just how intelligent are they, and how is dolphin intelligence expressed? 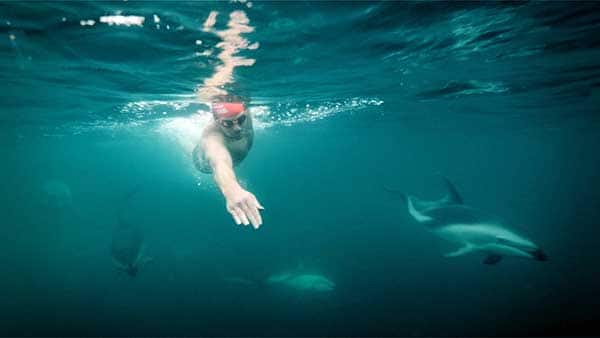 Adam Walker in the water with dolphins.

Adam Walker, and open ocean endurance swimmer set out on an eight-hour swim to cross the Cook Strait off the coast of New Zealand.  After several hours in the cold water, exhausted, he suddenly found himself surrounded by a group of dusky dolphins. Little did he know he was also being closely followed by a great white shark. The dolphins appeared to be protecting him from the predator, which left an indelible impression on Adam. What is the link between our two species? Why do we seem to be so interested and curious about each other? How far might this fascination between humans and dolphins bring us? Will we one day be able to communicate with one another?

Scientists around the world are asking themselves the same questions. Over the decades the focus on dolphin research has changed from asking “how intelligent are dolphins?” to “how are dolphins intelligent?”

The film brings us to the research sites of some of the most internationally renowned dolphin specialists, and alongside experts studying dolphins in the wild. Do dolphins think the way we do or are their brains wired in a very different way from ours?

Kelley Jaakkola, Director of Research at the Dolphin Research Center in Marathon Key, FL., Is testing dolphins understanding of “numerosity” – the ability to compare separate collections of geometric shapes and indicate which contains the lesser number. Not an easier task at high speed, and dolphins seem to be faster at it than we are!

Fabienne Delfour in Paris is a cognitive ethologist. She explains that dolphins, unlike most mammals, are self-aware. One of the tests indicating self-awareness in an animal is the mirror test, and Fabienne sets up a one-way mirror to observe the dolphins’ behavior. The dolphins’ reactions prove to us that they do not mistake the reflection in the mirror for that of another dolphin. They truly know they are seeing themselves. In humans this kind of self-recognition happens around the age of 2 or 3.

Stan Kucjaz of the Marine Mammal behavior and Cognition Lab, and Holly Eskelinen at Dolphins Plus have been studying the dolphins signature whistles: individual vocalizations that we can compare to human names. Dolphins emit signature whistles to call their young or to introduce themselves to other dolphins in the wild. Every signature whistle is different, and scientists are still working to understand what other information they may contain. 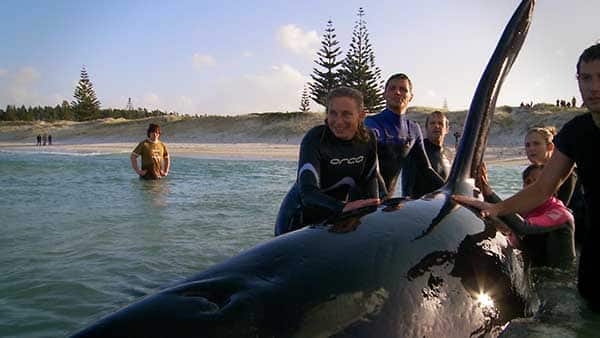 Researchers rescue a young orca whale (the largest species of dolphin) stranded on the beach.

Stan and Holly are also working to test the communication skills of dolphins. They insert a fish in tube and wait for the dolphins to figure out how to work together to open it. Once they have learned to do so, one of the two dolphins is paired with a dolphin who has never performed the task. It takes two to open the tube, and the first dolphin rapidly communicates to the newcomer how to open it. Just how are the dolphins communicating such detailed information to one another? There is much that is still unknown about dolphin communication but we know it is highly complex.

Off the Australian coast, Janet Mann, from Georgetown University, is studying the unusual tool use of the dolphins in Shark Bay. These “Spongers” pick up a sponge and use it to protect their beaks as they forage through the rough sediment of the ocean floor hunting for fish. The knowledge is confined to these dolphins in Shark Bay, and passed from mother to daughter.

Vic Peddemors, Professor of Marine Biology and Gail Addison, a naturalist take us on the Sardine Run near Kwazulu Natal, at the southern tip of South Africa. Thousands of dolphins from hundreds of kilometers away gather to hunt together in a dramatic, all you can eat buffet. The dolphins use their communication skills with one another to drive the hunt.

SCENE FROM THE FILM: Dolphins communicate to hunt together