Side by side: Sharon & Bram say goodbye to 40 years of enduring fans

"We see audiences of adults who grew up on us and who treasure those memories and want to revisit them, which is what this tour of course is about."

'We see audiences of adults who grew up on us and who treasure those memories and want to revisit them.'

Oh we ain't got a barrel of money.
Maybe we're ragged and funny.
But we'll travel along, singing a song.
Side by side.

The faces of Sharon Hampson, Lois Lilienstein and Bramwell "Bram" Morrison beam brightly at the audience as they sing together in a video projected onstage at the Rebecca Cohn Auditorium in Halifax on a recent Sunday afternoon.

Arms linked and feet kicking out to the beat, the original trio members of Sharon, Lois & Bram are immortalized in the decades-old recording that serves as introduction to many a show on Sharon & Bram's current farewell tour; a nod to Lois, who retired from the group in 2000, and died of cancer in 2015.

It's also a way for the three of them to be together onstage, one last time, before Sharon and Bram officially retire themselves later this year.

"We always watch it," says Bram, over the phone on a conference call with Sharon from their respective Toronto homes. "We always stand in the wings. And we don't wait for it to be over. We watch it. Because it's wonderful."

Sharon and Bram have been singing "Skinnamarinky dinky dink" for more than 40 years now, half of that time as Sharon, Lois & Bram. Now on one last cross-Canada tour, the two are revisiting their old songbook while still releasing new material: "The Hug Song" came out in February, "Talk About Peace" featuring Jim Cuddy was released in May, and an illustrated book is coming this fall.

With sold-out shows dotting the country and a fanbase that still knows every word and movement to its songs, the trio that began haphazardly in 1978 is going out strong.

"We thought that we'd make the [first] album, it would be good fun, people would like it," says Bram. "And we would continue on with our own solo careers."

"Which we did," counters Sharon.

"That ambition did not last very long," adds Bram.

Sharon and Bram came up in the '60s coffee-house scene in Toronto, an upbringing they credit for the folk spine of their wildly popular repertoire. Bram was also a school teacher in North York with the Toronto Board of Education for seven years, and spent five of those years as an "itinerant music teacher in special education."

"That was a real learning experience for me, about how to be with kids, and what kind of things they like, and how to present those things, and how to connect with them," he says.

Lois was the only one of them with formal music training: a pianist, she had a classical music degree from the University of Michigan.

It was Ontario's Mariposa in the Schools — a performing arts program that "put performers like ourselves into classrooms on a freelance basis to sing with children in schools," says Sharon — that brought them together. The program had been planning to record a collaborative album with its freelance singers, but that project had stalled. Sharon, Lois & Bram still wanted to make an album — so they went ahead anyway.

That album was 1978's One Elephant, Deux Éléphants, which they funded with their own money, plus money from friends and family who "thought they were giving us charity — and we paid them back very quickly, actually," assures Bram. The trio conceived of the album at the beginning of 1978; released it in September; paid everyone back by Christmas. The album went triple platinum, and secured Sharon, Lois & Bram's first Juno nomination.

"It never occurred to us, not once, to take an idea to a record company and say, 'OK, we've got this record in mind, would you finance it and distribute it?" says Bram. "Never thought of doing that at all. We knew, just in our guts, that we had to do this on our own. Because we knew that we knew more about children and family music than anybody in a suit at a record company."

We did it backwards: we made the record first. And while we were doing it, we learned how to sing together.— Bram Morrison

Bram does point out that, because of their less traditional trio narrative, they may have done things in a different order than usual.

"Usually what happens, the group gets together, and they practise in mom's garage, and then they go to somewhere slightly bigger," he says. "And after a couple of years, they decide, 'Hey, let's make a record.' But we did it backwards, we made the record first. And while we were doing it we learned how to sing together."

Sharon laughs, and points out that they were lucky all their voices naturally blended well together — though it took some work to find those harmonies.

"Sharon was the only one who had had any experience singing harmony," explains Bram. "I was certainly a solo. And Lois was, too. And so on the first record, you hear Sharon singing a lot of harmony."

But they figured it out. And the rest — increasingly large tours (eventually with symphony orchestras), six Juno nominations and three wins, a billing at the White House, a popular TV show featuring a particular elephant — is history. 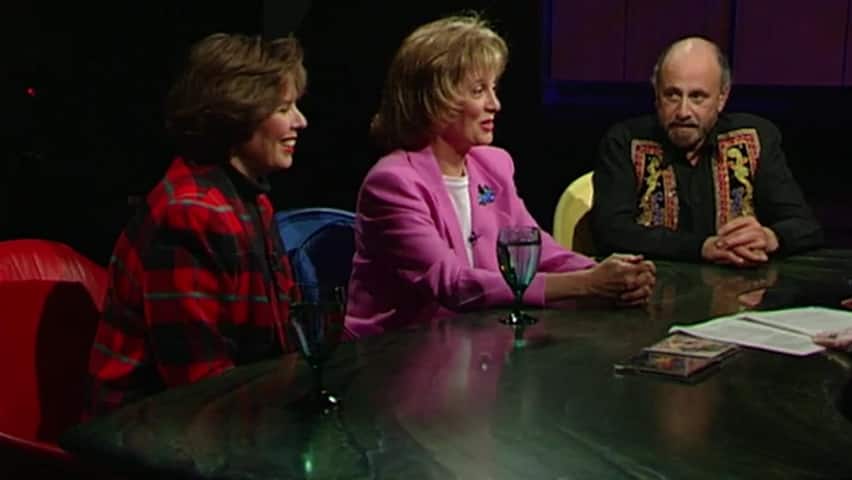 'We wanted to choose songs that we liked'

Ironically, Sharon and Bram credit their enduring success to never pandering to children.

"[Our shows] were called family events and not children's records and children's concerts," Bram continues. "We really wanted to appeal to the whole range of the family. And so our musicians were good, professional musicians. Our arrangers were very sophisticated. And we learned how to fit in with all that."

"We were intent on the standards being very high," adds Sharon. "We spent money to do that. We did not skimp, we did not take the cheapest way out. And I think that helped build our audience."

That audience has a retention rate going on 40 years. Even at these farewell shows — of which a second one was added in Halifax on the Sunday due to popularity — adults show up without children.

"We see audiences of adults who grew up on us and who treasure those memories and want to revisit them, which is what this tour of course is about," says Sharon.

Those memories are also coming up vividly for Sharon and Bram: their farewell tour is ending in one of the venues where the two of them started, at the Mariposa Folk Festival in Orillia, Ont., in July.

While Mariposa in the Schools is what brought Sharon, Lois & Bram together, the festival is where Sharon and Bram were each playing before they amassed the affection of most families in Canada ("You were also in the Mariposa Folk Festival and I have the poster to prove it," Bram jokes, when Sharon talks at length about his shows at the festival).

"Also later on in the process, Lois and I organized the children's area at the Mariposa Festival, which was probably the best ever," says Sharon. "So yes ... we're going back to Mariposa this summer. Kind of a nice, as Bram says, book end."

Catch Sharon & Bram during the remainder of their farewell tour. Get the dates via SharonandBram.com.