5 things we learned from Tegan and Sara's memoir

The twins dug deep into their high-school years to write their heartbreakingly honest coming-of-age story.

Often a complicated mix of painful and wondrous coming-of-age experiences, high school can be a raw time to revisit for most people. But for Tegan and Sara Quin's new memoir, High School (complete with companion album Hey, I'm Just Like You), the twins voluntarily dove deep into the layers that made up those three years — the ones that ended up kicking off their career.

Taking a rotating chapter each (handily marked "Tegan" or "Sara" with the grade at the top of every page for quick reference), the Calgary-raised twins went back over old photos, VHS tapes, journals, notes and high-school friends' accounts to write in heartbreakingly honest detail how they each came to terms with their sexuality, with each other and with the musicians' lives they ultimately wanted to lead.

Her identity as a queer person is different than mine because my origin story of figuring out my sexuality was easier.- Tegan, talking about Sara coming-of-age story

While Tegan and Sara, now  in their late 30s, thought they knew each other after nine full-length albums, a myriad of awards and, well, growing up together, they discovered they still had a lot to learn about each other's truths.

"I think there was an assumption on my part that my experience of high school, which had been a bit more fraught with insecurity, shame around my sexuality, I had a lot of hatred for my body in this way that I just assumed Tegan felt the same," Sara told CBC Music. "And I assumed, when we sat down to write the book, that she would be writing about those same things. And so when I received her part of the book and realized, wow, she had this whole other story that she was talking about and her experience of her body or her desire for girls and ultimately her first relationship with a girl really feels and looks different than mine did."

"It was really wonderful to read Sara's side of the book," said Tegan, "and to understand more of her interior world at that time … her coming to terms with her sexuality and her first couple relationships were really complex. And they were wonderful but they were also really hard. And so her identity as a queer person is different than mine because my origin story of figuring out my sexuality was easier."

Through High School, we get to see first-hand, and from vastly different perspectives, how the twins fought viciously and defended each other just as steadfastly (the book's cover photo, of the twins sitting back to back, feels like a nod to their disparate stories). How their relationships with their bodies, and each other, kept changing, and how important their friendships — platonic and not — played a role in who they are today. The book is an important addition to the coming-of-age collection, with voices and experiences we don't often get to hear.

And while there is a lot to take away from the 370-odd pages, below we've singled out five things we learned from Tegan and Sara's memoir — though we do recommend you read the full thing. 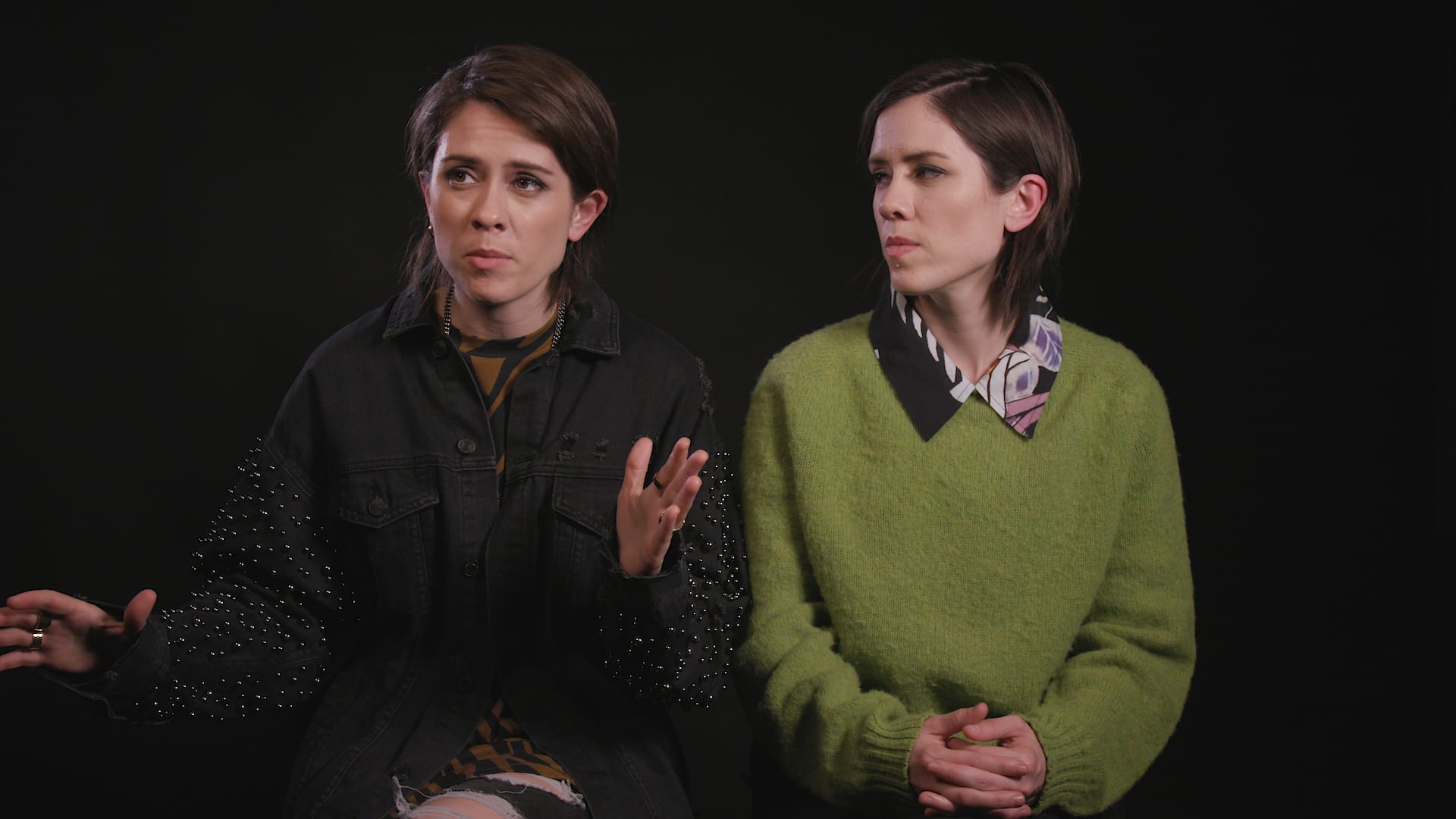 1. Their 1st guitar was an accident — and they secretly borrowed it for weeks

By Grade 10, Tegan and Sara had taken nearly a decade of piano lessons, but had never played the guitar. When they were rooting through the under-the-stairs storage space in their house and found their stepdad Bruce's Fender, they were immediately drawn to it and started to plunk away.

After an hour we carefully returned the guitar to its case and replaced it in the space under the stairs, checking and double-checking we'd left it exactly where we had found it. Neither Sara nor I mentioned finding the guitar to Mom or Bruce that night when they got home. I also didn't mention to Sara that when she went to Naomi's after school in the weeks that followed, I stole the guitar from under the stairs and played it secretly in my room…. What I didn't know was that Sara was doing the same thing when I wasn't around.

Their pull to the guitar was undeniable, and they each started writing songs immediately.

In a Grade 10 chapter titled "You Can't Say 'Fag,'" Tegan details how Bruce yelled at her to stop playing Nirvana in her room when she was blasting the song "Rape Me." After Tegan pointed out that it's an anti-rape song — "Kurt [Cobain] was showing support for women," she writes — and pushes to keep listening to the band, the two have an explosive fight where Bruce says, "And that guy was weird, he wears makeup … I mean he's a fag."

"It was like a punch to the gut," writes Tegan, and she goes on to recount the first time she heard the word "fag," in elementary school. The chapter is a heartbreaking, infuriating retelling of how much work the twins had to do to exist safely at such a young age. Tegan and Bruce have a defensive, angry discussion that turns tender and accepting — and ends with them listening to Nirvana's MTV Unplugged album together — but it's an early glimpse of how difficult the future would still be.

Sara's friend (and kind-of boyfriend) Matthew lent her the Smashing Pumpkins' Siamese Dream CD in Grade 10, singling out "Today" as the best song on the album. Sara and Tegan listened to it together at home later that day:

"Today is the greatest day I've ever known," Billy Corgan sang from the black foam of Bruce's speakers. Goosebumps spread across my ribs as the bass sucked air in and out of the subwoofer. Each lyric provoked a desperate reply in me. I couldn't wait for tomorrow either; I wanted to burn my eyes out, too; I wanted to turn someone on.

Sara's relationship with Matthew didn't last long — "Matthew was the first boy who shared something with me that I didn't want to reject, but I had nothing to offer him in return" — but her love of the Smashing Pumpkins was solidified. When her mom bought her Mellon Collie and the Infinite Sadness as a surprise, she coveted it:

Nothing had ever sounded more important to me. Billy's words spoke directly to the places inside of me that were hurt. His suffering reflected my own, and briefly, I felt less alone.

4. How the women in their family shaped them

In a Grade 11 chapter, Tegan details a few tough conversations she had with family while visiting an aunt and uncle in Atlanta with Sara, their mom and Bruce. One begins when the men run errands and stop for wings at Hooters, which devolves into multiple divisions along gendered and generational lines as to whether or not Hooters is an acceptable place to go. ("The food's nothing to write home about," says Gramma. "I don't see what the fuss is about," while Tegan answers, "The fuss is that the women have to dress in a certain way to sell the food.")

But the telling moment in the first half of that chapter is when most of the women in the room continue to question the men, and in response, the men leave. Tegan concludes:

Most arguments in our family ended this way, with the men fleeing, claiming the women were too emotional to have a rational conversation. But the older I got, the more I saw the men leaving as irrational, and the women's emotions as the only sensible reactions. From the women, I learned to speak up about the things that were important to me. To brandish my emotions with pride. My voice mattered.

5. They recorded their 1st album via their Grade 11 high-school broadcasting class

The twins' first band was called Plunk, for "light punk," and  Sara retells how their teacher, Mr. Kim, was "uncomfortable letting us girls handle the machines unchaperoned; we weren't afforded the same freedom for our projects as the boys." She adds that before his class, she hadn't had much desire to learn the ins and outs of recording. But "he inspired me to prove him wrong."

They eventually convinced Mr. Kim to let them record using the classroom, with Tegan saying, "Mr. Kim, you could be the one responsible for helping us make a Grammy Award-winning album." They've since gotten close.

The result was Plunk's first cassette, copied for all their friends at school with an album cover and track listing to "make it more legit."