Avocado art is officially a thing. Feast your eyes before you feast your face

The sexiest fruit just got sexier

The sexiest fruit just got sexier

Here's a topic to float during a lull at your next dinner party: the etymology of the word Avocado comes from "ahuácatl", the Aztec word for testicle. To be fair, on the tree they often grow in pairs, so avos may look a little like viridescent, pendulous scrotums. Kind of. Given its sex-organ similarity, the avocado was also considered to possess marked aphrodisiac qualities by ancestral peoples and was an Aztec symbol of both love and fertility. As it grew in popularity worldwide, the avocado had a brief life as an "alligator pear" given its colour, skin texture and pear bod. Note: I will now commit my life to bringing back that nomenclature.

Alligator pears (aka avocados if you're a purist) are the fruit (yup, not a veggie) with the highest protein content and fibre content on our marvelous space rock. They're also a wonderful delivery system for vitamins B6, C, E, potassium, magnesium, and folate, making them a produce powerhouse. Pyrodoxine, aka the aforementioned B6, boosts testosterone levels which lights a fire under our sex drives.

Forget chocolate covered strawberries. I'm with the Aztecs, so I'm just gonna say it - avocados are the sexiest fruit, no contest. Still not sold? Okay, hang on to your sun hat: avocado trees have sex. Fact. Because they don't self-pollinate they need another avocado tree nearby in order to grow. Equal parts sassy and adorable.

More recently, alligator pears have had another moment in the sun. And why shouldn't they? They're handy, beautiful, delicious and nutritious (also, they love sun). Still, one man has elevated their innate beauty to high art while solidifying a bit of trend. Daniele Barresi, has been carving fruit and veg up for the past 20 years. Those decades wielding a blade have made him a two-time world champion sculpting mind-melting floral and ornamental shapes into fruit, vegetables, cheese and the occasional bar of soap.

But it's his soft-fleshed avocado carving that caught the all seeing eye of Instagram (already deeply enamoured with #avocadoart). Barresi's ornate baroque-style carvings look like they were sculpted into creamy jade over a two week period but it only took him an hour to hand-carve the edible art (also trending) - ya, that avocado has zero brown oxidation on it.

Barresi didn't lead the charge with online avo adoration. Dressing up avocados has definitely been a social media mainstay for a while now. Here are the works of some other edible artists who favour the green fruit as a muse.

Avocado Yoda. Yodacado? Avocyoda? In any case, like it you will.

Little beardo in the avo

Munsch on this artsy avo repro of The Scream

Already pretty beautiful on their own without a makeover

Wanna join the #avocadoart insta trend yourself? Check out our video on how to make an easy avocado flower: 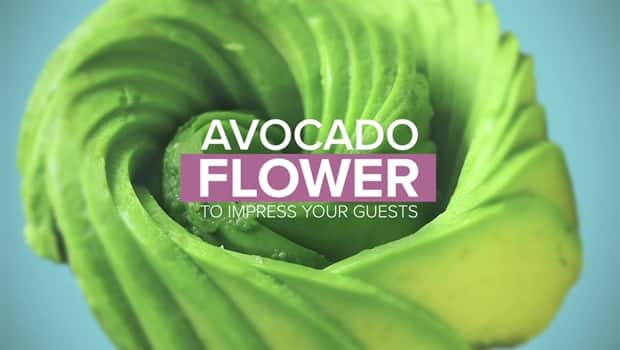 How to make an avocado flower

4 years ago
0:29
Impress even the harshest critics with this beautiful avocado flower. The secret is it’s even easier than it looks! 0:29

Coming back to Barresi, he is in an entirely different league. Behold his Baroque broccoli - not as yummy by some accounts but no less beautiful

And his flowery melon work

If you're hungry for a food sculpting tutorial, here's Barresi's internet how-to on melon sculpting, which you should know he manages to make look frustratingly easy

Still, there's something about Barresi's tender fleshed avocado - which is obviously only for the skilled hands of a master (I've botched the simple act of halving one)

For all their adoration, alligator pears (don't fight it) aren't free of scandal. Though celebrated, they've caused a few trips to the ER - do mind that knife when carving up the squishy fruit. Also, millennials have recently been trolled by a rich white dude telling them they could've financed a house with all the cash they've spent on avocado toast. The internet released a collective thumbs down on the thin theory. The final conclusion is that the claim is trumped up and inhaling avo toast a couple times a week will not break the bank any more than putting the deferred costs under your mattress will give you enough scratch to buy real estate - not this century at any rate. So crack open an avo and treat yo'self but leave the more delicate knife work to the masters.

Disclaimer: levels of arousal during post-avocado consumption may vary. If you do end up feeling sexier as a result, it may be all the nutrients making you look good. Tip of the brain to food science and solid honorable mention to the Aztecs who got it right well before Instagram upped the sexy.