Back in Time for Winter

How did Canadians survive the winter before the snowblower? 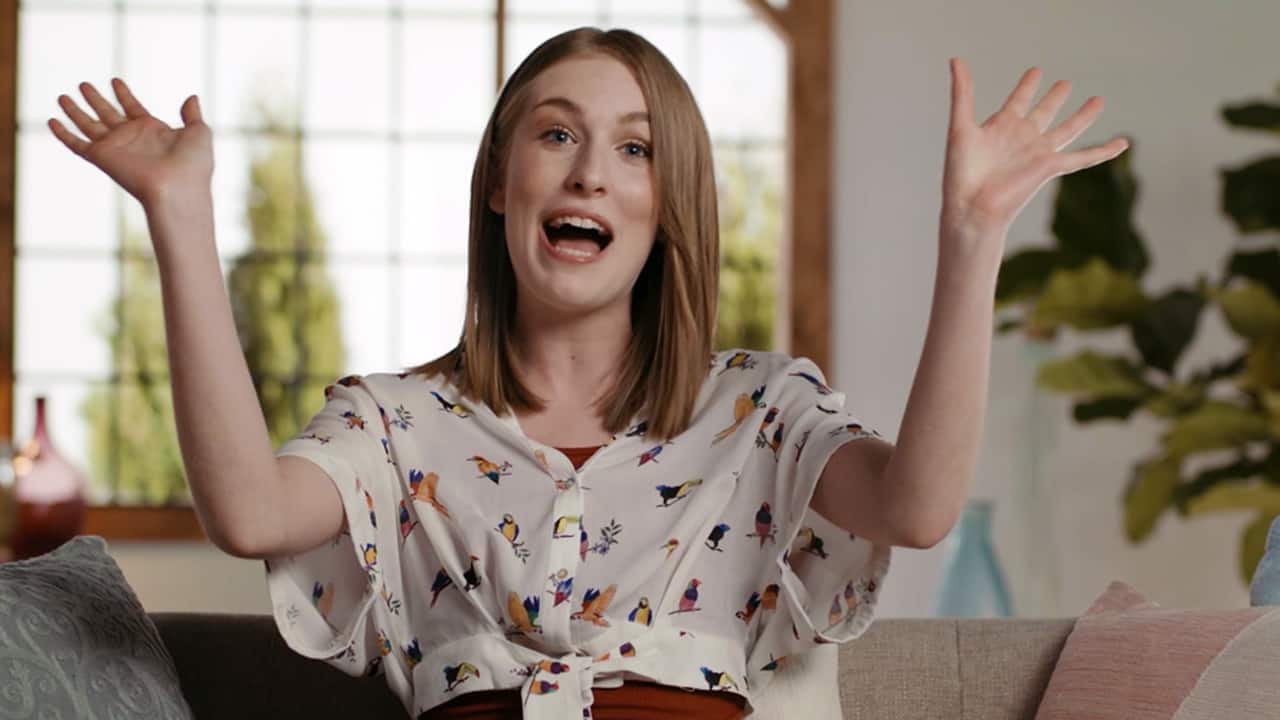 11 months agoVideo
4:45
The Carlsons reflect on their time-traveling adventure. 4:45

Making it through just one Canadian winter is hard enough. The Carlson family of Sudbury, Ont. just had to endure six decades worth. Sort of.

When this family of five — dad Dave, mom Melanie, and daughters Lauren, Alex, and Chelsey —  joined CBC's Back in Time for Dinner, they agreed to shed their modern conveniences and immerse themselves in Canadian winter history. Every week, they would live in a different decade, starting in the 1940s and ending in the '90s. Every element of their lives was transformed according to the decade's norms: their living spaces, the food they ate, their gender roles, and the clothes they wore. Back in Time for Winter brings Back in Time for Dinner to Canada's most challenging season.

The Carlsons sat down to discuss their favourite decade, embracing the winter weather, and what it was like to live life without modern conveniences like smartphones and the Internet.

The 1980s struck a chord for middle sister Alex.

"The food we ate was much more familiar to me, and tasted much better than most of the previous decades' food," she said.

She also welcomed the introduction of some helpful technology, which she described as "enough of it around the house for it to be useful, but not to the point where it controlled how we were living."

Dave, who was a teenager in the 1990s, enjoyed watching his children experience his youth. But while he was excited for the familiar music and television —and the opportunity to dress like Jerry Seinfeld — he also loved the family activities.

"We got to experience some great activities together in the '90s: the family tubing, power outage, Pictionary, driveway hockey, and I loved that Lauren and I got to drive the family station wagon."

It was also a decade where he got to spend a lot of time in the kitchen, cooking, much like he does in modern life.

While mom Melanie loved reliving '90s fashion, both she and her oldest daughter Lauren loved the fun colour of the '60s. Melanie's favourite outfit?

"The cream lace dress with the tall boots. I'd wear a modern version of that nowadays."

"If I had to choose [a decade], I'd pick the '60s because I got the best of both worlds. I wore some pieces that were very wild and out there, and pieces that I'd wear on a typical modern day," said Lauren, but her favourite outfit? "The '50s funky plaid pants outfit all the way. It was the first time I wore pants after a literal decade of dresses and skirts. It was great."

With the family home transformed for each decade, the Carlsons got to inhabit the spaces and design touches that were common to Canadian homes of the past.

"I really liked the natural wood tones and shelves of the '60s kitchen, the dining room round table and shelves, and the incorporation of more art/knick-knacks and plants," said Melanie. "The '40s living area was classy and timeless with a traditional feel that is still beautiful in present day."

"I loved the shelving on the wall and the circular table was a nice touch. But I also loved the '50s kitchen, the pink peninsula was super cute." 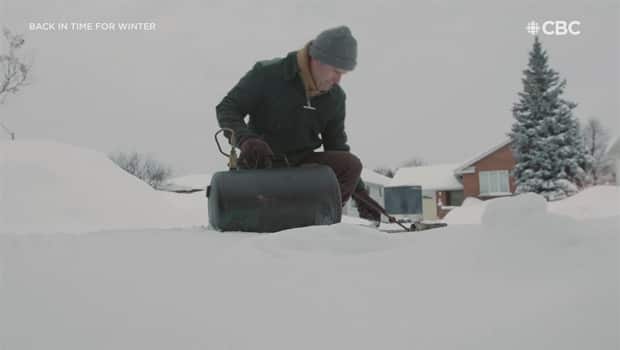 11 months agoVideo
0:48
Carlson family dad Dave talks about trying 60 years worth of snow clearing technology on Back in Time for Winter. 0:48

From skiing to tobogganing, the family left few winter activities unexplored. Dave was thrilled to get back to downhill skiing after a long hiatus. The '80s snowsuits were also a fun touch. "The outfits were so iconically '80s that I couldn't help but feel like I was truly back in time. Not only was the skiing riveting, but we also got to enjoy the beauty of winter being up on the hill enjoying the views."

"I especially loved trying the crazy carpet and GT Racer," she says. "Although, every new winter activity I tried was an unbelievable experience. I'm excited to do them again."

Dave's least favourite winter activity was almost certainly clearing snow from the family's driveway. But while it wasn't exactly fun, it did leave him with some good insights on which methods work best.

"I had so much hope that the flame thrower and the leaf blower would work to clear off the driveway," he says. "Sadly those were such a fail. But I guess if they worked we'd be all using those methods today. My favourite method was the good old shovel."

What was the worst thing you had to eat?

Almost universally, the Carlson's were not fans of the experiment's fish-related meals.

"I really did not enjoy the sardine sandwiches," says Dave. "I love fish, but with the skin removed. Having a full fish inside my sandwich is nasty."

"Most horrifying food I prepared to cook— the shrimp," adds Melanie. "That grossed and creeped me right out! I was not a fan of any of the seafood we had to try beyond white fish. Not a sea-foodie."

"The entire seafood meal was horrifying."

"The banana ham hollandaise was too gross for me," says Alex. "I couldn't even bring myself to try it."

They say the beef heart wasn't as bad as some of the other things they ate, but there's no rush to try it again.

Eating beef heart was definitely a once-in-a-lifetime experience and we're gonna keep it that way," says Dave. "It certainly turned out way better than expected but I think Mel adding all the extra lard helped a lot. Fortunately the places where I buy meat don't sell beef heart so I'll never be tempted by nostalgic impulse." 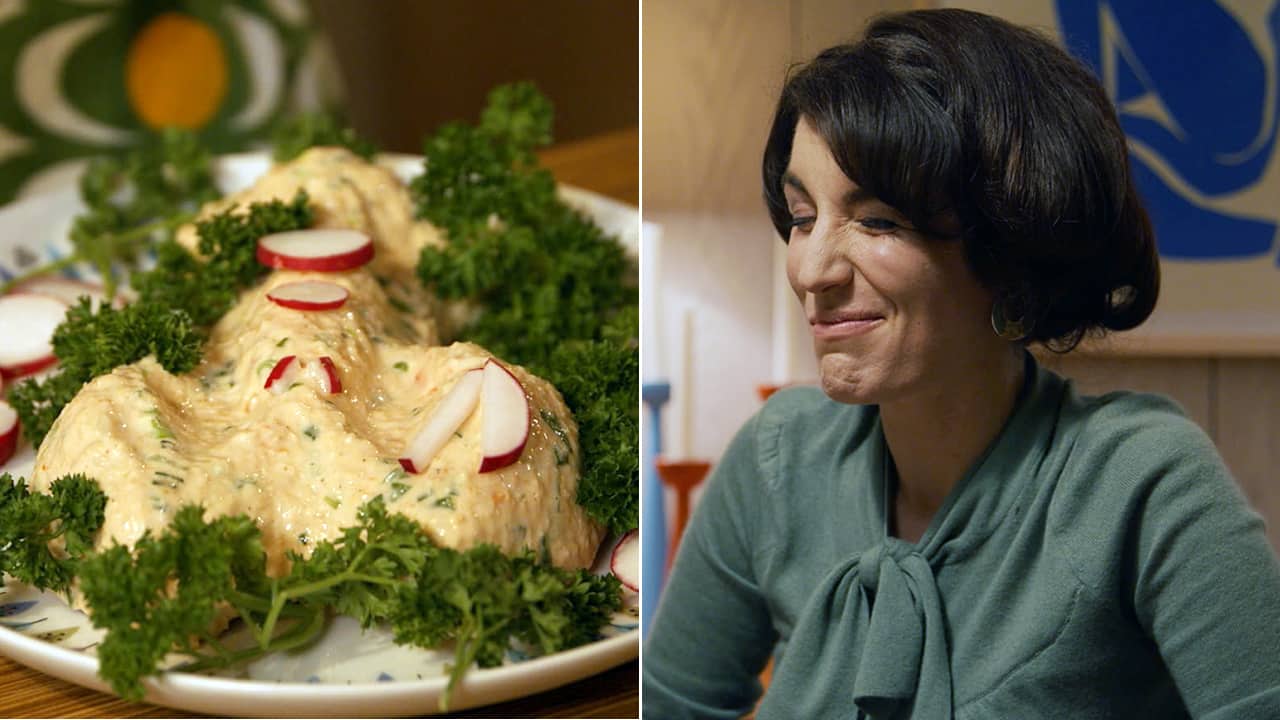 11 months agoVideo
1:49
One of the Carlsons' most memorable retro meals featured a moulded salad that was supposed to look like a lobster, but came out looking like something else. 1:49

Did this change how you feel about winter?

One of the things the Carlsons say they will take away from the experiment is changed attitude toward winter. For Dave, being on the show helped rekindle a love of the season.

"I grew up loving winter," he says. "We lived on a lake so growing up in the winter meant a homemade skating rink, hockey all winter, sliding. As an adult, winter has meant shovelling driveways, winter driving and enduring the miserable cold. This experience made me fall in love with winter again. It got me out ice-fishing, snow-machining, downhill skiing. I saw how fun it can be."

Lauren isn't quite as sold on winter as her dad, admits that she does like it better after having lived through six decades of it.

"For me, winter has always been a season that I simply have to endure," she says. "Since this experience, winter has become a season to embrace and appreciate in its fullness. It's not so bad, you know?"

Most surprising aspect of any decade?

It's not shocking that living through six decades of history would have a few surprises. For Lauren, it was the austerity of wartime that caught her off guard.

"The biggest surprise was how simple the '40s were," she said. "It felt like a whole other world."

For Dave, the big surprise was something both smaller, and tougher on the ego.

"I was so excited to play hockey with the guys and felt like it would be my time to shine," he says. The skates fit like a glove and were super comfy. I thought I was in for a great day of hockey until I hit the ice and suddenly realized the skates would be my undoing. The old skates offered no support."

Melanie, on the other hand, mostly enjoyed the surprises she was dealt.

"The sauna in the driveway was a nice surprise in the '60s. Getting a surprise visit from Liz Manley was an over-the-top treat, too."

How Back In Time changed their perspectives

While the Carlsons are happy to leave ham banana hollandaise and floppy hockey skates in the past, there are some things they are happy to bring back with them to the 21st Century. Mostly having to do with their use of technology.

"I really appreciated the 'forced' break from smart phones and computers," says Melanie. "Technology has become so pervasive; it is good to rest the mind from constant stimulation."

"I have two big takeaways," adds Dave. "One is how fun winter can be if you make an effort, bundle up and go out and enjoy the many winter activities. They truly are so fun! Secondly, what makes me happiest is spending time with my family. It doesn't matter what we're doing. We removed the distraction of cell phones, spent time together and it was so wonderful."