How did these Ontario kids get their hands on the Stanley Cup? Well, it’s actually a popcorn maker. But it served as the ultimate prize for Garnet Yerema, left, and his brother Keagan’s version of the NHL playoffs. (Sheryl Bunting)

Who needs the NHL? These kids recreated the playoffs in their basement

The hardest part of recreating the Stanley Cup playoffs in your basement? Probably trying not to laugh.

Keagan Yerema, 11, and his eight-year-old brother, Garnet, spent the last month or so filming a YouTube series called Hockey Night in Our Basement with their mom and dad.

The idea was to complete a version of the NHL season — including games, interviews with players and expert commentary — after the real season was postponed to stop the spread of the coronavirus.

But when you’re trying to interview your brother and he’s wearing a fake Auston Matthews moustache, it’s really hard to keep a straight face.

“I just held it,” said Garnet from his home in Sunderland, Ont., northeast of Toronto, when asked how in the world he managed to keep his game face on. ‘Now you can keep your playoff beard growing,’ said Garnet to his brother, Keagan, who was dressed like Maple Leaf captain Auston Matthews, when Toronto won on the fifth night. (Sheryl Bunting/YouTube)

Every night, the boys joined up with one of their parents to form a team. Then they flipped a coin to see who got what jersey.

In real life, Garnet’s a Leafs fan and Keagan cheers for the Montreal Canadiens, so what did they do to make sure nobody lost a game on purpose?

Garnet said they made a family pact “that we always try our best” no matter what team they were playing for. 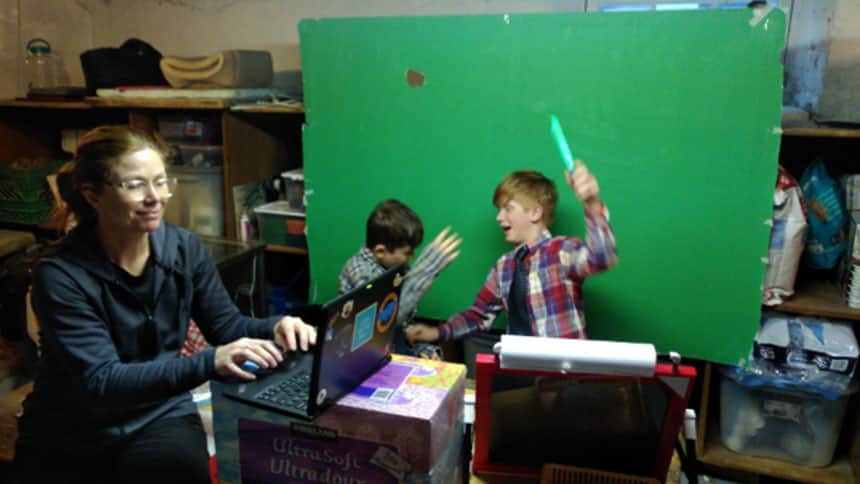 The family filmed their off-ice commentary in front of a green screen so that they could use an editing program on the computer to change the background of each shot. (Richard Yerema)

After weeks of nightly games, Calgary and Toronto were the last two teams standing.

Watch Keagan and Garnet get the viewers pumped up for Game 4 of their pretend Stanley Cup Finals.

While the off-ice commentary was fun (“I just think it up as I go,” Keagan said), there were some unforgettable plays on the basement floor, too.

One time “I was running up the concrete and dad wasn’t ready,” Keagan said. “I shot it and it went through his five hole!”

If you don’t know what a five hole is, it’s the nickname for the space between a goaltender’s legs. One of Keagan’s jokes in the series was to pretend that Leafs player William Nylander was obsessed with winning the cup, like Gollum in The Lord of the Rings. (Sheryl Bunting/YouTube)

Then there was that time the family cat, named Tuna, wanted in on the action.

“We were in the middle of filming and he just jumped up on the table and meows,” Keagan said. “That gave me a laugh.”

Who won the cup?

The last playoff game was pretty tense, with lots of good saves by Garnet on behalf of Toronto.

Check out some of his best moves in net:

In the end, even Garnet’s goaltending wasn’t enough to win the Stanley Cup.

Calgary beat Toronto in Game 5 with a score of 5-4. 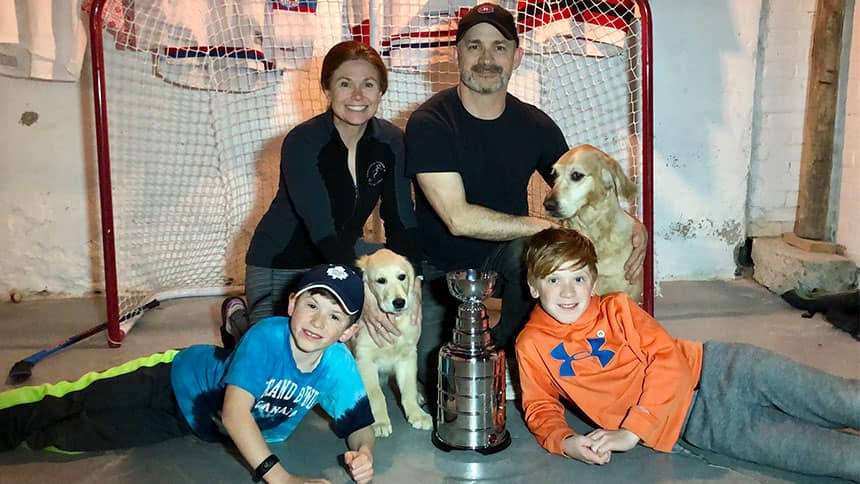 Parents Sheryl Bunting and Richard Yerema helped Garnet and Keagan with the video project. Thankfully the whole family is into hockey. Even their new puppy Opal and dog Tiggy got involved. (Sheryl Bunting)

“I don’t care about losing,” said Garnet in his post-game interview. “I just enjoyed playing.”

Maybe a little too much.

Putting the kid in ‘Sid the Kid’