WATCH — Will these Calgary kids win big for Canada in Silicon Valley?

UPDATE: Canada's Team Robot Unicorns tied for third place alongside Nigeria, Bolivia and the U.S. at the 2019 Technovation World Pitch. India came in first place and Cambodia came in second.

Imagine developing a mobile app for kids and then presenting it on the world stage at a competition in the tech capital of the U.S., Silicon Valley in California.

Together, the four 11-year-old girls who make up Team Robot Unicorns, won the Technovation junior regional competition in Calgary on May 6, 2019.

This week, they’re in California at the Technovation world finals, presenting their project and hoping to take home the top prize.

“When we were told we were going to Silicon Valley for the world pitch, it was like an explosion went off,” Claire said.

“I was standing there like, really? Really? Then when I actually realized, I started screaming … I was like oh my God, we're going to California!”

Robot Unicorns is the only team from Canada invited to compete in Technovation’s World Pitch.

It all started when Tito decided to form a group and enter the local Technovation competition, the world’s biggest tech competition for girls.

The program aims to inspire girls to change the world through technology, according to the University of Calgary Faculty of Science website.

Every year, Technovation challenges girls between the ages of 10 and 18 to build a mobile app to address a community issue. 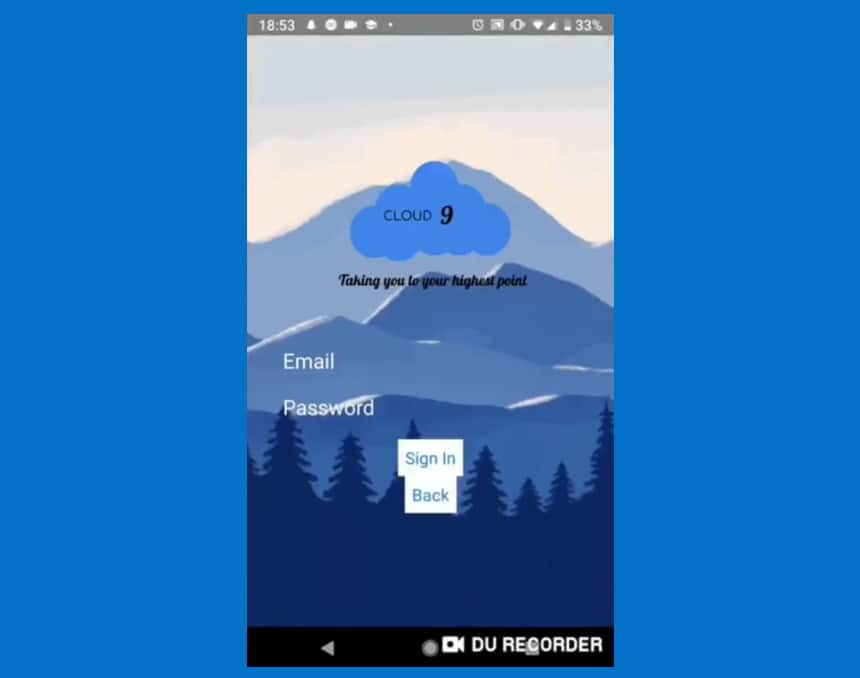 The girls from Robot Unicorns chose to develop an app that deals with social anxiety because it's something they've experienced first-hand. (Robot Unicorns)

“We were looking up problems specifically to do with children and young women and one of the biggest ones that popped up was social anxiety in children so we decided to do that,” Claire told CBC Kids News from her home in Calgary before leaving for California.

“We’ve seen how social anxiety can affect people straight on so we realized it would be the kind of thing people would feel connected to,” Tito said.

Once you log in, you are greeted by a golden retriever named Charlie. 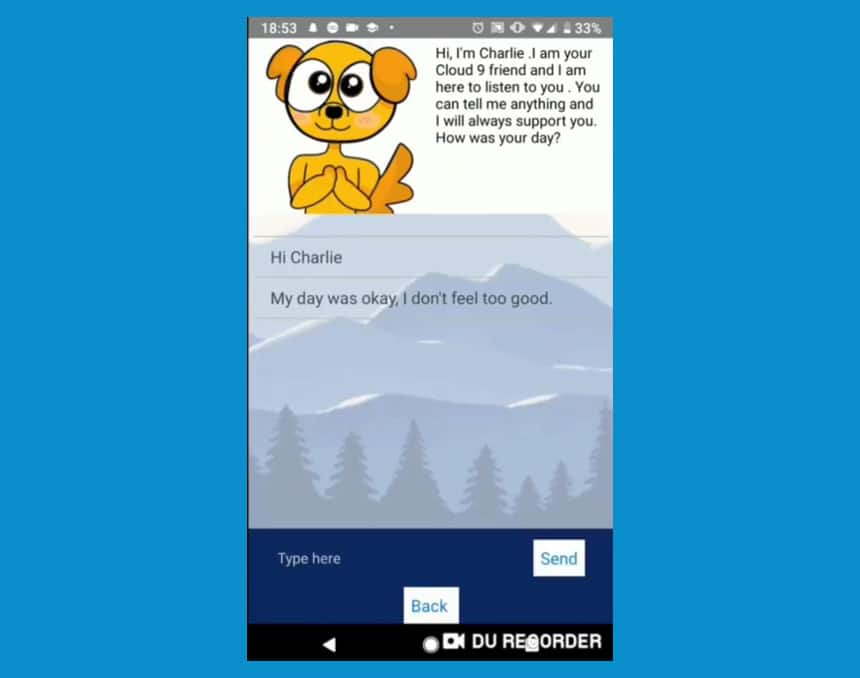 Stage 1 of Cloud9, hosted by a golden retriever named Charlie, gives users an opportunity to share their feelings. (Robot Unicorns)

“In the first stage, you journal whatever you want to say to this little character,” Claire said.

“We found that journaling is not only good for people with social anxiety and depression, but also enjoyable for people because they can say whatever they need to get it off their mind,” Tito said.

Next, a therapist appears with a series of questions to help with your anxiety. 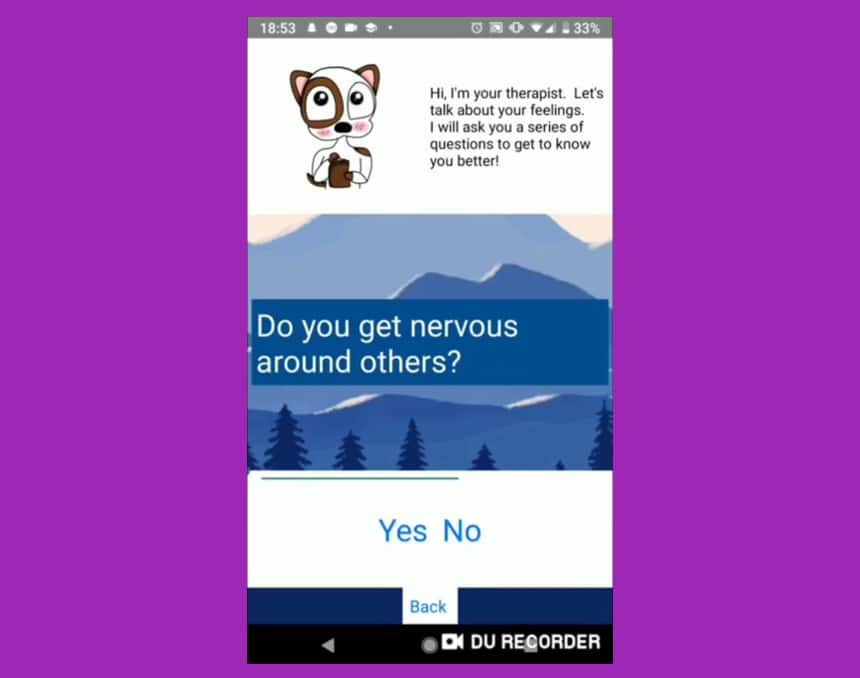 In stage 2 of Cloud9, a therapist asks users a series of questions about their anxiety, then offers advice and goals based on their answers. (Robot Unicorns)

“You can take the quiz and sometimes if your anxiety is really high, it will suggest that you see a doctor or tell your parents about it. But if it’s really low, it will give you small goals, like make a new friend in class or say hi to someone new,” Tito said.

The final stage of Cloud9 is a resource hub that offers links, articles and stories from kids who have experienced social anxiety. Stage 3 of Cloud9 is a resource hub that offers suggestions and assistance for social anxiety. (Robot Unicorns

“In Grade 4 and 5, I had very minor social anxiety,” said Claire.

“I just felt like I wasn’t good enough to any of my friends. I think an app like this would have helped me back then.” Claire, left, and Sarah present their Cloud9 pitch on stage at the Technovation competition in Calgary. (Submitted by Colleen De Neve)

At the recent Calgary junior regional finals, the girls were confident and uncertain at the same time.

“We were the underdogs, so we didn’t think we were going to get very far,” Claire said

“I remember that feeling when one of the teams that we thought [was] our biggest competition got third place,” Tito said. Tito, left, and Emma pitch Cloud9 on stage at the Technovation competition in Calgary. (Submitted by Colleen De Neve)

“We were like, either we didn’t place or we got first place and then they said our name and we like freaked out and ran to the stage. We all started screaming.” 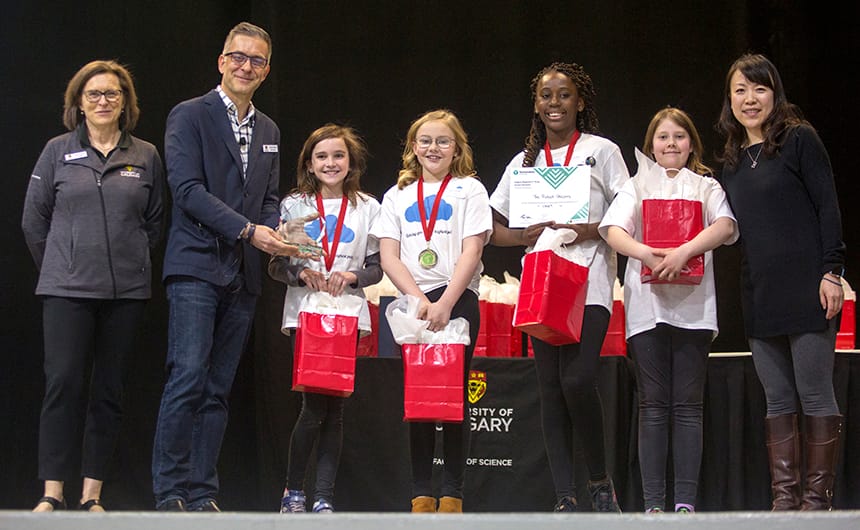 Emma, Claire, Tito and Sarah accept their award from faculty at the University of Calgary on May 6, 2019. (Submitted by Colleen De Neve)

Robot Unicorns are in the top six out of 150 teams from around the world participating in the international competition.

In Silicon Valley, they are competing against teams from Nigeria, Cambodia, India, Bolivia and the U.S.

“We are thinking in the first year, there is a certain amount of money we are going to need, so we’re trying to figure out how we can find the funding and people to sponsor us.”

Kids Help Phone is one sponsor that has already offered to promote Cloud9 on its social media platforms.

“We are excited to introduce it to the world!” Claire said.