WATCH — Why do some people want to ‘defund’ the police?

Calls to cut money for the police and spend it elsewhere

You may have heard the rumours that Lego was pulling police-themed sets off store shelves.

What is true is that Lego made the decision to stop advertising for those sets following the death of an unarmed Black man named George Floyd, after a Minneapolis police officer kneeled on his neck.

The idea of police officers as heroic, trustworthy and fair is being challenged everywhere.

In fact, some people are calling on the politicians who run our cities to “defund the police.” 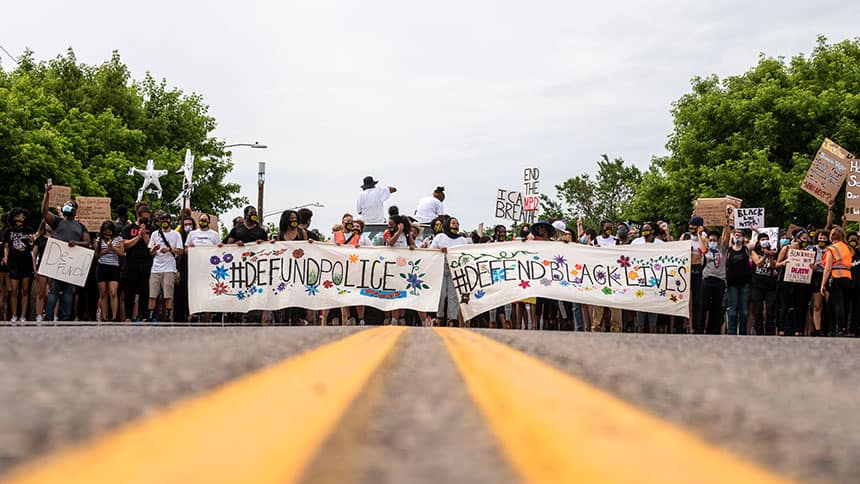 In Minneapolis, the city where Floyd died, a majority of city councillors said they support disbanding the city's police department and replacing it with something new. (Stephen Maturen/Getty Images)

What does defund mean?

The word can mean different things to different people.

Some people want to abolish policing as we know it and replace it with another system entirely.

Others want police forces in certain cities to be dismantled and rebuilt from scratch.

For Akwasi Owusu-Bempah, a sociology professor at the University of Toronto, defunding involves taking certain jobs away from the police and giving them to people who are “better equipped to do them.” 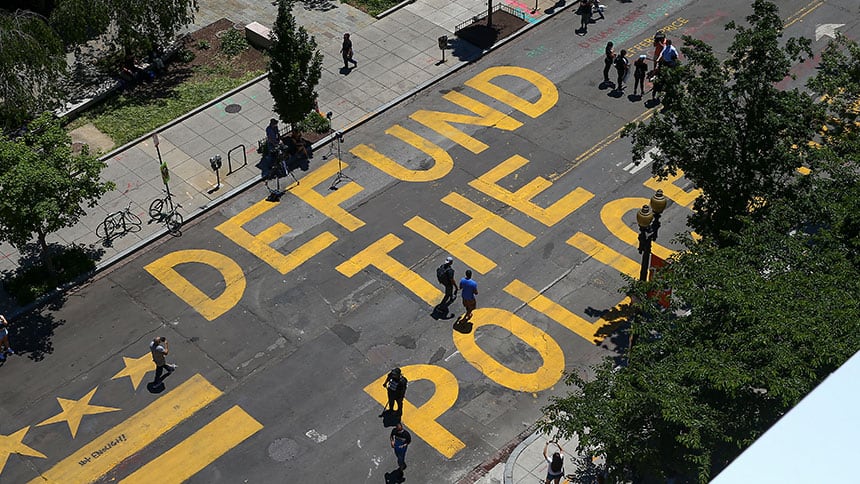 This street near the White House in Washington, D.C., was painted following orders from the city’s mayor on June 8. (Tasos Katopodis/Getty Images)

The police are often called to deal with issues relating to poverty, homelessness, addictions or mental health, Owusu-Bempah said, when a nurse or social worker might be a better fit.

He said the money saved by taking those jobs away from the police should be reinvested in those other areas.

Why is this necessary?

Black and Indigenous people are overrepresented in the criminal justice system, Owusu-Bempah said, meaning they’re more likely than white people to be arrested, charged and sent to jail.

That’s partly because stereotyping and other forms of racism can influence police work, he said. 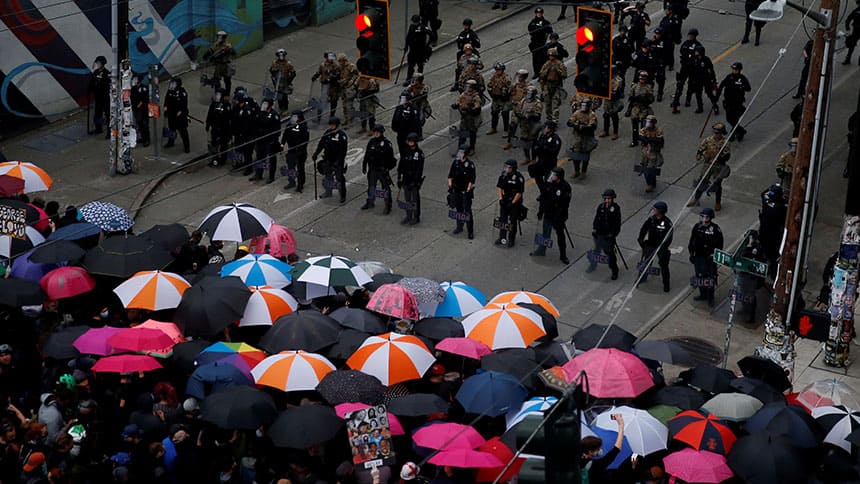 Protesters and police have been clashing in U.S. streets following Floyd’s death in May. Here’s what the scene looked like in Seattle on June 3. (Lindsey Wasson/Reuters)

The more we have police out of our lives when it isn’t totally necessary, Owusu-Bempah said, the less likely they are to engage in “discriminatory forms of behaviour.”

This is important, he said, because police are trained to use force.

This means that when the police are called, there’s a chance that somebody will get hurt.

“If we don’t learn from this, we are in so much trouble.” - Michael Elliott, president of the Edmonton Police Association

Michael Elliott, president of the Edmonton Police Association, said his concern with defunding is that “good programs will get cut,” including those that protect kids.

He talked about the Child at Risk Response Team (CARRT) and the Zebra Child Protection Centre, which allow Edmonton police to partner with other professionals in order to investigate child abuse. 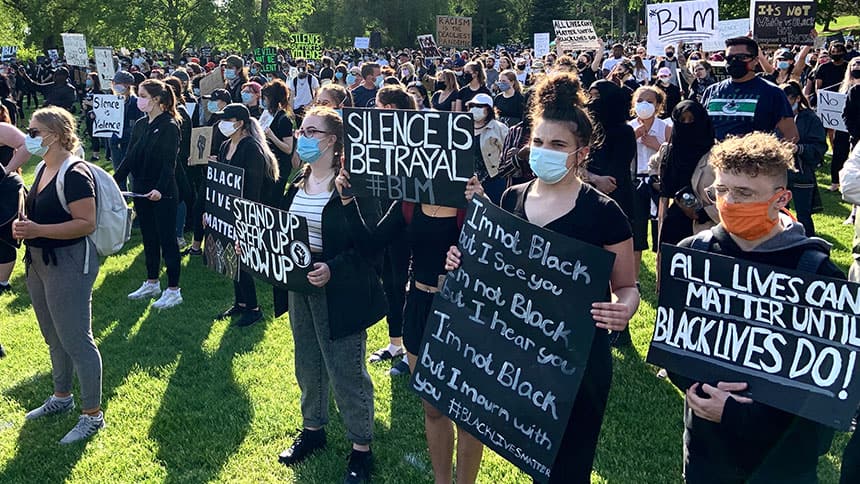 Thousands of people have taken part in protests in Edmonton to protest racism in policing. (Trevor Wilson/CBC)

Elliott said it’s important to remember that while social workers and others are qualified to handle certain calls, they will often request police backup if they aren’t sure a situation is safe.

“We don't want the mental health workers to get hurt, either,” he said. “They need to be protected.”

If not defunding, then what?

Elliott said there are a few things officers can do to improve their relationship with people of colour, including increasing the number of cameras on police uniforms and in police cars.

He said he’s also in favour of holding meetings with community members to talk about racism. 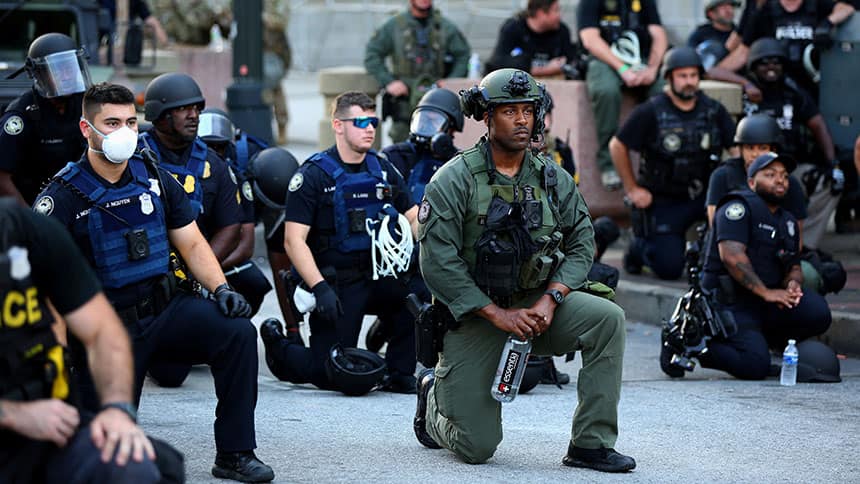 In some cases, including this moment in Atlanta on June 1, police officers have been kneeling to show their support for the ongoing protests against anti-Black racism. (Dustin Chambers/Reuters)

Either way, Elliott agreed with Owusu-Bempah that something has to change.

Floyd’s death is going to be “a catalyst for massive change,” Elliott said. “If we don’t learn from this, we are in so much trouble.”