WATCH — Rosa the rhino is a mom! Find out why her baby is so important

Fewer than 80 Sumatran rhinos are left in the world

On March 24, a Sumatran rhino named Rosa delivered new hope for her species when she gave birth to a female calf in Way Kambas National Park, Indonesia.

This is great news for Sumatran rhinos.

They are one of the most threatened rhino species in the world, according to the International Rhino Foundation.

Poaching has caused their numbers to decline by 70 per cent over the last 20 years according to the International Union for Conservation of Nature Red List.

The International Union for Conservation of Nature (IUCN) is an organization that tracks endangered species around the world.

In the rhino’s case, their horns are coveted for use in traditional medicines, according to reports from the World Wildlife Federation. Why is this a big deal?

Rosa is one of fewer than 80 surviving Sumatran rhinos now living in Indonesia, according to the IUCN.

Her baby was born at the Sumatran Rhino Sanctuary, where conservationists are helping the species survive by protecting them from poachers and breeding them in captivity.

Since Sumatran rhinos only give birth to one calf every three to five years, it’s a slow process.

This rare birth is being celebrated by rhino conservationists.

On their website, the head of the charitable foundation Save the Rhino, Cathy Dean, said, “Rhino pregnancies aren’t easy, so it’s wonderful to be able to celebrate this birth and know that there’s one more Sumatran rhino in the world.” 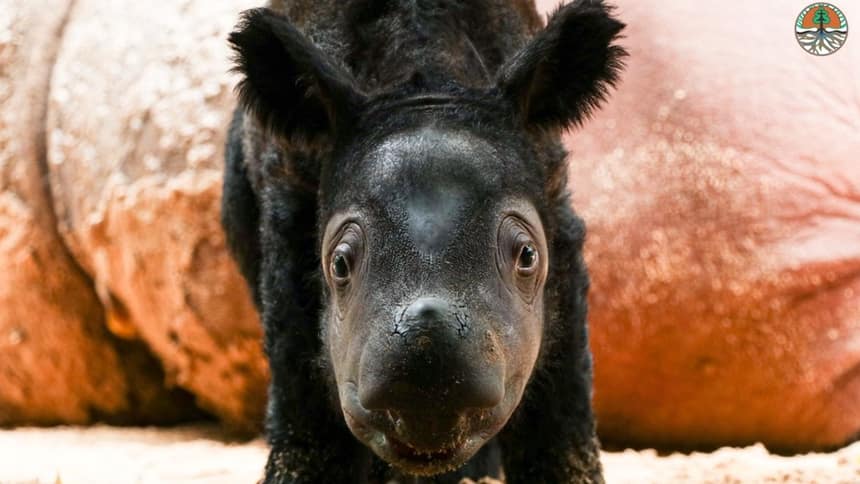 A picture of the yet-unnamed calf enjoying her surroundings. (Image credit:  Biro Humas KLHK/Indonesian Ministry of Environment and Forestry)

Sumatran rhinos are the smallest and the furriest of the species.

The baby calves have thick, shaggy fur and the adults have a thin bristly coat.

They communicate using a series of whistles and whines and enjoy wallowing in mud holes.

In the wild, Sumatran rhinos can survive for 40 years.

A pregnancy lasts for 15 to 16 months and females only have one calf at a time.

“The fact that we are so excited about the birth of one rhino highlights that these wonderful animals still teeter on the edge of extinction,” said Dean. “This brings hope for the Sumatran rhino’s future.”