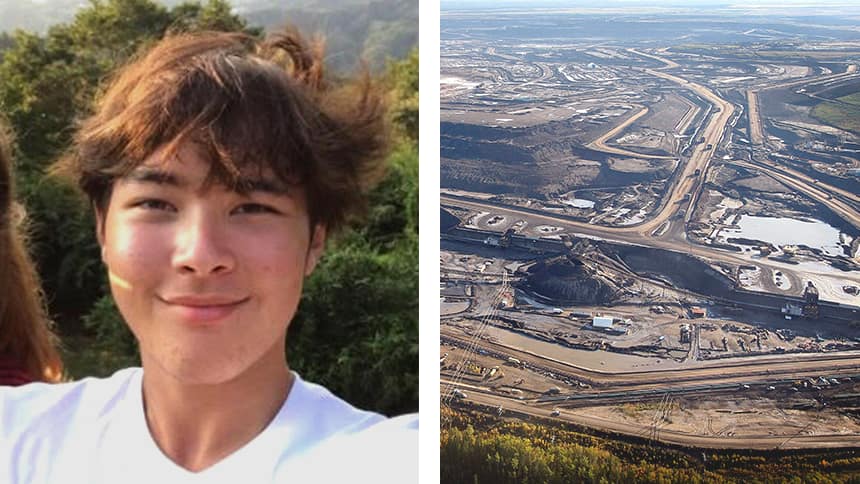 Akira Ourique, 17, is one of about 200 youths expected to participate in a hunger strike starting on Sunday in Ottawa against a proposed oilsands mining project. (Submitted by Akira Ourique, Jeff McIntosh/AP Photo/The Canadian Press)

Teens across Canada are organizing a hunger strike. Here’s why

About 200 youths from across Canada have pledged to go on a hunger strike.

Starting this Sunday they plan to go hungry to protest a proposed oilsands mine in Alberta — unless the Canadian government puts a stop to the project.

No, we’re not talking about the Trans Mountain pipeline.

“The mine will do horrific damage to our environment.” - Akira Ourique, teen activist

If Prime Minister Justin Trudeau approves it, the project in northeast Alberta would be one of the province’s largest oilsands mines to date.

The Trudeau government is expected to make a decision on whether to go ahead with the project by the end of February.

Before that happens, young people from across Canada are hoping to get the message out that they think the project is a bad idea. 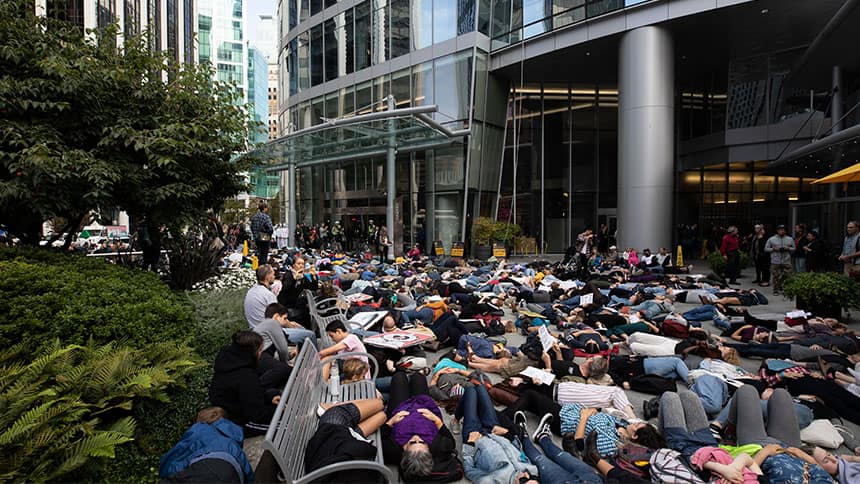 On Sunday, Feb. 23, at least 100 youths are expected to arrive in Ottawa for the first day of the hunger strike.

Others from various parts of the country have also said they will participate in solidarity with those involved, but won’t be making the trip to Ottawa.

The protesters consist of high school and university students as well as Indigenous youth.

Participants say they will hold a press conference on Monday as part of their plan to draw attention to the strike.

“The mine will do horrific damage to our environment,” said 17-year-old Akira Ourique, who will miss celebrating his 18th birthday on Feb. 25 so that he can be in Ottawa to participate. “It will create a massive risk for fresh water in the area.”

Akira, who is from Hamilton, is joining the hunger strike in protest of the project. He said he expects the number of participants to grow as the strike gains momentum.

“What we want above all is for all people to be aware of what’s going on with the decision,” he said. “Even if we are very young, we will get action.” 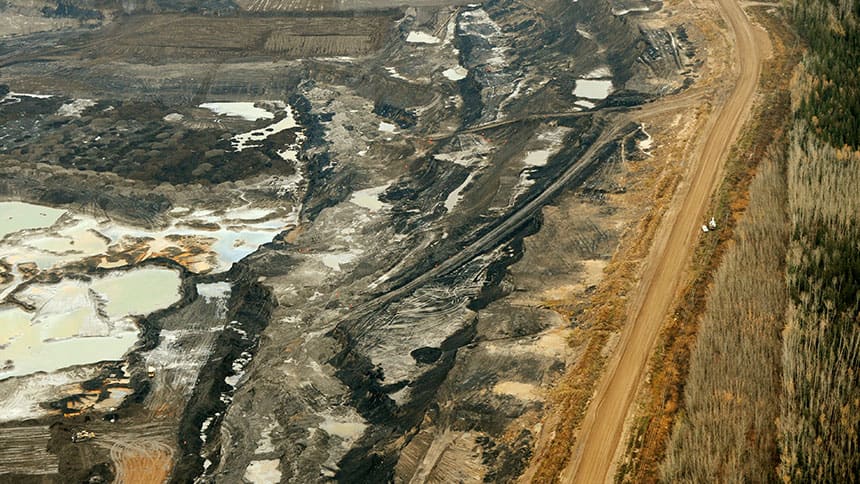 A view of an oilsands mine near the town of Fort McMurray in Alberta, which is about 120 kilometres south of where the proposed Teck Resources mine is set to be built. (Mark Ralston/AFP/Getty Images)

The massive project would span more than 292 square kilometres, more than twice the size of Vancouver.

Akira is also worried about the impact it would have on the environment because of the carbon emissions the oil would generate.

Strike could last for ‘indefinite’ amount of time

A hunger strike is a non-violent protest method that involves a person or group of people going without food for a period of time.

According to a news release, organizers of the Teck Frontier hunger strikes said they will last for “an indefinite period of time.” 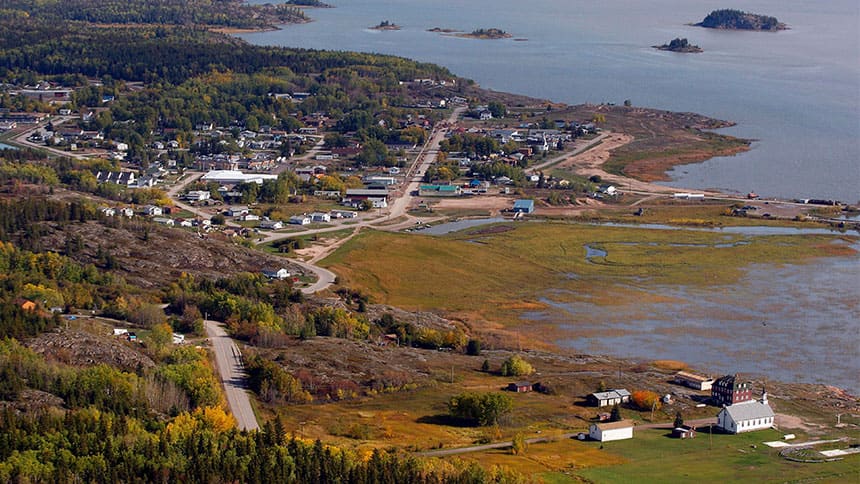 A view of Fort Chipewyan, Alta., close to where the project would be built. (Jeff McIntosh/The Canadian Press)

“I am very nervous, personally,” Akira said about not eating. He does plan to drink water.

“No one should have to be in this position.”

But he said it’s something he feels he has to do.

Risks of a hunger strike

Hunger strikes are known to pose many risks. Those risks are determined by a person’s physical condition before they start.

“This is a slow way to die,” David Jenkins, a nutritional sciences professor at the University of Toronto, told CBC Kids News.

When someone goes without food, Jenkins said their body will first break down stored fat cells for energy (a process also known as ketosis).

Once fat stores are used up, the body will then take from its muscle mass to create energy, which can eventually lead to organ failure.

Here's what can happen to your body after not eating for several days to several weeks: 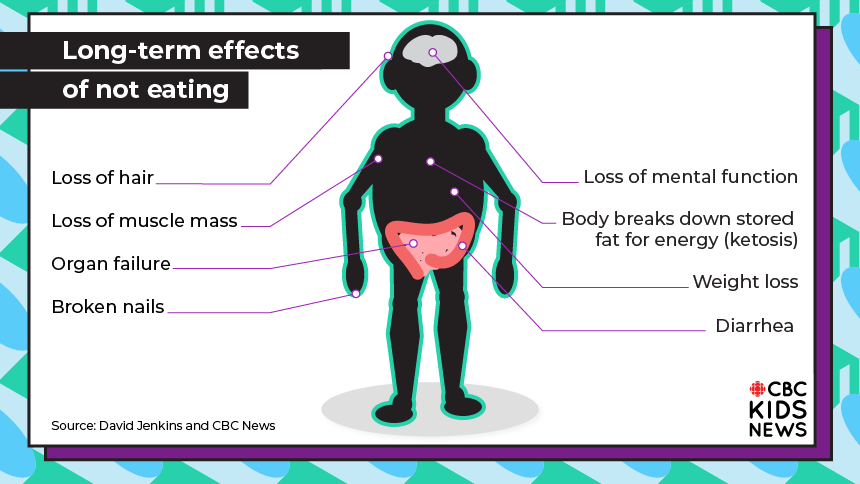 Although there’s no clear answer to how long a person can last without food, some evidence suggests it can be somewhere between eight to 12 weeks.

Jenkins said the recovery can be long and risky because people have to be careful not to overload a starved body with too many nutrients.

A long list of people have gone on hunger strikes in the past for their own causes.

Some were successful — and struck deals with various governments — while others died during their protests. Others gave up for a variety of reasons, including medical issues.

Here are some of the most notable hunger strikers in history: 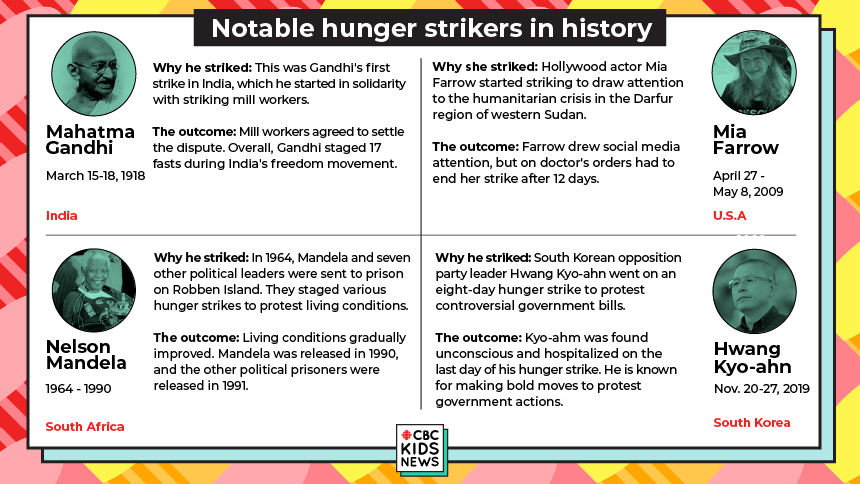 During the 1981 Irish hunger strike, one of the most notable strikes in history, 10 participants between the ages of 21 and 29 died. One of them lasted for 71 days without food.

Jenkins said long-term effects after a person has ended their strike are also common, but not entirely known to scientists.

Environment vs. economy: Which one will win?

While Trudeau has made a commitment to fight climate change, Teck Resources’ controversial project has sparked the following question:
Is Trudeau as green as he says he is?

Some are tweeting at the prime minister directly, urging him to protect future generations. 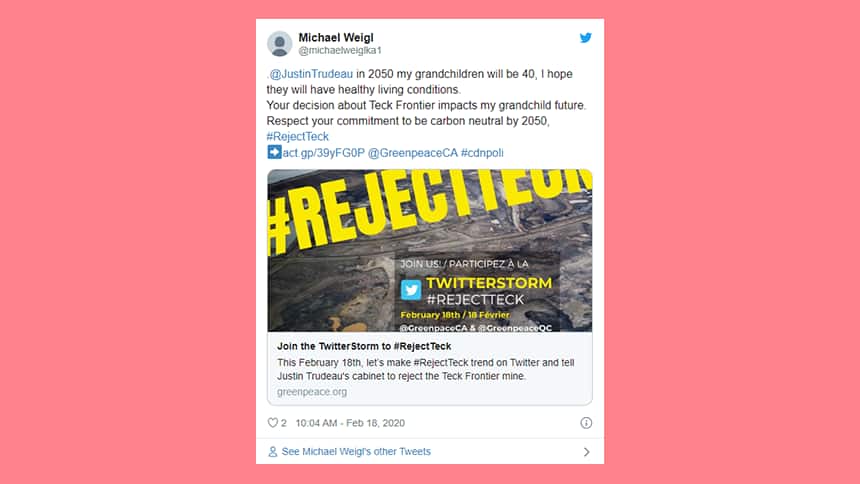 Some celebrities have also spoken up. 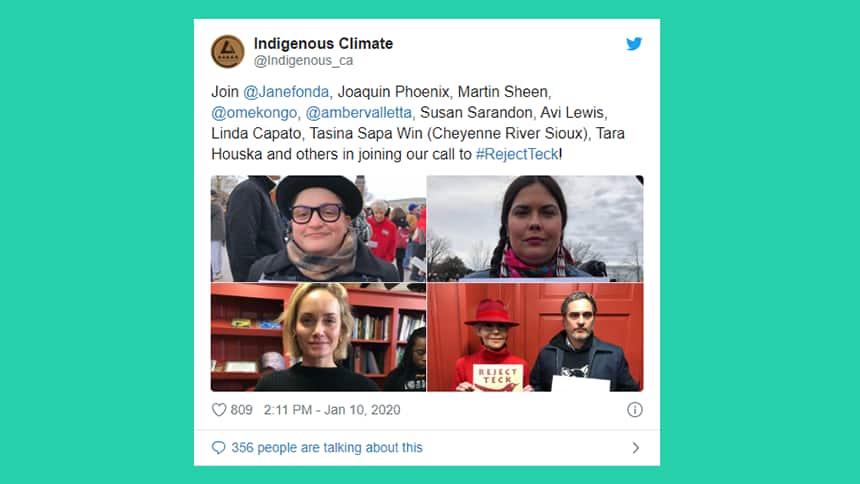 Those in favour of the project say it will benefit Canada’s economy.

The mine is expected to create as many as 9,500 jobs and generate about $70 billion during its four-decade life, according to Teck Resources.

Those opposed say the project will have negative environmental impacts on nearby wetlands, forests, at-risk species (including the Canada lynx and woodland caribou), the Ronald Lake bison herd and the culture of Indigenous groups who use the area.

The project is estimated to emit about 4.1 million tonnes of CO2 per year.

The project would also result in 240 million cubic metres (about 100,000 Olympic-sized swimming pools) of tailings ponds on the landscape by 2037. 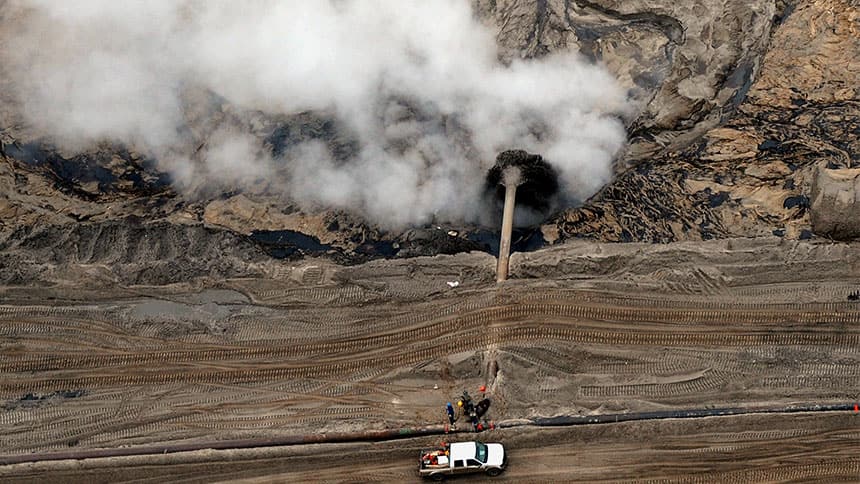 Tailings ponds, like this one near Fort McMurray, are a mixture of clay, oil, sand and water. They are used to store waste created by mines. (Mark Ralston/AFP/Getty Images)

Environmental groups have questioned how allowing the mine would align with the government’s Paris commitment, which aims to limit global temperature increases to reduce the risk and impacts of climate change.

CBC Kids News reached out to the federal government for comment, but has not yet heard back.

CORRECTION: In a previous version of this article we had written that Akira's parents were supportive of the hunger strike. That reference was deleted February 22 after Akira's mother, Yuki Hayashi, wrote us to say she is extremely worried about her son going on a hunger strike and, "even more disappointed that young adults feel they need to engage in self harm to be heard by the media and government on this issue." 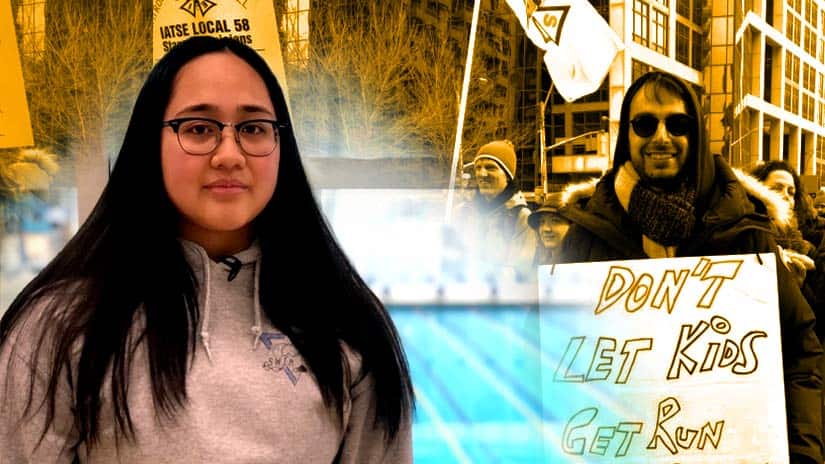