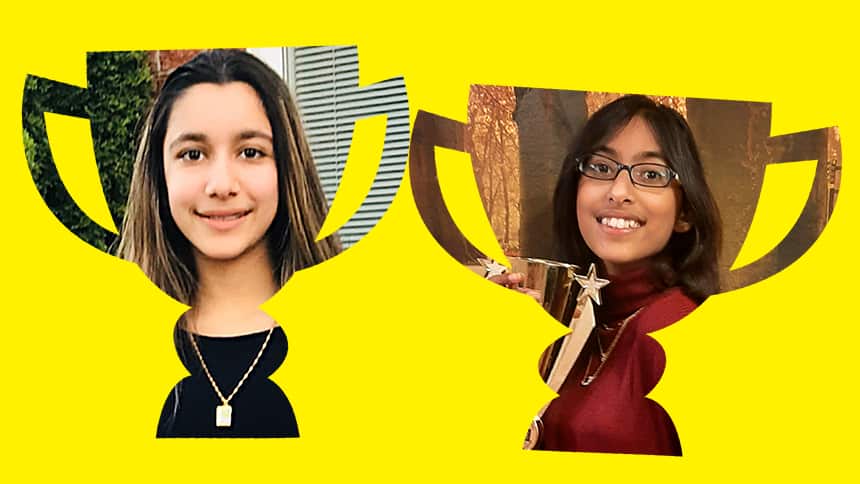 Spelling Bee of Canada winners on how to spell success

How did Leena Jalees feel when she found out she was going to have to spell the word “taxonomist” in order to win her category at the national spelling bee?

“I was so relieved,” said the 12-year-old in an email to CBC Kids News.

Turns out taxonomist, which refers to a person who classifies plants and animals, is “an easy word” to spell for the tween from Ontario’s Niagara region.

She nailed the challenge and won first place in the intermediate category — for kids aged 12 to 14 — at the Spelling Bee of Canada championships on Nov. 29.

The focus of the annual competition is to see which Canadian kid can spell the most difficult words correctly.

For the first time in its 33-year history, the event took place online, due to COVID-19 restrictions. 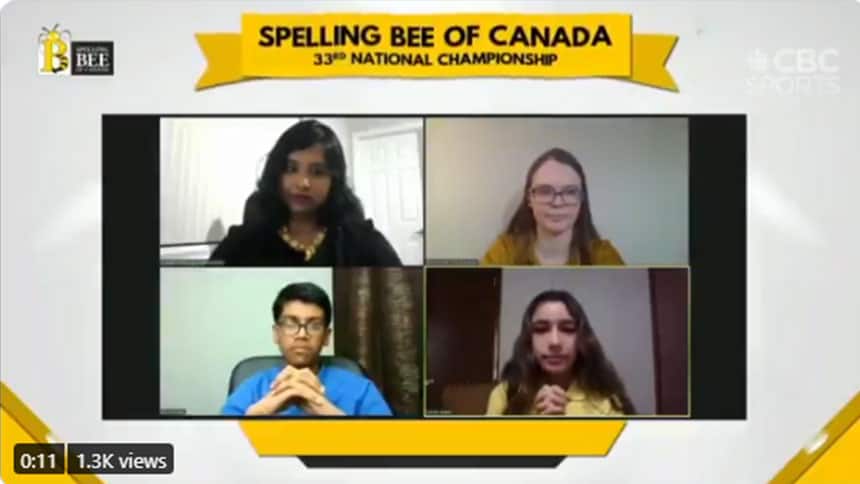 Leena Jalees, bottom right, was so focused after spelling taxonomist correctly that somebody off screen had to tell her that she’d just won the national championship. (Image credit: CBC Sports/Twitter)

Muskan Jiwa has two words to thank for her win in the junior category, which is for kids aged nine to 11.

The 11-year-old from Edmonton, Alberta, had to spell “Hansard,” which is the official record of a parliamentary debate.

The bonus word that confirmed Muskan’s win was “espresso,” which is a type of strong black coffee.

Those are pretty memorable words, but they aren’t her favourite. 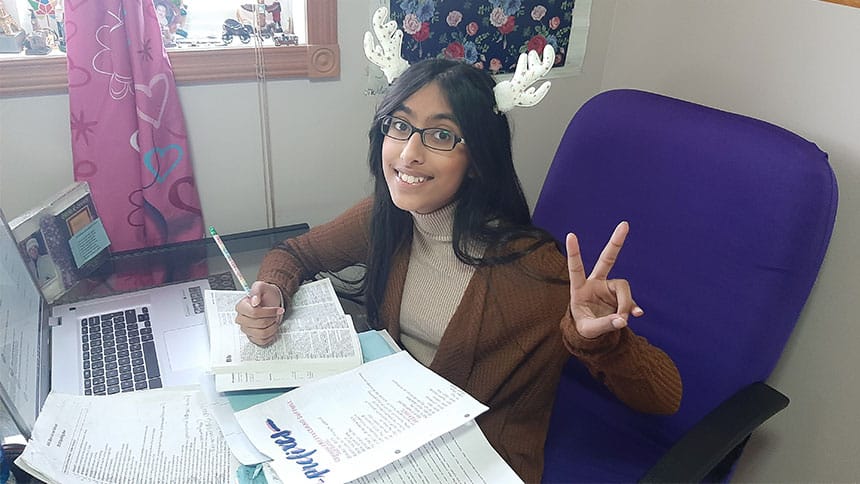 When learning a new word, Muskan Jiwa said, it’s important to understand it before you add it to the ‘hard drive’ that is your brain. (Image submitted by Muskan Jiwa)

"Septuagenarian" is. (Don’t worry, we triple-checked the spelling!) It means someone who is between 70 and 79 years old.

“It's pronounced ‘moo,’ and it means a pouting expression used to convey annoyance or distaste,” she explained.

It’s possible Leena made a moue when asked to spell the word “polemicist,” which refers to somebody who debates aggressively and skilfully.

That was the “hardest part of the competition,” she said.

At first, Leena said, she thought it was a medical word ending in “cyst.” But when she learned the definition had to do with politics, she decided to spell it with a “cist” instead. 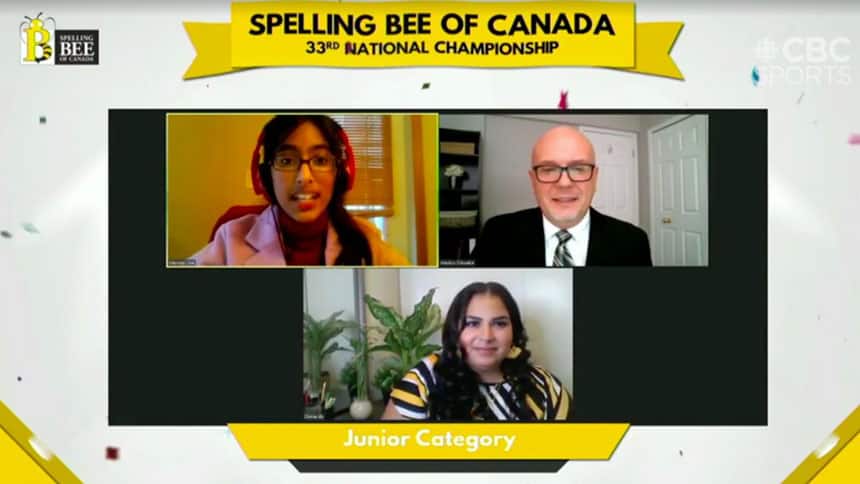 For Muskan, the toughest moment had nothing to do with words and everything to do with technical difficulties related to the video-conferencing software they were using.

Thankfully, the spelling bee’s technical staff were “patient and calm,” and they managed to work through the glitches, she said.

Tips for becoming a champion

Before spelling a word out loud, she said, you should break it down in your head, then take your time presenting the answer.

“Don't rush too fast or you may switch up the order of the letters,” Leena said. 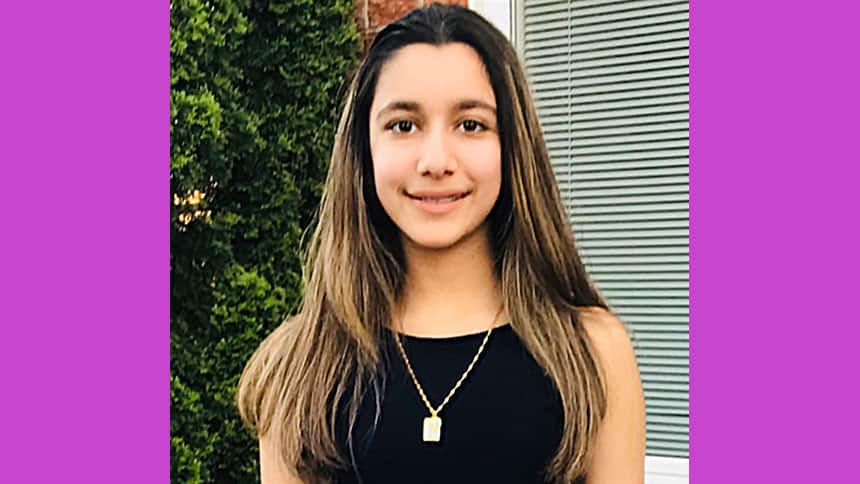 Leena said she likes spelling bees because they build your confidence, expand your vocabulary and give you the chance to meet like-minded people. (Image submitted by Leena Jalees)

It’s also a good idea to read a lot, on a diverse range of topics, said Muskan.

“Explore medical terms, food and cultures, mythology and many more,” she said.

And don’t forget to look up any words you encounter that you don’t know, Muskan said.

If you missed the live stream of the event, you can watch a 90-minute recap show, presented by CBC Sports.

It will be available at CBCSports.ca and on the CBC Sports YouTube channel as of 9 a.m. ET on Dec. 6. 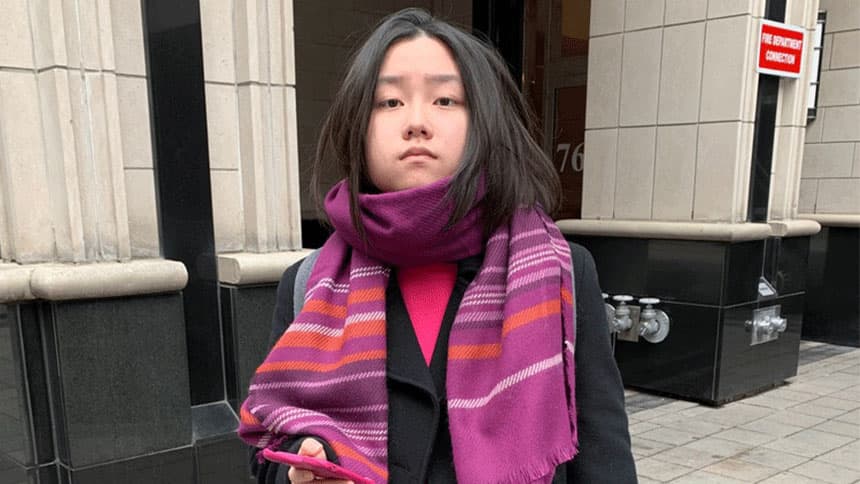