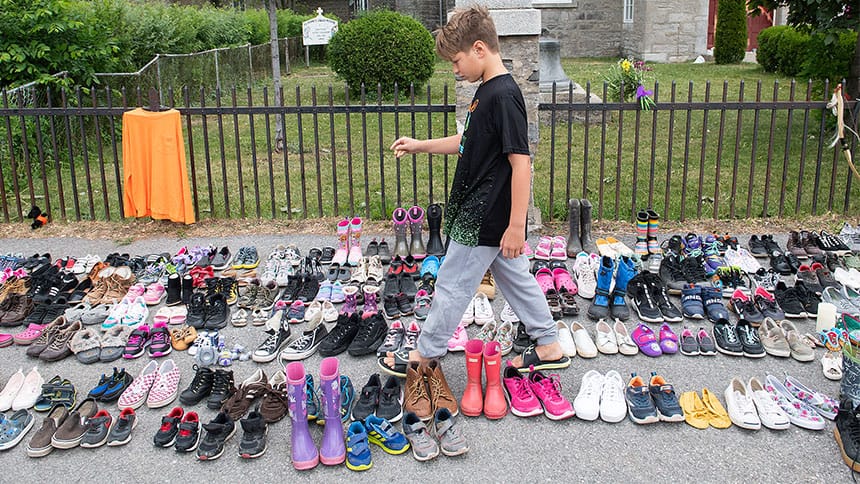 Jamieson Kane puts down tobacco as a tribute to all the victims of the residential school system outside St. Francis Xavier Church in Kahnawake, Quebec, on Sunday. (Image credit: Graham Hughes/The Canadian Press)

Some kids wearing orange shirts to honour the victims

Canadians are coming together in all parts of the country to mourn the lives of children who died while in a residential school.

The reaction comes after members of the Tk’emlúps te Secwépemc First Nation in Kamloops, British Columbia, shared some disturbing news.

Using a special technology called ground-penetrating radar, they said a survey indicated the remains of 215 children were detected on the site of the former Kamloops Indian Residential School.

Kukpi7 (Chief) Rosanne Casimir told CBC News the findings are preliminary and the investigation is in its early stages.

“Our community has been informed of the potential findings and know that a report is still yet to come,” said Casimir.

“We need to honour these children,” she told CBC.

While there are still many questions to be answered, the discovery has motivated many Canadians to speak out about the disturbing history of residential schools in Canada and to show their support for Indigenous families.

Between 1831 and 1996, thousands of First Nations, Inuit and Métis children were taken from their communities and forced to go to boarding schools across Canada called residential schools.

The schools were funded by the Canadian government and run by Christian churches or provincial governments.

The schools attempted to strip children of their Indigenous culture.

They were not allowed to speak their own languages or practise their traditions. 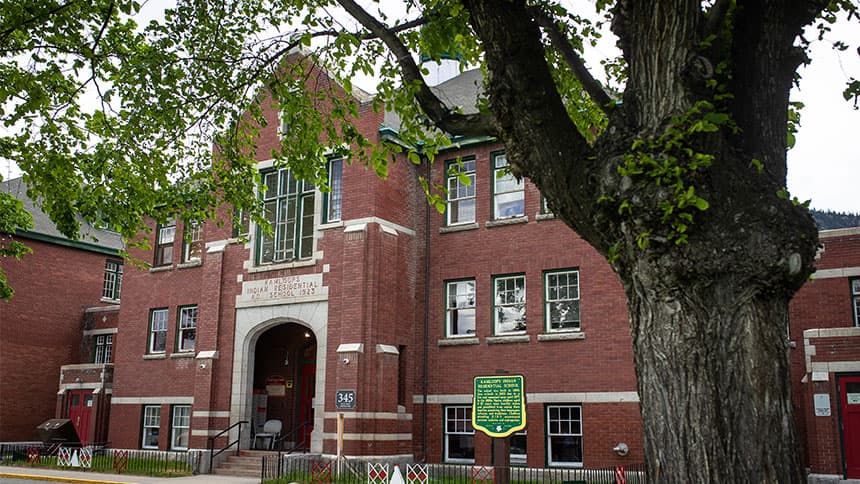 As news of the discovery spread over the past few days, Canadians stepped up to show their support.

Some reacted by placing shoes at memorials in various communities and cities.

The shoes represent the children who died at the school. 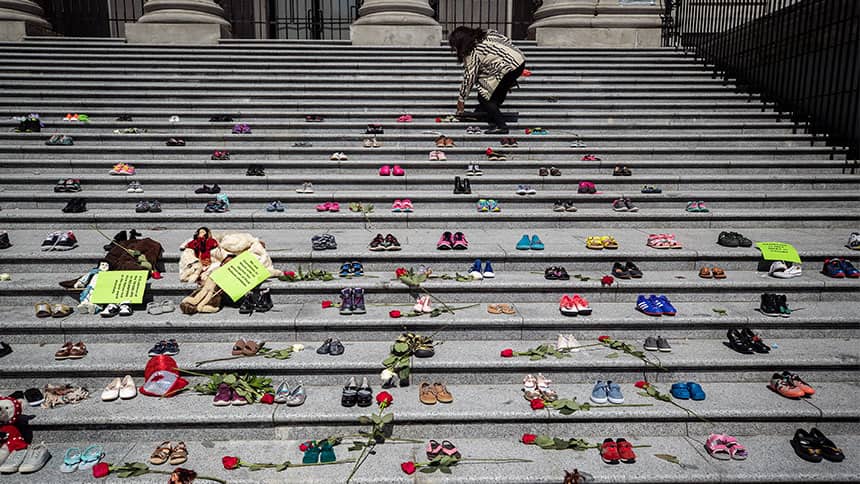 Delhia Nahanee of the Squamish Nation places a rose on one of 215 pairs of children's shoes on the steps of the Vancouver Art Gallery in British Columbia. (Image credit: Darryl Dyck/The Canadian Press) 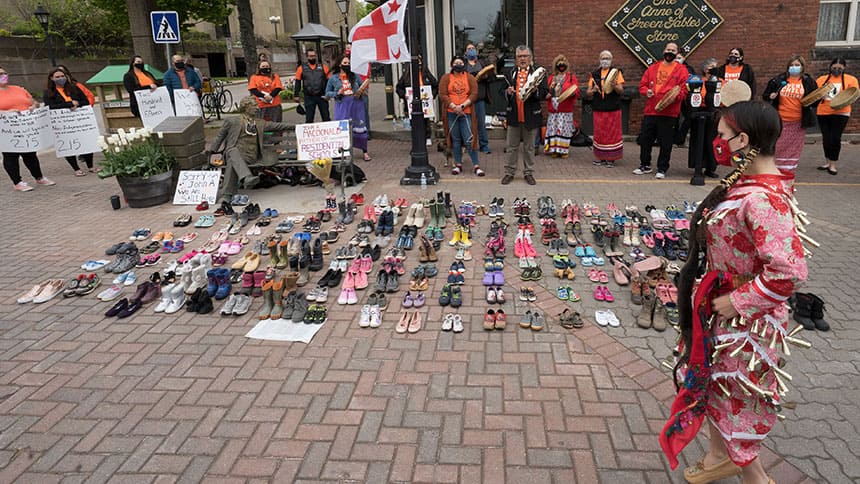 An Indigenous dancer performs around the 215 pairs of children's shoes placed next to a Sir John A. Macdonald statue in Charlottetown, Prince Edward Island, on Monday. (Image credit: John Morris/The Canadian Press) 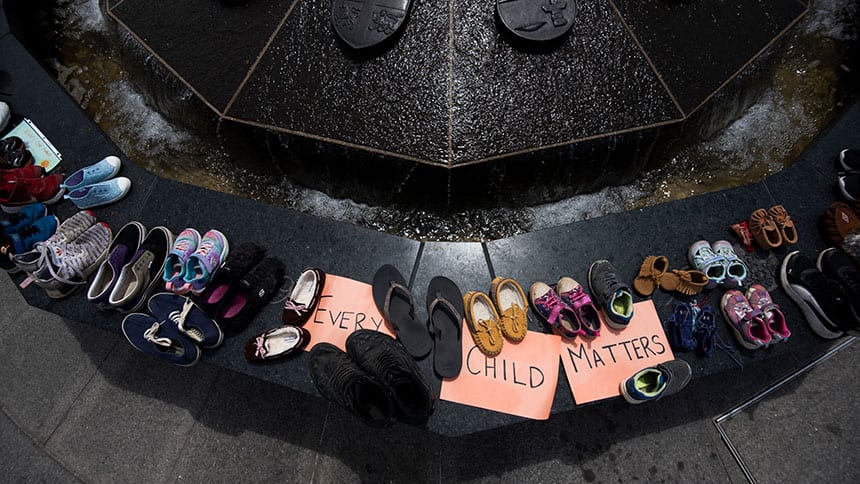 Memorials were also organized and flags were lowered to half-mast on all federal buildings. 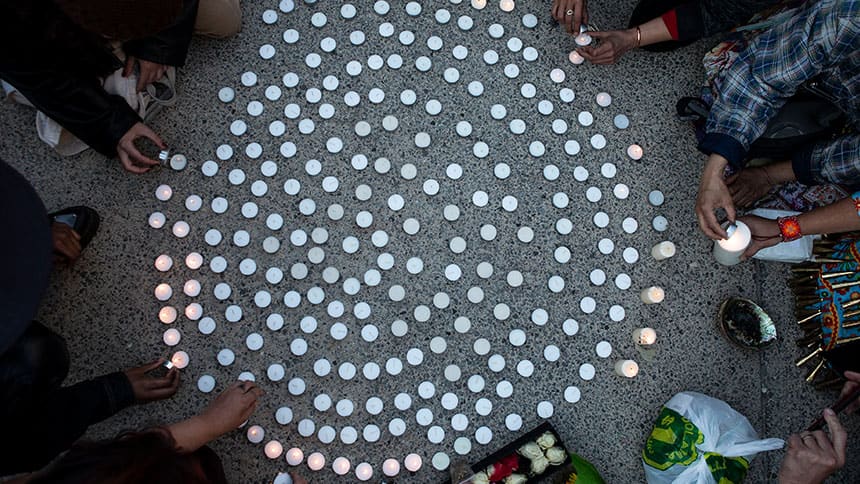 Candles are lit during a vigil in Toronto on Sunday, May 30. (Image credit: Chris Young/The Canadian Press)

Many kids were also encouraged to wear orange shirts to school on Monday to show support for Indigenous communities. 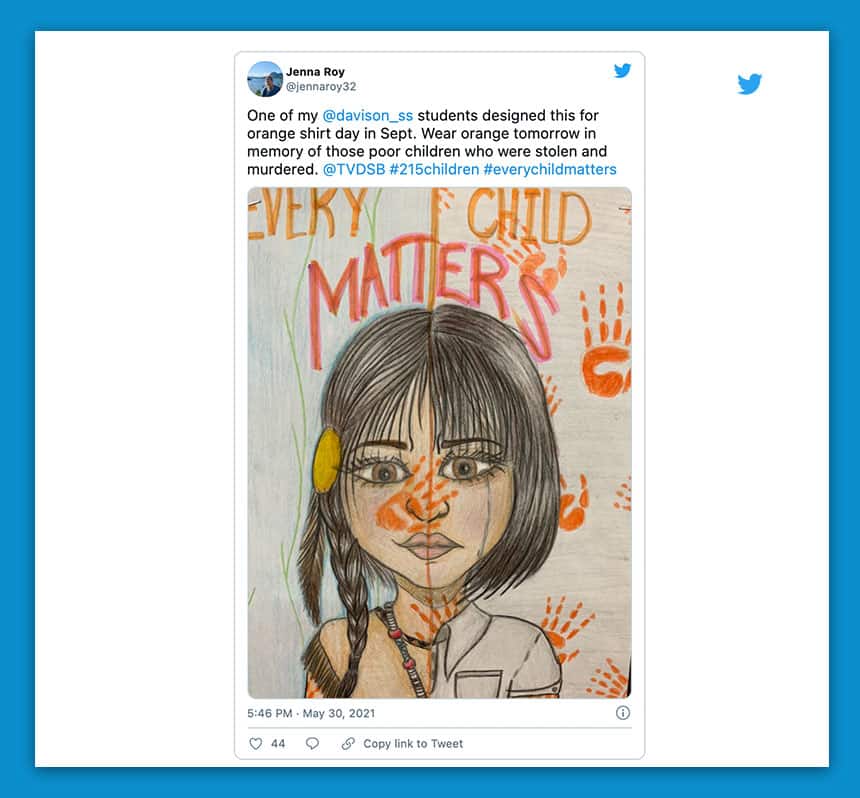 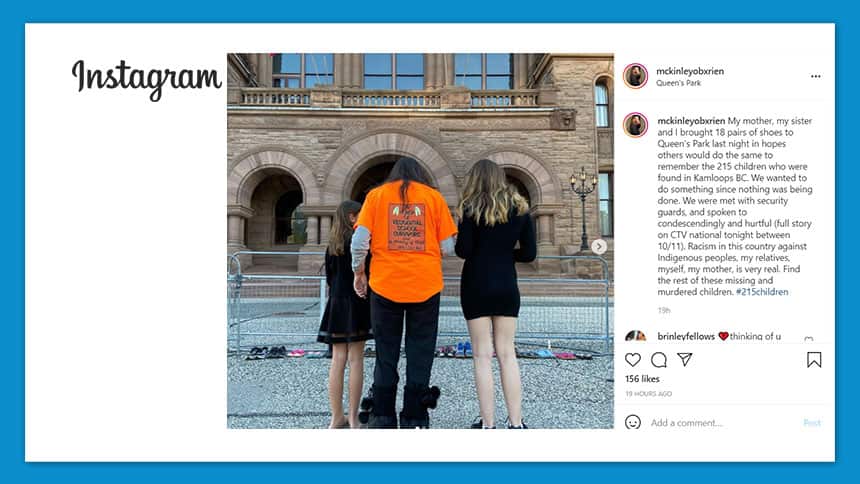 Orange Shirt Day usually happens every year on Sept. 30, and is meant to help kids understand the harmful impact that Canada’s residential school system had on Indigenous people.

“Residential schools were a reality — a tragedy that existed here, in our country, and we have to own up to it.”

Trudeau also announced the government would provide support to survivors of residential schools, but didn't give details on what that would look like.

Why did children die?

Sadly, many kids were abused at residential schools and some died.

Most were sick or starved.

The National Truth and Reconciliation Commission, a committee established in 2008 to examine the impacts of residential schools on Indigenous people, has records of at least 51 children dying at the Kamloops Indian Residential School between 1915 and 1963.

Overall, it estimates about 6,000 children died at residential schools across Canada from 1831 to 1996.

Rosanne Casimir said, “To our knowledge, these missing children are undocumented deaths.” 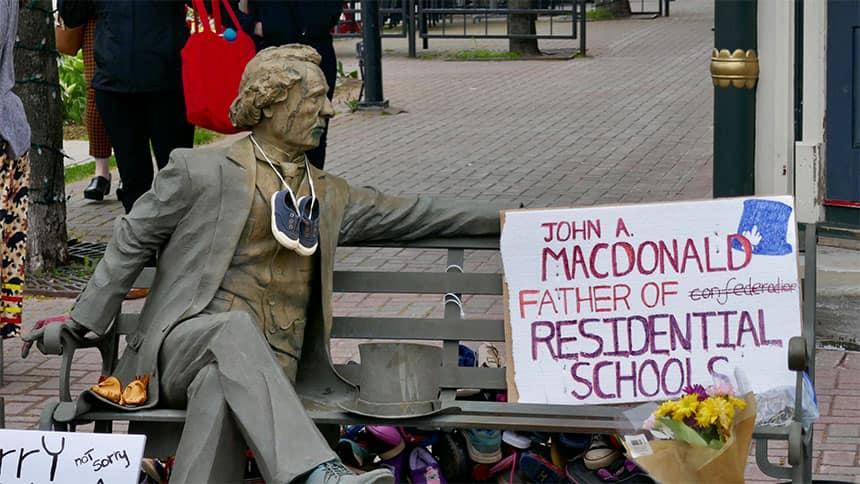 In Charlottetown, a memorial was set up beside the statue of Canada’s first prime minister, Sir John. A. Macdonald. He was instrumental in setting up the residential school system. (Image credit: John Robertson/CBC)

How were the remains discovered?

Casimir said the remains were discovered just over a week ago with the help of ground-penetrating radar. 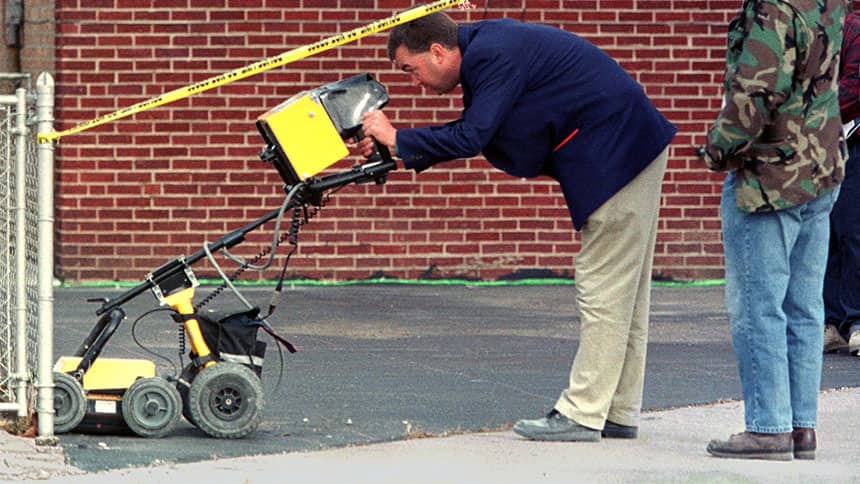 The remains haven’t actually been removed, but that could eventually happen, according to B.C. Assembly of First Nations Regional Chief Terry Teegee.

He said discussions are underway to identify and return the remains to the families.

Indigenous leaders say there could be more undocumented remains at other residential schools in Canada using the same type of technology.

A National Indian Residential School Crisis Line has been set up to provide support for former students and those affected. The 24-hour national crisis line is: 1-866-925-4419.

Watch this video to learn more about the word Indigenous: 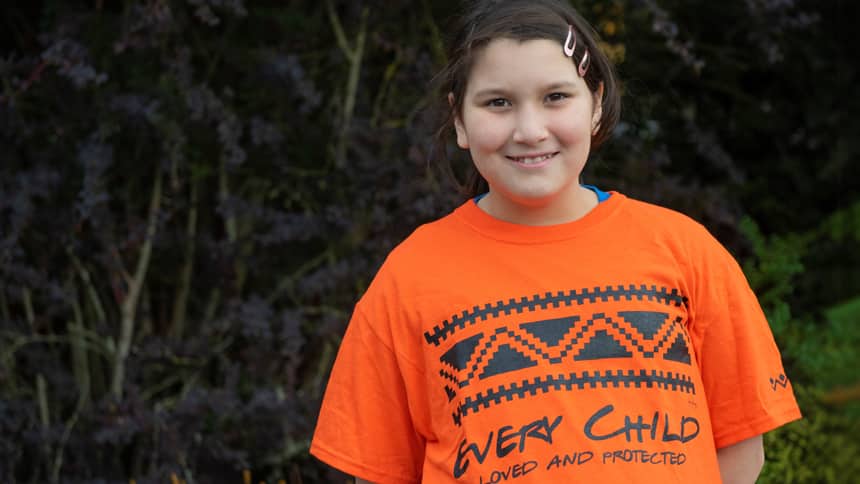 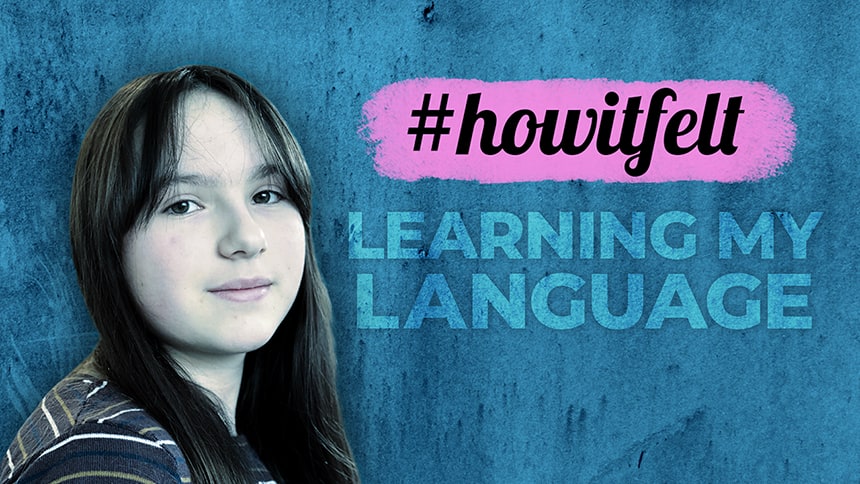 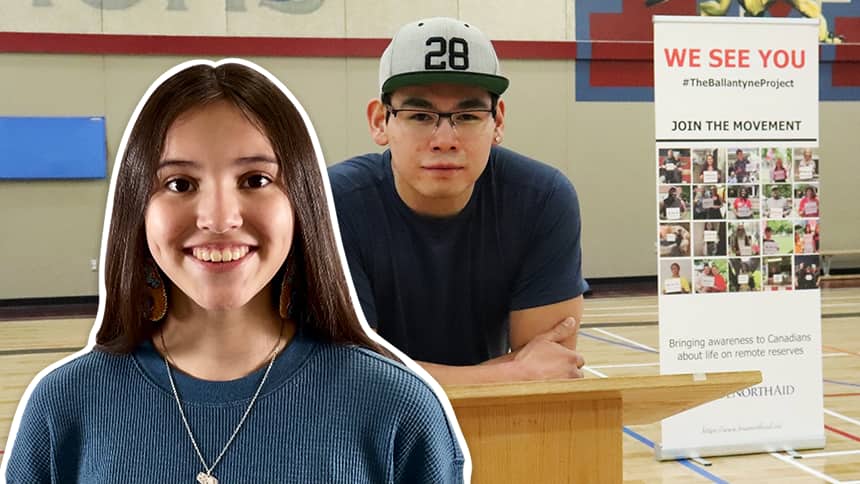