RECAP — Will the coronavirus crash the internet?

Can you imagine your world without the internet?

Sure social distancing is the new normal, but I can’t imagine doing it without some quality memes online!

With so many of us home from school, and our parents perhaps working from home, the demand on the web has never been higher.

And some are fearing a coronavirus-related internet crash. Could it really happen?

Watch the latest episode of RECAP to hear host Myah Elliott as she tries to flatten the curve and settle your nerves when it comes to the possible limits of the internet. Huge demand on the internet

Can you think of another time when so many people were at home and online?

A lot of kids who aren’t in school are on their devices.

From YouTube and Netflix to gaming and Google, just about every site you can imagine is experiencing a surge in traffic and demand.

On March 20, Netflix and YouTube announced that in Europe, they would be reducing the streaming quality on their services for a month to prevent too much strain. 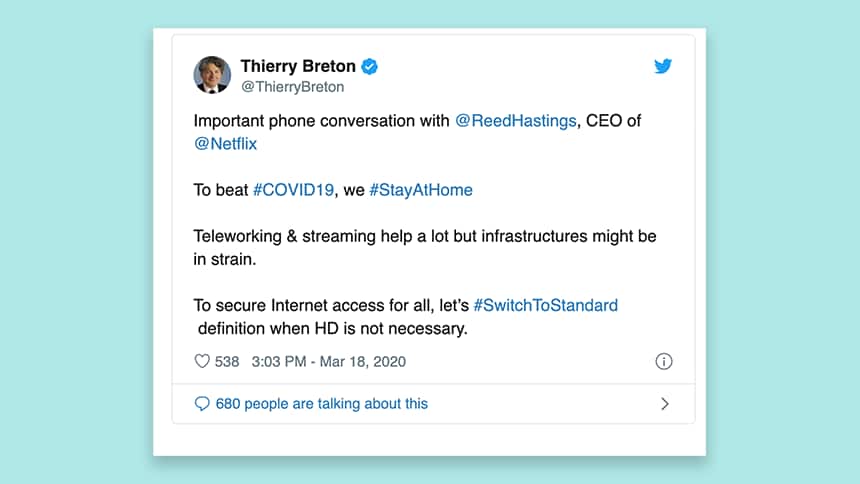 In a statement to CNN Business, a Netflix spokesperson said that by lowering the quality of video streams, it hopes to lower internet usage by 25 per cent.

The change won’t be too noticeable, Netflix said. It has yet to announce any changes to its North American services.

Everything won't necessarily be ‘100% fine’

Anja Karadeglija, telecommunications journalist and editor of the Wire Report, isn’t worried that the internet will go down in Canada.

“But that doesn’t mean that there won't be some effects. I’m not saying everything is going to be 100 per cent fine,” said Karadeglija. 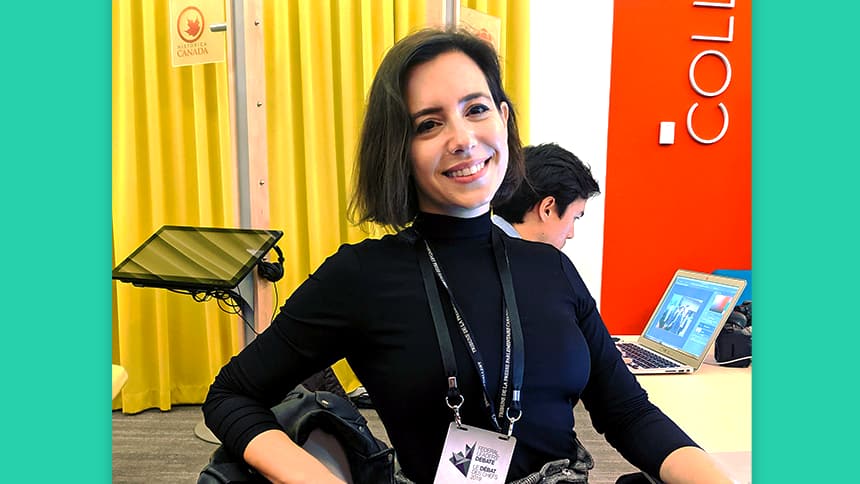 Anja Karadeglija specializes in reporting on news about the Canadian telecommunications and media industry. She isn’t worried about the internet crashing. (Twitter/AnjaKaradeglija)

Applications that require more bandwidth or use of the internet will likely be affected first.

Especially when using “intensive applications” like playing online video games, like the latest Animal Crossing: New Horizons, or streaming live video of yourself.

“You might start to have difficulty with the connection, with lag, with latency. But that’s not the same thing as the internet going down,” said Karadeglija.

Remote, isolated communities might find their internet is most affected with these demands as the connection for copper, or dial up lines, isn’t as strong, she said.

Online reaction to a potential crash

This week, the internet was buzzing with concerned internet users. 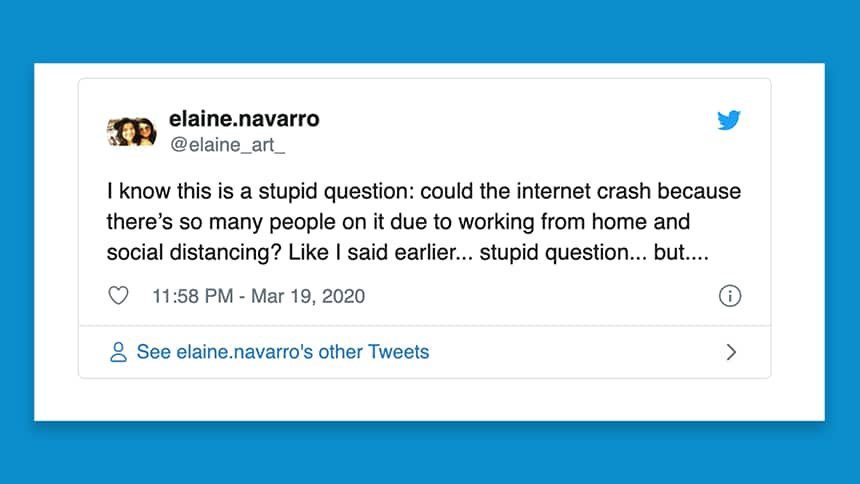 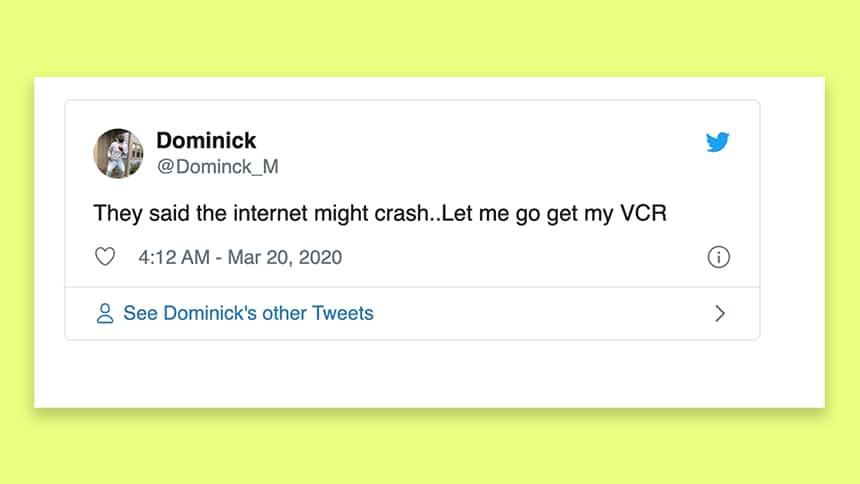 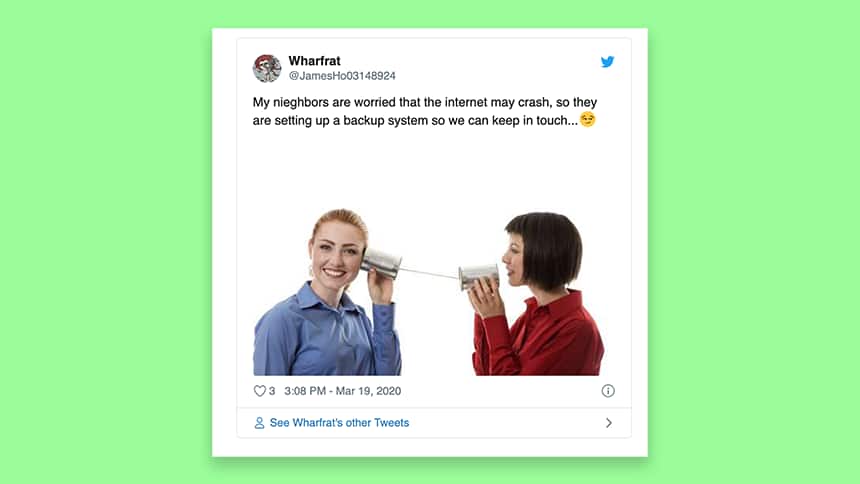 Internet capacity is geared towards ‘peaks’

So, what is preventing the internet and our data providers from being overloaded?

Karadeglija said the demand on the internet did not “happen overnight,” and internet service providers (known as ISPs) have had some time to make changes and increase capacity.

According to Karadeglija, internet providers are already “geared for peak capacity.” Meaning that they can already handle the rush of people heading home at the end of the day and streaming Netflix.

And if ISPs can handle that kind of peak capacity already, they can work during other times too.

“That capacity still exists on the network. It’s not time sensitive,” said Karadeglija

And the second reason why the internet won’t go down?

If we’re asking these questions, ISPs were thinking of the same questions weeks ago, and are already focused on being prepared and increasing capacity, she said.

Internet and data providers ‘doing their part’ to help

In Canada, internet and data providers like Rogers, Bell, Telus and TekSavvy are temporarily removing data limits for home internet customers, at least until April 30.

This will help concerned customers who are working or studying from home from being charged for using too much data or going over their internet download cap.

Will you be one of the thousands online and playing the new Animal Crossing game? (Nintendo)

CBC Kids News reached out to Bell, Rogers and Telus for comment on how COVID-19 might affect their service. We heard back from Bell.

In an email statement, Nathan Gibson, senior manager of media relations at Bell, noted that despite an increase in traffic at all hours, it is ready to meet the demand.

Be considerate when downloading

Although downloading many movies or playing loads of intensive video games won’t crash the internet, it might cause your neighbour’s internet to lag, or streaming video to stop.

Karadeglija urged everyone to use the internet responsibly — try not to use more than you need, nor download a bunch of stuff at the same time, she said.

“We all have to be considerate at this time with each other; the same thing translates to how we use the internet.”