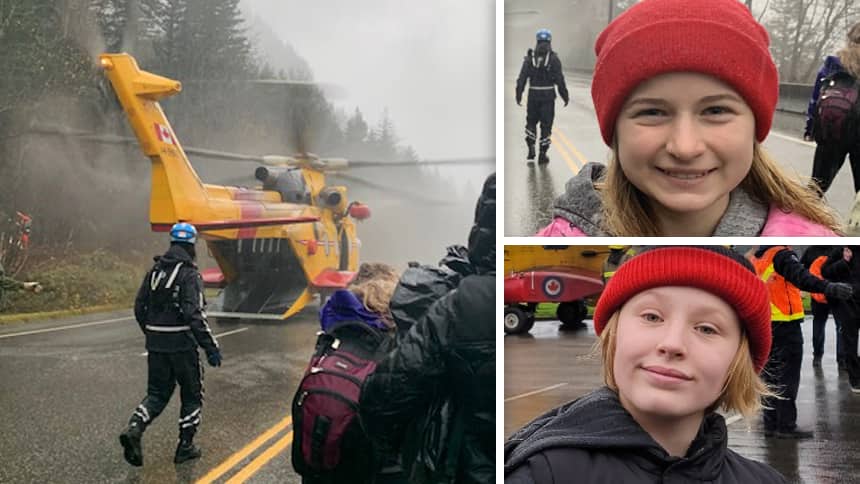 Nikola Martinkova, top, and Payton Stronach, bottom, were both rescued by a helicopter on Nov. 15 after spending a night stranded in their vehicles. (Images submitted by Martina Martinkova and Mike Stronach)

Kids share rescue stories after getting stranded by B.C. mudslides ﻿

They used rainwater to fill their bottles

Nikola Martinkova and Payton Stronach don’t know each other, but they have a lot in common.

They’re both 12, from British Columbia, and they share an incredible survival story.

﻿Both were stuck, along with about 300 other people, in their cars overnight when mudslides closed the highway they were driving on last week.

﻿Heavy rain on Nov. 14 caused roads and bridges to be washed out by mud and fallen trees.

The next day, they were airlifted by helicopters and brought to a rescue centre in Agassiz before they made their way home.

﻿It was a unique experience for these two Canadian kids and CBC Kids News asked them to reflect on it and share the details they’ll likely never forget.

Nikola is from North Vancouver and Payton is from Aldergrove. They got stuck on Highway 7 near Agassiz. (Graphic design by Philip Street/CBC)

Nikola was travelling with her mom from Kelowna, which is about 600 km from home, where they were visiting family for the weekend.

“It was dark and rainy most of the time,” she said.

“I hadn’t thought we’d get stuck anywhere. I thought it was a bad storm and I wanted to get out of it as fast as possible. And then we got trapped.”

Nikola and her mom thought they were stuck in traffic, but in fact the cars had stopped because there was nowhere to go in either direction due to mudslide debris blocking the road.

After some time, they realized they’d have to spend the night.

“I was in shock,” said Nikola. “After a couple of minutes and everything processed, I started having a panic attack,” she said.

“My mom said we have to get through it together and help each other calm down. That helped.” 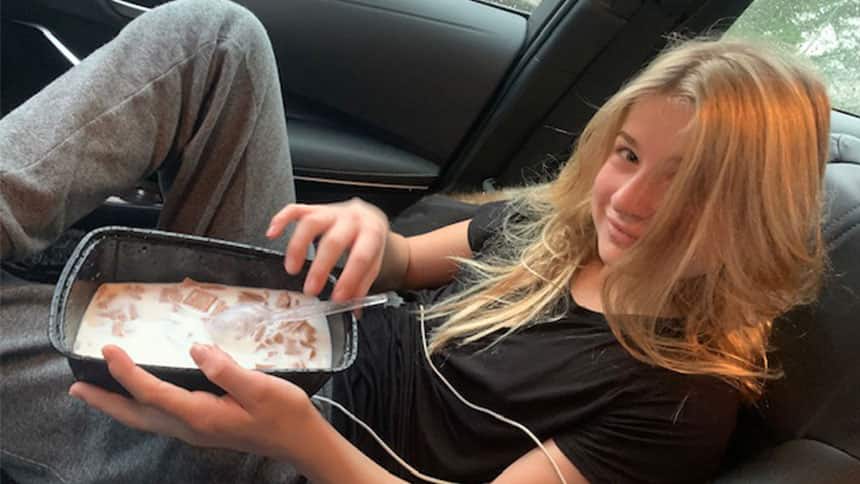 Luckily, before leaving the family she was visiting in Kelowna on Nov. 14, Nikola was given her breakfast in a large container. She later used it to collect rainwater on the roof of her car. (Image submitted by Martina Martinkova)

To pass the time, she watched movies she’d downloaded on Netflix, which also helped her forget about what was going on outside.

Nikola used the skills she learned at a survival camp two summers ago to trap rainwater to drink.

Check out this video of Nikola collecting rainwater:

“At first we put our water bottles on the roof of the car, then I figured out we had three plastic water bottles in the car, so I took scissors and cut around the middle so we could catch more.”

Luckily, Nikola also had a food container with a wide diameter so it caught even more water.

“It tasted fine. I bet it wasn’t the cleanest,” she said.

Other people trapped on the road were sharing their food.

“Everybody put their food near their windshield and if people didn’t have, they would [share],” she said.

Someone who had two cows was walking around in the rain, asking if anyone had buckets in their car so they could feed them.

“My mom has a cleaning company so she had two buckets,” said Nikola, and they were able to help. 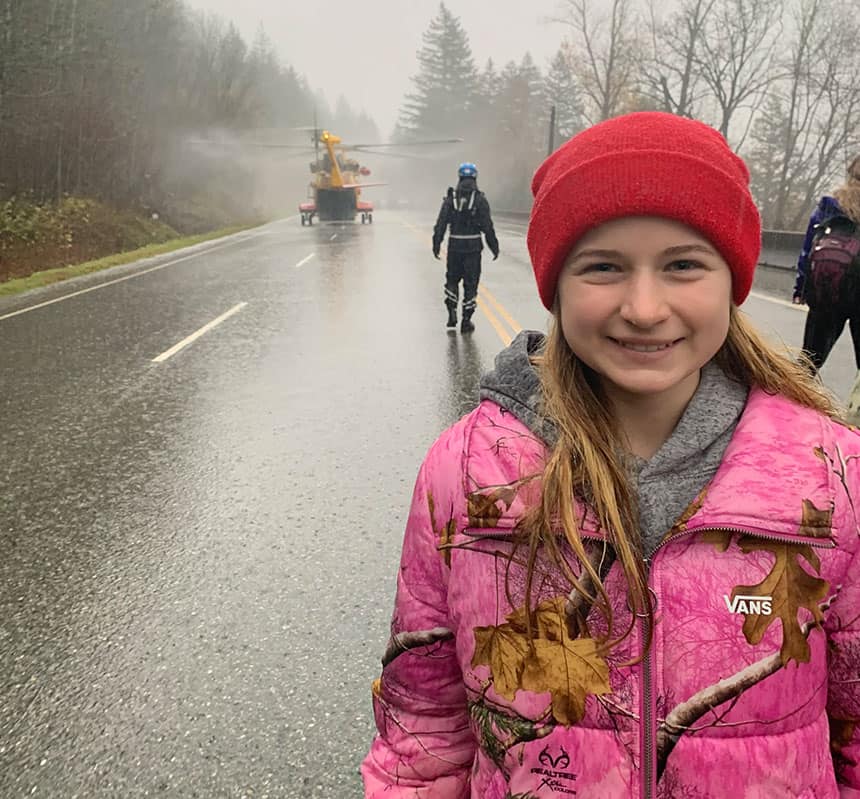 Eventually, Nikola was taken to safety by a military helicopter. Keep reading to find out what the rescue was like. (Image credit: Martina Martinkova)

Payton was travelling with her dad from Summerland, about 350 km away, where they were visiting friends.

As Payton watched the map on the GPS, she saw that traffic was slow in the mountains.

It was raining hard.

When asked what she was thinking at the time, Payton said, “It’s gonna be a long time getting home. I didn’t think it’d be six days.”

Eventually, Payton and her dad reached the same stretch of highway as Nikola, where things hit a standstill.

“As soon as we got in the mountain, we full-on stopped and people started turning around,” she said. 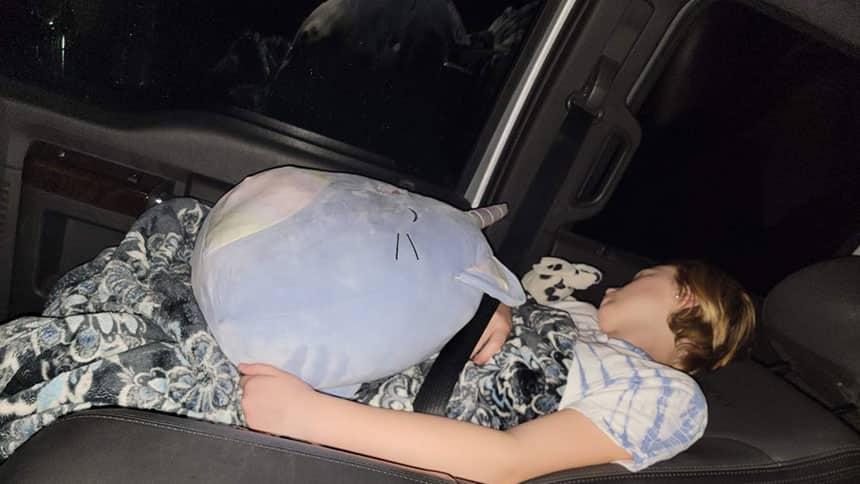 Payton said she was able to sleep in her dad’s truck, but she woke up a lot in the night. (Image submitted by Mike Stronach)

“We rolled down the window and people said there was a mudslide. I started feeling nervous a bit. I wanted to get home.”

They were also stuck and had to improvise.

Payton’s dad had a knife in the car.

“We had a few bottles in the car, a milk bottle and tin cans,” Payton said. “Dad cut off the tops and put them on the top of the car” to collect rainwater.

They ate KitKat bars and read books and tried to sleep.

“The next morning I almost cried. I just wanted to get home,” Payton said. 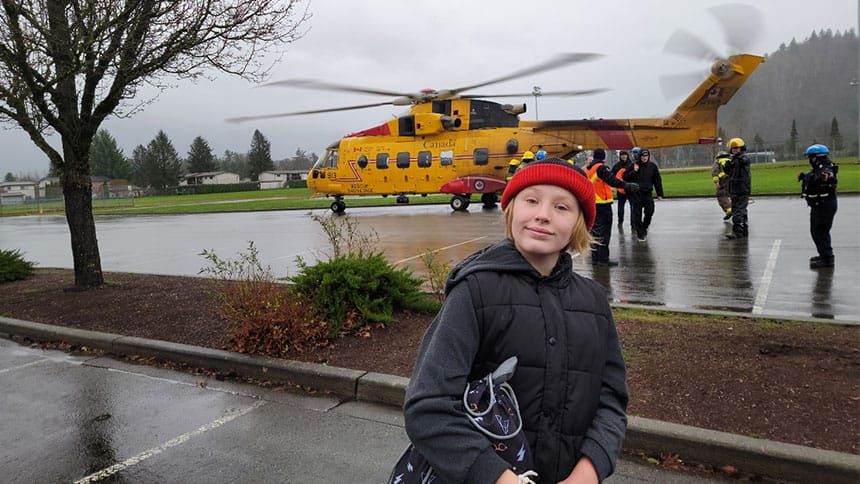 Payton was transported to safety in a military helicopter. (Image submitted by Mike Stronach)

How they were rescued

By the next day, a helicopter from the Canadian military was sent to rescue all the people who were trapped.

Payton said the chopper flew over them a few times first, then stopped and dropped off people who checked on everyone.

“They were directing cars, checking on people, counted how many cars there were,” she said. 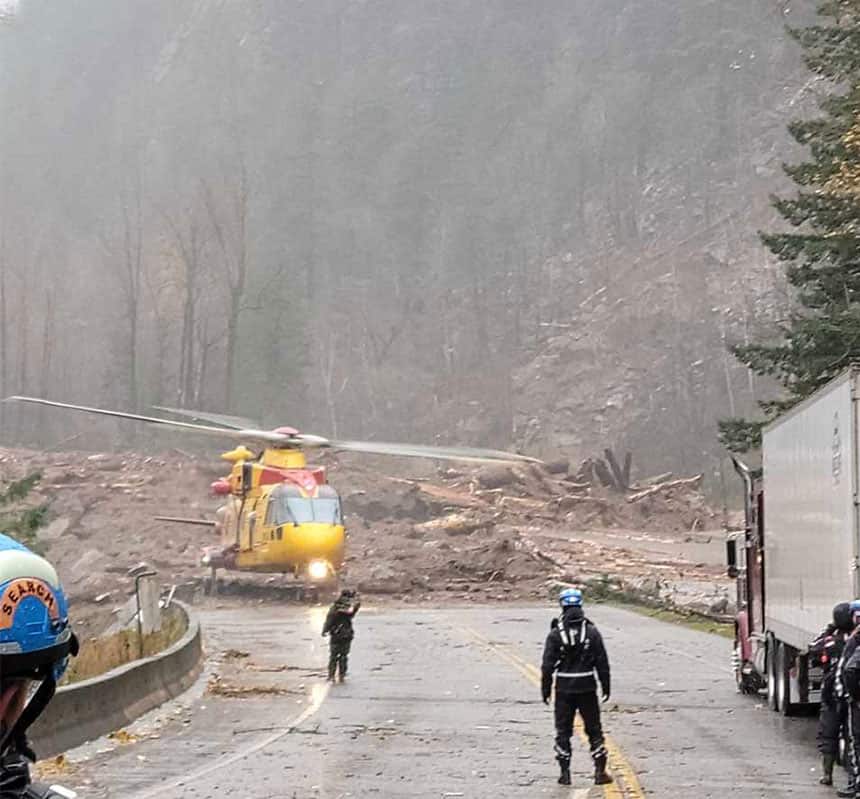 The military helicopter is seen on the highway in front of the mudslide that covered the road. (Image submitted by Mike Stronach)

The helicopter could transport about 40 people at a time and started taking people away from the highway and their cars.

Watch this video of Nikola boarding the helicopter:

“The helicopter ride was very bumpy," said Nikola. “It was also very scary. After everything I went through in 24 hours I was scared something would happen and the helicopter would go down.”

Payton said going in the helicopter was “cool” because she’s only ever been on a small plane once before.

“As soon as I saw a helicopter I thought I was in an action movie,” she said. “It felt it wasn’t real.”

But she said it also freaked her out a bit, especially because the helicopter had open doors and she was able to look down at the ground from above.

“[The mudslide] was way bigger than I expected it would be.”

She also saw parts of vehicles damaged by the slide.

“I saw a piece of a car door and like a whole car that turned to rubble,” she said. “It just got me shaking.” 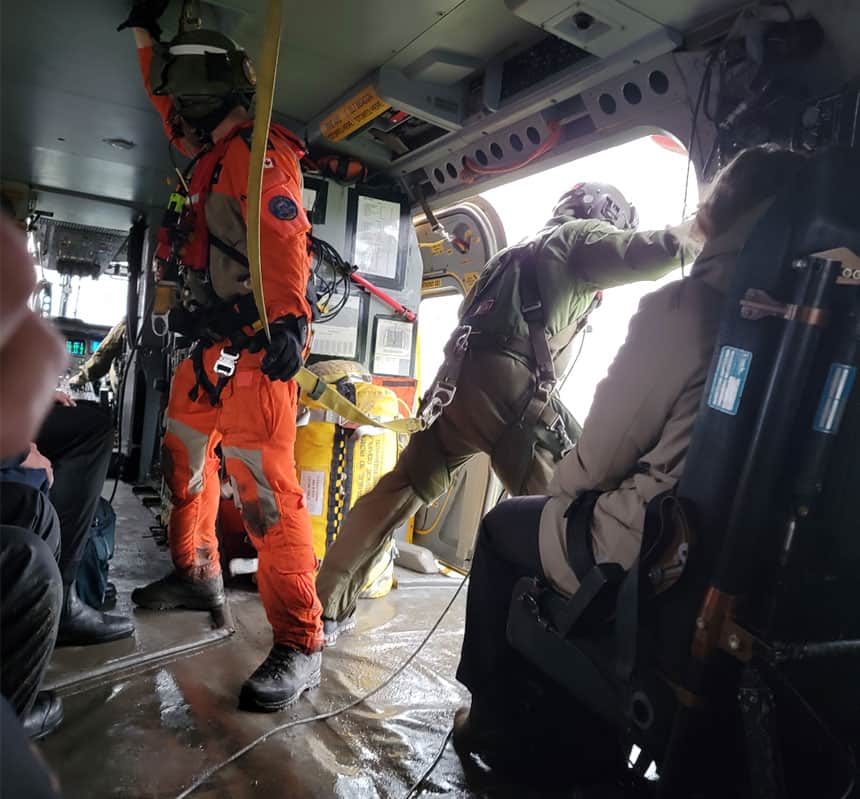 The helicopter had an open door on the side and at the back. (Image submitted by Mike Stronach)

Both girls were taken to nearby Agassiz and brought to a rescue centre, where they were given food, water and even colouring books and stuffies.

Payton’s mom and sister drove from home to get her and her dad.

“As soon as I got into the van with my mom and my sister and my dad, that’s when I realized what just happened,” she said.

“As soon as I was safe and with my family it just hit me. I could have been hurt.” 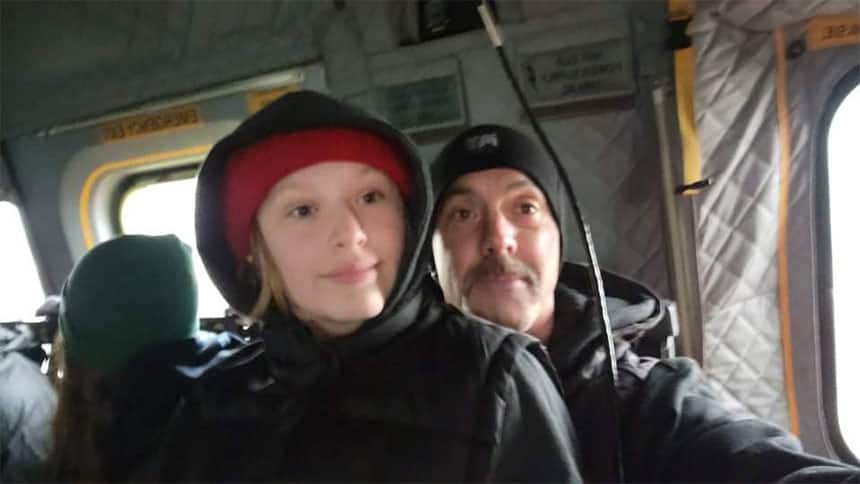 Payton and her dad in the helicopter. (Image submitted by Mike Stronach)

Payton and her family spent several days with her grandparents in Chilliwack before the roads reopened and they could go home.

Nikola and her mom were dropped off in Chilliwack by a volunteer and a friend picked them up.

Since then, both families have been able to get their cars back.

How to stay safe in your car

Both Payton and Nikola had some of the right things in their cars to help keep them safe and hydrated, like scissors, knives and water bottles.

And Nikola had a back-up battery for a cell phone.

The Government of Canada recommends people have the following items in their cars in case of an emergency: 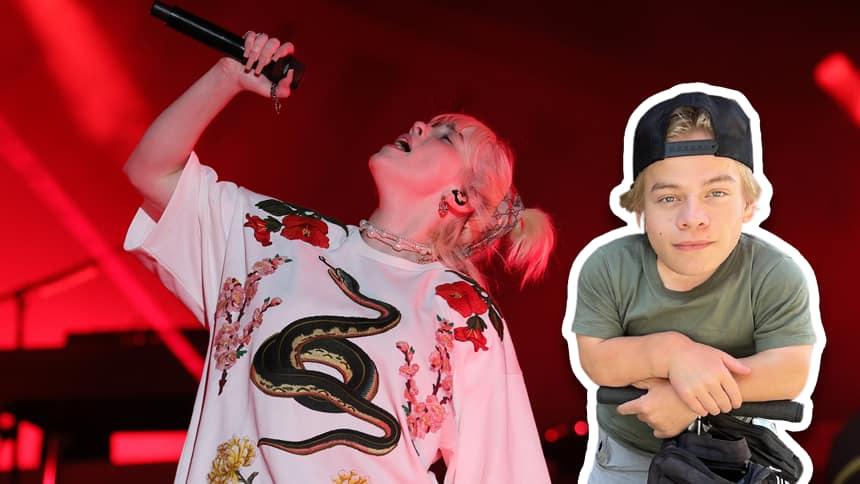 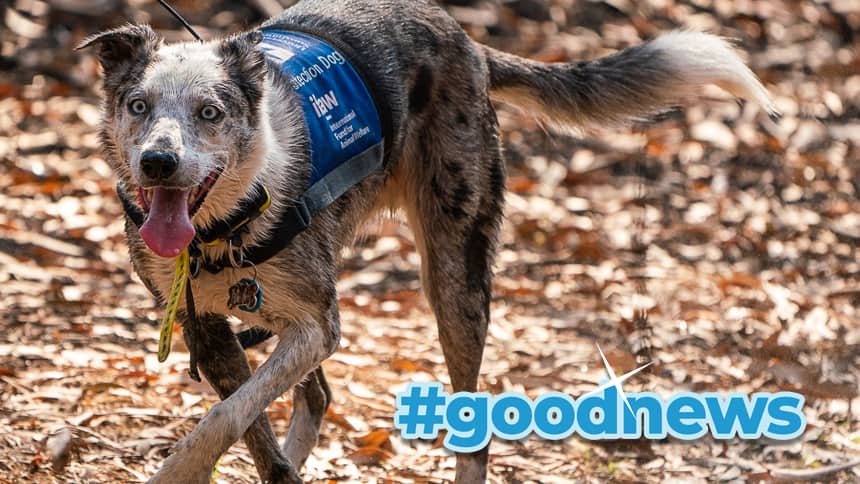