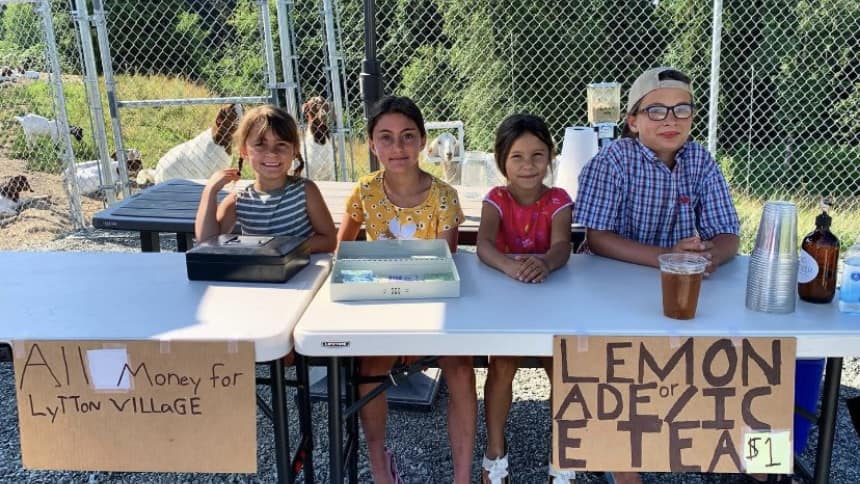 From left: Hazel, Bailey, Mikaela and Jacob Krause, with their lemonade and iced tea stand. (Image submitted by Pamela Krause)

Jacob Krause, 10, from Cache Creek, British Columbia, had big plans for a lemonade and iced tea stand this summer.

He had bought the lemonade mix with his mom and was ready to set up shop to make some cash.

Then he saw the news about Lytton, B.C., and realized there were people nearby who needed help.

All of them agreed and helped him run the stand.

On June 30, the small town of Lytton was destroyed by fire. Residents didn’t have long to gather their belongings before fleeing the flames.

“Lytton was such a tragedy and a sombre reminder of what we're facing with climate change.” — Carly Phillips, wildfire and carbon researcher

Many fled to surrounding towns, including Cache Creek, where Jacob and his family live. 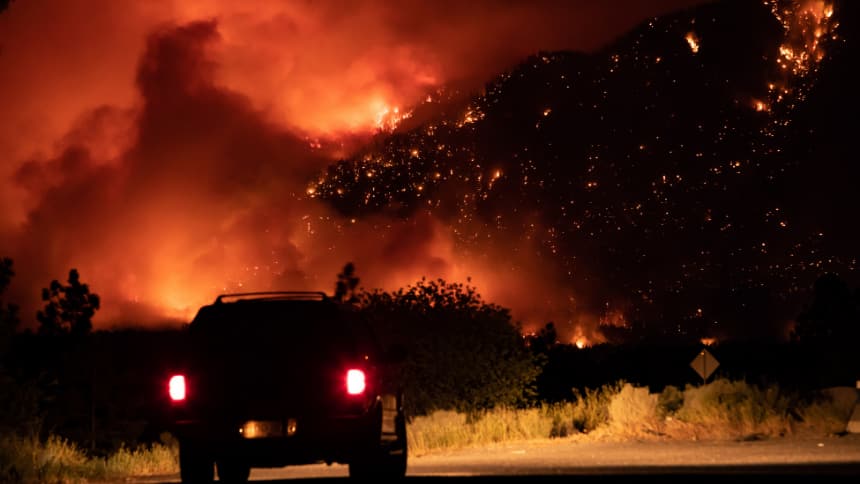 A car is parked as fire comes down a hill in Lytton, B.C. (Image credit: Darryl Dyck/The Canadian Press)

The four kids — Jacob, Bailey, 8, Mikaela, 6, and Hazel, 5 — set up outside of their grandmother’s fabric shop.

Serving up cold iced tea and lemonade, the group raised exactly $917.95, and they are looking forward to donating the money to a family affected by the fire.

While Jacob admits there was no special ingredient in his lemonade, he was amazed and excited at how generous the community was.

The lemonade was priced at $1 a cup, but Jacob said “some people were giving us like a hundred dollars. Fifty dollars. Twenty dollars and tens too.”

What happened in Lytton?

With dry conditions and hot summer days, it’s not uncommon to see wildfires in Western Canada.

In British Columbia, for example, more than 200 active wildfires are currently burning. Officials are making sure people are staying safe and being evacuated from their homes if needed. 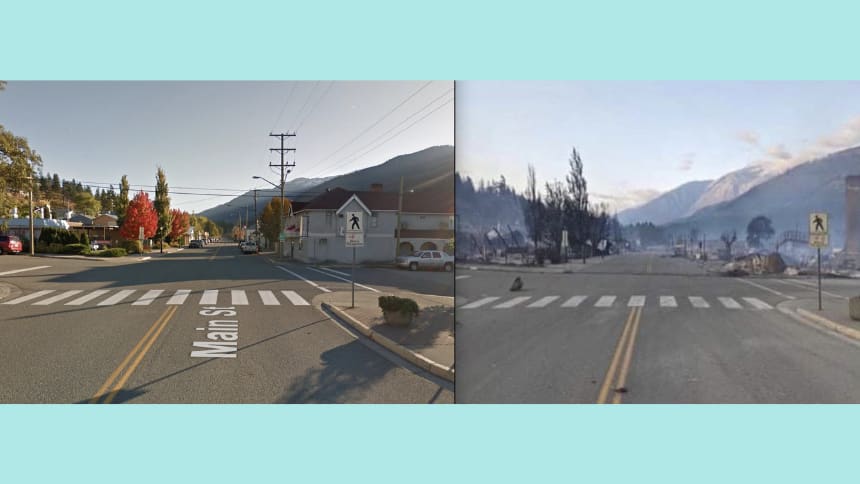 Images of Lytton’s main street before and after the fire. (Image credit: Justin McElroy/Twitter)

In Lytton, which is a town about 150 kilometres northeast of Vancouver, most homes and buildings did not survive the fire. Several residents were injured and two people died.

The fire came days after a record-breaking heat wave.

Lytton broke a record for the hottest place in Canada ever on June 29, with a recorded temperature of 49.6 C.

Is climate change to blame?

The exact cause of the fire in Lytton is still unknown and under investigation.

The BC Wildfire Service says it might have been caused by human activity.

Extremely high temperatures in the area made the surrounding brush, trees and environment dry, and those conditions often make fires more common or easier to spread. 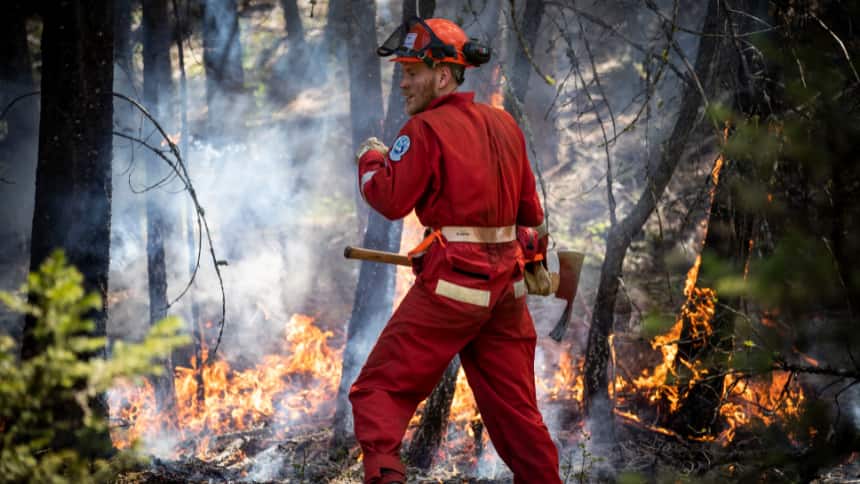 In British Columbia, firefighters practise how to fight wildfires at boot camps. Here, a controlled fire is burning so that the firefighter can learn how to prevent and fight them. (Image credit: Ben Nelms/CBC)

With so many fires burning in British Columbia, experts are warning that extreme weather will cause more fires in the future.

Carly Phillips is a wildfire and carbon researcher at the University of Victoria in B.C.

She said more needs to be done to make sure big, uncontrolled fires don’t become the new normal.

She said climate change is going to impact the conditions of forests and that could lead to more dangerous fires if we don’t act quickly to prevent it.

“Lytton was such a tragedy and a sombre reminder of what we're facing with climate change and how real these impacts are for people who are part of our communities and our province," she said. 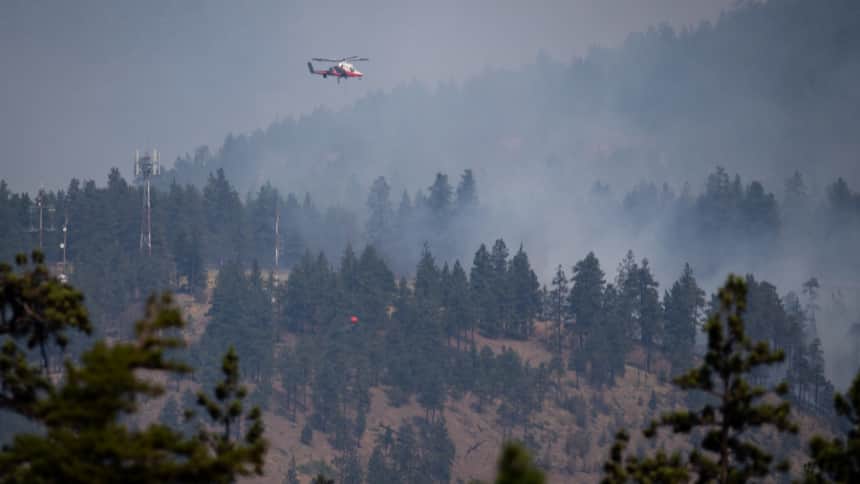 A helicopter carries water over the fire in Lytton, B.C., as it prepares to drop it over the flames. (Image credit: Darryl Dyck/The Canadian Press)

Phillips wants more preparation ahead of time, instead of just responding after a fire already happens.

“There's no quick fix, there's no vaccine [for climate change] here, but now we have to deal with the emergency that’s in front of us,” he told CBC’s Cross Country Checkup.

How can you prepare for an emergency?

In times of emergency, it is easy to become scared and not know what to do.

To stay safe, it’s important to listen to the adults and experts around you and pay close attention to the news and what local emergency services are telling you.

Can we always prevent fires from happening and destroying homes, businesses and wildlife?

But there are things that can help, like building more fireproof homes, away from lots of vegetation. Keeping your roof and yard clear of dry debris also helps. 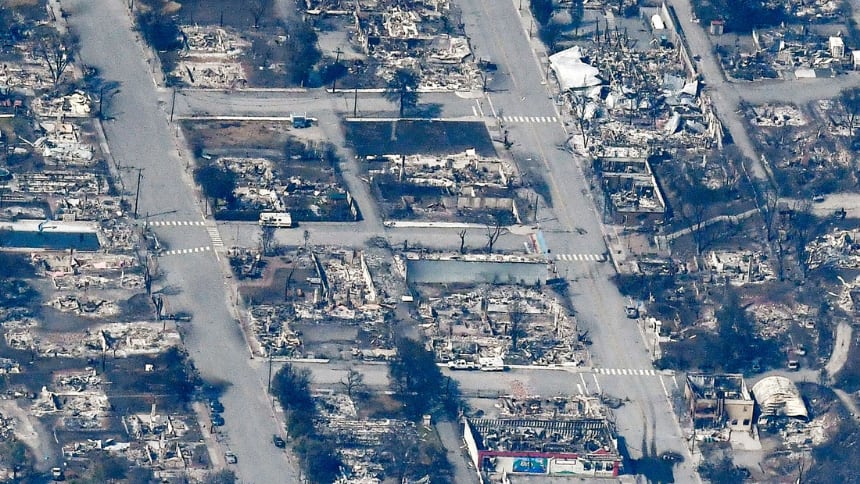 An aerial view of Lytton, B.C., after the fire that devastated the town. (Image credit: Jennifer Gauthier/Reuters)

Controlled burns, where dry brush is cleared in a safe environment, can prevent larger fires.

“Wildfire is going to be a natural occurrence that communities all across Canada will have to deal with in most cases,” Johnston said. “It's about learning how to become resilient and adaptive.”

How are people helping?

Jacob Krause and his family want to continue to fundraise for Lytton.

They are currently planning another fundraiser in support of the community, but haven’t settled on just one idea quite yet.

For other Canadian kids wanting to help, Jacob encourages all people to look for ways to raise money.

“If they want to help, then they should find a whole bunch of different ways to make money. Donate it to Lytton,” he said. 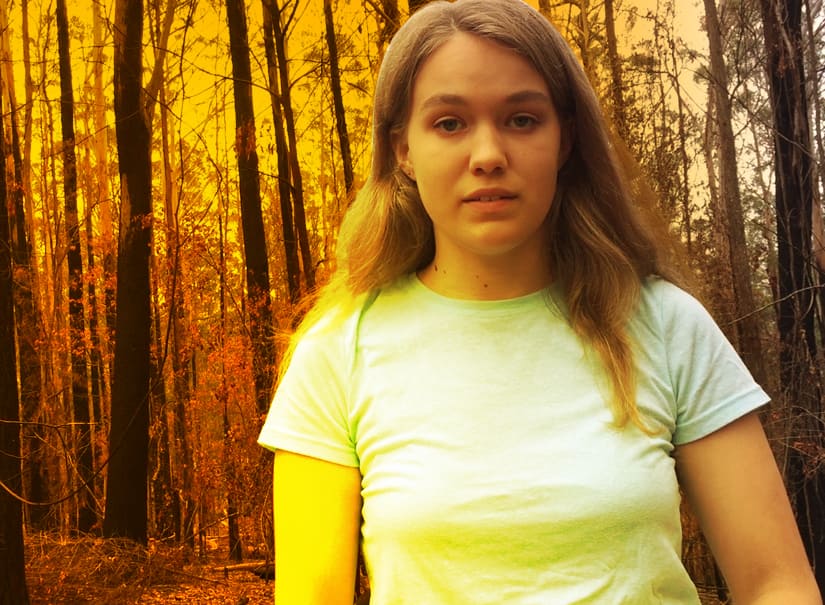