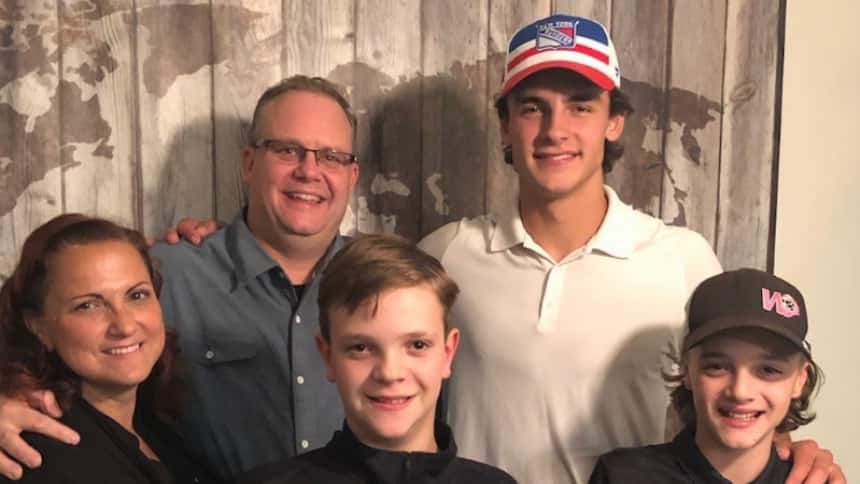 From left, Michelle Wallin, Chad Wallin and their two sons Zander and Sawyer are a billet family for Braden Schneider, who was drafted to the New York Rangers in 2020. Zander’s billet brother was a big motivation behind him learning to skate. (Image submitted by Chad Wallin)

That’s what 12-year-old Zander Wallin from Brandon, Manitoba, said on Christmas morning as his family tearfully watched him open up his first pair of skates, custom-fitted just for him.

Zander, who was diagnosed with cerebral palsy (CP) at 18 months old, has been a hockey superfan his whole life, but has never been able to skate because of mobility issues caused by CP.

Until now. Thanks to his dad pulling some strings, Zander got to fulfil a life-long dream this past holiday season.

“Ever since I’ve seen my brother skate, I’ve said, oh Dad, I want to play hockey. And now I can skate and can play with him, and I’m happy.” - Zander Wallin, age 12

As far back as he can remember, Zander and his twin brother Sawyer have been hockey fans, particularly for their local team, the Brandon Wheat Kings. 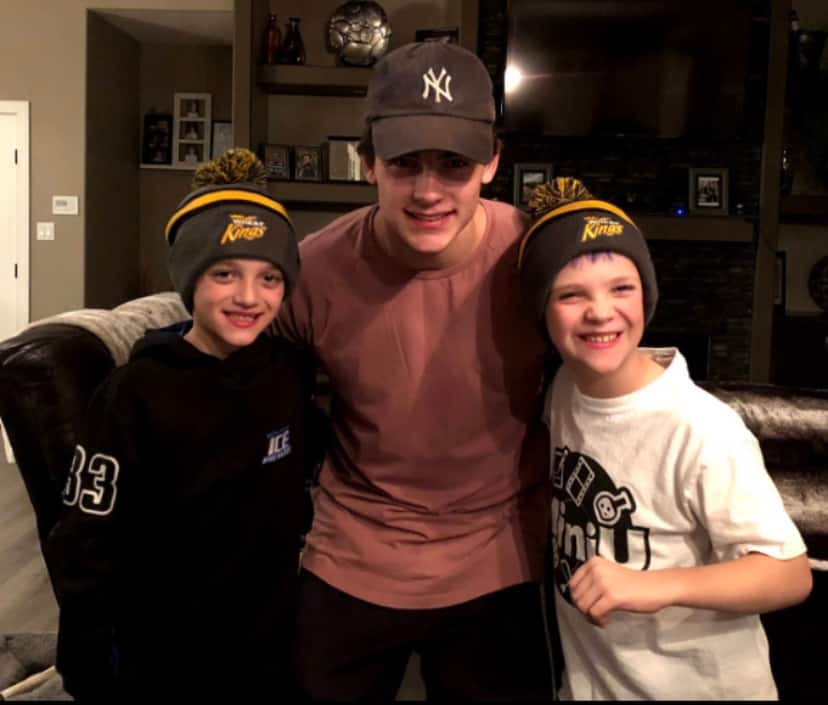 His family has also been a billet family — they invite junior hockey players to live with them throughout the season while they’re playing in Brandon, away from home.

For the past three years, world junior defenceman Braden Schneider, who was chosen 19th overall in the 2020 NHL draft, has been living with them.

Over that time, they’ve all become quite close. It was Braden who taught Zander how to perfect his slapshot.

Skating, on the other hand, has always been out of reach for Zander because of his mobility issues.

But because of the pandemic, Zander’s dad finally had time this year to make their first outdoor rink in the backyard.

When Zander saw his twin brother skate on it, he decided to set a goal for himself.

Although he didn’t know how he’d do it, he told his dad that he’d learn to skate before his billet brother returned to live with them again so that they could finally skate together. 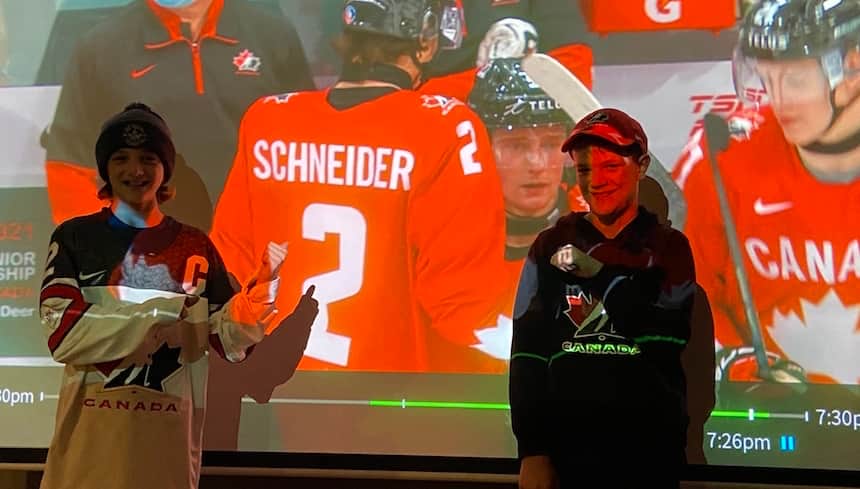 Zander, right, is known as the broadcaster in his family because of his knack for narrating games. He can name almost every NHL player and their number. (Image submitted by Chad Wallin)

That’s when his dad came up with an idea.

Getting Zander on the ice

In early December, Zander’s dad Chad Wallin asked his friend, who is the equipment manager for the Wheat Kings, to help him build a skate that was custom-fitted to Zander’s feet.

“We drew up a little plan, spent a few hours working together, trying to get it right, and came up with this redneck bob skate that seemed like it could work,” said Wallin. 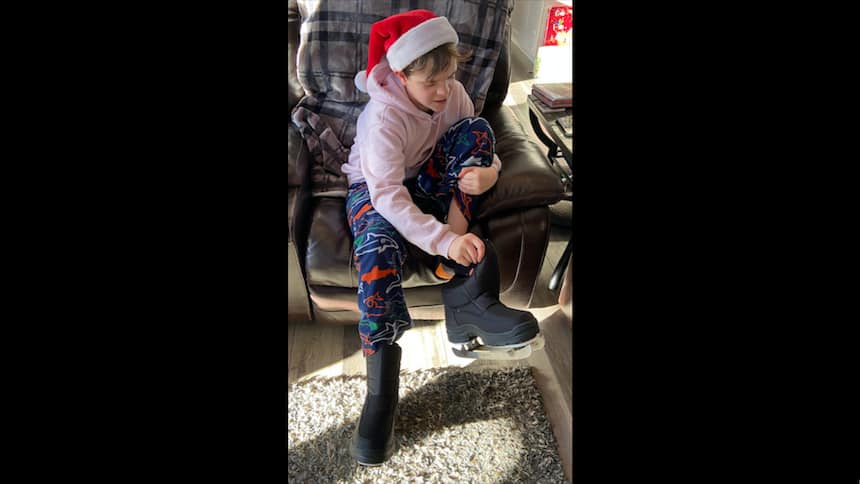 Zander was thrilled to open up the skates on Christmas morning and wanted to hit the ice right away on their homemade rink.

"In Zander’s mind, he thought he’d step on the ice and be doing laps,” said his dad. “It wasn’t a great experience, he was disappointed, I was disappointed and tears were shed.”

But Zander was determined.

“I thought if my brother could skate, why can’t I?”

A few days later, Zander and his dad hit the ice again, this time with a new-found confidence.

“The difference from two days previous was remarkable,” his dad said. “He had no practice, he just wanted to put his mind to it.”

Zander said once he was skating and off on his way, he was overcome with emotion.

“I was scared, happy and shocked, all at the same time.”

Naturally, the first person Zander’s dad sent the video to was his billet brother Braden, while he was away playing for Team Canada against Russia in the semi-final of the world junior hockey championship.

“Braden was super excited. I think it brought a little spark to his day and he had a great game that night,” said Zander’s dad.

In a Jan. 4 interview with TSN, Braden was asked about his reaction to the video.

“I couldn’t be more happy for him … it’s inspirational for everyone, but especially for me.” 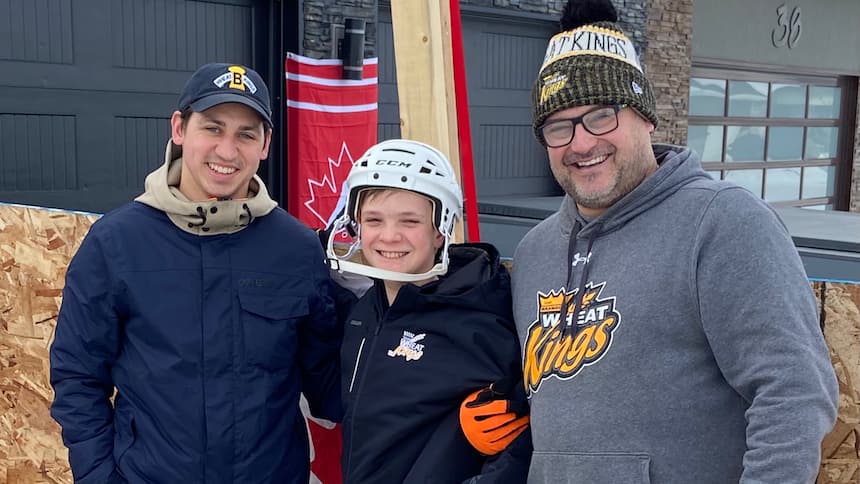 Scott Hlady, right, who made Zander’s skates, and Will Sadonikcarriere, Zander’s athletic therapist were a big part of getting Zander on the ice. (Image submitted by Chad Wallin)

As for Zander? He’s thrilled that he can finally join his twin on the ice.

“Ever since I’ve seen my brother skate, I’ve said, oh Dad I want to play hockey, and now I can skate and can play with him, and I’m happy.”

Although Zander needs a little more practice before picking up the hockey stick, he’s already got his sights set on another dream.

“I’ve always wanted to play in the NHL or be on my own hockey team.” 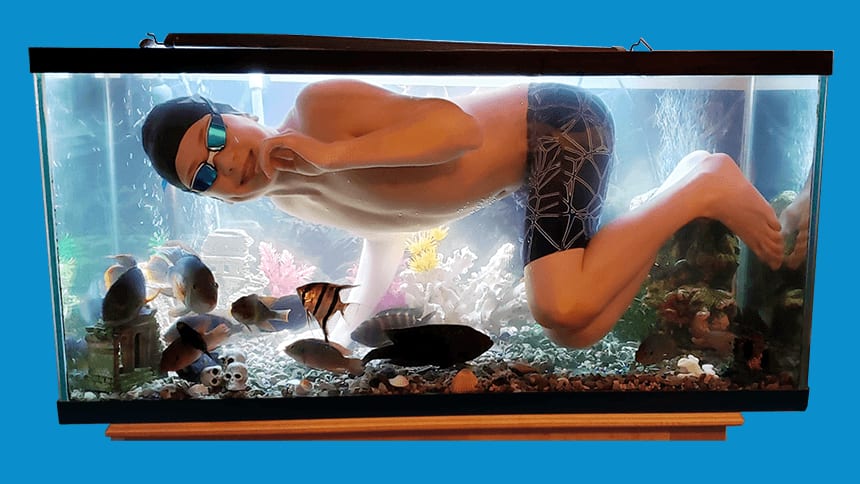