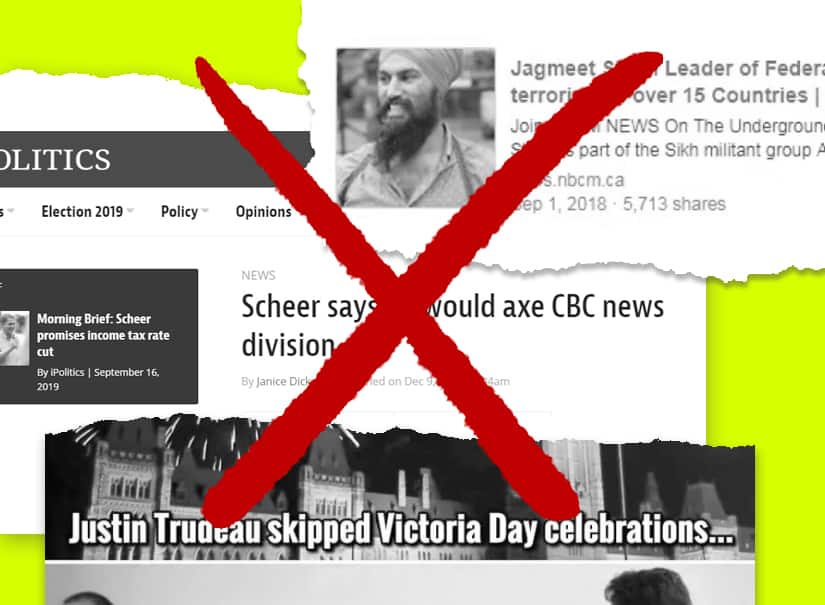 Is this fake or real? Tips on how to spot fake election news

You’ve heard the saying “fake news” tossed around in the media, on social platforms and the web.

It’s been used to describe all sorts of things, from conspiracy theories to political spin.

Fake news, also known as disinformation, is often circulating around us.

Politicians have even used the term to damage the reputations of media outlets they don’t like.

Now that the race to elect the next prime minister is underway, Canadians should keep a sharp eye out for what’s real and what’s not.

People on all sides of the political divide will be blasting information to influence public opinion and the vote.

So it’s important to keep in mind that some of what you’re seeing might not be true.

Why care if you’re not old enough to vote?

What you learn now will help you make informed decisions when you are old enough to vote.

Plus, fake news is everywhere, not just in politics.

Knowing how to detect it affects everything you read or hear.

How can we tell the difference between what’s fact or fiction?

Misinformation is when a person or group shares information without realizing it’s not true.

Both can show up in a number of ways.

A good example would be the use of memes.

Memes can include a false quote or made-up fact pasted on an image, and since memes are easy to share online, it can be spread quickly.

Because memes are not linked to any sources, they can’t be fact-checked, making it easy to use to fool people into believing they're true.

A meme that circulated online earlier this year claimed Prime Minister Justin Trudeau spent Victoria Day at a mosque. In reality, the image used of Trudeau was captured at an Eid al-Adha celebration in September 2016.

Eid al-Adha is celebrated in Muslim communities throughout Canada around the 10th to the 13th days of the final month of the Islamic calendar. 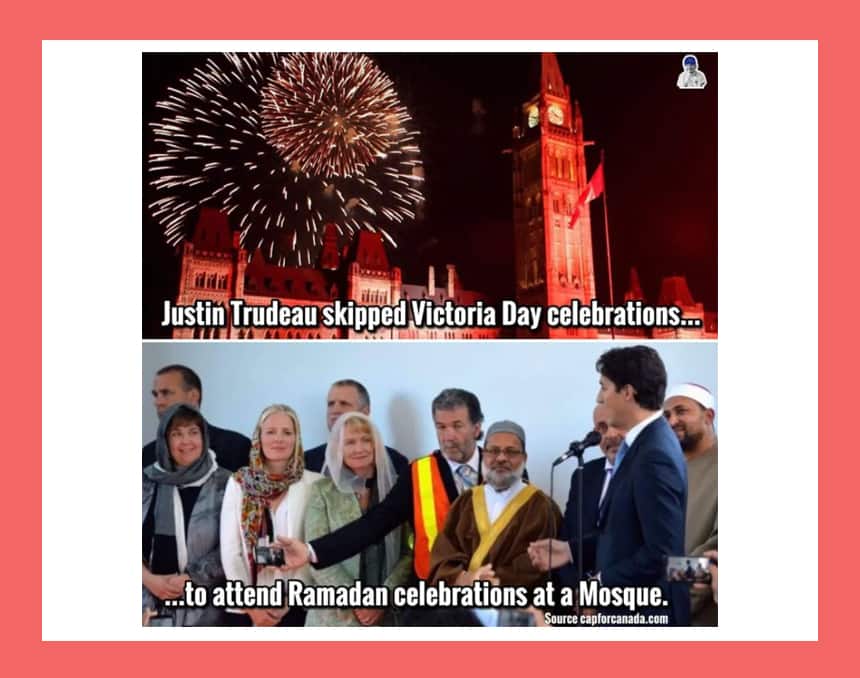 This meme used an image of Justin Trudeau attending Eid al-Adha, an annual Muslim celebration, in September 2016 to spread false information about the prime minster visiting a mosque on Victoria Day of this year. (Facebook)

The purpose of the fake meme was to create the impression that Trudeau favours Muslim Canadians over other Canadians, which is not true.

This in turn could sway those who are anti-Muslim to stop supporting Trudeau and the Liberal Party.

Old stories being shared online like they are new

Another way to spread falsehoods is to share information out of context, causing people to misunderstand its meaning.

For example, sharing old news stories as if they're new.

The comment was made before Scheer was elected leader of the Conservatives.

Despite that, it was shared by multiple Facebook groups as recently as May of this year.

Without noting the original date of the story when shared, it gave the appearance that Scheer made the comment recently, making it seem like it’s part of his election platform. 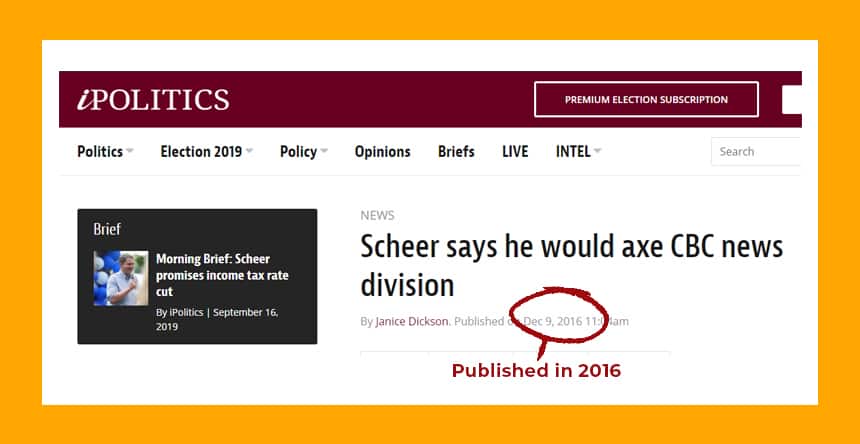 Even though this iPolitics story is three years old, it was re-posted and shared many times without mention of the original publishing date, which made an old story seem like it was new. (iPolitics)

Be wary of fake thumbnails

A fake news article, posted on Sept. 2, that accused Jagmeet Singh of being wanted for terrorism in 15 countries, was shared more than 5,000 times online.

It was posted on an obscure blog called NBCM News.

The article itself isn’t real.

Apart from the title, photo and the first line of the text, the body of the false story was cut and pasted from the Wikipedia article on the 1985 Air India bombing.

Something else to look out for are videos posted online that are edited in a way that leaves out important details.

On Sept. 5, just days before the election was called, Canada Proud, a group that supports conservative politicians, posted a video on their Facebook page that was edited to look like Trudeau bought favourable coverage from journalists.

The video was altered so that it ended at a point that made it seem like Trudeau was admitting to a bribe, when, in fact, the rest of his comment was cut out.

He was actually making a joke about the accusations.

Here’s the original unedited video so you can see the difference.

Justin Trudeau speaking at the Parliamentary Press Gallery Dinner at the Canadian Museum of History on May 4, 2019.(CBC)

Stephane Perault, Canada’s chief electoral officer, says there’s not much Elections Canada can do to stop fake news circulating about a candidate in the middle of an election.

That means it’s up to us to be extra careful in keeping an eye out for what’s fact or fiction.