Five Indigenous teens you should know

Across Canada, these Indigenous youth share their successes, goals and inspirations

A whole new generation is finding ways to make a difference in their communities and beyond.

That generation consists largely of Indigenous youth, who are the fastest growing population in Canada, according to Statistics Canada.

Across the country, these Indigenous teens are responsible for a resurgence of language, tradition and hope in their communities.

At 13, Miyawata knows what she wants — to advocate for justice and to inspire others.

From organizing climate strikes to dancing at powwows, she is using her voice to fight for issues that matter to her.

“I'm very visible about my identity in school. I wear ribbon skirts, I wear beadwork, I wear my regalia,” she said.

Miyawata is proud to be a Plains Cree from Treaty 6. She looks to young activists like Greta Thunberg and Autumn Peltier for inspiration, but even more so, she takes strength from her grandmother, who survived residential school.

“She's raising me to be very proud of who I am and she reminds me a lot of the time that I come from strong people,” she said.

Miyawata is planning a climate strike, but also wants to focus her efforts on fighting racial inequality and supporting the Black Lives Matter movement. 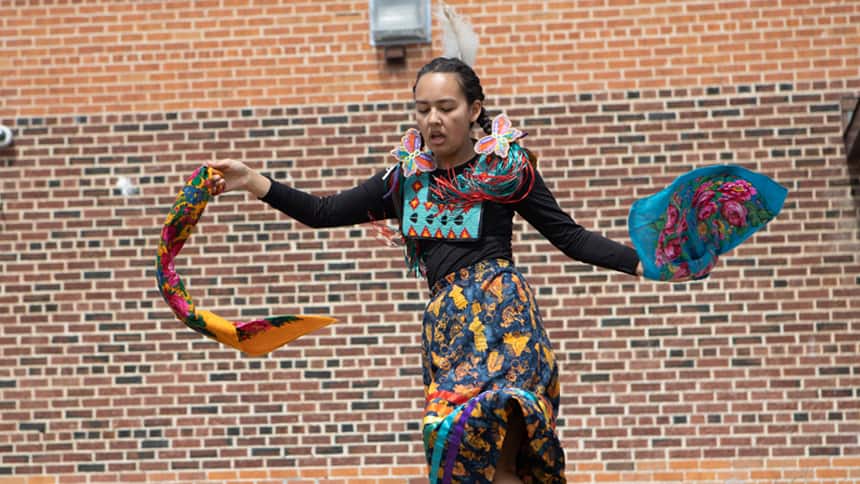 Miyawata Dion Stout is also a talented fancy shawl and jingle dress dancer. ‘I love dancing so much. It's just like pure joy. I can’t even explain how much joy I feel when I put my regalia on.’ (Meghan Mast/CBC)

“You can't have climate justice without racial justice. It goes hand in hand,” she said.

“It's a big moment in history and my kids are going to ask me what did you do when this was happening?”

Bet you haven’t seen the viral dance to Drake’s Toosie Slide performed like this.

Or, seen a cooler version of the #WipeItDown challenge.

You might recognize Larissa Munch for her TikToks, which have been liked more than one  million times.

Like many Indigenous teens, she’s using the platform to highlight her culture and teach others about her traditions, including her detailed regalia.

Larissa is Dakelh (Carrier) and Nehiyaw (Cree) from Nazko First Nation in B.C. 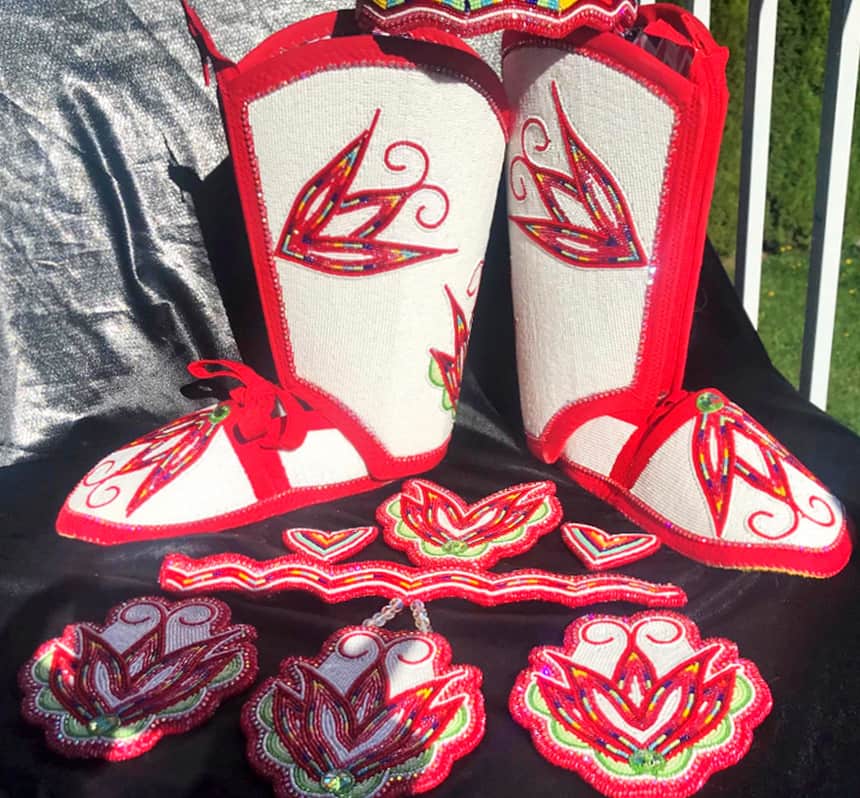 Some of Larissa Munch’s regalia was made by artist Mary Archie. While isolating, Larissa has also been practicing her own beadwork. (Submitted by Larissa Munch)

Larissa joined TikTok as a way to “share my own knowledge and educate people about dancing,” she said.

But going to cultural gatherings is also a great way to share traditions. 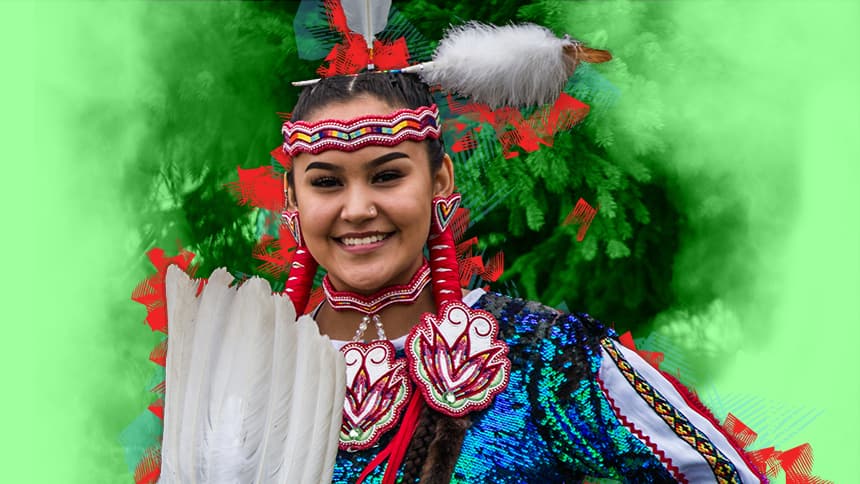 “I want to tell the youth to stay involved with their culture, and to learn their language. I started learning my Carrier language when I was 13. It’s never too late to learn! I would also tell them to dance or participate in powwows,” she said to CBC Kids News.

Nicholas Flowers loves spending time on the land as a way to encourage environmental stewardship.

Nicholas has been practising traditional Inuit ways from a young age with his sisters, such as hunting, fishing and berry picking.

Visiting the land “has always been an important aspect of our traditional culture … to give respect and learn the traditional ways of our Inuit ancestors,” he said. 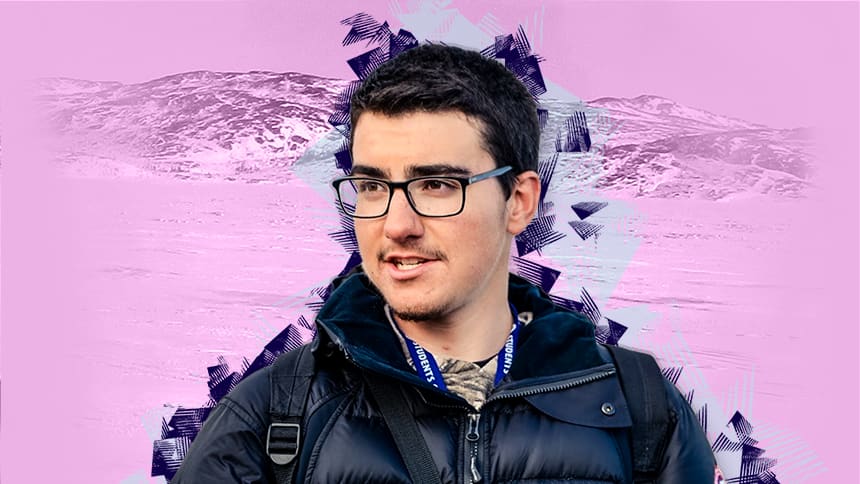 Nicholas is an advocate for his Inuit culture, sharing their respect for the land and animals that inhabit it, especially seals.

He fondly remembers practising his sewing and making skills with his grandmother, Andrea Flowers, who was a seamstress and cultural steward.

Her recent passing has reminded Nicholas of the importance of elders. 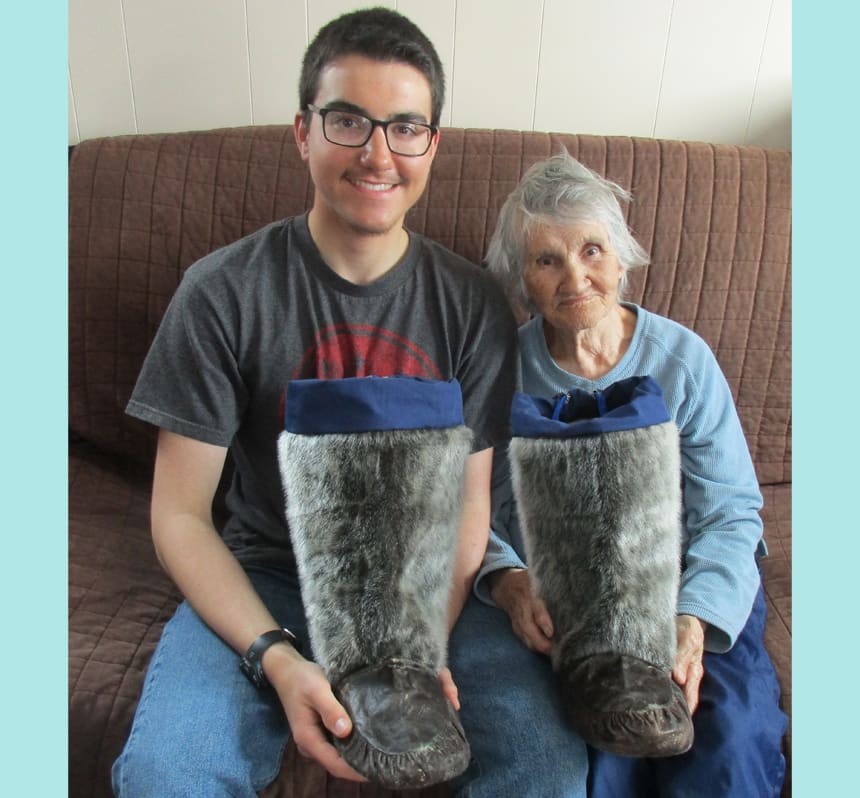 Nicholas’s love for his community extends beyond the land and into his recent love of learning his traditional language, Inuttitut.

“It is our role as the future generation to learn the language because I know that our grandparents and great-grandparents could speak Inuttitut fluently and now knowing that our Elders are slowly passing away… the language we must pick it up,” he said.

In quarantine, Flowers has been practising how to make a variety of salmon nets and kayaking when he can.

Proud of his traditional ways, grateful to his community and hopeful for what’s next, Nicholas is studying environmental science at Memorial University this fall.

He recently received a major scholarship from Ingenium, Canada’s Museum of Science and Innovation.

Averi Doxtator came up with a clever way to honour Indigenous graduates, all while at distance.

The Haudenosaunee (Oneida), Anishinaabe from Walpole Island First Nation and Dakota from Sioux Valley student just graduated and didn’t want fellow students to miss out on the celebration.

Inspired by Barack and Michelle Obama's commencement speech for the class of 2020, she started the hashtag #IndigenousGrad2020 and posted her own graduation photo, and it quickly took off. 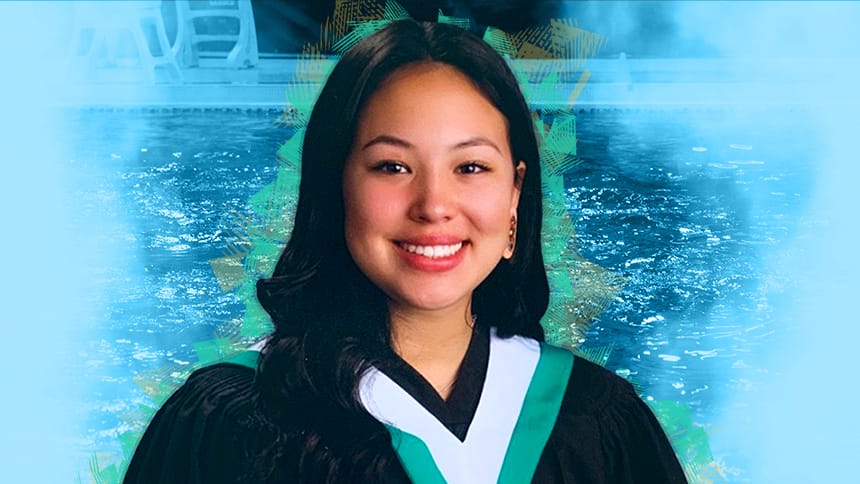 “I can't believe this. I surely didn't think it was going to get this big and there's like hundreds of posts that people just keep spreading the awareness,” Averi said to CBC Kids News.

Awareness that Indigenous people need to be respected, especially for their success and resilience.

“Resiliency means breaking barriers and pushing through to empower yourself and empower others. As Indigenous peoples we are resilient, together we have overcome,” she said.

Each day, more and more graduation posts roll in.

Averi looks at the success of #IndigenousGrad2020 as fuel for her dreams, like one day attending the Pan Am Games.

Her message to other youth?

“You don't know the power that you have to influence somebody else's life….I never thought that this project would be what it is today,” she said.

“I think if I can do that from my home in quarantine, then we can take on the world.”

Averi will take on a new adventure in the fall when she will be attending the University of Toronto, and playing varsity water polo. 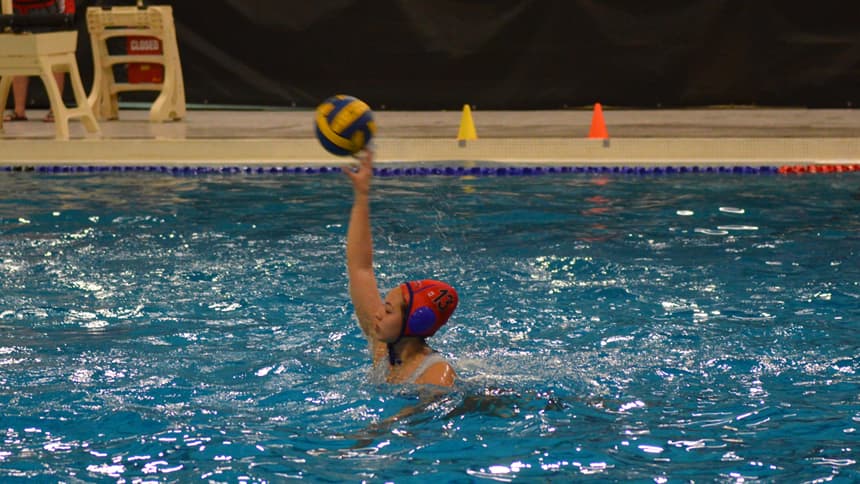 Aaron Flunki-Mantla’s success stands out in his small school.

This year, he is the only high school graduate of his community at Ndilo's K'alemi Dene School.

For Aaron, his success is thanks to the support he received from friends and family.

“I'm really glad I had the support I needed to get through school, to kick me out of bed,” he said.

“Sometimes I’d feel like giving up. But you also learn by having great accidents and making the most of it. You have to have a great attitude and people will help you,” he said to CBC Kids News. 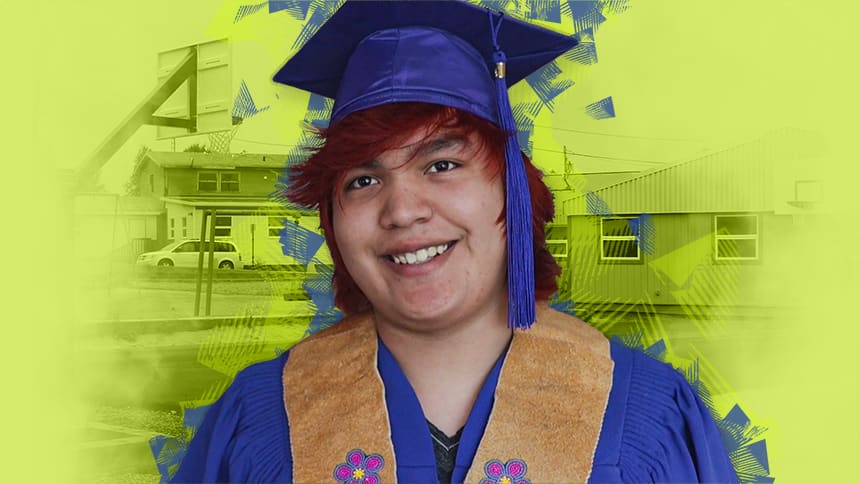 Aaron may have just graduated, but he’s already working in the community to train as a carpenter, a career he loves.

“I was a crafty child, always building. I love to destroy or dismantle old homes and make it new. At the end of my work, I feel proud of what I accomplished.”

As a thank you to his school, Aaron wants to return one day to build a gym.

“I would love to see what’s changed when I’m gone, but also come back to make a change,” he said.

His advice to other teens in Canada is to follow your passions, set goals and don’t stop improving yourself: “Become a better person than you once were by staying strong and helping others.”

Want to read more about Indigenous youth making a difference? 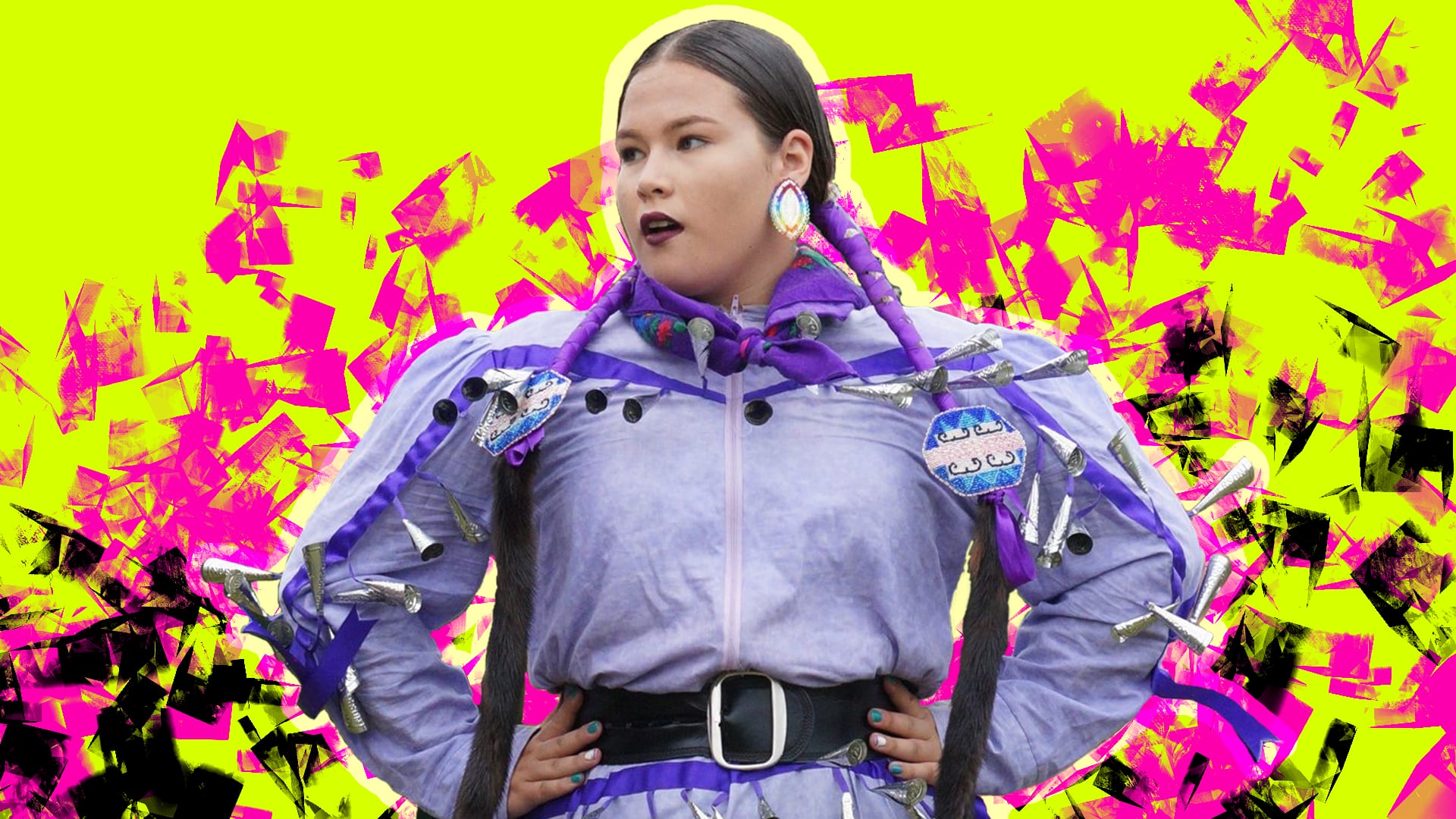