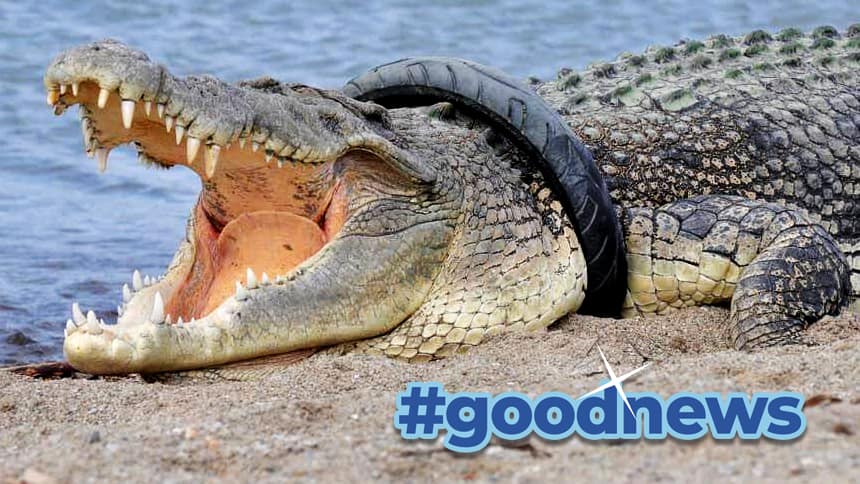 Past attempts were never successful

You asked for more good news on CBCKidsNews.ca and we delivered. We hope this makes you smile today! Is there a #goodnews story you think we should be covering? Email cbckidsnews@cbc.ca.

A crocodile in Indonesia that had a motorcycle tire stuck around its neck for six years has had a huge weight lifted from its shoulders.

The croc was set free by a 35-year-old animal lover named Tili, in the city of Palu on the island of Sulawesi on Feb. 7. Like many Indonesians, Tili uses only one name.

“I just can't stand to see animals hurt. Even snakes, I will help,” said Tili, whose wildlife expertise is self-taught.

His efforts are being celebrated by locals — and those who had attempted previous rescues —  as it was thought the crocodile would eventually suffocate and die as it grew larger.

It isn’t clear how the crocodile, which at four metres is the length of a standard car, originally got the tire stuck around its neck.

Wildlife wranglers from all over the world had tried to free the crocodile after it was first spotted in 2016.

In 2020, local conservation officials even offered an unspecified reward for anyone who could free the croc. 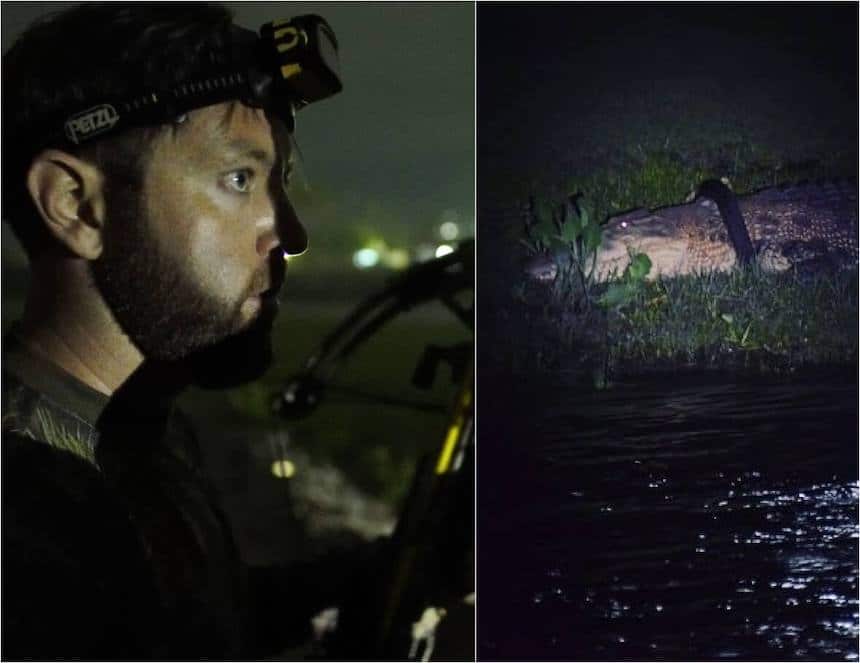 Forrest Galante is one of a handful of people who have tried to save the crocodile in the past. (Image credit: Forrest Galante/Facebook)

Gallante told CBC that he and his crew spotted the crocodile shortly after landing in Palu, but were forced to leave the island because of the pandemic.

They never got the chance to attempt a rescue.

“We sat there and watched this croc from about 15 feet away for close to an hour before he lazily slinked back into the river. And I was like, ‘Oh my god, I'll never get another opportunity like that.’”

Gallante was one of many who cheered along while watching a live stream of Tili’s rescue effort.

Tili to the rescue

Tili set up a basic trap with a rope tied to a log, using chicken and ducks as bait for the crocodile. 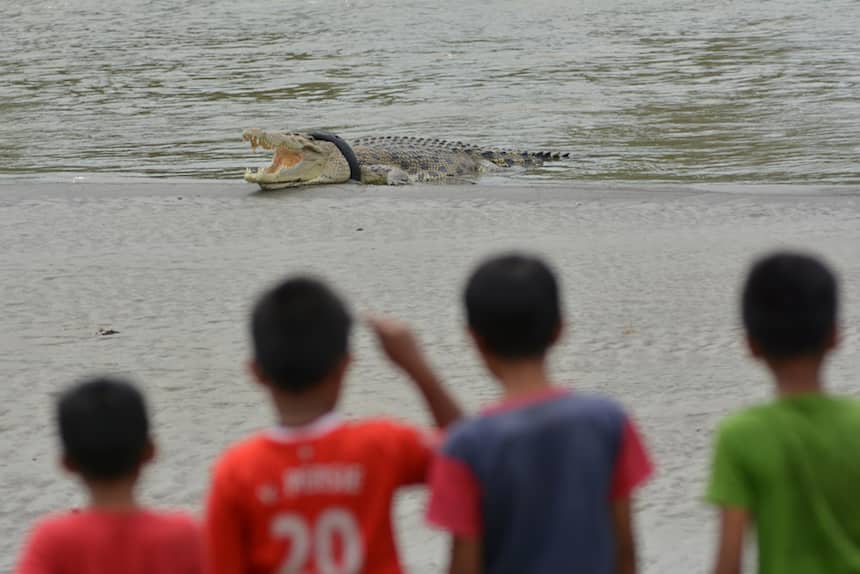 The crocodile, pictured here in 2016, had been dragging the tire around on its neck for years. (Image credit: Antara Foto/Basri Marzuki/Reuters)

He tracked the reptile for three weeks, but the crocodile escaped the trap on two separate occasions before finally being captured.

Once caught, Tili and his friends tied up the crocodile by binding its legs, tail and jaw, then used a hacksaw to remove the tire.

“Many people were skeptical about me and thought I was not serious” about capturing the crocodile, said Tili through a translator.

Well, he certainly proved them wrong. And he likely saved the animal’s life in the process. 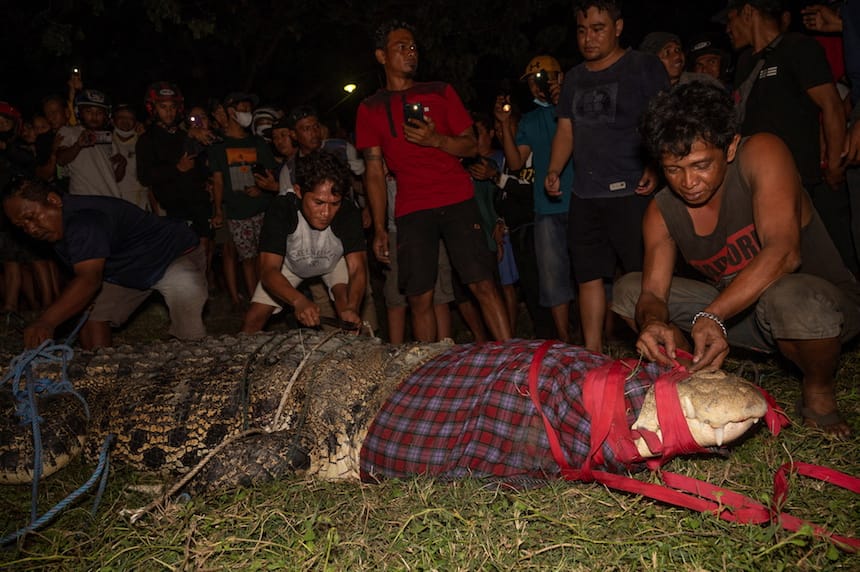 Tili, right, spent weeks trying to free the crocodile. Once the croc was set free, witnesses said it just slid back into the river, seemingly unbothered, as if it didn’t just have a crazy experience. (Image credit: Antara Foto/Basri Marzuki/Reuters)

The stakes were high

Galante said the crocodile would probably have died if the tire hadn’t been removed.

Eventually “he would have gotten so big that the tire would have begun to asphyxiate him and restrict him taking food in,” he said.

Of course, even though Tili calls himself a self-taught animal expert, don’t try this one at home.

In Canada, organizations like the Society for the Prevention of Cruelty to Animals (SPCA) have trained experts on staff who can help animals who are caught in dangerous situations.

With files from Reuters and CBC Radio’s As It Happens
TOP IMAGE CREDIT: Forrest Galante/Facebook, with graphic design by Philip Street/CBC 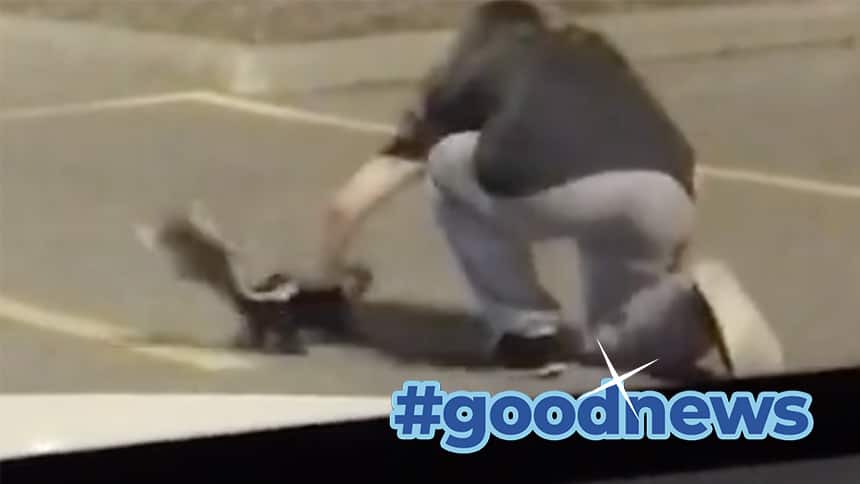