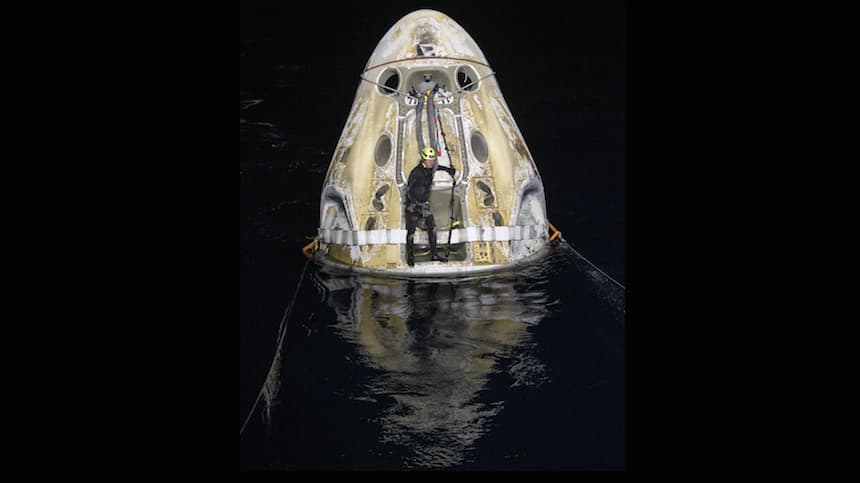 Support teams work around the SpaceX Crew Dragon Resilience spacecraft shortly after it landed in the Gulf of Mexico with four astronauts aboard. (Image credit: NASA/The Associated Press)

4 astronauts land in ocean, return safely to Earth with SpaceX

Capsule soon to be reused in first-ever private spaceflight

After six long months at the International Space Station (ISS), SpaceX safely returned four astronauts to Earth in a historic splashdown in the Atlantic Ocean.

On May 2, the SpaceX Dragon capsule parachuted into the Gulf of Mexico off the coast of Panama City, Florida, just before 3 a.m.

The flight back to Earth from the ISS took just 6 ½ hours and marks the first splashdown in the dark since the Apollo 8 moonshot in 1968.

It’s also the first time astronauts have completed a non-test mission in a spacecraft owned by a private company, marking what could be the beginning of a new era for space travel.

Retrieving the astronauts from the ocean

NASA astronauts Shannon Walker, Victor Glover and Michael Hopkins, along with Japan Aerospace Exploration Agency astronaut Soichi Noguchi, have been at the ISS since November. 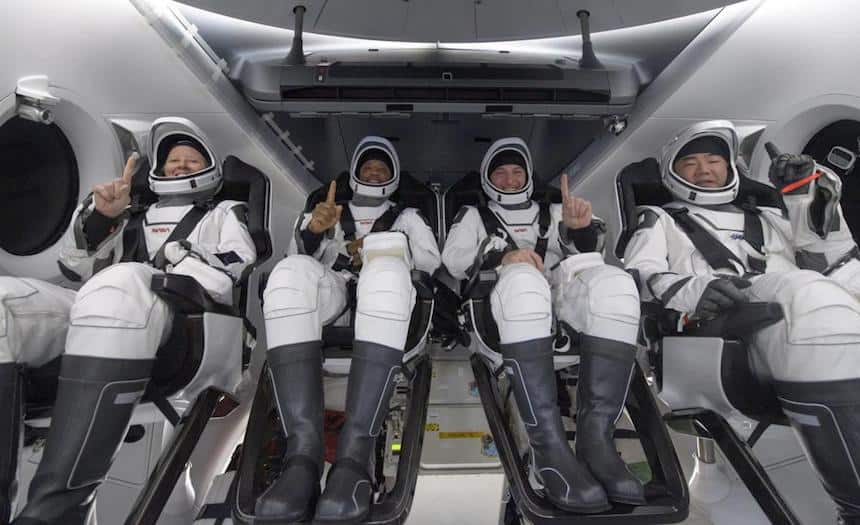 They were meant to return to Earth on April 28, but had to reschedule due to bad weather.

Instead, they decided to leave the ISS late Saturday night and began heading toward Earth’s atmosphere.

Infrared cameras tracked the astronauts’ capsule as it re-entered the atmosphere, looking like a bright star streaking through the night sky. 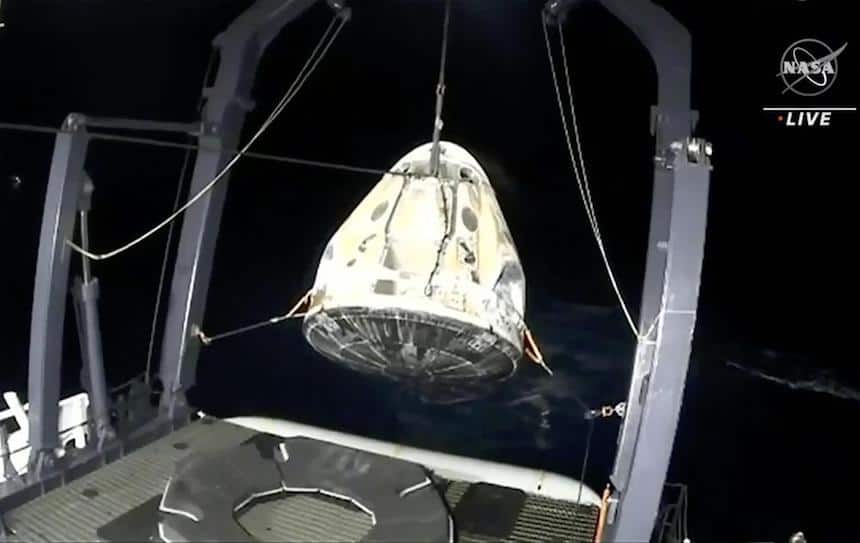 The SpaceX Dragon capsule is retrieved from the Gulf of Mexico near the Florida Panhandle early Sunday, May 2. (Image credit: NASA TV/The Associated Press)

Within a half hour of landing in the Gulf of Mexico, the capsule — resembling a giant toasted marshmallow after being charred upon re-entry into Earth’s atmosphere — was hoisted onto a recovery ship.

Hopkins was the first astronaut to emerge from the capsule and did a little dance to celebrate the safe return.

Soon after, the astronauts received medical checks from a support team and hopped on a helicopter for the short flight to shore.

Why this is a big deal 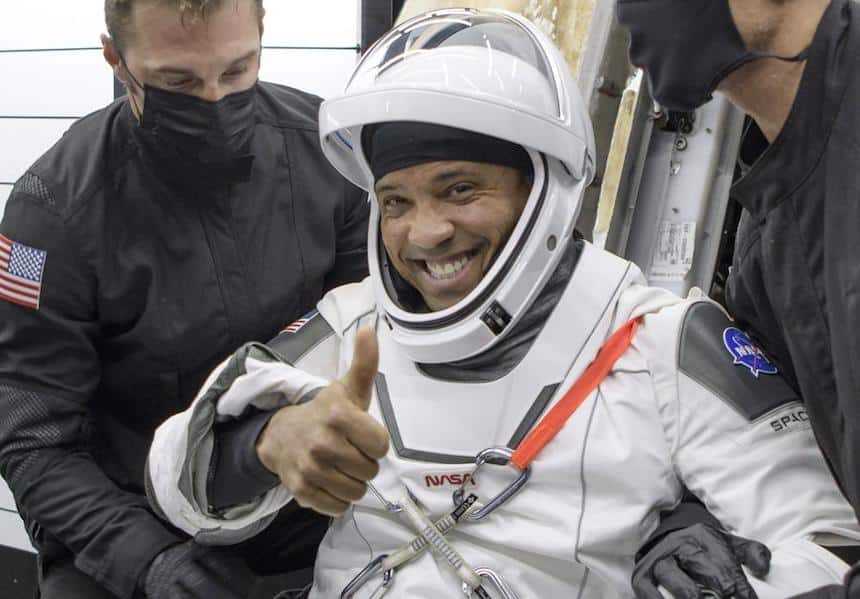 NASA astronaut Victor Glover is helped out of the Dragon capsule after splashing down in the Gulf of Mexico. (Image credit: NASA TV/The Associated Press)

In other words, this is the first time astronauts have completed a non-test mission in a spacecraft owned by a private company rather than a government.

This is significant because it gives space agencies more opportunities to get their astronauts to space.

For the past 10 years, the Canadian and U.S. governments were forced to pay big bucks to use Russian spacecraft, after their own shuttles were retired.

The success of this mission could soon allow for space tourists — or people who aren’t trained as professional astronauts — to visit space as well.

The Resilience capsule will head back to Cape Canaveral, Florida, for repairs so that it can be used in the first-ever spaceflight for regular people in September.

A tech billionaire has purchased the entire three-day flight, which will orbit 120 kilometres above the space station.

Jared Isaacman will fly with a pair of contest winners and a physician assistant from St. Jude Children’s Research Hospital in Tennessee, which was his designated charity for the mission.

As for NASA, it plans on sending more astronauts to space via SpaceX in October. 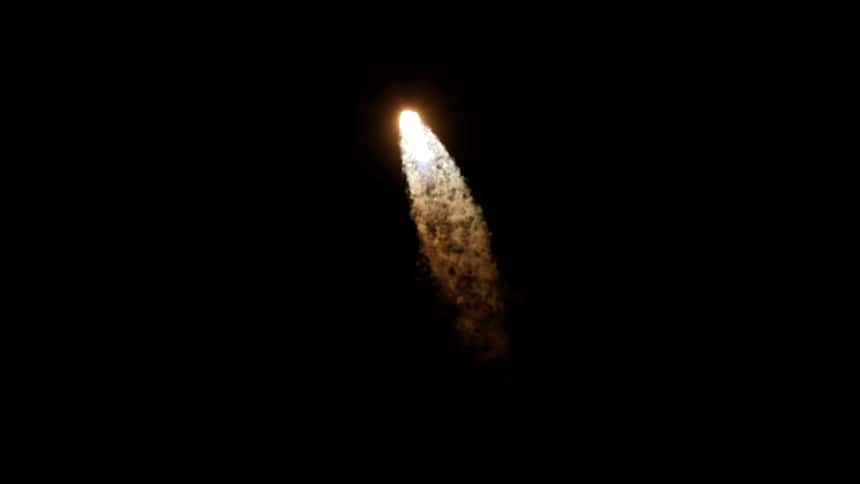 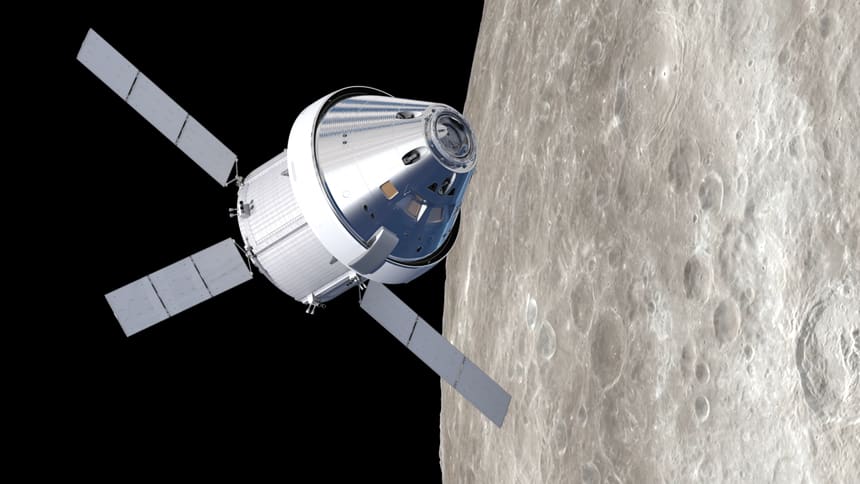