From mutton busting to saddle bronc, a look at events commonly found in youth rodeos featured in Cowboy Up. 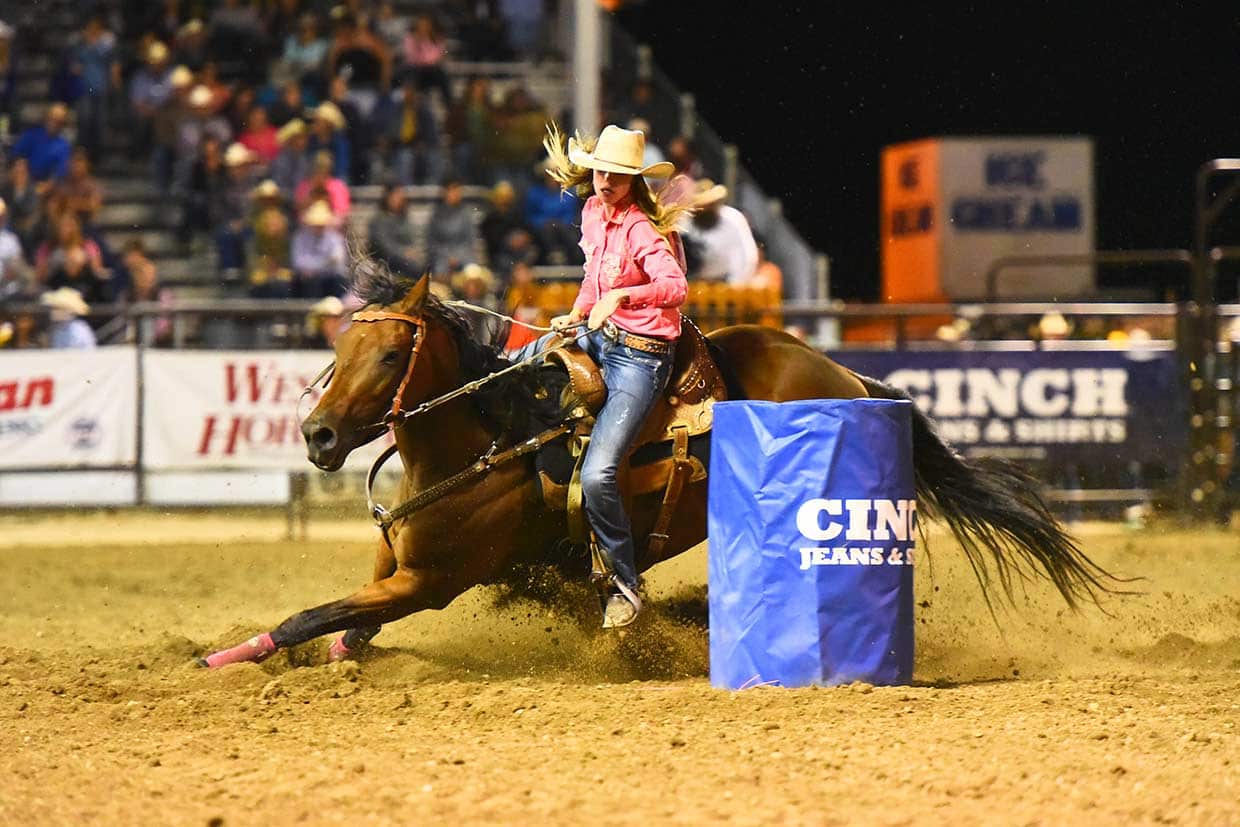 OBJECT: A horse and rider attempt to complete a cloverleaf pattern around pre-set barrels. There is a 60-second time limit to complete the course.

WINNER:  The contestant with the fastest time to complete the course without penalties. Winning is a combination of the horse’s athletic ability, the horsemanship skills of the rider and precise control.

PENALITIES: If a rider or horse hits the barrel there will be a five-second penalty. Running past a barrel or off the pattern will result in a "no time" score.

GEAR: A barrel racing saddle (with deep seats and short skirts to allow for more contact with the horse’s back), a bridle with an effective bit for guiding the horse. The horse is usually wearing sports boots to prevent serious injury.

WHO PARTICIPATES? Although both women and men can compete, barrel racing is generally an event for women.

Tylee Cooper is a fierce competitor in goat tying.

OBJECT: To race on a horse to the end of the rodeo arena where a goat is staked out on a 3-metre rope, perform a flying dismount to catch the goat and tie three of its feet together. Distance from the start to the stake is usually about 30 metres. When the goat is tied, contestants signal the end by throwing their hands up and getting off the goat. Times usually range from seven to nine seconds.

WINNER: The contestant with the fastest time without penalties. It’s all about speed and efficiency.

PENALTIES:  If the goat becomes untied during the six-second tie period or if the horse crosses the staked rope of the goat or causes it to become loose. The contestant cannot touch the string after they indicated that they are finished and they must move at least one metre away.

GEAR: A nylon or cotton rope called a ‘string’ — it can be either rope or braided.

WHO PARTICIPATES? Mostly girls in the high school and college-level rodeo. Men typically tie down calves.

OBJECT:  Known as rodeo’s classic event. A rodeo event where the participant is riding a horse (sometimes called a bronc) that attempts to throw off the rider. The event is based on the necessary horse breaking skills of a working cowboy, but now uses horses that are specially bred for their agility and bucking ability.

WINNER: Each competitor climbs onto a horse which is held in a small enclosure called a bucking chute. The rider gets ready, the gate of the chute is opened and the rider attempts to stay on the horse for 8 seconds.  The rider is scored from 1 - 50 and the horse is scored from 1-50, resulting in a final tally of 100. Scores in the 90s are considered exceptional. It’s all about finding a rhythm with the horse – and considered to be the toughest event to master.

PENALTIES: The rider must "mark the horse out" or have the heels of his boots in contact with the horse above the point of the shoulders before the horse’s front legs hit the ground. The rider cannot touch the horse with his free hand or loose a stirrup or drop the rein.

GEAR: A specialized saddle with free swinging stirrups and no horn. A simple rein is attached to a leather halter worn by the horse.

NOTE: There are concerns among animal activists that saddle bronc is cruel to animals. Flank straps that encourage the horse to kick out straighter and higher when it bucks that hurt the horse are not allowed by rodeo rules.

OBJECT:  A rodeo event for very young children where they ride sheep similar to bronc riding. A sheep is held in a small chute while the child is placed on top in a riding position.  It’s an event intended to break in the next generation of horse riders.

WINNER: The prize is given to the child who can stay on top the longest.  Most fall off in less than 8 seconds.

PENALTIES: There are no real rules in mutton busting.  Age, height and weight restrictions prevent injury to the sheep and spurs cannot be used.

WHO PARTICIPATES? Generally young children between the ages of four to seven.

A wild pony race at the Calgary Stampede

OBJECT: What do you get when you team up three kids and a wild pony? A crowd favourite. The team lines up outside a chute gate holding onto a lead shank that’s attached to their pony’s halter. The gate opens and the fun begins.

WINNER: The winner is when one of the three team members is able to mount the pony for a minimum of two seconds. Usually, the pony wins.

PENALITIES: Like mutton busting, there are no real rules.

WHO PARTICIPATES? Mostly children from age seven to 12. There are height and weight restrictions to protect the pony. 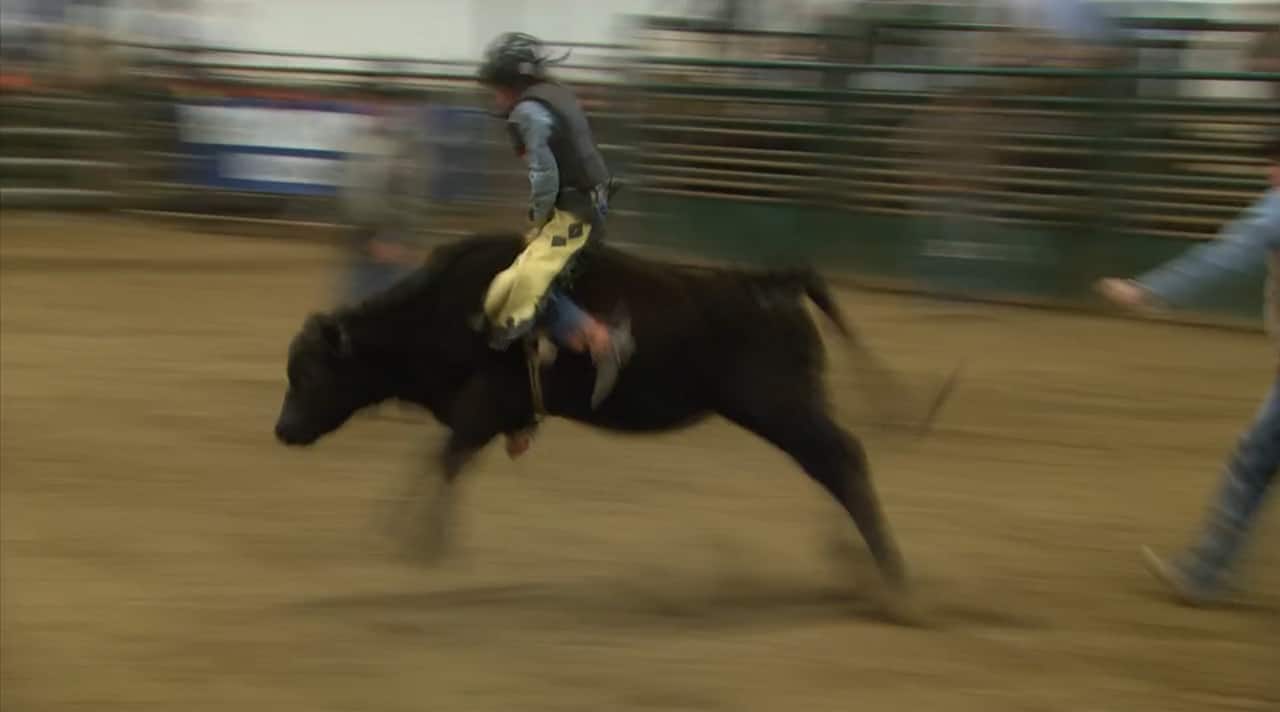 A boy tries out steer riding at a rodeo school in Alberta.

OBJECT: Similar to saddle bronc, the rider attempts to stay on a cow or young bull for eight seconds without falling off.

WINNER: As in other 'rough stock' events, half the score is awarded for the cowboy's ability to ride and half for the stock's ability to buck. Contestants are allowed to ride with one or both hands.

PENALITIES: Riders are disqualified for touching the animal or themselves.

GEAR: A rope around the torso of the animal.

WHO PARTICIPATES? Younger teen boys, steer riding is a precursor to bull riding. 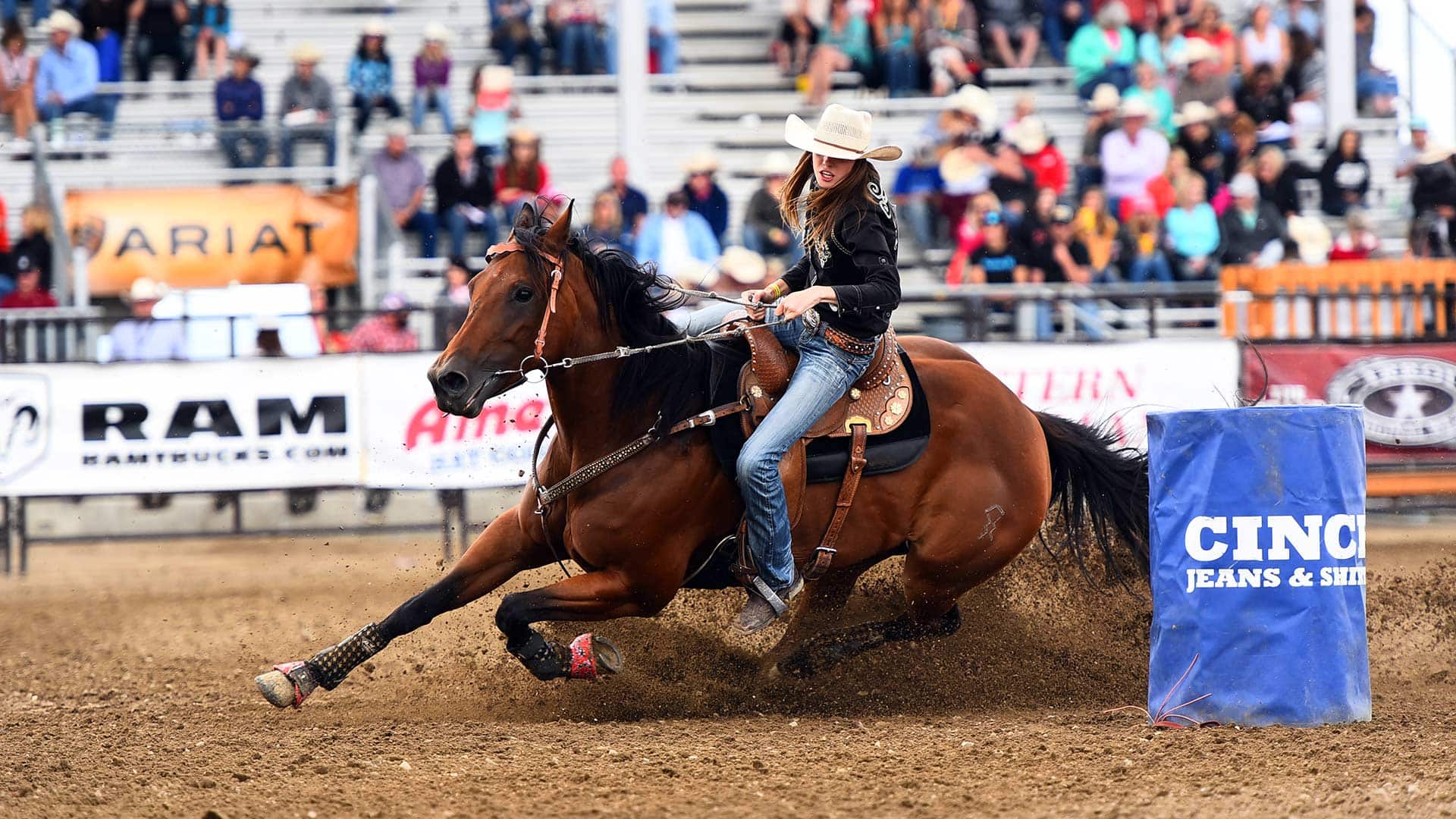 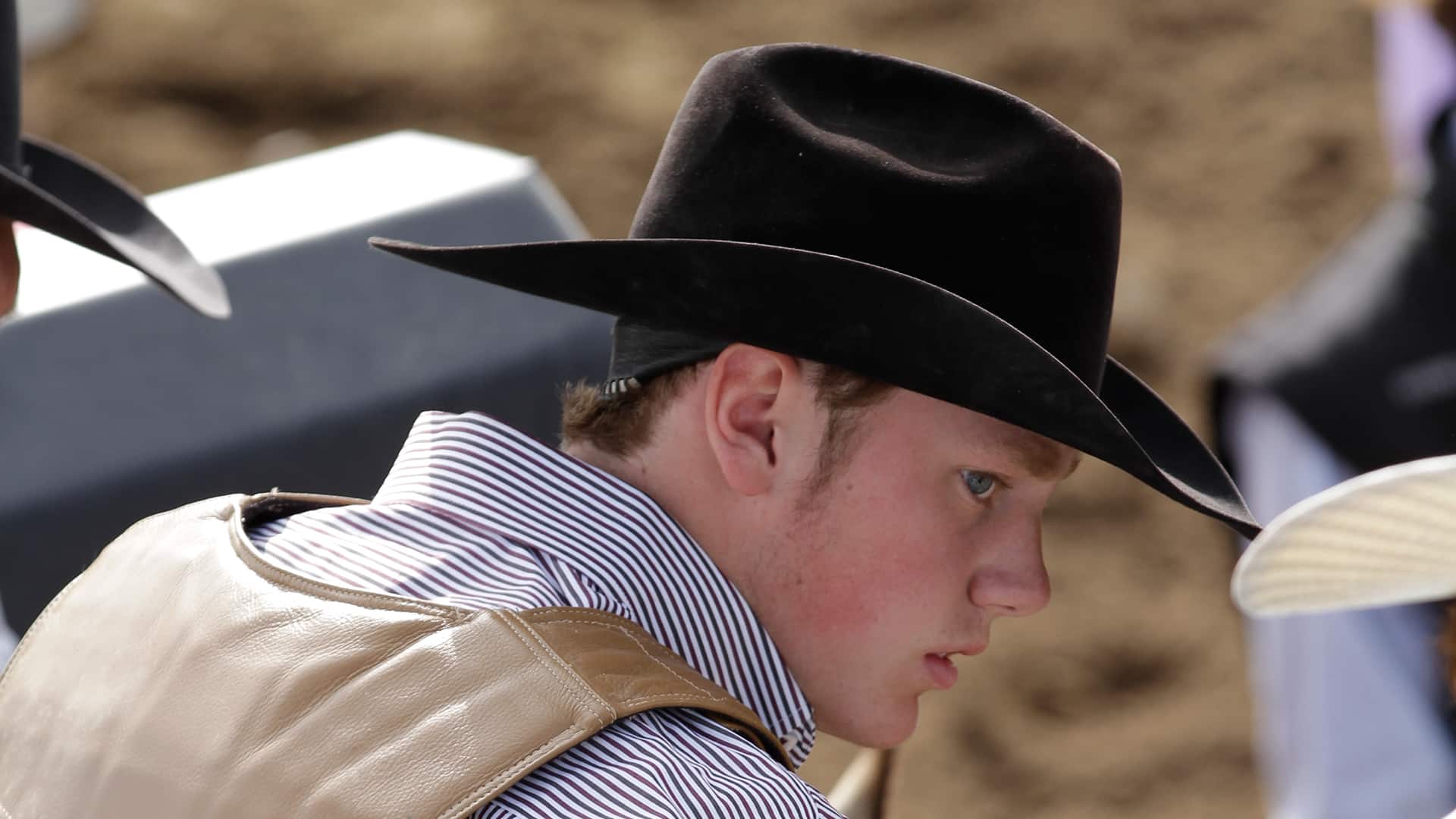 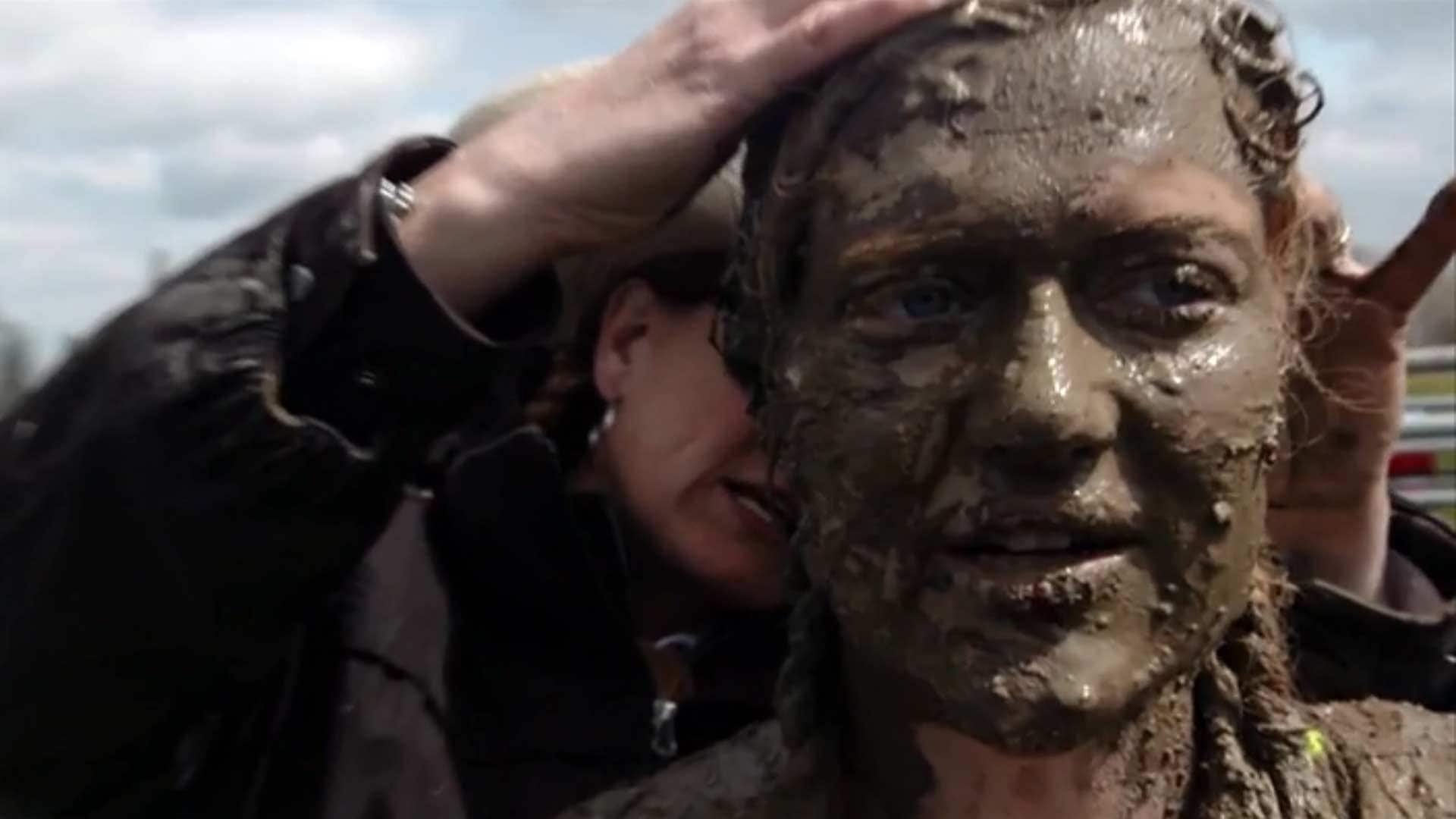 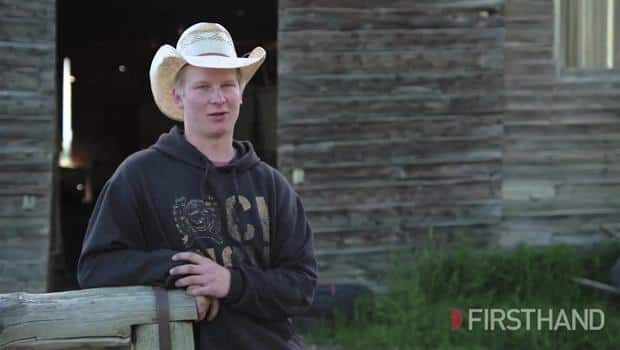 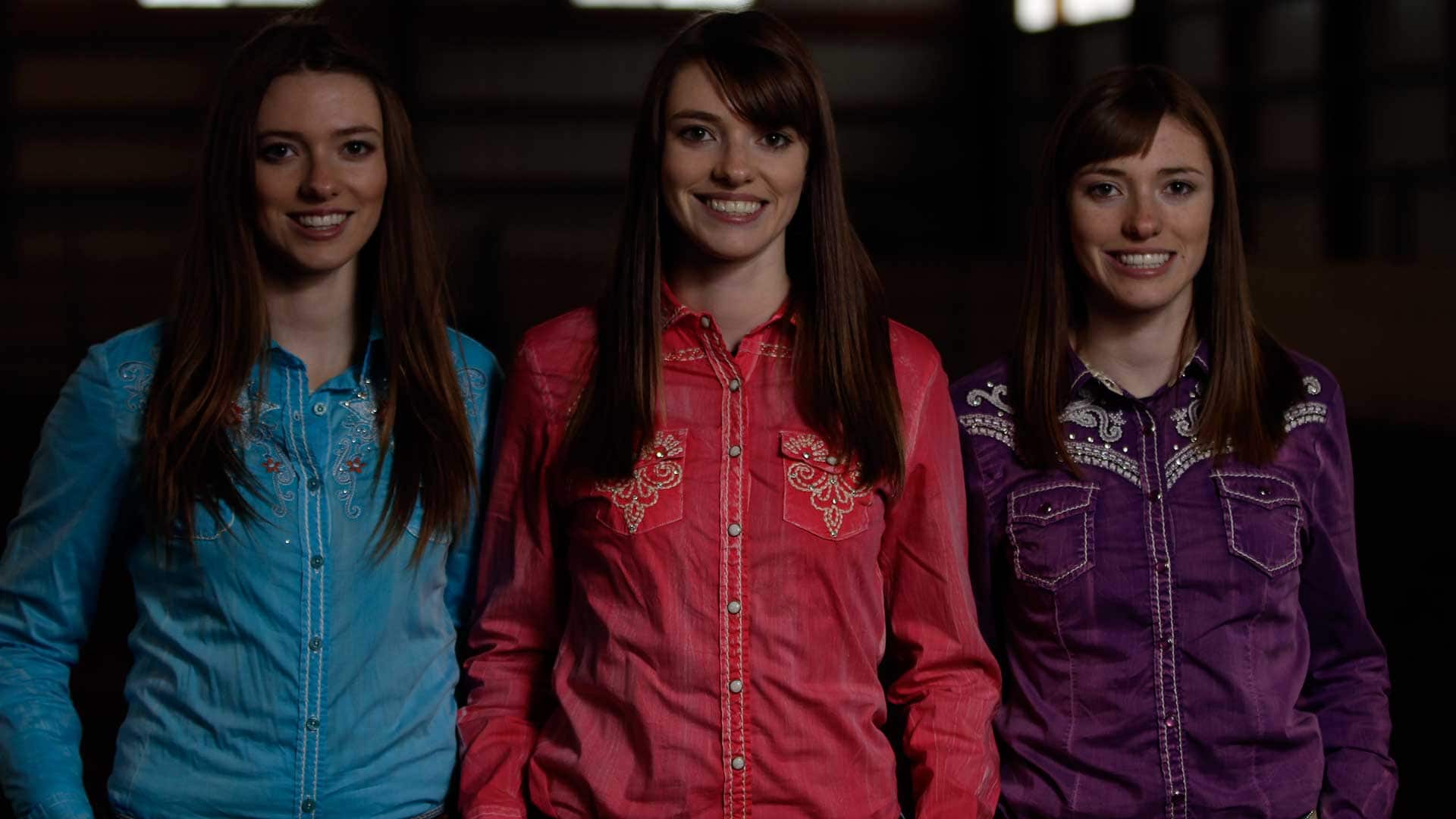