The Kanien’kehà:ka (or Mohawk) occupied the land – that is today southern Québec – long before the arrival of Europeans.

Our history books teach us that Kanehsatà:ke came to be in 1721, when Kanien’kehà:ka were forced to move from Montreal to its north shore, near Lac of Two-Mountains.  However archaeological proof such as ancient pottery artefacts as well as oral history attest that the territory served as traditional grounds for the Kanien’kehà:ka long before 1721.

The Seminary of St-Sulpice, a Roman Catholic order based in Paris, establishes a mission on Mount Royal (Montreal). Its objectives and obligations included evangelizing the Kanienkehà:ka, Algonquin and Nipissing.

King Louis XV orders the seminary to move its mission and grants them 9 square miles of land near the Lake of Two-Mountains (Lac-Des-Deux-Montagnes), on the north shore of Montreal.

Although the St-Sulpice mission was supposed to hold the land in trust for the Kanien’kehà:ka the seminary expanded this agreement to grant itself sole ownership rights.

The Sulpicians begin to sell cleared land to white settlers at great profit. The first non-Indigenous settlers arrive in Kanehsatà:ke.

The Treaty of Paris is signed. France cedes Canada to Great Britain.

The people of Kanehsatà:ke send a letter of protest about their treatment at the hands of the Seminary of St. Sulpice to the highest British civil authority in British North America. They demanded the civil authority of an Indian Agent replace the Seminary’s religious authority. Their demands are ignored and this leads to a strenuous relationship.  The Seminary issues rules and regulations that threatened the livelihood – and lives – of the people of Kanehsatà:ke.

At various times, governments tries to "settle" the Kanehsatà:ke situation by offering to relocate the  Mohawk people elsewhere.

The Government of Canada creates the reserves of Maniwaki and Doncaster and urges Algonquin and Mohawk to move in order to reduce tensions on the territory ran by the Seminary.

The British Parliament officially grants title to the land to the Sulpicians. Algonquin families move to Maniwaki (Kitigan Zibi).  The Sulpicians sell off their land plots to white settlers.

The Sulpicians change the place name of Kanehsatà:ke to Oka. The Canadian government refuses the Kanien’kehà:ka (Mohawk) position that the original grant was meant to set aside land for them, or to compensate them for the loss of this territory. 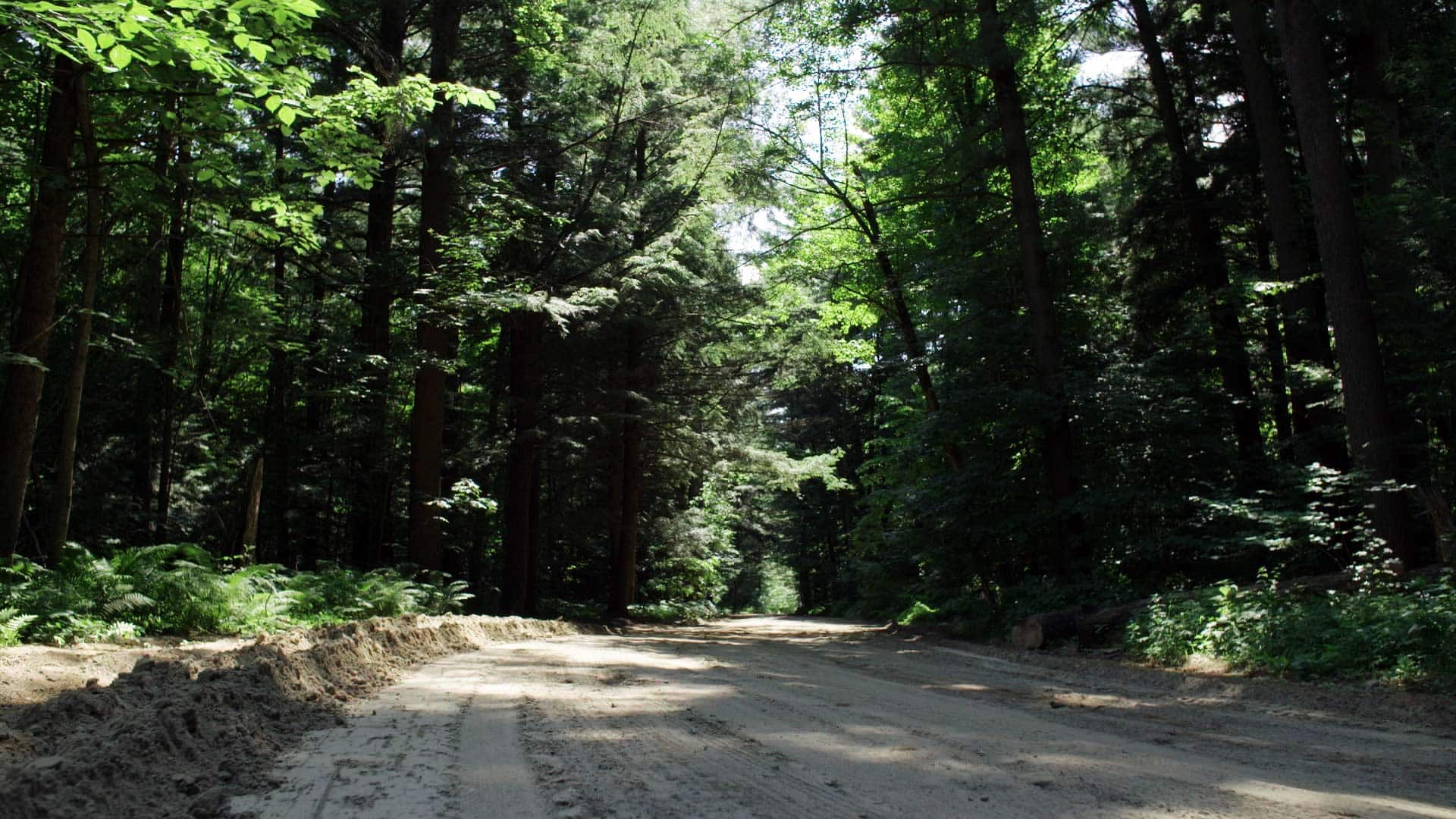 Birth of the area known as “The Pines” (also known as “The Commons”). After sand avalanches submerge the village of Oka in over a meter of sand a group of people comprised of Mohawks and Non-Indigenous settlers plant pines on the mountain to stabilize the ground. Somewhere between seventy and eighty thousand pine trees are planted.

The Canadian Supreme Court maintains the St-Sulpice order has title to the land. Kanesatà:ke has been defined as an 'interim land base' by the federal government, unlike the reserves which come under the 20th-century Indian Act.

The Canadian Government installs the Elected Band Council system under the Indian Act but still does not recognize Kanehsatà:ke either as Mohawk territory or as an “Indian” reserve.

The Seminary of St-Sulpice sells the remaining land plots to the Municipality of Oka and vacates the area. 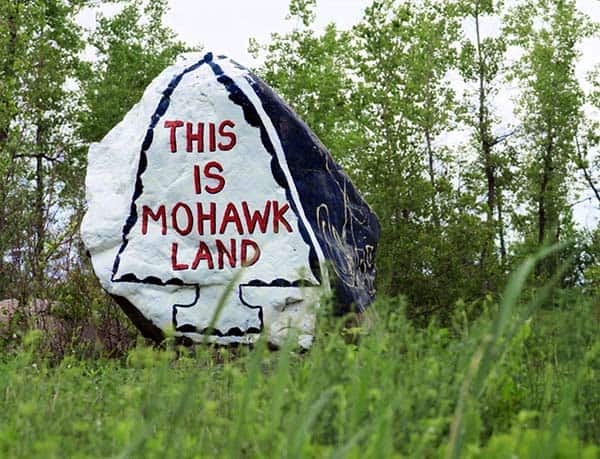 The Government of Canada purchases land owned by the Sulpicians and occupied by the Mohawk. This sale however does not resolve the issue of ownership of the Pines. Moreover, it limits the Mohawk people to roughly 6 kilometers.  (They had once occupied 165 kilometers)

The municipality of Oka rents out part of the Pines to the Club de Golf Oka. A 9-hole golf course is built in the Pines without Mohawk consent. 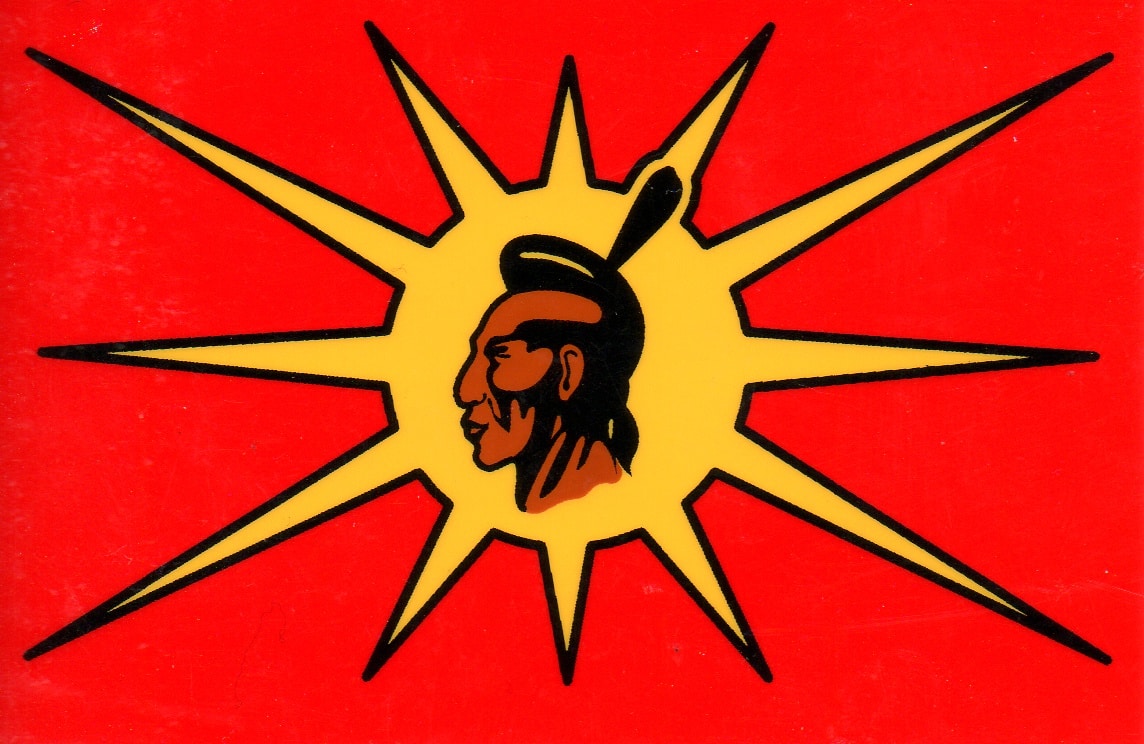 Creation of the Mohawk Warrior Society. Their objective is to repossess and protect Kanien’kehà:ka territories according to the Kaienerekoawa; “the Great Law of Peace”.

The Mohawk people of Kahnawake, Kanehsatà:ke and Akwesasne present a joint comprehensive land claim asserting Aboriginal title to lands along the St-Lawrence River, the Ottawa River and the Lake-Of-Two-Mountains.  The claim is rejected on the bases that the Mohawks had not possessed the land continuously since time immemorial, and that any Aboriginal title had been extinguished.

The Kanehsatà:ke Band filed another official land claim with the federal Office of Native Claims regarding land which includes the Pines (the “Commons”).  The claim is accepted for filing, and funds are provided for additional research of the claim. Nine years later, the claim is rejected, on the grounds of failing to meet key legal criteria.

Oka announces its plans to expand the golf club into an 18-hole golf course. The project also includes building a condominium complex. The propose extension is to be built over Kanehsatà:ke’s cemetery and the pines.

Grand Chief Clarence Simon demands that the project be stopped.

Several provincial and federal government representatives ask the Municipality of Oka to reconsider the development plans. The Mayor of Oka, Jean Ouellette, agrees to a moratorium.

Grand Chief Simon is dismissed. The Clan Mothers replace him with George Martin.

The mayor of Oka puts an end to the moratorium and gives the go-ahead for the golf course expansion. Kanehsatà:ke traditionalists (people of the Longhouse) immediately erect a barricade on the dirt road that leads to the disputed land.

The Municipality is granted an injunction by the Court. The members of the Kanehsatà:ke community occupying the dirt road are ordered to remove the barricades. 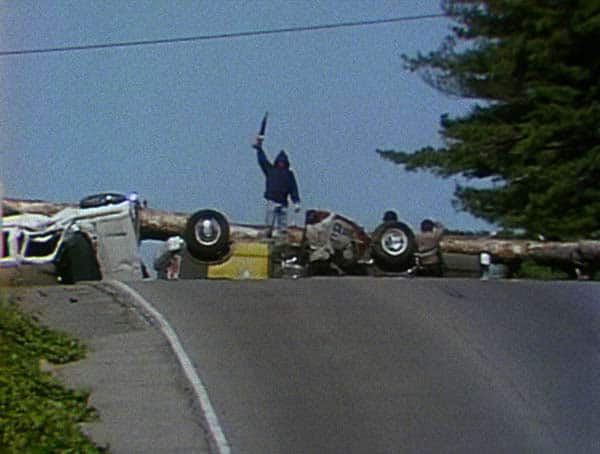 The people in the Pines refuse to dismantle their barricade. The Warriors Society join the people of Kanehsatà:ke and the barricade is reinforced.

Several First Nation communities across Canada set up their own blockade or organize their own protest in support of the Mohawk people. In British Columbia several railways and roads are blocked.

Ovide Mercredi, Vice-Chief of the Assembly of First Nations comes to Kanehsatake to provide aid and technical advisors.

Also on that day 10,000 people take to the streets of Chateauguay (Kahnawake’s neighbouring town) demanding that the barricades blocking access to the Mercier Bridge be taken down. An effigy of a Mohawk Warrior is hanged and burned. This reoccurs several nights in a row.

Deployment of Canadian Armed Forces around Montreal (in Saint-Benoit, Blainville and Saint-Rémi)

4,000 soldiers with more than a thousand vehicles, tanks, Grizzlies, helicopters, trucks, artillery pieces, and other equipment, are in place in and around Kanehsatà:ke and Kahnawake. Close to 1,000 soldiers replace the provincial police and surround the Mohawk barricades. Mohawk negotiators suspend further negotiations.

Negotiations at Kanehsatà:ke re-open. Mohawks seek recognition of their sovereignty, no arrests, and long-term negotiations that would grant them title over the territory.

The Canadian Army announces that it is going to proceed with the dismantling of the Mohawk barricades.

Fearing an imminent invasion of the community by Canadian troops, the people of Kahnawake evacuate their women, children and elders. A convoy of 75 cars leave Kahnawake and cross the Mercier Bridge into Montreal. They are greeted by a furious mob that throws rocks at the passing vehicles. Several people are injured.

Mohawk warriors in Kahnawake negotiate a deal that leads to the reopening of the Mercier Bridge.

The army advances on the Mohawk barricades around Kanehsatake. There are only around forty warriors left and almost as many women, children and reporters. As the military troops advance the Warriors retreat to the Onen:to’ken Treatment Centre. 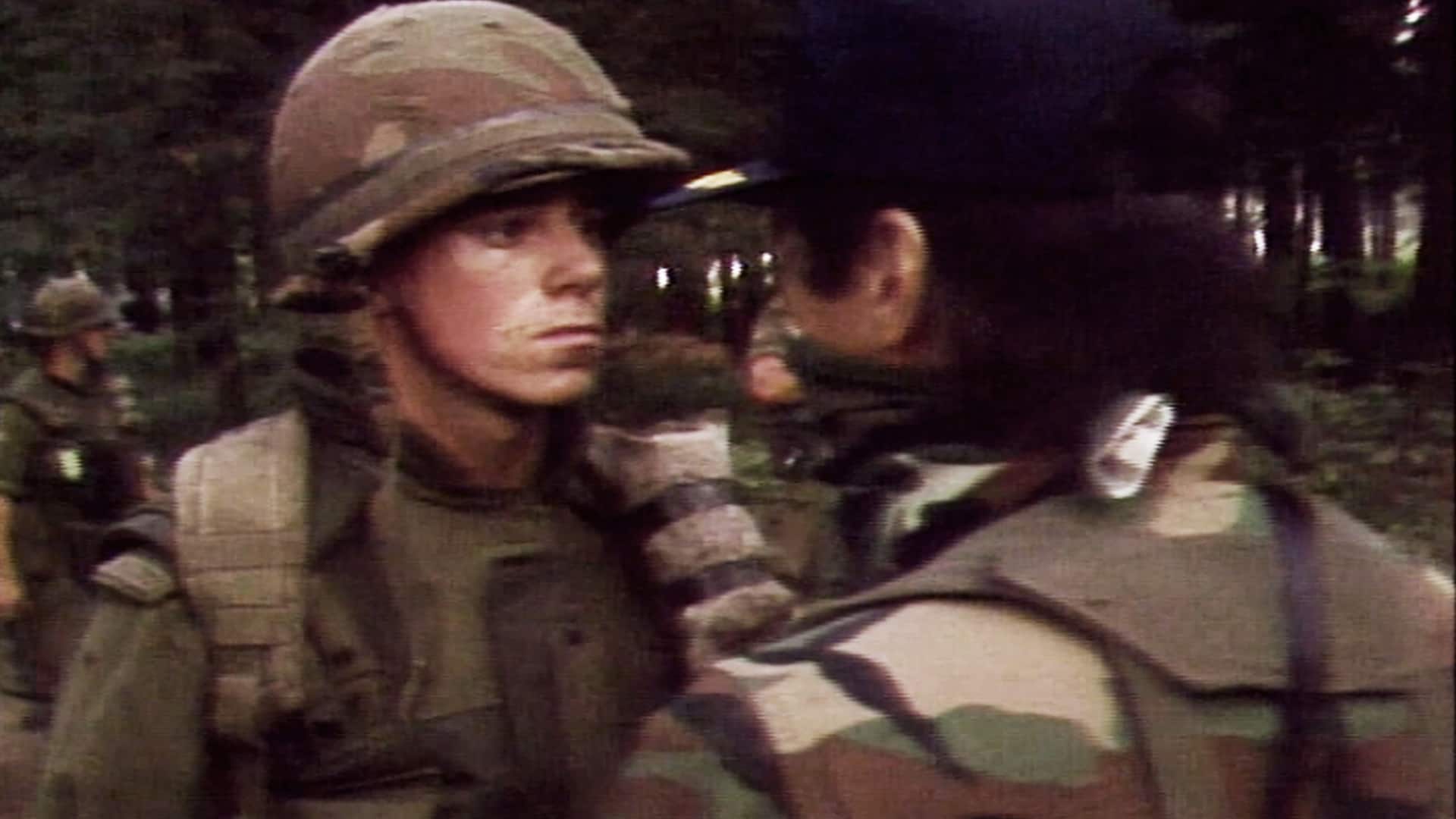 Also on that day Shaney Komulainen - a photographer for The Canadian Press - takes a picture of a Mohawk Warrior facing a Canadian soldier. This snapshot has become the most recognizable image of the Oka Crisis. 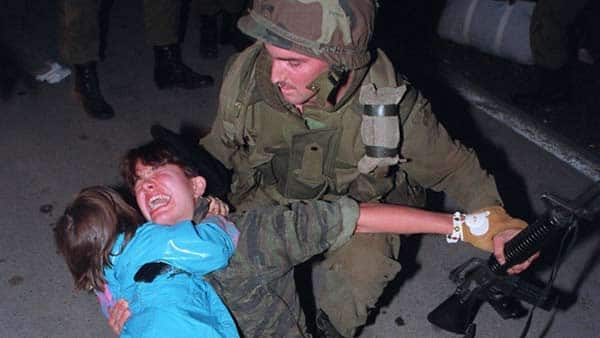 After long discussions as to what should be done next, the militants in the Onen:to’ken Treatment Centre decide to disengage.

4 pm   The Warriors burn documents and their weapons. Spiritual leaders perform a ceremony.
5:30 pm  The Warrior flag flowing over the Treatment Centre is lowered.
6:45 pm  The group of people comprised of Warriors, men, women and children walk towards the military lines. The surrender quickly turns to chaos as some try to flee through the woods. The confrontation escalates and a physical altercation between the soldiers and Mohawk militants ensues.  During the chaos 14-year-old Waneek Horn Miller is accidently stabbed in the chest by a soldier’s bayonet while she is holding her 4 year-old sister. Luckily she survives.

7:30 pm The Army has the scene under control, with most of the Mohawk militants in plastic handcuffs. Five warriors are handed over to the Sureté du Québec for arrest while the rest are loaded onto military buses. Most of them are released the next day.

The last 300 soldiers of the Canadian Armed Forces retreat from Oka.

Prime Minister Brian Mulroney announces the Royal Commission on Aboriginal Peoples. This commission is established to address many issues of Aboriginal Status that came to light with the Oka Crisis.

Ronald Cross A.K.A Lasagna and Gordon Lazore A.K.A Noriega are found guilty of 29 out of 56 charges against them.  They are sentenced to 23 months in jail. Ronald Cross is released in April. 34 Mohawk individuals are acquitted of all charges related to the events of 1990.

The Royal Commission on Aboriginal Peoples releases its report.  It sets out a 20-year agenda to implement real change in the relationship between Canada and its Indigenous population, and urges Canadians to begin a national process of reconciliation.

S-24 is passed by Parliament. The Bill clarifies the relationship between Kanesatà:ke and the federal government, and makes its relationship with governments comparable to those of reserves.

Signing of La Paix Des Braves, an agreement between the Government of Quebec and the Grand Council of the Crees. This historic Agreement implements - with respect to the recommendations of the Royal Commission on Aboriginal Peoples - the sharing of revenues derived from mining, hydroelectric development and forestry carried out on the traditional lands of the Cree People.

Four women in Saskatchewan offer a series of teach-ins to protest Canadian Bill C-45 – an omnibus bill that aims at changing land management on reserves, weakening environmental laws as well as removing protection of hundreds of watercourses. The hashtag #Idlenomore is created and used to call upon people to partake in the teach-ins.

Attawapiskat chief Theresa Spence begins a hunger strike to call on the Canadian government to address First Nation treaty issues.  Several rallies and protests across the country are organically organized with  #idlenomore.

Idle No More quickly becomes one of the largest Indigenous mass movements in Canadian history.

On the 25th commemoration of the Kanehsatà:ke siege (Oka Crisis) the  newly appointed mayor of Oka, Pascal Quevillon and Kanehsatà:ke Grand Chief Serge Simon vow to never put forth a development plan in the Pines that would threaten the peace of the region. The issue of who holds title of the land is still however unresolved.

At the Woods' Edge: An Anthology of the History of the People of Kanehsatà:ke
Brenda Katlatont Gabriel-Doxtater, Arlette Kawanatatie Van den Hende
Kanehsatake Education Center, 1995

People of the Pines: The Warriors and the legacy of Oka
Geoffrey York, Loreen Pindera, Dan David
Little, Brown, 1991 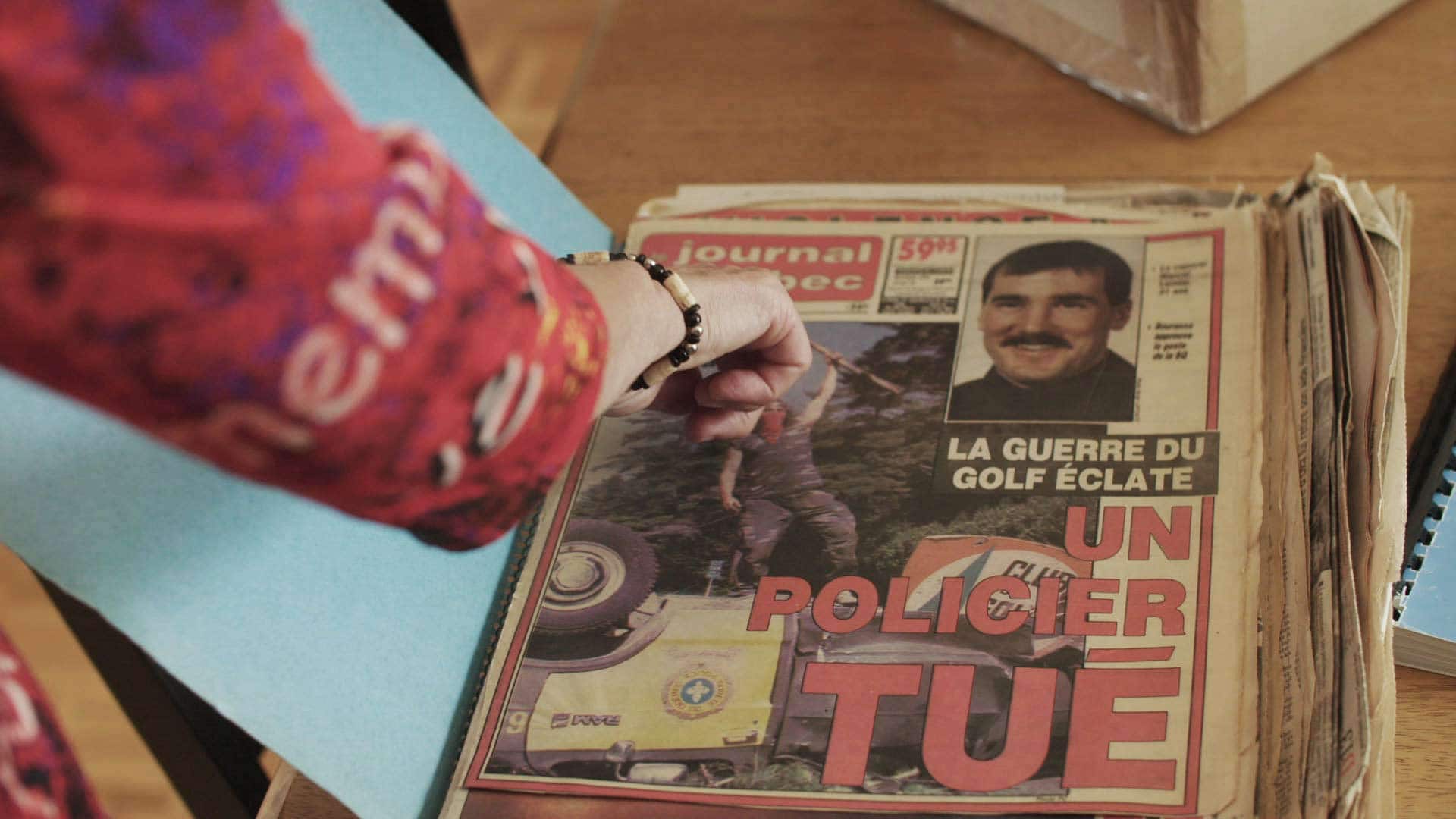 Oka: In the News 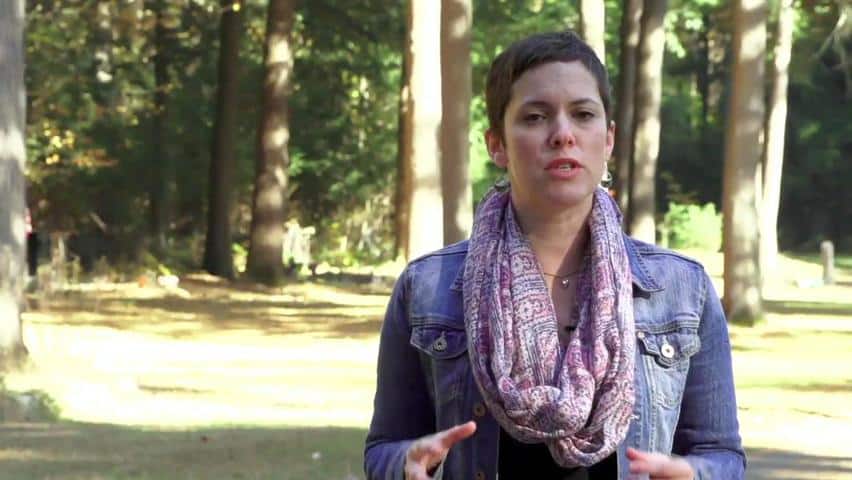