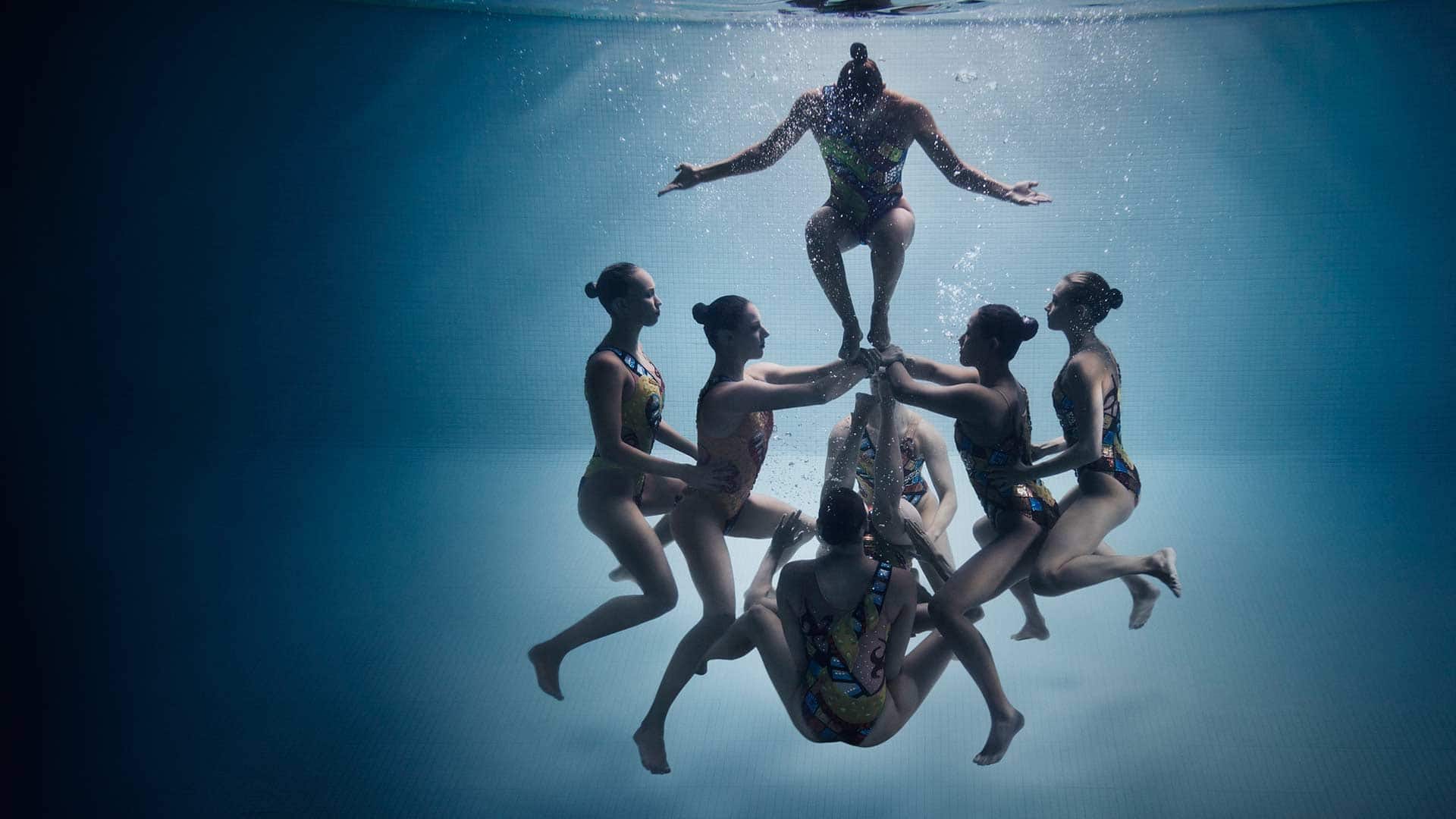 Synchronised swimming is for girls. It's for girls who can run a 400 metre sprint while holding their breath, and smiling. Perfect dives beyond the sequins and mascara as it follows the Canadian synchronised swimming team through the most gruelling year of their lives. After winning gold at the Pan American Games in Toronto these elite athletes and their relentless trainer, Meng Chen, are hungry for a spot at the ultimate competition; Rio De Janeiro 2016. And they're willing to do whatever it takes to make it. 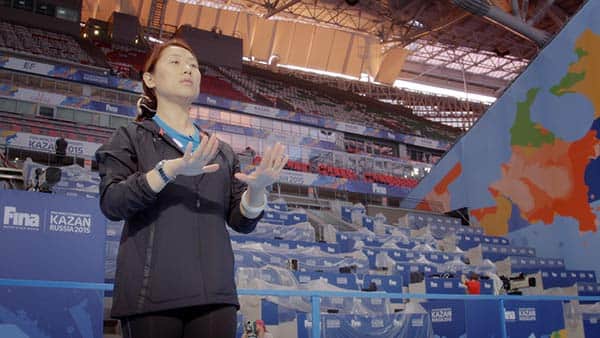 Perfect begins at the national trials in Montreal. Here, Meng Chen puts young hopefuls through intensive sports like gymnastics, running and strength training before they can even dip a toe in the pool. Only the girls who excel at all of these disciplines will make the cut. And that's just the beginning. Meng Chen is looking for precision, synchronisation and a fighting spirit and she'll send these girls through hell to get it. That's because synchronised swimming is as much of a contact sport as football. Meng Chen's girls have suffered concussions, smashed vertebrae, fractured feet, broken noses, black eyes and dislocated knees in their quest to get here. And for those who make it, for 10 hours a day, six days a week they must train. 'Synchro' is their life. But, as team member, Claudia Holzner says, "What if we don't make it, What are we going to do? What am I going to do with my life?"

MORE: "These girls are machines. They are complete and total athletes." Director Jérémie Battaglia was shocked by the athletic rigours of synchronized swimming.
MORE: A Day in the Life of One of Canada's Synchro Champs: Claudia Holzner

Scene from the film: "I think we're the underdogs...we're coming from behind and we're going to get you."

Meng Chen doesn't have time for 'what ifs'. "You go out there, you kill. This is war," she tells her girls at the World Championships in Kazan, Russia. This competition is the ultimate predictor for the Olympics. Those who rank well here almost always keep these rankings through to the Olympics. Team Canada, ranked number 1 in the Americas, is after a top 3 ranking in Kazan to put them in prime position to qualify for the Olympics. Their biggest challenge is not their choreography nor their synchronicity, but their diversity. In a conservative sport like synchronised swimming, the definition of perfection is sameness. This is why Russia and China are always on top. In those teams, every girl is the exact same weight, height and colour. Team Canada meanwhile, represents the country's cultural diversity, which is what makes them the underdogs. 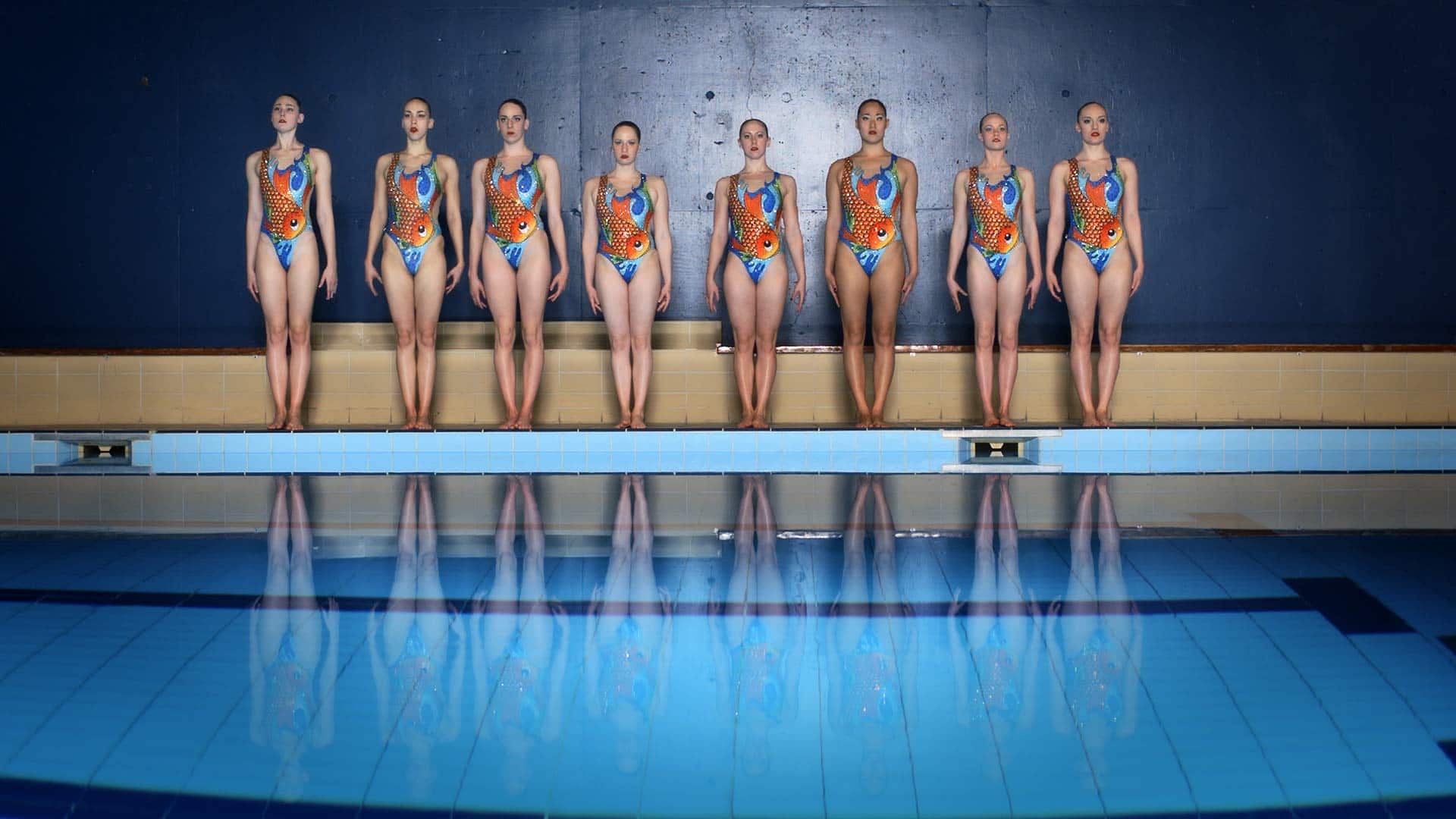 The pressure to look perfectly the same is not lost on our girls. In a sport where bodies are weighed, measured and analysed on a regular basis some of the team struggle with eating disorders. Many wish synchronised swimming would move with the times, like figure skating or diving, and drop its laser-like focus on body perfection. But for now, these are the unwritten rules of the game. The only way Team Canada has a chance at their Olympic dream is to outswim and outperform the competition with a routine that totally blows the judges out of the water.

Perfect follows the team as they dive into the pool and swim their hearts out at the World Championships. They give the performance of a lifetime and score an impressive 90 out of 100. But it's not enough to make it to the top 3. The team is devastated. Chen asks herself; Did I push them too far? Too hard? The problem is, synchro, like all judged sports, is a hotbed of political games, making it almost impossible for a team to change their ranking. And so, competition after competition, rankings fall the same way.

But not if Meng Chen has anything to do with it. With just six months before the Olympic qualifier Chen decides to pull a risky move. She throws out their tried and tested routine and starts from scratch. Chen enlists a cutting edge choreographer, and the help of a stage director from the National Theatre School of Canada to teach the team to move with purpose. Together they create a totally unique routine, a routine in their image. 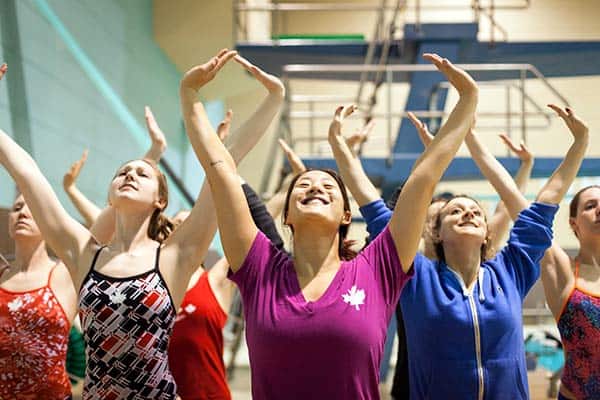 The team perfects their routine on the ground.
Photo: Jérémie Battaglia

"We have tried a lot of things. The only thing we haven't tried is to enjoy. Let's do that," says Meng Chen as the girls go out to compete for their last chance to make it to Rio 2016. Team Canada know they're not perfect and will never be. But perfection will always be their goal. Even if it's absurd. Even if it's impossible. There's no way they're going to give up on perfection.

With unprecedented access to the team and their trainer, Perfect follows this determined, strong and hard working group of women in their quest to make it to the Olympics. From Montreal to Bratislava, Kazan and Rio de Janeiro, battling eating disorders, dislocated knees and crushing losses, these girls never surrender. And, more importantly, they never stop smiling. 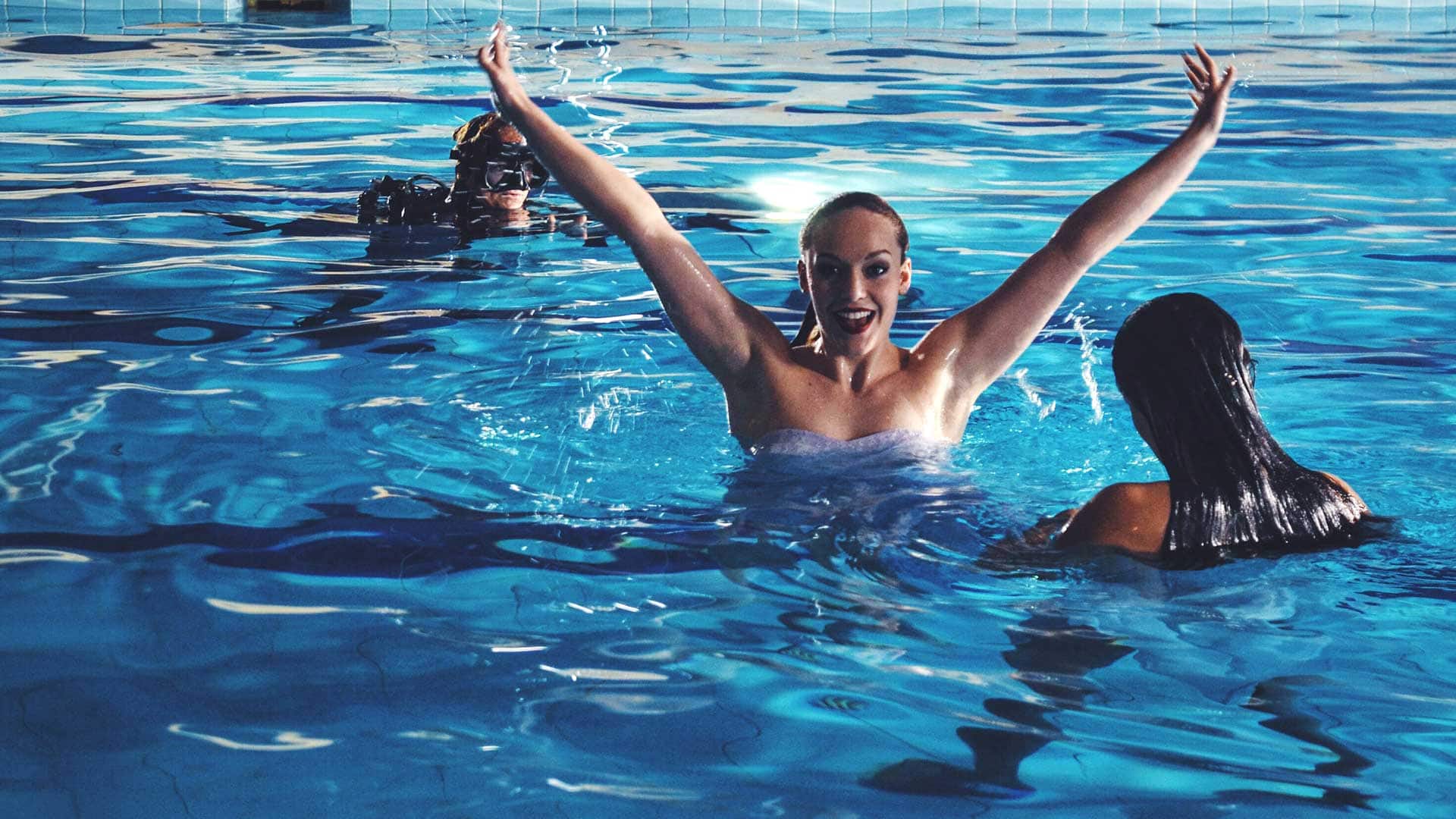 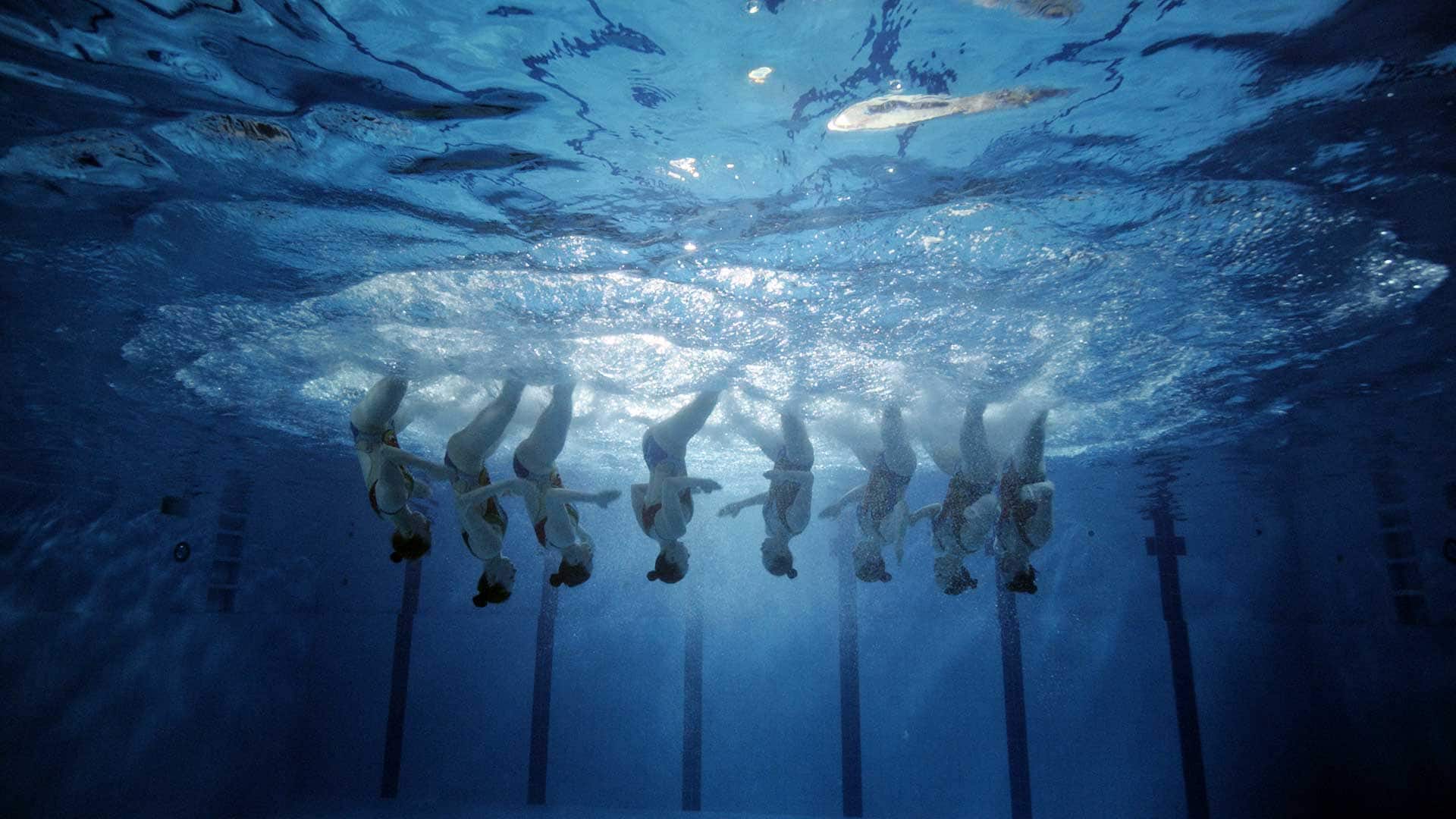 Putting the Spotlight on Synchronized Swimming, A Little-Known Olympic Sport