Salute to the Sutters

The Sutters are hockey in Alberta. No other family has had six NHL playing brothers. They all played the game the same way: hard-nosed, forechecking, muckers and grinders. Collectively the Sutter brothers have put in more than five thousand games and captured six Stanley Cups. And that success started with the down home work ethic of the family dairy farm. The roots of this family tree are firmly planted in Viking, Alta., the town of a thousand people an hour and a half southeast of Edmonton.

We spent some time with the matriarch of the Sutter Clan, Grace, on the family farm near Viking. She spoke of the secret to the Sutter success — hard work.

Grace Sutter raised her boys, worked the dairy farm and in later years packed groceries at a local store in Viking. She's know around town as Gramma Grace. For a dozen years she'd host a farm day and BBQ for hundreds of local school children at a time. She battled breast cancer in 2009. She credits prayer and hard work for her family's success.

The oldest of the Sutter brothers played Junior B hockey for the Vegreville Jets. While his brothers went on to play Junior A and NHL hockey, he spent 20 years helping with the family farm. He moved to BC with his wife Margaret. And in 2004 Margaret and some co-workers hit the jackpot. They won $10 million in the lottery, collecting $1.25 million each.

Brian was drafted by the St. Louis Blues 20th overall in the 1976 NHL entry draft. He played a dozen seasons, all with the Blues. He went on to become a head coach with the Blues, Boston Bruins, Calgary Flames, and the Chicago Blackhawks. He won the Jack Adams Award as best coach in 1991. His Number 11 is retired by the Blues.

Shaun Sutter, Brian's son, (born June 2, 1980) (position: right wing) was drafted by the Calgary Flames in the fourth round, 102nd overall, in the 1998 NHL entry draft but never made it to the NHL. He played in the British Elite Ice Hockey League.

Darryl Sutter played for the Chicago Blackhawks. He was drafted in 1978 he played for about a decade until an injury cut his career short. He then turned to coaching for the Blackhawks, San Jose Sharks and Calgary Flames and most recently the Los Angeles Kings.

Duane Sutter played for the New York Islanders. He won the Stanley Cup in his first four seasons with the Islanders. He coached the Florida Panthers.

Brody Sutter, Duane's son (born Aug. 26, 1991) (position: right wing) plays for the Lethbridge Hurricanes after being traded from the Saskatoon Blades in the Western Hockey League. He was drafted by the Carolina Hurricanes 193rd overall in the seventh round of the 2011 NHL entry draft.

Brent Sutter played for the New York Islanders and the Chicago Blackhawks. He played 1,111 games and recorded 829 points. His teams won the Stanley Cup twice. After finishing his NHL career he bought the WHL Red Deer Rebels. He also became the first coach to lead Canada to consecutive goal medals at the World Junior Championships. He coached the New Jersey Devils, and The Calgary Flames.

Merrick Sutter, Brent's son, had a brief career with the Canmore Eagles of the Alberta Junior Hockey League. He currently serves as the senior vice president for the Red Deer Rebels.

Rich Sutter, twin brother of Ron, was drafted 10th overall by the Pittsburgh Penguins in the 1982 NHL draft. He played 874 games with seven teams during his 13 year career. Seven teams saw him on their line up. The Pittsburgh Penguins, Philadelphia Flyers, Vancouver Canucks, St. Louis Blues, Chicago Blackhawks, Toronto Maple Leafs, Tampa Bay Lightning. Rich Sutter is the only Sutter brother who hasn't played nor worked for the Flames.

Ron Sutter was the highest draft pick of the family, fourth overall by the Philadelphia Flyers in 1982. He is the only Sutter to play NHL hockey for an Alberta team, the Calgary Flames. Ron played for seven teams, including the Flyers, Flames, St. Louis Blues, Quebec Nordiques, New York Islanders, Boston Bruins and the San Jose Sharks. Ron and Brian are the only brothers who didn't play for the Chicago Blackhawks. 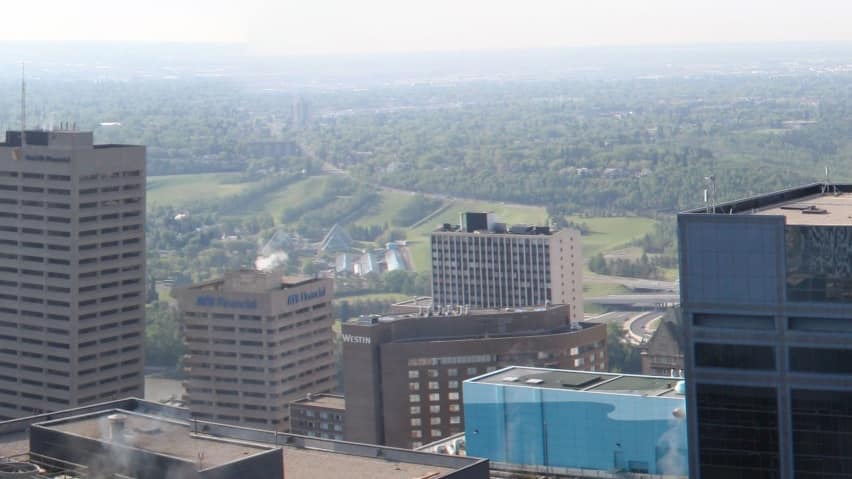 Downtown Views Downtown Edmonton: Views from above Some impressive views from the top of Edmonton's tallest buildings

A look back Shawn Horcoff: Notable moments A look at Horcoff's time with the Oilers, including video from the CBC archives