Tinder before its time? Stud books and the evolution of the Clydesdale horse breed

While apps like Tinder may be responsible for many a modern-day human hookup, breeders of Clydesdale horses have been relying on a more analog brand of matchmaking for centuries.

The Clydesdale breed’s story goes all the way back to the early to mid-18th century, when local horses in Lanarkshire, Scotland, were strategically bred with Flemish stallions. Back then, industrious farmers were looking for more might and speed to meet the demands of agricultural expansion — and the Clydesdale horse delivered them in spades.

By the early 19th century, breeders had built more than just a solid workhorse. Stronger and faster than a typical draft horse of the time, Clydesdales were eager to work and slow to tire, but that wasn’t their only appeal. The breed’s elegant movement and stunning beauty enraptured Clydesdale devotees.

Creating this powerhouse was not as easy as a simple swipe to the left or right. The making of one of the world’s greatest horses was a direct result of the vital records carefully tracked in official stud books.

Stud books are used to record the pedigrees of purebred horses and have long played a critical role in breed improvement. But, despite the Clydesdale’s enormous popularity around the world, breeders toiled without an official stud book until the latter part of the 19th century — almost 40 years after the name “Clydesdale” had come into common use.

Obsessively seeking better and better bloodlines, breeders developed a system where prize-winning stallions were toured throughout their district to breed with local mares. Farmers were always on the lookout for a quality stud, so stallions had their own calling cards. Stud representatives would distribute these printed stud cards, which were essentially the horse world’s version of a dating profile. They offered key facts that set the stallion apart from the herd, including its pedigree, prizes it had won, the breeder’s fee, and the dates and locations the stud would be standing for that season.

After being selected, the studs would often be transported long distances to service mares, a practice that helped spread Clydesdales throughout Scotland and England, and enhance and diversify bloodlines. 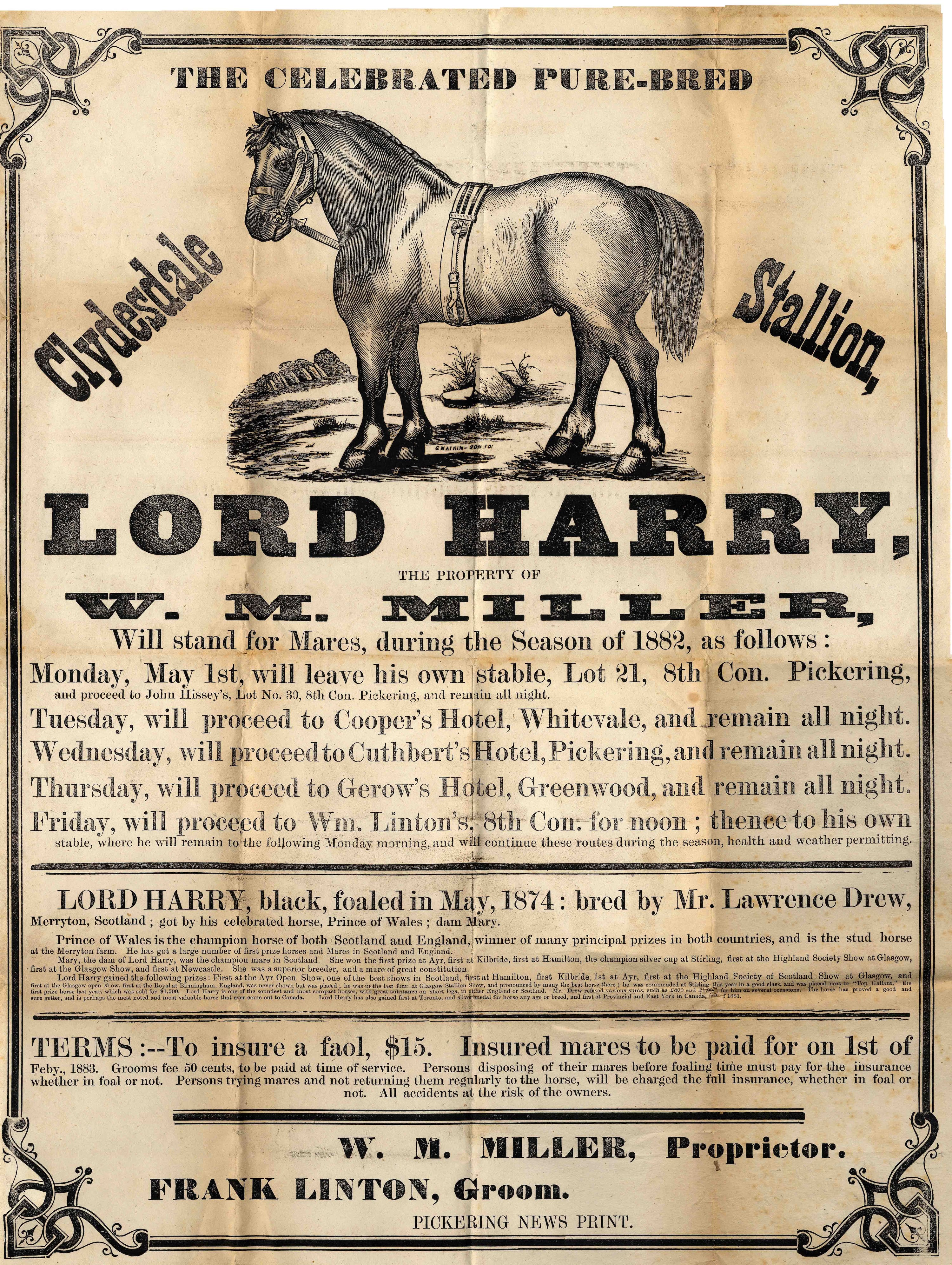 The late 19th century was an amazing time to be a Clydesdale breeder. Elite studs garnered huge buzz. Stud representatives, with their remarkable instinct for strong bloodlines, reached celebrity status. Thousands attended auctions and shows, massive sums were paid and people went to great lengths to obtain the horse of the moment.

Not surprisingly, prices rose, and horses that once had no known history suddenly acquired lengthy aristocratic ancestries. That’s when breeders began to cry out for proper documentation, and the first official Clydesdale stud book was published in the U.K. in 1878. Shortly after, Canadian and American Clydesdale associations followed suit, stoking an already frenzied market for impressively pedigreed Clydesdales in North America.

Breeders consulted the books to find the ultimate sires, in constant pursuit of Clydesdale perfection. They argued about what mix made the perfect horse, and this quest for improvement meant that ideal breed characteristics evolved over time. The Clydesdale shifted in size and look, moving from a shorter, “draftier” horse with hairier legs and exaggerated features later in the 19th century, to a more fine-featured, taller breed that now stands at an average of 16 to 18 hands (64 to 72 inches tall from the ground to their withers).

But even after hundreds of years of evolution, what has always drawn Clydesdale lovers to the breed is its mix of refinement and power. In more recent years, with a declining population and a smaller gene pool, the stud book has also had to evolve.

Once the match is made, stallions can be brought to mares for breeding the old-fashioned way, or semen can be couriered. As artificial insemination technology improves, so do pregnancy rates using this method. These advancements mean that herds around the world that are struggling with a smaller gene pool can benefit from the DNA of an outstanding stallion that lives thousands of kilometres away.

Today, even embryo transfer is an option. An embryo from a donor mare can extend breeding options for recipient mares that have trouble with pregnancy or foaling. This also allows valuable female genes to be passed on to a new generation.

Since its genesis, the business of breeding Clydesdales has transitioned from friendly neighbourhood introductions in the barnyard to high-tech international hookups. But unlike Tinder and other dating apps, there’s more at stake for today’s breeders than making an ideal match. Breeders throughout North America, Australia and the U.K. are striving to ensure a healthy future for these gentle giants for centuries to come.

Watch Clydesdale: Saving the Greatest Horse on the documentary Channel.