Calling himself, ‘the ladies’ pet and the men’s regret’ Siki broke race, fashion and cultural barriers In the 1960s and ‘70s

According to his former student and protégé, Adam “Edge” Copeland — a former WWE champion and Hall of Famer — Sweet Daddy Siki was the “Jackie Robinson of wrestling.” While that may not be a strictly accurate comparison — wrestlers like Bobo Brazil and “Sailor” Art Thomas broke the colour bar before him — it is true that Siki was a trailblazing performer in more ways than one.

And yet, outside of hardcore wrestling fans, most people don’t even know Sweet Daddy Siki’s name. The Documentary Channel film Sweet Daddy Siki examines how the man born Reginald Siki went from childhood poverty in Texas to sell out Maple Leaf Gardens.

While Siki may not have been the first Black pro-wrestler, he did take part in what’s thought to be the first integrated world championship match in wrestling history when he faced in-ring rival and real-life friend “Nature Boy” Buddy Rogers in Greensboro, North Carolina. Both men were threatened by the Ku Klux Klan: Siki for daring to touch a white man, Rogers for helping integrate the sport. Klansmen sat at ringside. Thankfully, Rogers and Siki left the arena unharmed. Throughout his career in the United States, Siki would have more run-ins with the Klan but refused to back down in the face of threats.

“When they see that you’re frightened, they’ll start running after you,” he explains. “There there’s no telling what might happen. I didn’t run, and I got through it.”

Siki faced racism in other, subtler ways, as well. Indeed, it was racism that caused him make Canada his home base.

In the early 1960s, Siki was at the top of his profession, performing as a headliner around New York City. One night after a show, he went to a party with other wrestlers, as well as some promoters. He brought along his wife, Ann — a Canadian, who he had met while working in Toronto. Ann was white.

“They walk in there, and there’s a vibe,” says wrestling historian Greg Oliver. “A different sense from all his friends, and especially the promoters. They start treating him a little differently. His bookings start going down a little bit. Week after week, he just isn’t making as much money.”

His friend and fellow retired wrestler Ricky Johnson is more blunt. “He’s in the opening matches, instead of in the semi-final or the main event,” he says. “He’s going lower and lower on the card. They forced him to leave.”

In Canada, Siki would reach his peak in popularity and performance. He refined his character, developing the cocky, arrogant heel persona that became an archetype in the industry. He dubbed himself “Mr. Irresistible.” He was a Black wrestler who had a gimmick that wasn’t rooted in his colour. He didn’t want you to hate him because he was Black. You were supposed to hate him because he was a vain, rude, arrogant prima donna. 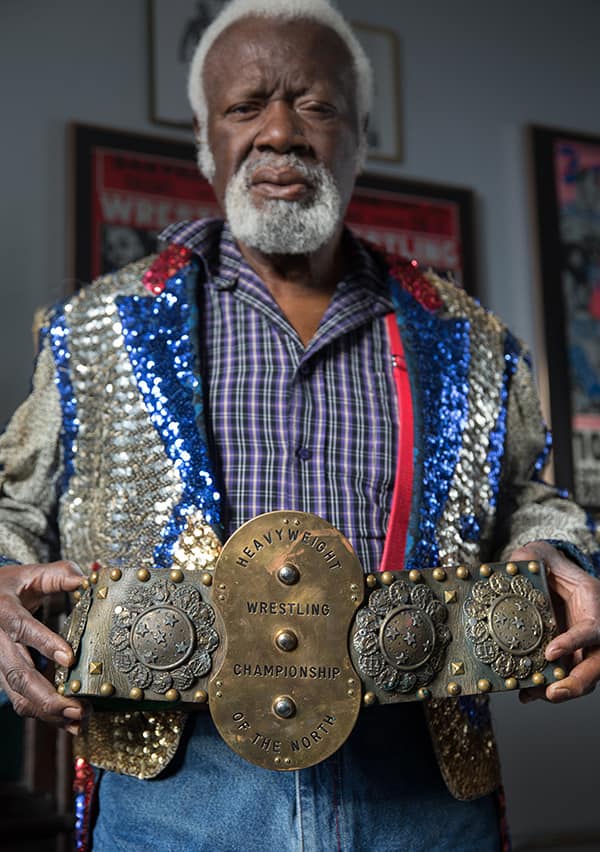 Siki changed the wrestling business in other, less political ways as well. In an age where ring attire consisted of solid colour trunks and black boots, Siki’s were candy-striped. His boots were white, with the backs cut out to show off his calf muscles. (The cut-away boot would be a style The Rock would make famous nearly 40 years later.)

He bleached his hair blonde. He wore sequined robes and Jackie Kennedy sunglasses on his way to the ring. His look had a lot in common with ‘80s wrestling stars like Ric Flair, Macho Man Randy Savage, and Jesse “The Body” Ventura. He was doing it 20 years earlier. He would refer to himself as “the ladies’ pet and the men’s regret,” a line that other wrestlers would borrow over the years. He was a master working the audience and cutting promos on the mic. People like Edge and former WWE and WCW Champion Bret “The Hitman” Hart used him as inspiration when creating their characters decades later.

He also pioneered the idea of being a crossover superstar. Today, we don’t think twice about seeing pro-wrestlers star in movies or make non-wrestling TV appearances. But in the 1960s, wrestlers wrestled and entertainers entertained. That is until Sweet Daddy Siki decided he wanted to explore one of his other passions and cut a country music record. He would release four albums on Arc Records in the 1970s. He would also start DJing in and around Toronto, and still runs a popular karaoke night.

Sweet Daddy Siki made professional wrestling what it is today. He helped train a generation of Canadian wrestlers, many of whom went on to find success in the WWE. He broke down racial barriers, making it possible for Black superstars like The Rock, Ron Simmons, Booker T and Mark Henry to win championship gold. He showed wrestlers of all backgrounds how to be the best kind of in-ring bad guy. He opened fans up to the idea of watching a wrestler do something other than wrestle.

In so many ways, Sweet Daddy was a man ahead of his time, but looking back on his career, he was exactly what pro-wrestling needed.