Politics and war are often the root causes of food shortages in the country, say experts

Throughout its history, Ethiopia has experienced famine — according to one historian, at least one every decade on average between the 15th and 19th centuries. The Great Ethiopian Famine alone, which spanned from 1888 to 1892, is estimated to have killed up to one-third of the population and is commonly referred to as kifu qan or “evil days.”

Drought and pestilence are well-known contributors to food shortages in the country. But experts say these environmental factors aren’t the root cause of Ethiopia’s unforgettable famines. 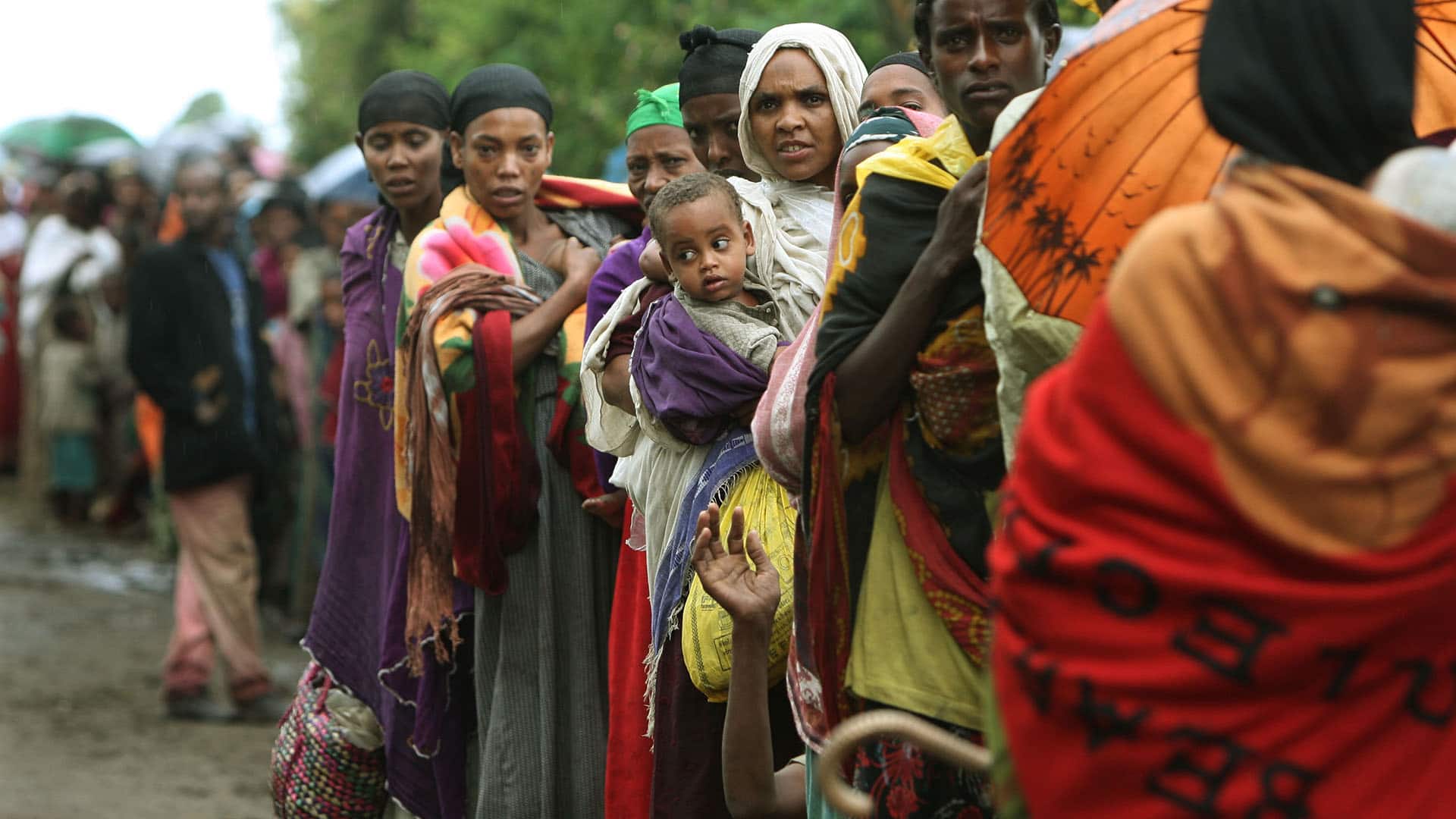 Famine: A tool of war

According to a report prepared by Africa Watch (now a part of Humans Rights Watch), many historic famines were the result of the way civil wars were waged. Sometimes, food stores were seized to feed huge armies of tens of thousands of soldiers. In other cases, cattle and crops were confiscated as a military strategy. These measures degraded communities, making them vulnerable when drought struck. 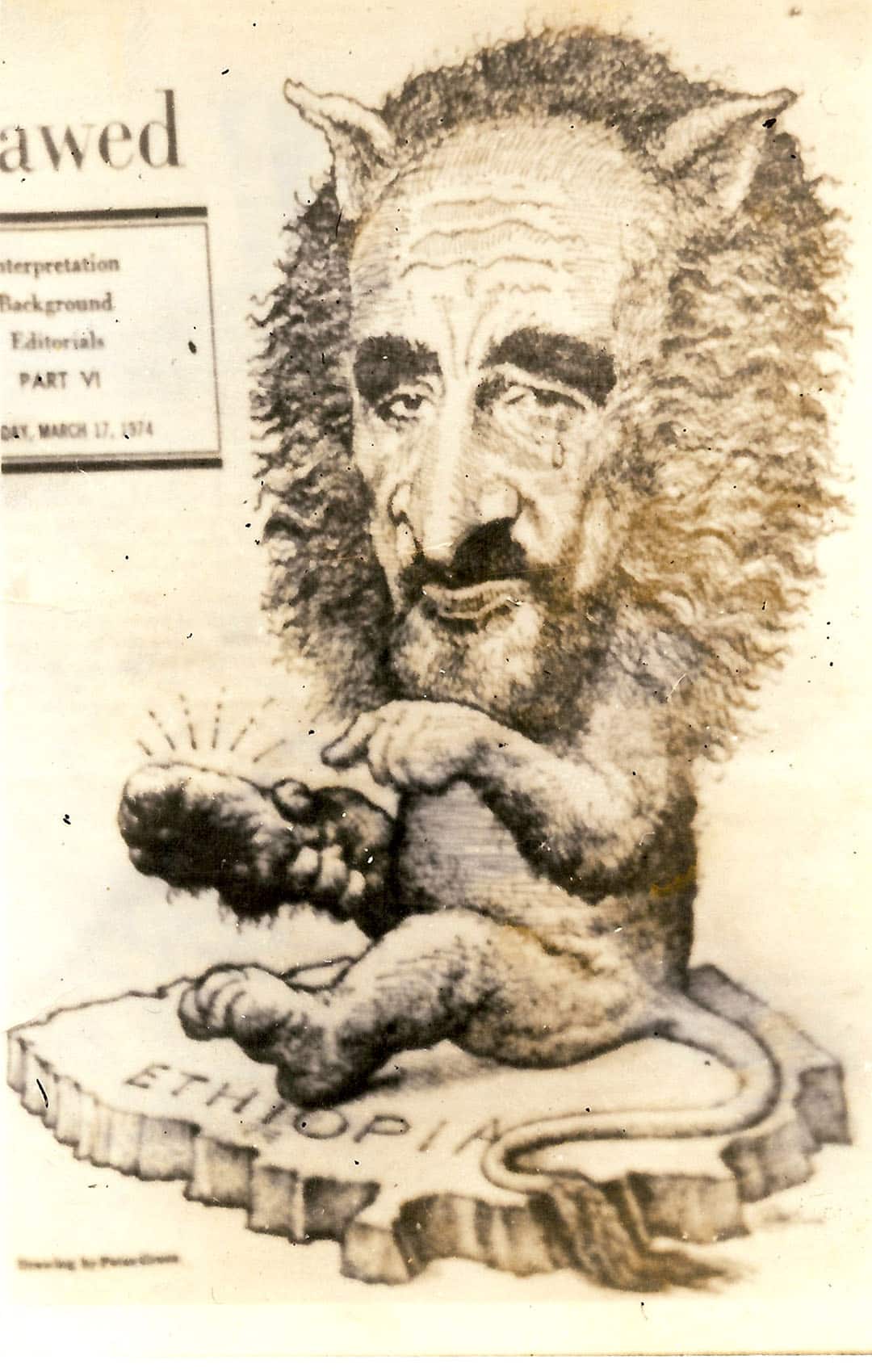 As social and political tensions were building up in Ethiopia in the early 70s, anti-imperialist propaganda, like this postcard, started circulating in the country.

In the 20th century, famine took place in areas where populations openly resisted the regime of the country’s last emperor, Haile Selassie. Uprisings in the northeastern region of Wollo were suppressed by looting, confiscating cattle and stopping the salt trade. In another northern region, Tigray, revolts against the emperor were met with bombs dropped from British aircraft, and many people saw their land taken away.

Both areas were affected by the famine that took place in the early 1970s, which, according to Africa Watch’s report, caused between 40,000 and 80,000 deaths. The cattle, goats, and camels that sustained the lives of nomadic groups in the region also perished from lack of food.

Kibre Dawit, featured in the documentary Finding Sally, remembers how shocking it was to see “skeletons of animals all over the place” in regions that were usually green and fertile, such as Haramaya and Harar east of Ethiopia’s capital, Addis Ababa.

But the capital city was a world unto itself, she adds, and people living there didn’t know much about the famine: “You would hardly notice it. It wasn’t talked about or announced on the radio. Maybe the most [you’d notice] is that the price of the grain would go up.”

The Emperor Selassie first tried to hide the famine, and then, the report notes, accused the peasants and nomadic people of Wollo of harming his reputation by starving. As a result, famine relief was slow to come, but when Ethiopians in the capital discovered the scale of the problem, “it made a lot of people very angry,” says Dawit. 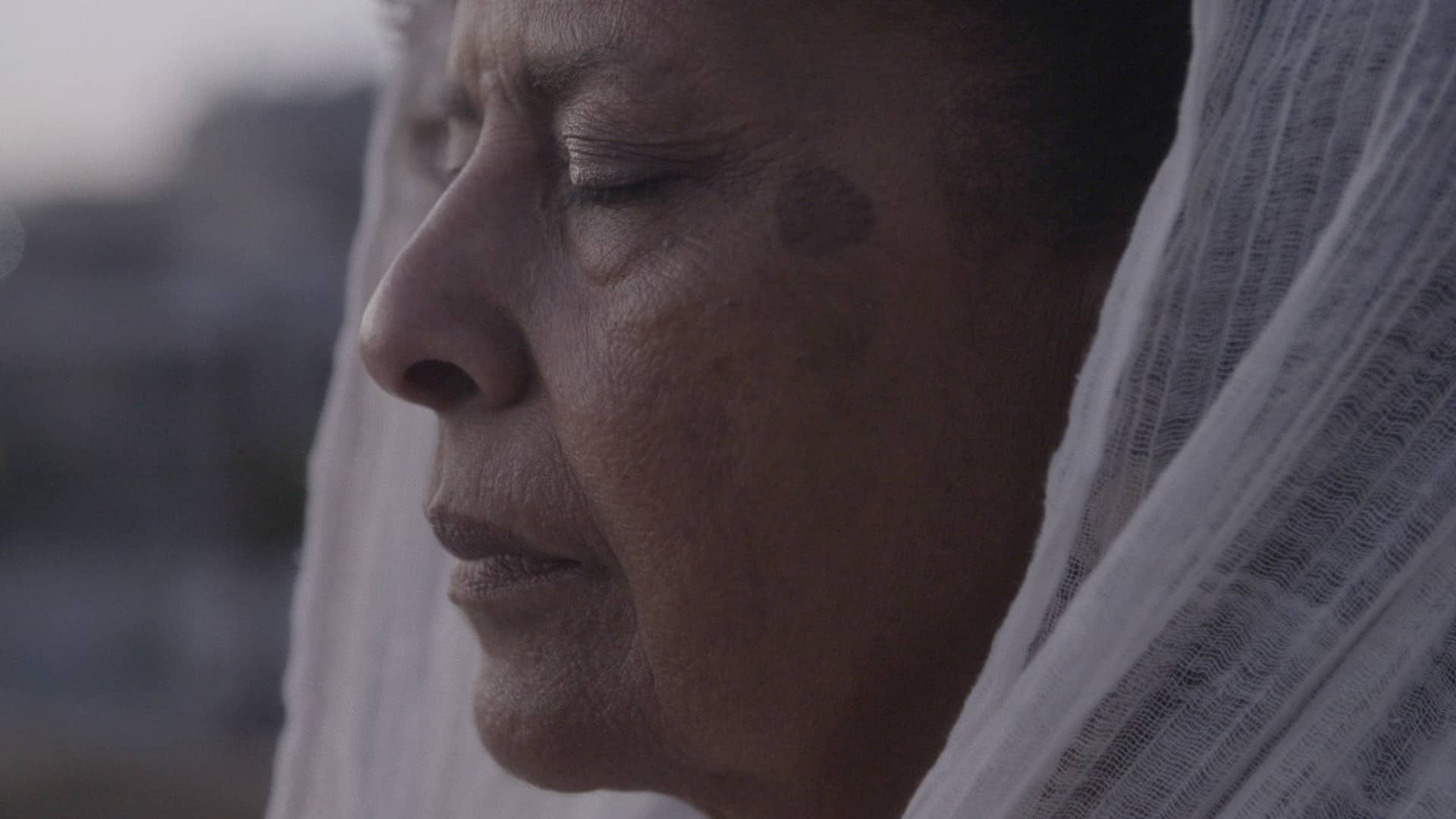 “[The famine] is also what caused the revolution. It was like a ticket for people to revolt. It was an opportunity for the students, the military and people like [my sister] Sally who are already very revolutionary and who wanted change. It gave them the opportunity to speak out and say that this cannot continue.”

The famine eventually contributed to the emperor’s downfall. It became a focal point for the students and middle-class residents of Addis Ababa, who took to the streets in protest against his government.

A decade later, images of emaciated people, shivering from cold and hunger, were broadcast on TV screens across the world. Famine had once again taken hold in Ethiopia, this time in the midst of the rule of Mengistu Haile Mariam.

Mengistu was the ruthless leader of the Derg, a military junta that ruled Ethiopia for over a decade in the 1970s and 1980s. So serious were the impacts of the famine that this time that a minimum of 400,000 are estimated to have died, according to Africa Watch’s research (though the United Nations’ estimate is one million, the report contests this figure).

The famine was famously described by a BBC journalist as “biblical,” affecting up to one-third of the country. And among the worst impacted regions were Tigray and Wollo.

Although the media attributed the famine to droughts that had happened in the preceding years, the real cause of the famine, the report argues, had to do with military strategy. In Tigray, Derg soldiers had waged war against rebels, bombarding schools, markets and villages, destroying grain stores, burning crops and displacing farmers. The Derg’s counter-insurgency strategy was also applied in Wollo.

But the suffering of rural Ethiopians didn’t stop there. After the world came to know of the famine, the Mengistu government began what they called a “voluntary resettlement program,” which it claimed was an effort to help residents leave famine-stricken areas, and was supported by funding from humanitarian agencies and celebrities.

Under this controversial program, hundreds of thousands of people from Tigray and Wollo were moved to unsettled areas in the south of the country. The Guardian described it as a military campaign “masquerading as a humanitarian effort” that was carried out under brutal conditions, with tens of thousands of people dying along the way.

According to Africa Watch’s report, the resettlement program killed people at an even faster rate than the famine.

Although a famine on the same scale as that of the 1980s hasn’t occurred since, droughts have taken place many times over the years.

In July 2019, Oxfam reported that more than 15 million people were in need of food aid in Ethiopia and across the Horn of Africa, following poor rainfall due to a worsening climate crisis. Ethiopia is especially vulnerable to climate change; it’s one of the world’s most drought-prone countries with unpredictable rains. In some years, seasonal rains fail completely.

Yet even when drought is absent, food security remains a problem. The Guardian reports that since the mid-2000s, the government has transferred millions of hectares of fertile farmland in regions such as Gambela and the Omo Valley to foreign investors, and has undertaken massive infrastructure projects.

These developments, in combination with a fragile political climate under the new government of Abiy Ahmed, may not bode well for the future of rural Ethiopians.

“Ethiopia is a huge country and it can feed Ethiopians beautifully,” says Dawit. “But the environment has changed; global warming is affecting all of Africa. We are the smallest contributor to global warming, but we pay the biggest price.”